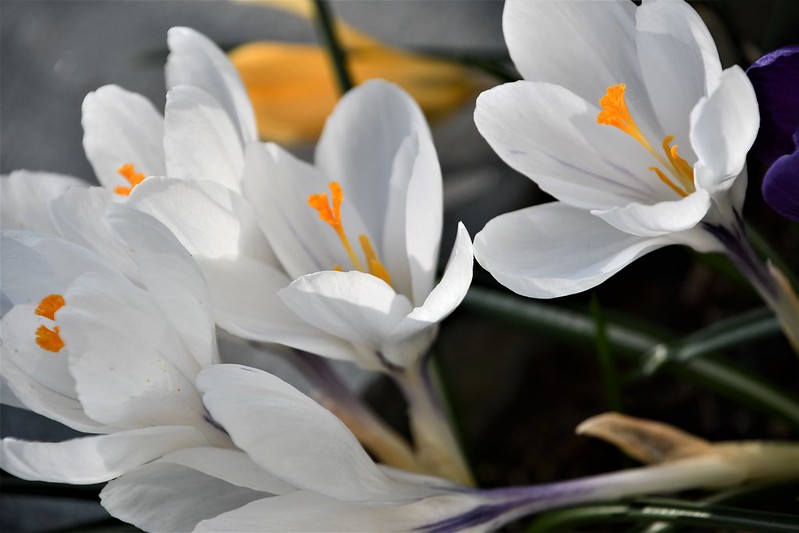 These seem to be competing. 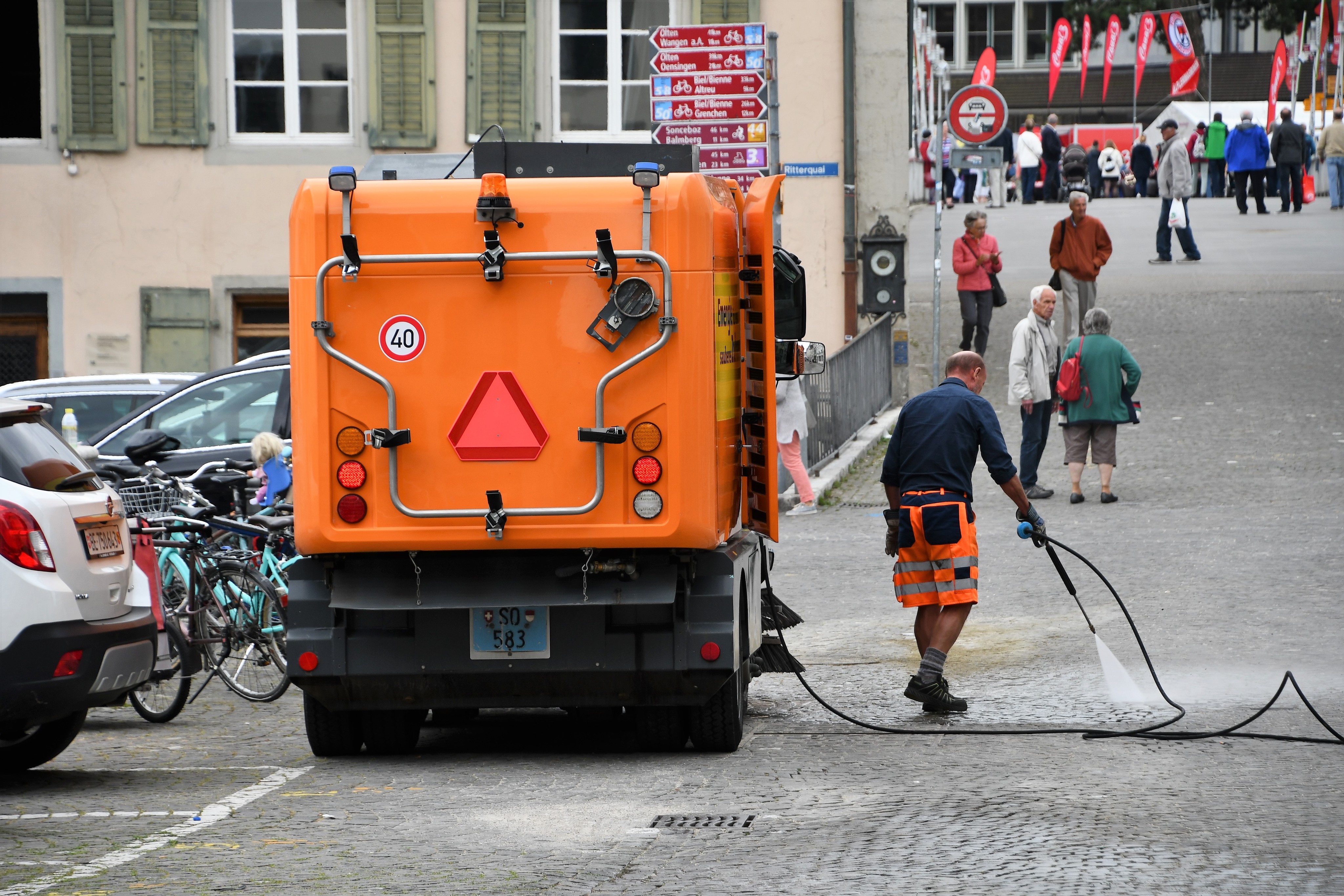 Yesterday were the annual “Cheese Days” in our local town: a celebration in honour of the many cows that are our neighbours. At midday we have our alp procession through the town. Unfortunately I did not attend, as I was busy cooking lunch. However, when I arrived in town our cleaners were judiciously cleaning the roads of the natural bovine recycling process.

The cows moved on to the square in town where they were being presented for all to see. 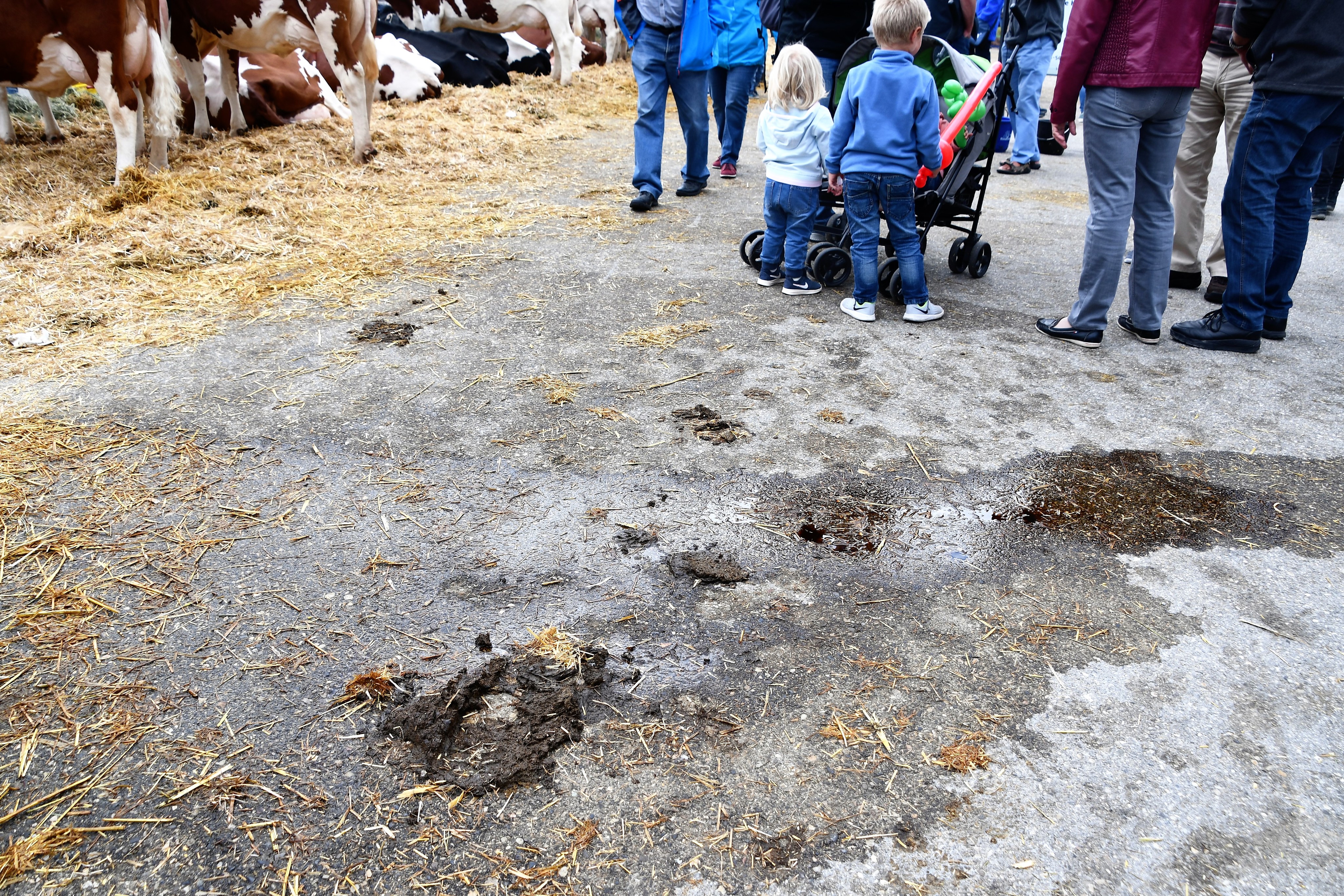 Again they left their traces to prove they were there.

Yesterday the cows took over the town and were treated as the special animals they are. Even cows are thirsty in between after being judged for their beauty and perfection. 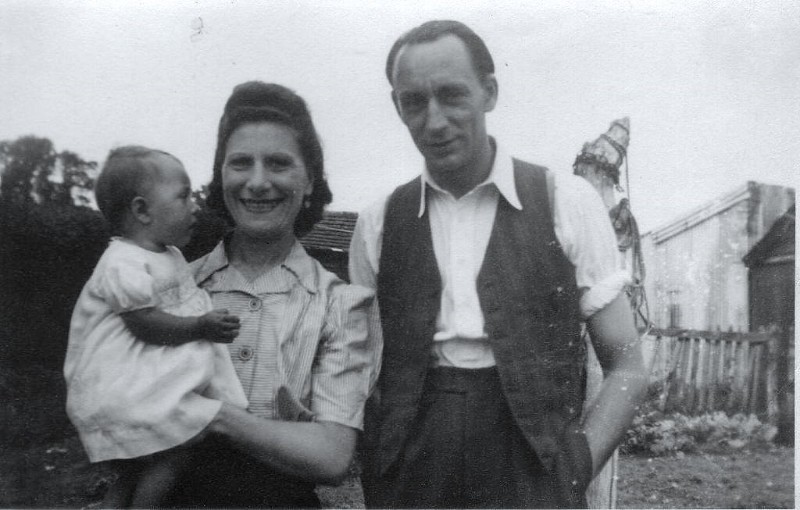 Today I discovered my origins.

This is me, mum and dad when I was still in the not walking or talking age. I suppose about 6-7 months old. I was born in 1946, the year after the war, but not where mum was living at the time. The East End of London, which was a dock area, was still suffering from the bomb damage and the maternity hospitals were full with mums, like mine, awaiting their babies after the men had returned from the war.

My mum would have been one of them, but as the hospitals were  full she was sent to a place called Hitchin to await my arrival. Hitchin is a town in the county/state of Hertforshire, outside  London. As I grew up I realised I knew nothing about this place, and mum knew even less, although she was in a hostel for a month until it was her time to give birth, when she was moved to the main hospital of Hitchin.

We now have computers and I got curious and I discovered that these pregnant mums were sent to a place called Foxholes to stay before the babies arrived. Today I met an english guy in the store with his Swiss girlfriend and we got talking and yes, he was from Hertfordshire, and knew Hitchin very well. He grew up in the area. He told me all about it and even knew Foxholes. After the war it was returned to the church and was a place for nuns and monks etc. but it was the place where my mum awaited my birth. My mum knew absolutely nothing really about the place where I was born.  It was post war days and she had been parted from dad for a month awaiting my birth. He visited now and again. After I was born she returned to London and I remember that she told me my dad almost had a fight at the railway station in London when he was trying to get a taxi for us to get home. He said all the yanks (pardon the expression) were grabbing the taxis and they were paying good money and so he and a taxi driver had a very strong argument. I do not know the result, but eventually he got home with mum and me and mum was really not so well.

As you can see in the photo we all survived and today, after 73 years in another country, it was the first time that I met someone that actually knew the place where I was born. It is certainly a strange feeling after so many years.

A cloudy one this morning, but no sign of rain and it is now slowly clearing. Yesterday afternoon I took a wheelie into town and it was the first time for a long while that I wore my longer version of trousers and not the shorter ones. I even put a light jacket on. Temperatures are getting lower gradually and there is no sign of a warmer Indian summer at the beginning of Autumn.

However undaunted I proceeded into town as I had a target in mind. 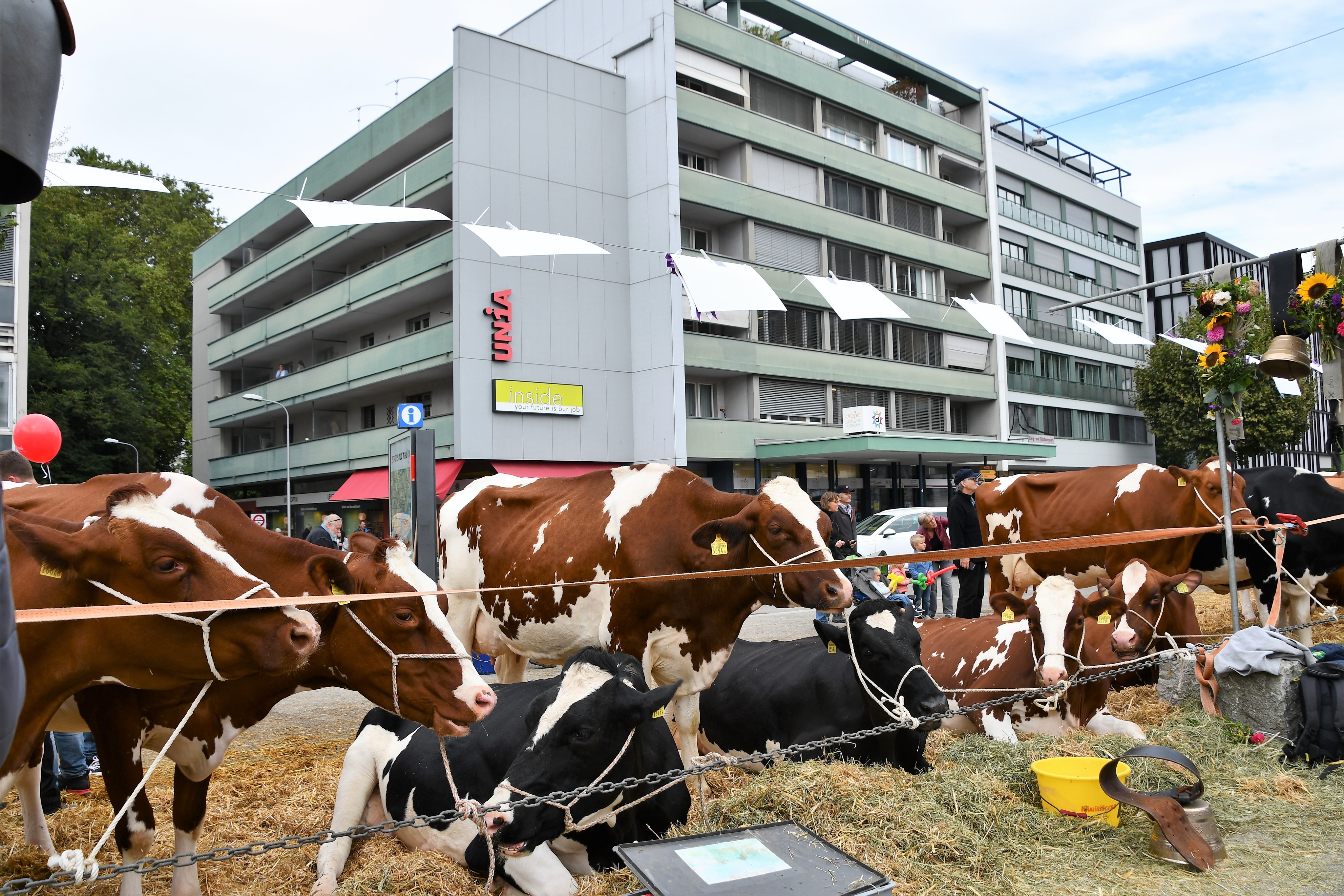 The cows are back in town. Once a year we have our so-called cheese days featuring our cow population as the stars. One of our large market squares is converted for the purpose into a cow home. The local farmers bring their best cows, washed and brushed and ready to be judged as a winner. Many are already winners and proudly display their various certificates. We have had this festival for about 10 years and it gets more popular every year.

Of course Swiss cows are the best looking cows without a doubt and are experts in producing milk for the Swiss cheese, although me being a Brit, I still prefer a good piece of cheddar against an Emmental cheese.

There were many sellers of cheese at the occasion and the whole place had a smell of cheese mixed with cow.

We also have sheep, but that is more a farmer’s hobby than a main occupation. They maily graze up on the slopes of the mountains or where the farmer might have some spare land. Here are a few prize examples, not the sort you usually see roaming around.

There were many visitors and I had to weave my way through the people in my wheelchair, but I was not alone. There was a small group from the local senior home in wheelchairs, although not self propelled like mine and that had their helpers to push them around. I had fun looking around and taking photos of the cows. It made a change from the usual photo tour that I make. 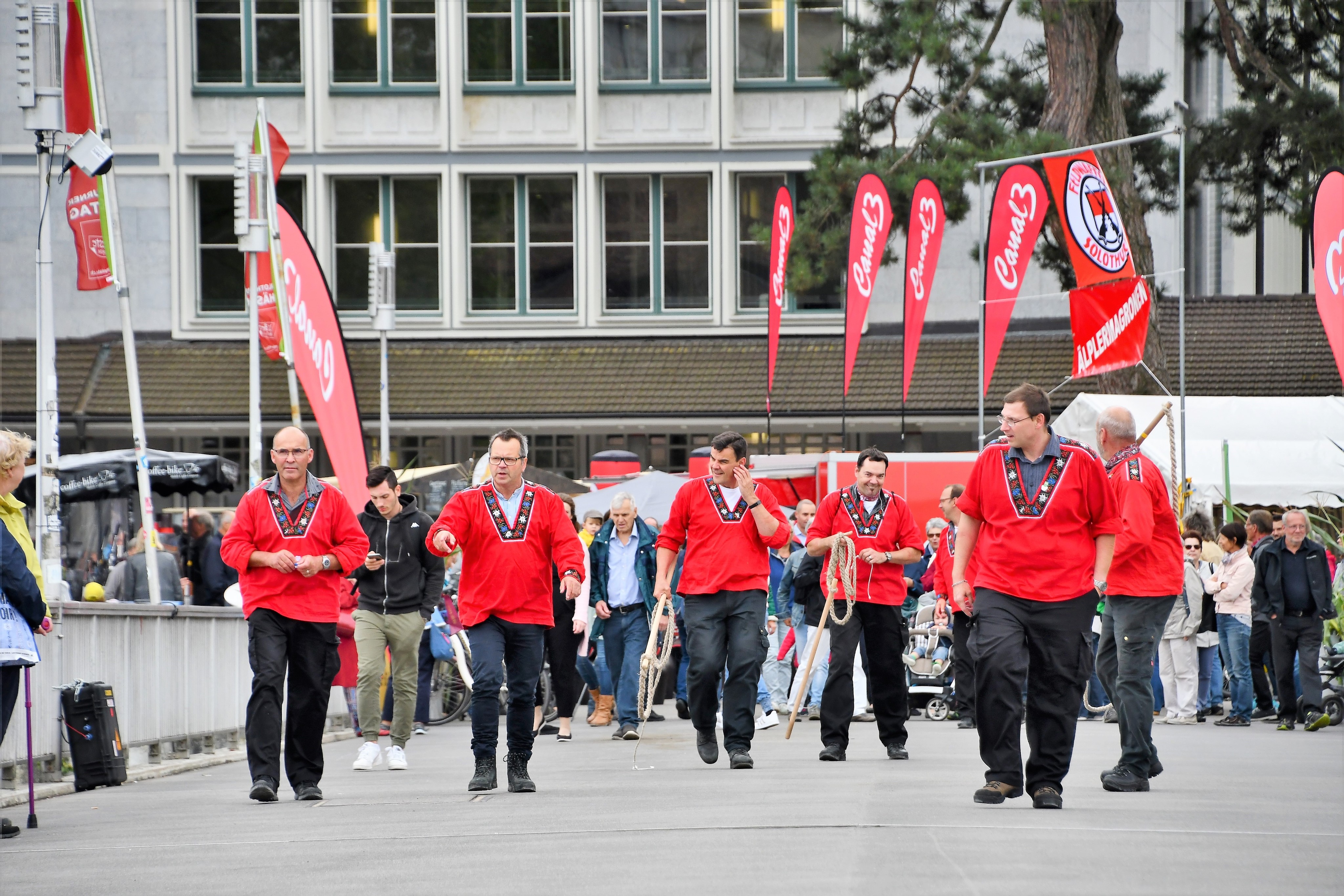 We also had a little bit of folklore at the exhibition. These guys were marching onto the bridge for a demonstration of geisslechlöpfe. You don’t know what that is? 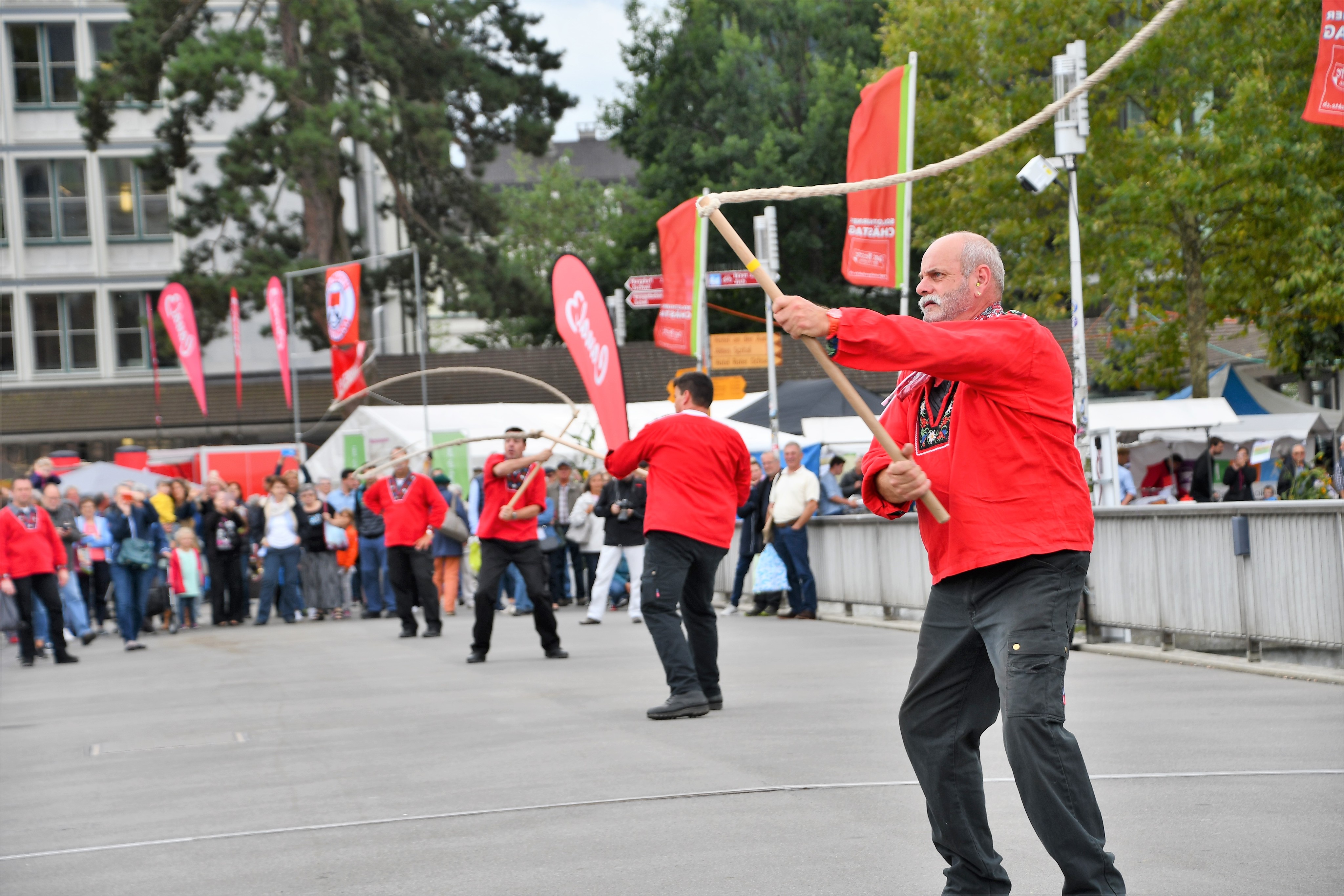 They have knotted whips and they make a loud cracking sound as they cast them around their heads. Apparently it comes from the olden days when it was done to expel the angry spirits. 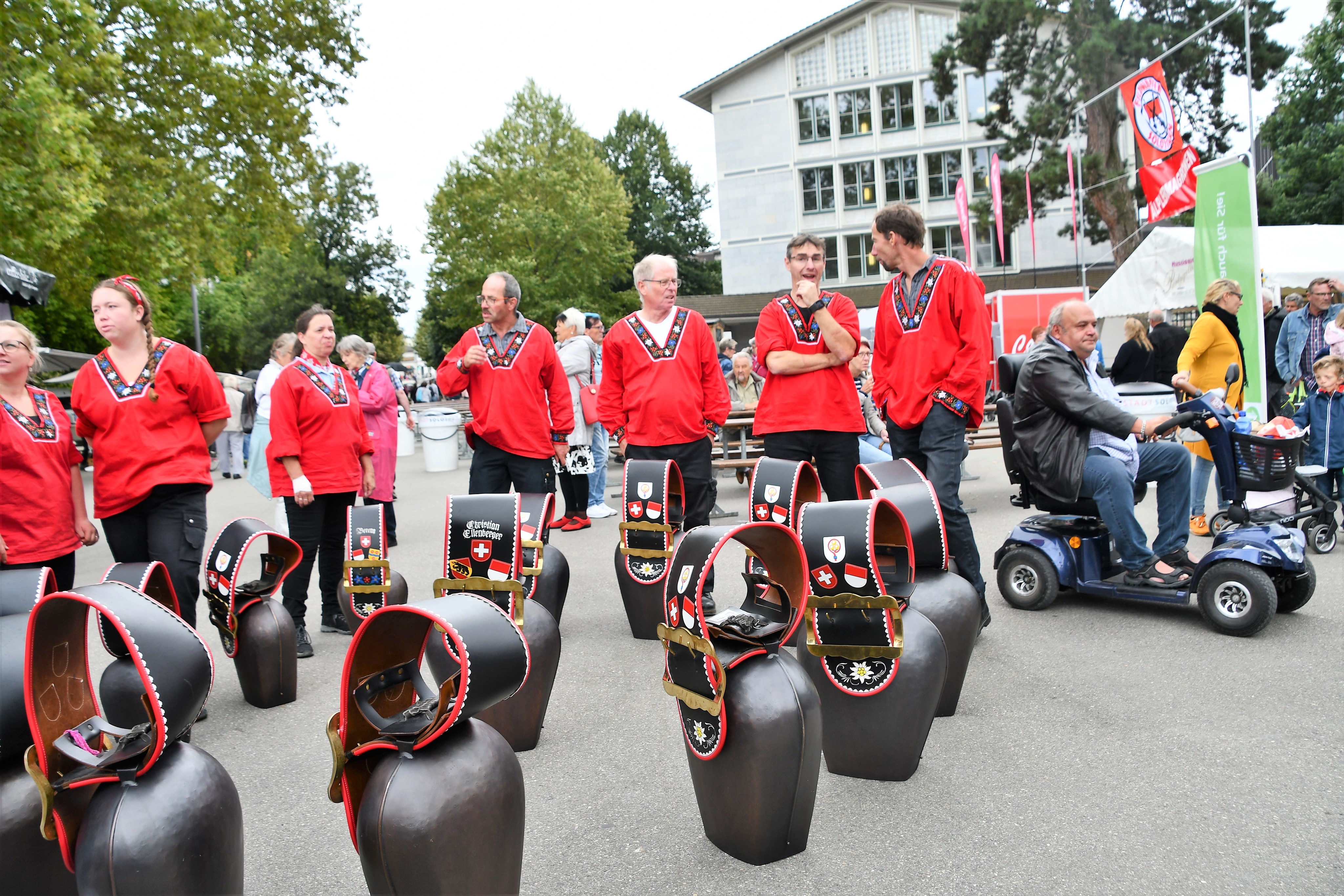 To back up the expulsion of the angry spirits there were also a groups of Treichler with their oversized cow bells. They march around and swing the bells making a loud noise, enough to expel the good spirits as well, but for me it was a fascinating experience with my British roots.

All good things come to an end and eventually I made my way home along the river bank leaving the mooing and bell ringing and whip cracking behind me. I like paying such visits in town, something I never had the time or opportunity to do in the past years. Mr. Swiss being Swiss was never so enthusiastic about such events and I was busy being a housewife and did not want to go on my own to such an event. Today things are different and I often break out for such experiences. Mr. Swiss enjoys seeing the photos afterwards.

I had quite a busy day as in the morning I took Mr. Swiss to his last eye examination for a while as both eyes are now operated. In a month he will be fitted with his new glasses when the eyes settle down, but there is already a vast improvement in sight for him. Perhaps I can now return to a normal daily routine. Life has been quite hectic and full of stress lately. Another event is that my grandson will be 2 years old today, time goes so quickly. Son No. 2 tells me he now makes the first attempts at communication, most words are even decipherable. As he is coping with two languages at once (Swiss German and so-called high German) he will have a bit of a mixture at the beginning.

And now to move on as I have a week-end shopping today and a few other bits and pieces to see to. Enjoy the day, it will soon be week-end. 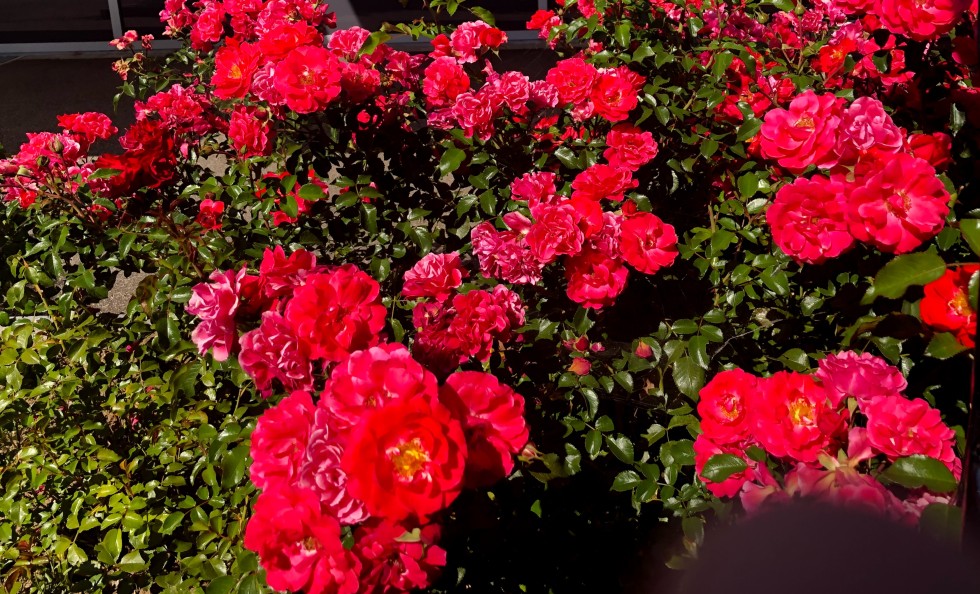