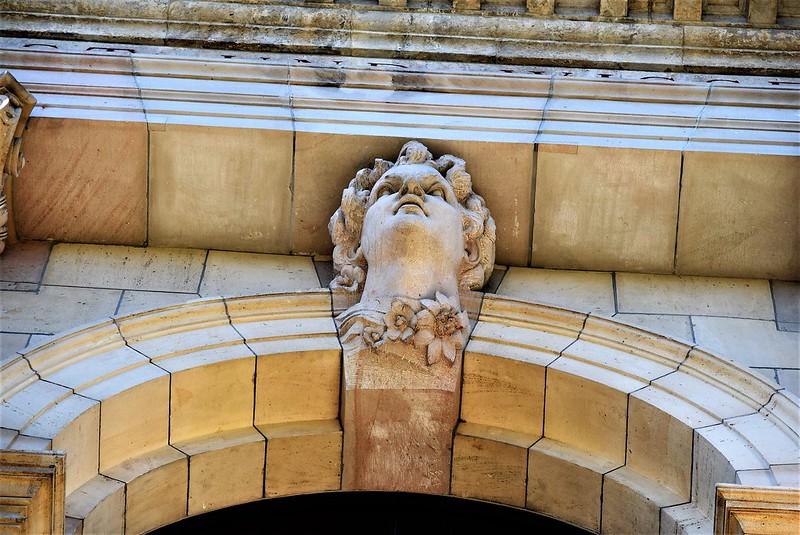 The sword was still sharp, despite the heads that had rolled that day. Its blade was dripping red with the blood of its victims. How he was tired of this war, but he knew, if it is not the other, then it will be me. He felt a sting in the back of his neck and another head rolled, but this time it was different. He was not looking at a stranger, a number in the crowd of men coming towards him, no. It was his head looking up, with eyes that saw no more.

An arch appeared decorated with another head, this time of stone. The head was watching him approach. The closer he got the more details he saw. A head, perhaps female, with curls and bearing a necklace of flowers. And the eyes: there was something evil in those eyes with its empty pupils. Something was drawing him, pulling him and then he saw the door, the entrance.

“We are ready for you” the words resounded throughout the barren landscape. It should have been cold, as cold as the ice fields to the right and left of the monster, but he felt no cold, felt no warmth, his body was numb.

“Is this hell?” he asked, his words echoing through the emptiness of the air.

“Hell is where you find it” spoke the head on the door.

“Do you think you deserve hell?” was its question.

“I found hell on the battlefield, killing and decapitating my antagonists. It was them or myself.”

“And now it is you. Your life is terminated. You now meet the final test.”

“My life has been one test? Do I again endure the horrors of combat, of killing men that were strangers. Their only crime being that they worship another god, or speak a different language.”

“Here the killing is finished. Death is conclusive – there is no return. Look through the open door.”

The door became misty and then it cleared. Then he saw once again the battlefield, but there was no action. Just bodies laying one by one, the grass coloured red from the bloodshed of the battle. He looked closer and knew something was wrong. There was a large pit dug by the prisoners of this war, those that lost,  and the bodies were being collected and piled into the pit. He was startled as he saw a head that he recognised, his own face with its unseeing eyes and mouth that would no longer be able to kiss his wife in a warm embrace. He then realised this was his end in a war he never wanted; a King who wanted more, more land, more wealth, and above all more power. He was just a small piece of the machinery turning to satisfy his King, but his King was wrong and he lost.

The scene changed and he saw his wife and children, marching along a road surrounded by other victims of a never-ending bottomless war; the children crying and their mother hugging them close. He again looked up at the figure,

There was a change. The expression on the head had become softer, the eyes also had tears as she looked at the soldier.

“The door is open, enter, you will now find the peace you have been craving for.”

4 thoughts on “FOWC with Fandango: Raw”