There are plugs everywhere
One is for the router
Do not ask which one
It is all for the computer
One day I took the hoover
and decided to have a clean
We then became wireless
It was a very sad scene
I must have moved a wire
Or detached a good connection
The screens all went black
And lost the main direction
We really had a problem
And had a very  loose cable
Mr. Swiss got down on his knees
To try a make it stable
Suddenly I found the problem
When I lifted up the rug
The vacuum cleaner had done the job
and managed to pull the plug 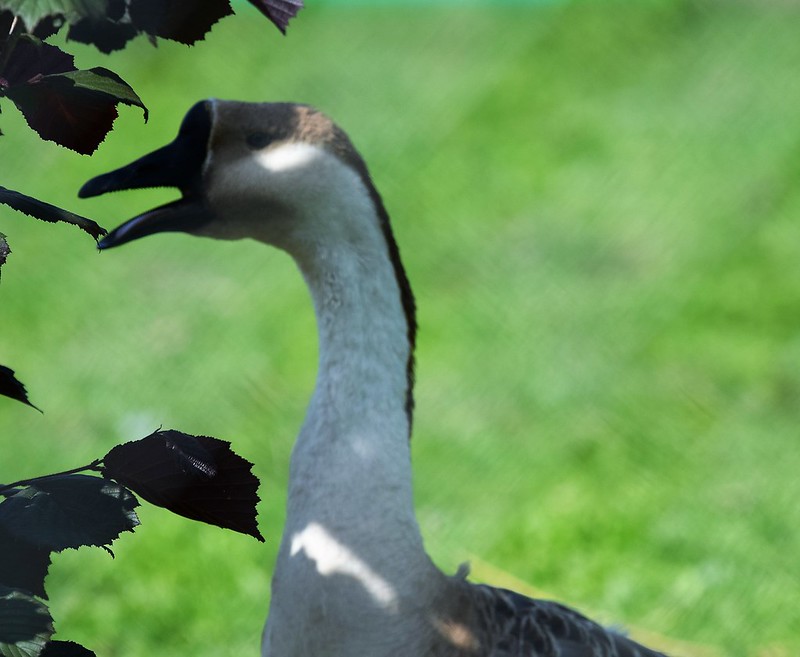 I got real life agitation this morning, and I think the agitator must have been a lookalike of this silly goose. It all began some time last March, or was it April. Difficult to say, it was so long ago. I was at the dentist with Mr. Swiss and decided it was time for me for a check up. It had been a long while, I had no toothache, not even dental problems, but today we are guided by the golden rule to have your teeth checked at least once a year. My dentist even told me I should report every 9 months, being diabetic etc. I asked for an appointment at that time and was surprised that the earliest opportunity would be in August. In the meanwhile much water has flowed under the bridge, although I had not forgotten the appointment, but when the date was made for Mr. Swiss eye operation end of August I checked on my dental appointment and discovered it would be exactly on that day.

I called the dentist to change the appointment. Each time I call I have a different person on the phone. The practice was orginally run by the father and he treated both myself and Mr. Swiss. He is now retired and his son has taken over, a very capable dentist and Mr. Swiss is one of his patients, looks like the VIP treatment. I was redirected to one of the assistants, also a very capable dentist. But who sees a dentist today. If you are in pain and lose a tooth etc. then you are a case for the dentist, otherwise your checkups are done by a dental hygiene person, which is usually a lady. It seems that dentists can fit you in in a month or so, but not the hygienists, the are fully booked out for at least 3 months.

This morning when I called to say my appointment would not be possible, the lady said I would have to wait at least 3-4 months for a new appointment. I bit into the sour apple and told her to give me a new date. I got the first Monday in December. Mondays are not possible for me and after a discussion she said 12th December at 3.00 in the afternoon. I asked the lady what has happened to the regular important checkups at the dentist. They no longer exist and I am now waiting for a very long time. Her answer: Sorry,  I have no time to discuss I have other patients, goodbye.

I was not only agitated but very much annoyed to be brushed off in that way by someone I would be old enough to be her grandmother. Needless to say Mr. Swiss will have a few earnest words with his dentist on the next visit. We have paid many thousands of Swiss Francs to have our teeth dealt with but for the silly goose on the telephone, this is not important.

And it is a very wet morning and still raining. I even had to shelter my kalanchoe plant under the table as they do not like too much rain. It is a very quick hello this morning. My cleaning lady is here very busy and I have just finished freshening up my windows. They are not so dirty, just rain splashes everywhere.

My insurance man will be calling in half an hour as by law I have to make an insurance for my cleaning lady in case she has an accident whilst in my employment. I also just called my dentist. I made an appointment for a check in March and they could only give me an appointment for this month. In the meanwhile it is the day when Mr. Swiss will have his eye operation, so no chance that I have time for have my teeth cleaned and I called to postpone and she tells me I will have to wait another three months. I reminded her that this was slowly becoming a joke, as we are always told it is important to see the dentist at least once a year and I never get an appointment in time.

She became quite unfriendly to say the least and told me she must go as she has other patients to deal with and I got a new appointment for December. This is ridiculous and I was very annoyed at her attitude. Luckily my teeth seem to be OK, and all I need is good clean up and check.

And now I must begin to cook and am really pressed for time. See you later if things get a little less stressful.

In the meanwhile I will also bury my head to avoid things that are determined to bother me this morning.