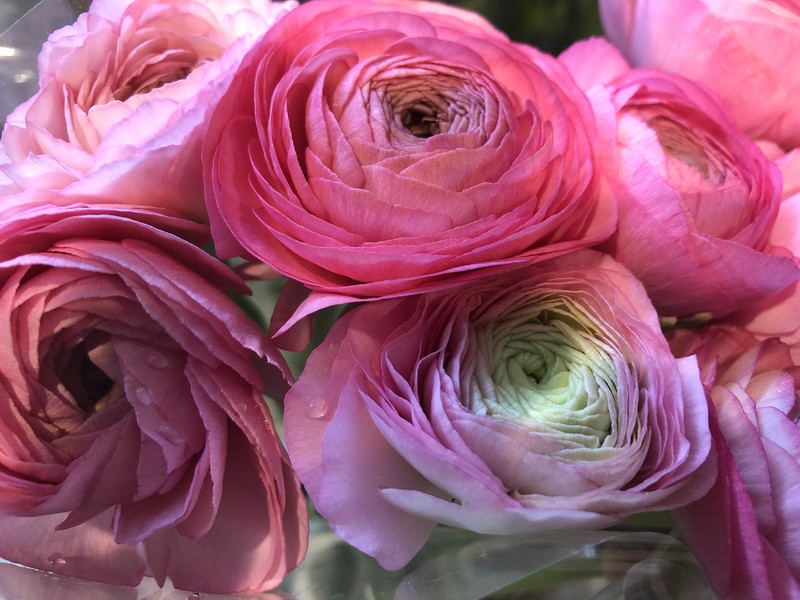 Such lovely flowers, so I decided to plant one this year in my raised bed, but no success. For a week it had flowers, and then died. Perhaps it might return again next year.

One thing has always bothered me. Why did the chicken cross the road?

I am still trying to work this one out.

You can see it is a little brighter on the left side, because that is where the sun will eventually arrive. This is the West side of the apartment. The sun has already appeared on the East side.

Yesterday I escaped again into town. On my entry I looked up to the statues on the St. Urs cathedral and saw this ladder leaning on the building. I was wondering what the reason was. Perhaps the birds had been extra active with their recycling system and they decided it was time to clean it all up a bit.

Otherwise I was confronted with this when I arrived in town itself. One of our alleys, or streets perhaps, had been transformed.

Various inflatable arches and a bed of plastic had been placed and filled with water. At the top was an organised queue of the younger folk dressed in their bathing clothes and carrying whatever they had that was inflatable: mainly a swim ring. There was an organised queue for those that had bought their admission ticket at the entrance and they could float down the waterway at their pleasure. I am sure it was an enjoyable ride- I know yesterday was the day of the river Aare swim, where the swimming adults make their way along the river on a planned journey, a sort of competition to see who is first. I was down at the river, but there was no-one there, just the marked route. The swimmers had already departed on their way, and so they probably organised this pseudo Venice look in town for the kids.

It was interesting for a few photos, but I was a little annoyed as I was in my wheelchair and I always take the route along the road. The sidewalks are too high for a wheelchair to climb and descend and the street was blocked with this river lookalike. As I am in the minority I have to adapt. It meant wheeling through town, making a turn towards the river and wheeling back to get to the bottom of this watery lane.

Eventually I made my way home, as apart from the water slide there was not very much happening in town. There seemed to be a swan congregation on the river, they were everywhere. Must be one of their group excursions before late summer becomes early autumn.

I saw no cygnets, they were probably in a cosy place somewhere with mum and dad. This seemed to be an adult gathering. they are really beautiful birds and so graceful. Only on land they have a little problem with their big feet waddling around.

Otherwise it was a pleasant day weather wise and I spent it out on the porch when I returned with my computer dealing with a few blogs. In the evening I uploaded my 50 photos which has no become a major task for me. I have them on two sites on the computer and on the computer itself, as well as an extra disk.

And now another Sunday with various things to do. Not really, I just like to do them. I cannot just sit around and enjoy the view, I feel so useless. I have already baked up my half baked platt bread that I get in the store on Friday. I have a nice quick meal of steak today so no big cooking venue.

And now I will make my way to the shower. Enjoy the view on the Jura mountains where you can see the TV or radio antenna on the top (am not sure which). Have a good Sunday and will see you later.