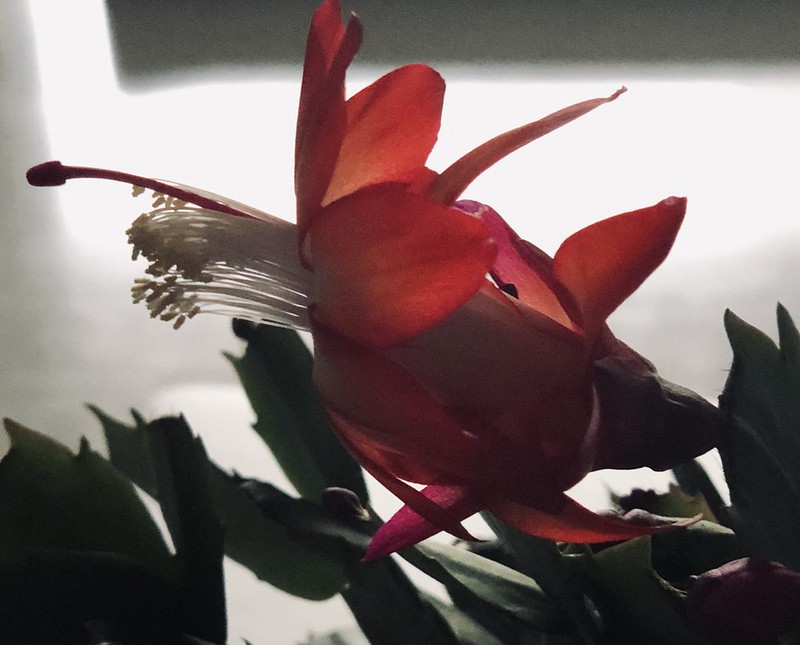 Commonly known as the Christmas Cactus. I know I am a little late or early, but always a delight to see.

There they were in the middle of the mall surrounded by shops and soon had a crowd waiting and expecting. I was one of the crowd, but arrived probably at the wrong time as there were no lucky numbers left for me. There was a machine with moving parts, something like the TV lotto machine and suddenly a ball arrived in a slot outside the machine.

“No. 32” said the man and a little girl walked up with her paper showing the No. 32. Se was given a sealed box with a red ribbon. Afterwards it was No 24 and a lady came forward to claim her prize. This time it was not a sealed box, but a bottle of cleaning liquid. When a guy had his lucky number arrive, I think he was a little disappointed when he was given a liquid soap dispenser. I had then lost interest to have a lucky number. Afterwards I was offered a free bag of popcorn, or could have a free candy floss from the machine. It was really my lucky day, I am diabetic so no sugar and I never did like pop corn.

Some days are too random for my taste.

He was perfect for the job.  The kids at the circus loved him. He would pick them up with no problem, although the parents were a little worried that he might drop them, but it never happened. When they erected the circus tent he was ideal for heaving the long poles into position. His mother was always worried since it happened.

The factory was the main work place for everyone in town. No-one really knew what they were producing, something to do with fertiliser for making plants bigger and better.  It was the place where the sunflowers were as tall as the houses. It was after the accident happened that Jeremy had problems. He was out in the garden when the cloud arrived. The only one in town, as the others were all watching the match on the TV, but he was never interested in football.

And the next day he was getting ready for school.

“Come on Jeremy you will be late”

“Got a problem mum. My trousers are too short. They look silly.”

“Stop making up stories Jeremy, just because it’s sports day and you don’t like playing games.”

And that was the day when Jeremy began to grow. Actually it was only his legs, the rest remained the same.

Eventually he even had to leave the circus, he loved the job, but they were having problems with organising a caravan for him. They had joined two together, but even that was not long enough to accommodate his legs when he laid down to sleep at night.

But for everyone there is a solution. Jeremy always loved animals and now he is working in the zoo. He is responsible for the giraffes.

One of those interesting cloudy mornings today and since I took the photo an hour ago it has began to rain. Nothing dramatic, but enough to tell me I do not have to water the garden today. I do not mind the cooler rainy days in between. Sometimes the heat can be just a little too much. As soon as the Summer arrives with all its benefits, I begin to long for the Autumn days with their colours.

I so wanted a white rose this year, in a pot. I found one some time ago, but it was an apology for a rose, very small flowers and nothing spectacular. I did care for it, but the buds shrivelled into little yellow formations and eventually it died. And then last week I saw my local store was advertising potted roses with large flowers. They had them in various colours at a reasonable price, but of course I chose this white one. I am hoping to plant it in my raised bed later when it stops flowering and hope it might grow into something special.

The flower it has looks good and there are many buds on the plant.

Otherwise nothing big happening at the moment. Yesterday was the national Swiss day and we heard the noise of the fireworks already in the afternoon. It increased during the evening with continuous banging and pops and even when I went to bed I was still serenaded by the noise, although it did not stop my sleeping. My cat made herself comfortable inside on the settee and I think she slept throught the whole cacophony.

Another surprise in the garden. My gardener lady seems to have a love of sunflowers, at least I think they are, although the mini version. They are here and there in my flower bed and full of buds at the moment, although these seem to be perennials, so might be just normal black eyed susan, which would be quite good as they will be back next year.

And today is again Friday. How the weeks go past quickly. It seems only yesterday I had to plant a week-end shopping list, and now yet again. Luckily No. 1 son is not so fussy what it is, a long as there is enough on his plate, and Mr. Swiss and I usually find an idea of what to eat somehow.

We was having a milk problem lately, although the only person that has milk in our family is Mr. Swiss in his coffee. I usually buy long life milk, 4 liter together. In the last couple of batches I bought I had to thow away at least two liter per batch because it was kaput. I told the lady at the supermarket but she naturally needed proof. No problem I took a couple of photos of the open box of milk and when I threw it away. She said they had no other complaints, but it could be due to the hot weather. Generally I only put long life milk in the fridge when it is open, but now I have begun to put all the 4 boxes into the fridge. Luckily I have a second fridge in the basement room for my MS medicine injections, so enough space. Our local supermarket is excellent with complaints and I promptly got a pack of four liter milk free of charge as a compensation, which just about covers my loss.

My honesty plant is really developing well with its button similar flowers. And now to go further, I did hug the bed a little longer this morning, so should give myself a push to do something useful. It’s Friday so I hope you will have a good week-end in front of you. And now for the attack of the hoover, what  a wonderful weapon. No animals are harmed in its operation, just sucked in.