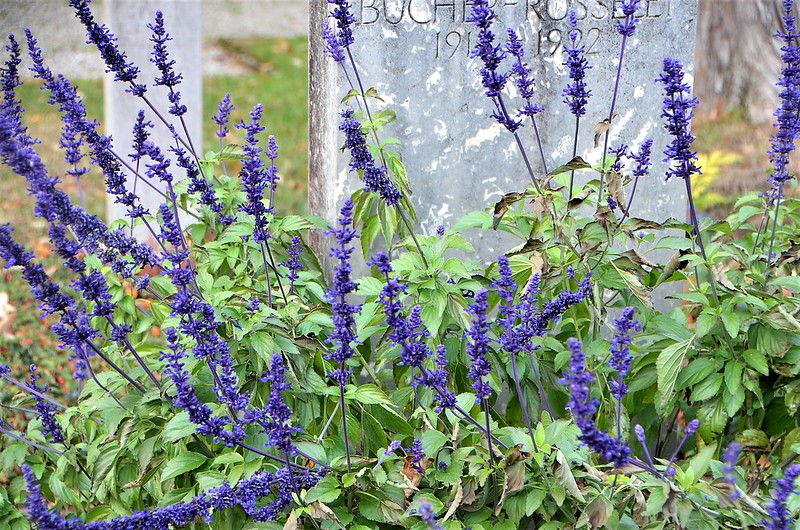 I am not really sure what this is, but would tip on some sort of wild sage, although my plant finder tells me coleus. Whatever it is, it was flowering nicely in the local cemetery.

Summer is here and cooling down seems to know no limits. I was  wheeling home in my chair along the river and saw this group of youngsters gathered on the bridge. I was intrigued and so waited a while (with my camera in hand of course). This young lady had gripped something looking like part of a trapeze and I was curious to know what would happen next.

She took a jump and was then swinging above the water surface suspended from the bridge. She was determined to do it and she did. After enjoying her flight she released her hold on the trapeze and jumped (fell?) into the water.

After looking at this photo I was not sure whether it was a mermaid or just a young lady. The last I saw was that she had climbed out of the river and making her way again to the bridge. Some people are really determined.

I had my own exclusive entertainment yesterday afternoon whilst I was sitting at my desk with the computer. I looked out into the garden and a peacock butterfly landed on my buddleia. One of the reasons that I always have a buddleia bush in the garden is also their alternative name of butterfly bush, and they really are a magnetic attraction. I watched this butterfly and realised it was not in a hurry to go, so I decided to strike whilst the camera was hot and see if I could get a little closer for a photo.

Success! They are so beautiful butterflies with their blue design on the wings. This was my extravaganza, a private performance just for me alone. I am hoping that it will return again today.

Just blue skies at the moment and temperatures reaching 35°C during the day, which is very hot. The second round of the heat wave has arrived, and not a very nice one. I did not realise this when I embarked on a wheelie yesterday afternoon. I am now getting a wheelchair sun tan. One advantage is, and the only one, is when I can speed along and feel a slight breeze in my face.

It is now harvest time for the first crops of wheat. Last year this field was full of sunflowers for a sunflower oil harvest and this year it was wheat, surrounding one of our chapels.

Once there were hay stacks or bound groups of hay and now it is all done by machine, leaving neat little rolls to be gathered up by the famers.

I wheeled on into town in my chair and entered our Bieltor arch. It was not expecting to see crowds and so it was. In this heat only fools  like myself venture out, but I was a little bored stuck at home. In the morning I had the cleaning lady, she has now finished her work for the week and there were a few things I wanted to deal with, but our lift was not working so I decided to make a nice afternoon and catch up on some photos.

I crossed through town and saw this guy cleaning the front and windows of our apprentice school building. Now the time was ideal as it is school holidays. It is really now the lazy days of summer, even the local newspapers have nothing special to report.

It is a funny world we live in at the moment. France has a president married to a lady old enough to be his mother (although that is his problem when she is 80 years old and he is just approaching retirement at the age of 65 if he ever retires). Then we have Mr. Trump (president? no he does not deserve the title) and the less said about this person the better. Great Britain now has Boris Johnson, the new British prime minister. Being a Brit it is interesting to see how this blond haired cartoon figure will manage to lead the country. He did manage to introduce the bicycle stations to London to relieve the traffic and …. no idea what great feats he achieved otherwise. Something about leading Britain out of the EU, an absolut Brexit person. People have began to compare him with Trump, although I see no reason why. All the British immigrants entered many years ago from the crown colonies and have british passports. Other immigrants now come from East Europe and as most of the countries there are from neighbouring countries, he will have a hard job to get them out if he wants to. Great Britain is an island, so no need to buld walls. I think Larry, the cat who lives at No. 10 Downing Street, will not understand the world when Boris moves into the prime minister’s office.

But I am not a politician, write about my travels through my local world in my wheelchair, although today I will be taking the car to the local store to replenish my kitchen cupboards and fridge.

I saw these sunflowers on a table outside one of the chapels as i was wheeling passed, so I hope they brighten up your day.  I will now brighten up mine but tending to the apartment with my household equipment, but first of all clear away my breakfast articles and have my daily shower. Just imagine I am sitting at the computer still wearing my nightdress, a prerogative of the golden oldie population. See you all later.