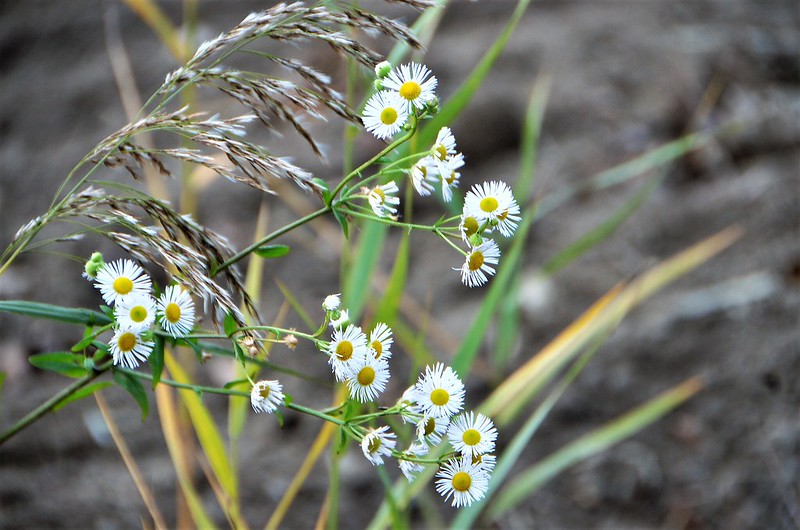 Often the wildest flowers are the prettiest.

Some might say he has a raspy voice, but for me he is OK. His voice expresses the atmosphere of the songs he sings. Tom Waits is one of my favourites.

This morning I am really later, but sleep seems to take priority. Now I am up and ready to go, not quite, but am doing my best. Yesterday evening it began to rain and I was not sorry. It saved me the bother of watering the garden and a rain shower is always better. I noticed that temperatures had dropped, although for me it was quite refreshing.

I even chanced a wheelie yesterday afternoon, but this time into the country part, up to the castle on the hill and through the cemetery where I took this photo as I crossed one of the bridges. And then something special, for me, happened. I was walking down the hill from the castle and there were two young ladies walking in front of me. They both seemed familiar and suddenly one turned, saw me, and made an exclamation of surprise, as we did know each other from a long time ago. The other turned and there I was more surprised, as it was someone I had worked with for many years. I did not realise they knew each other, but they grew up in the same village and were friends, just taking a stroll around my part of the world.

We were all so pleased to meet again.

Memories were caught up on and of course a few selfies were made to celebrate the moment in time. They said they didn’t mind featuring in my good morning blog so here we are. I think we were on the path for at least half an hour together. They live in another village, about 10-15 minutes by car, and it was a complete coincidence that they were in my part of the world on this afternoon at the right time. Life can be so full of pleasant surprises. I was sitting in my wheelchair so that is why I look a bit smaller than the others and of course I am a few years older.

i wheeled on hoping to get a few shots of some chickens and other wild life at the farm, I had not been there for some time and it seemed to be a bit forlorn. The grass and wild flowers had been allowed to take over and there were only a couple of chickens wandering around, although there were probably more hidden in the vegetation. I saw a couple of geese in the background. I was a little disappointed, as photo opportunities were not very good. The movable chicken coop had been moved some time ago to a more distant part, although I have the feeling that it is now time for the chicken changeover. They are probably no longer laying so well, and will be returned for a new batch. So is the life of a chicken it seems.

Otherwise the wheat is growing in the fields next to the castle and beginning to ripen. The clouds were also showing themselves from their best side. Eventually I made my way home and spent the evening uploading my photos. I now have them on two albums in the computer, but after the debacle my Flickr app had with the new server I decided that it would be safer to have them in another place as well, and WordPress have an agreement with Google photos which makes it a lot easier.

For a while I neglected my photo safaris, mainly due to the hot summer heat wave we had, but am now in the mood again.

I must really move on, I have been very lazy this morning and have a few things to deal with. My shopping expedition is this afternoon and I also have a few things to do on the computer. I am on a learning curve for our financial transactions at the moment, taking over from Mr. Swiss, and also have now got the job of finding out how our television works. We have had it for a few months now and it was always Mr. Swiss department. Unfortunately these new models are getting more clever and more complicated, expecially recording with the DVD thing.  I am still not interested in TV so much, but we are having problems it seems. Actually when I see modern day electronics, such as TV and finding the way in online banking, as well as just the computerisation of everything I wonder how the average golden oldie (something like my dad who never wanted a bank account) is managing. You just have to have someone to help you. I seem to be a glutton for punishment and still enjoy learning these things, but one day I will probably have my problems.

I am now gone to the land of vacuum cleaners and mops and showers, leaving you with a photo of a near farm. Usually there are a few cows on the meadow, but even they need their rest now and again from the hot sun. Have fun with your computers, make the most of all the week will bring. See you all later.