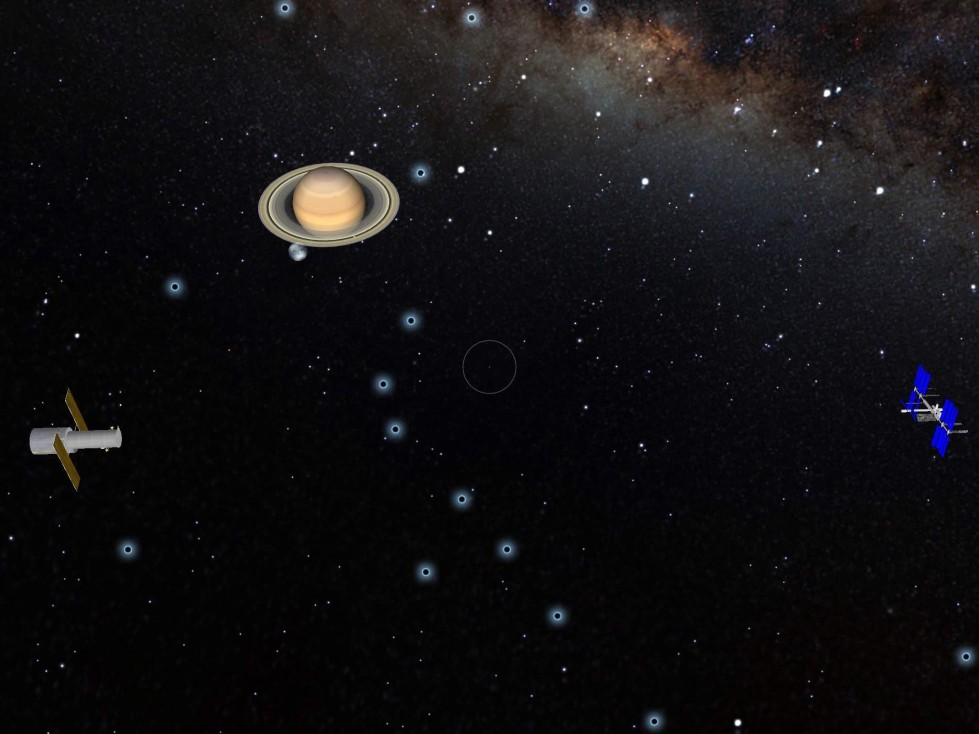 I was watching a TV programme a few days ago. Do you realise that our skies are full of junk. Every rocket, satellite and spyware that is sent into orbit around our world stays put, unless of course it might explode and break through the earth’s atmosphere which rarely happens luckily. Otherwise we would run the risk of being knocked unconscious by or being killed by a metal casing or strange object falling from the sky. A Swiss might be herding his cows and suddenly find a statellite, a sputnik, landing in the milk can.

Some time ago I fitted an app onto my iPad called SkyView on the recommendation of No. 2 son. Once you have this app you can hold your iPad towards the sky and you can see them all. I just took the above photo from what would be circulating outside my window towards East, although naturally not directly. A few hundreds of thousands or whatever space miles away in the sky.

The dots with a white round frame are objects, not stars or planets, but objects. As you get closer you find they are named as rocket parts. On the particular view I got we have Hubble, the NASA space telescope hovering around on the left and on the right our space station, although for what purpose a space station is I am not sure. The big round thing with the rings at the top is Saturn. If I had captured a little more I would have got Jupiter just out of the picture at the top. But our planets have been there from the beginning, so they have earned their place in orbit.

In other words, orbit has now become a word for a metal junk collection. It would probably cost too much to gather them all together and bring them back, and where would we put them all? Although it seems that intentions are there to design a garbage collecting space object to capture them all which will even return to Earth. Better to leave them up circulating over our heads, you never know what little green men with three eyes or other strange creations might have found our rocket remainders to be a comfortable home. It was an interesting programme and unbelievable what is circulating above our heads. Let us hope that they decide to stay where they are.

6 thoughts on “FOWC with Fandango: Orbit”