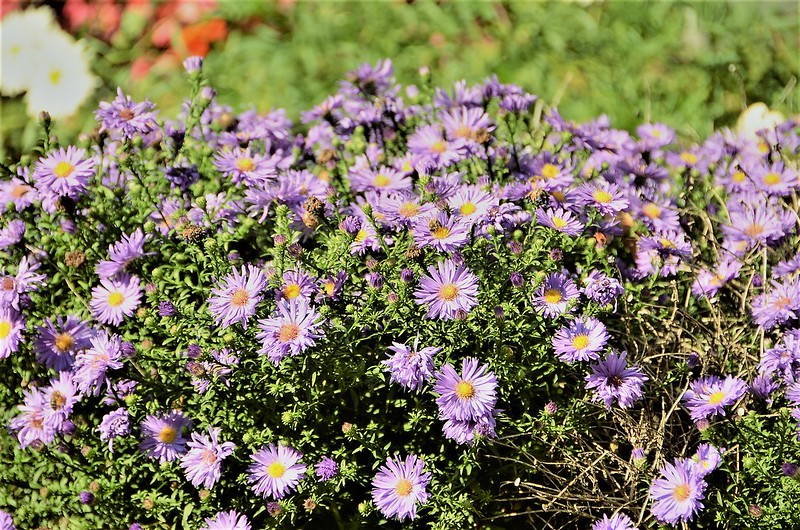 I am gradually learning all the names of those flowers that I take photos of. Another selection from a local flowerbed in town. 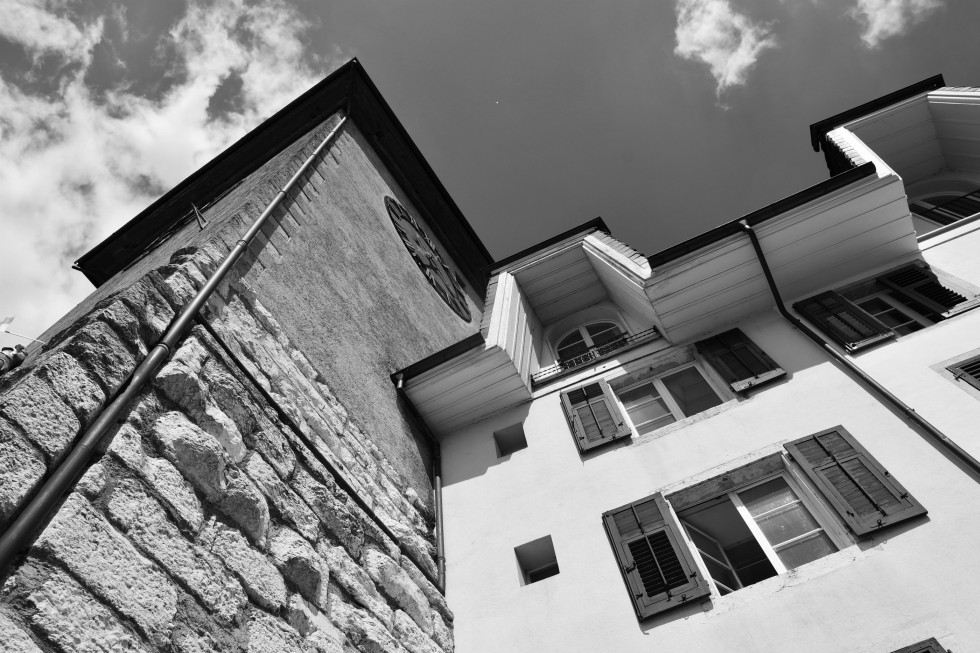 One of the old houses on the right in our town. On the left the clock tower.

The local castle, also a house at one time for the French Ambassador to Switzerland.

Humdrum is following me. Every day I embark on an adventure, or I try to.

I go to the supermarket on Monday, Wednesday and Friday afternoon. What could be more humdrum, I even know the days I go. Sometimes we might have a holiday on one of those days and the stores are closed. Imagine the excitement when I shop on Tuesday instead of Monday. The store has the Tuesday feeling, excitement and perhaps I might see a butcher on Tuesday that usually has the day off when I go shopping. A different face to serve me my sausages and ham.

On the other days of the week I make an effort to go for a wheelie with my camera (if it is not raining). Now the problems begin. I am looking for excitement for my camera lens and that is when a crow decides to fly before my very eyes, an action photo. Just at the moment when I was not concentrating and my camera is not ready. Or yesterday I was having my midday sleep and then I heard a very loud noise. I struggled to the window, opened the blinds, and what did I see. A formation flight of the Swiss airforce (yes we have one) and they looked perfect and low flyers, what a photo that would be.  I was in the bedroom, sleep still in my eyes, and my camera was in another room. When I eventually realised what was happening the planes were off in the distance. Just as I had got comfortable again hugging the bed, the planes did a second fly over. Another opportunity to get my Pulitzer prize for photography missed. It is the story of my life.

I have at least 200 photos of our local train, another humdrum event, but you never know. Perhaps one of our storks might be sitting on it as it approaches the little station in our village with its 970 population. Today there was a football tournament in the village on the other side of the river. I could hear the commentaries all day, but too far to go there. I would have to swim across the river. I could take the car, but probably not find a parking space.

And so here I am writing my daily humdrum blog. Why? because I do it daily I suppose. 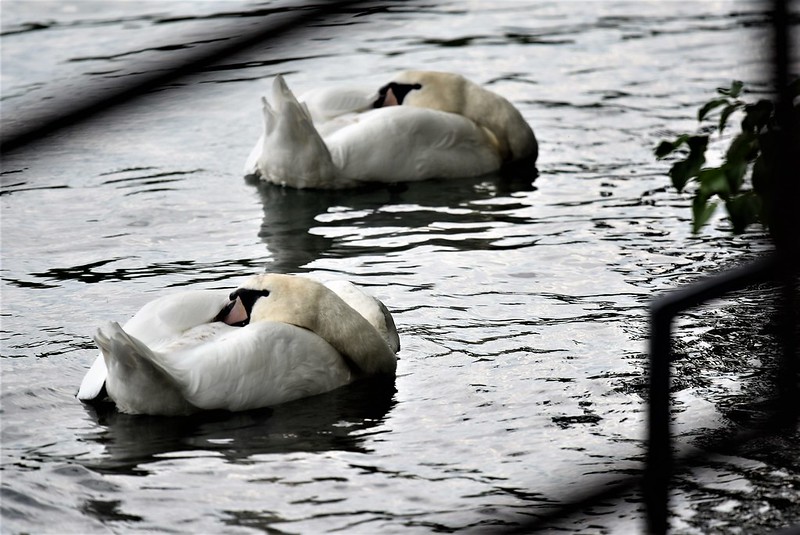 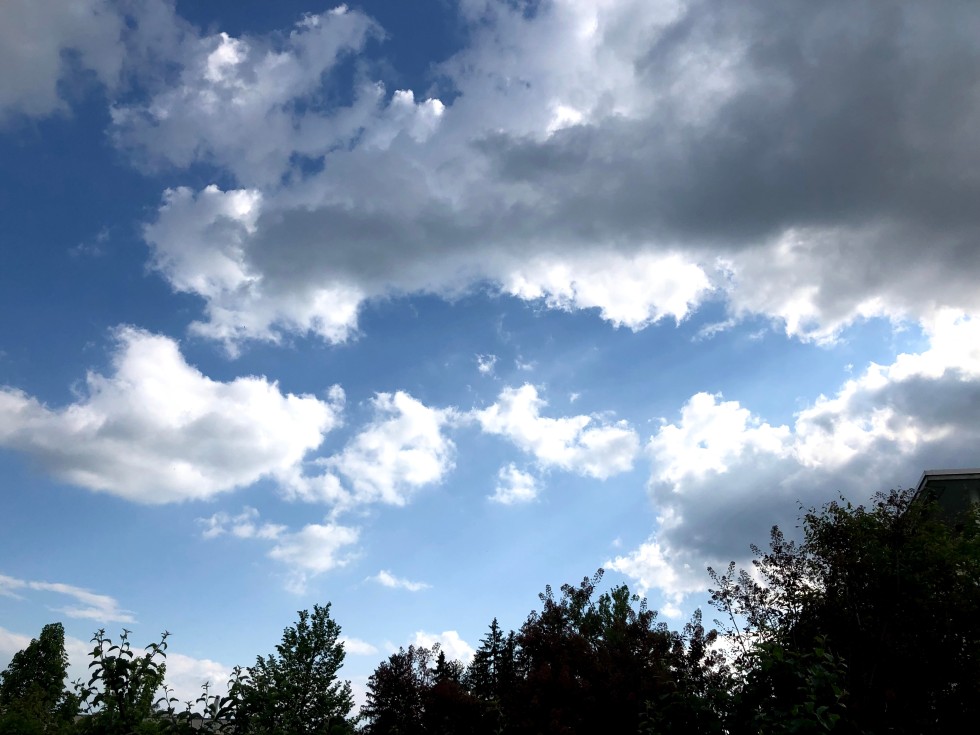 This is not this morning, but yesterday late afternoon or early evening. I found it a wonderful sky and much better than this morning which is grey in grey and there is mist everywhere. We had another rain storm yesterday and there is enough water in the air at the moment. At least I do not have to spray my garden.

Some time ago I took this photo of something strange growing in my garden.

It was growing in a strange place, at the front of my hosta bed and had stretched it stalk to show it was there. The stalk had grown from a group of leaves staying flat on the ground. I had no idea what it was, but realised that something was inside and one day they would show themselves.

One day was yesterday and imagine my surprise when I saw this head of flowers. Unfortunately they were not showing their faces – yet. I did not want to disturb them for fear of the stalk breaking, but I did manage this close up picture.

This was getting quite intriguing. What was this that was growing in my garden? I decided to examine further and believe them now to be something known as Allium siculum or more common Honey Garlic. Most allium have something to do with onions, leek or garlic, although there is a decorative sort. This plant seems to be more at home in Mediterranean areas, even in the Balkan countries, but there was no mention of it growing in Switzerland. However there are some gardeners that know of the decorative value of this plant and have them in their garden. My neighbour also has a few exotic vegetables in his garden, mainly chilli peppers and other far eastern spices, so perhaps he is also growing his own garlic.

I have no idea where this came from. It is just one example growing on its own. According to the details it will eventually have a very decorative seed pod when the flowers finish, so it looks like I could plant more.

I do have an example of the decorative allium in my garden which open its first flowers yesterday. When it is finished it will look something like this. 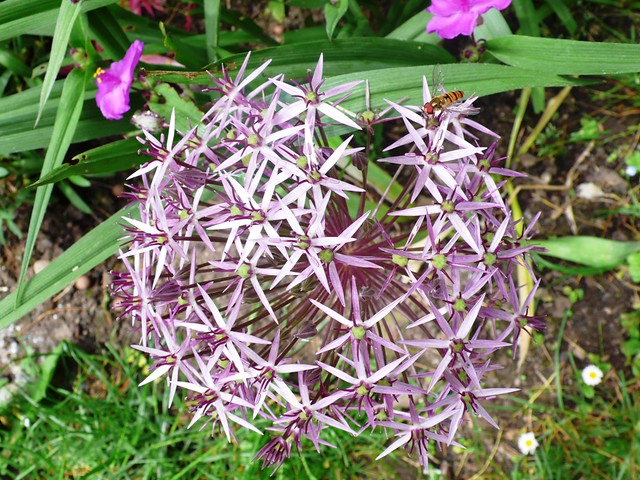 I took this photo a few years ago in my garden. So enough of my mystery flower, which no longer seems to be such a mystery. I still do not know where this wild garlic arrived from.

Otherwise life continues almost as normal, although today is Ascension Day, one of those religious holidays celebrated almost everywhere in Europe. In Switzerland all the shops are closed.  I remember when I was a working lady how I would enjoy those days now and again. Generally we also had a free day on the following Friday, making a nice long week-end. Today, being a golden oldie, every day is a holiday, well almost. The news yesterday was already full of reports of the traffic jam that had begun to build up towards the entrance to the Gotthard tunnel, our gateway to the Italian part of Switzerland where everyone seems to go when there is a holiday. The climate is warmer than the rest of Switzerland and the vegetation is more in the Italian style. These are the days when I prefer to stay where I am and not mix with the crush of the crowds in Lugano or Locarno.

I am out of bed a little earlier this morning, 7.00 am. in the morning at the moment. It is the day of fresh bed linen again, so I will be having a fight to put the fitted sheets on the bed and recover the duvet and cushion for two beds. Mr. Swiss is not longer able to do it. One day I might have to employ someone to do it for me.

And now to move on, if you have a holiday today then enjoy and otherwise just take it easy if possible.