Islands seem to be my fate. The first 20 years of my life were spent living on an island, called Great Britain, although we Brits were not really aware of the fact as such. Of course there was water everywhere, and we were something special (according to the opinion of the genuine Brits). One day I left this island and decided to discover another country. I was not really bothered which country, just something completely different and so I found work in Switzerland. Switzerland is not an island is it? It is surrounded by other countries, Germany, Austria, Liechtenstein (now that is an island if ever there was one), not forgetting Italy and France. We Swiss are in the middle. Not only that but we are not even European, although all the countries surrounding us are. We are something special, we are Swiss: have our own money (no € here) and our passport is Switzerland, Suisse, Svizzera (to compensate we have 3 basic languages and a fourth Romansch). We have never had a Brexit (or Swexit) problem because we voted against joining the EU.

But where I live in Solothurn we have our own island. 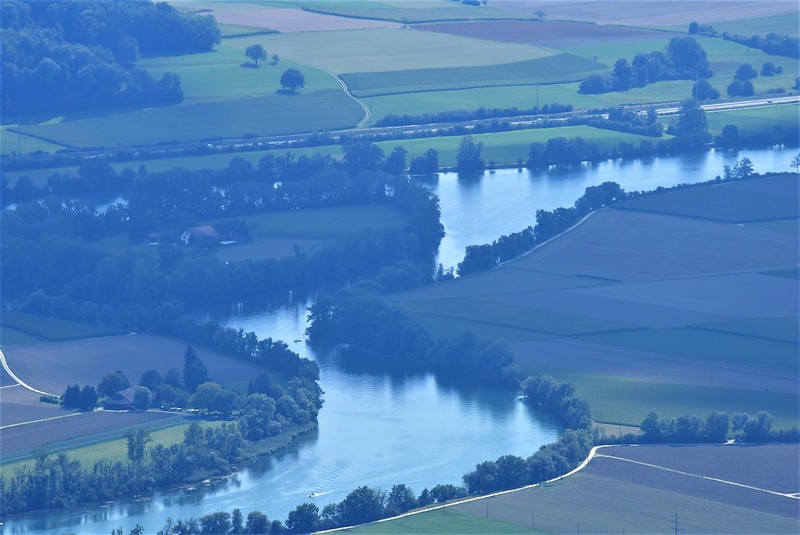 The river Aare flows through our Kanton (State) and along the river, after leaving our town of Solothurn, there is an island. I took the photo from the top of our house mountain, the Weissenstein, but you can see the island in the middle of the river and yes, I have been on this island.

It is quite interesting as only one family lives there and that is the farmer who grows crops and has cows, just like any other farm, the only difference being that his livestock have to be transported by boat to reach the local market or to arrive on the island. He also has another lucrative source of money. On week-ends in summer you can spend a day on the island. Food is provided from the bar-b-que and you can go for a swim in the river or just take a walk around the island.

We once spent a Saturday there. We had to drive to the boat station on the river and the farmer would come and pick you up and pull you to the other side. The boat was fixed on some sort of chain system. In the meanwhile this has been replaced as it was deemed unsafe by the authorities. After spending a pleasant day on the island with good food and drink we departed in the evening, again on the boat. The farmer has a wife and children and when they go to school, or shopping in the nearby town, they first of all had to take the boat. It is only a five minute journey, but something interesting.