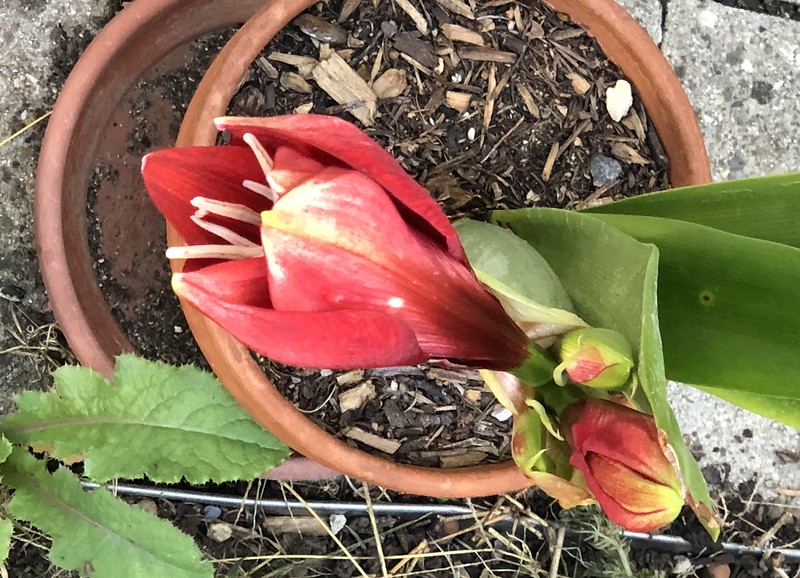 The birth of an amaryllis flower(s). 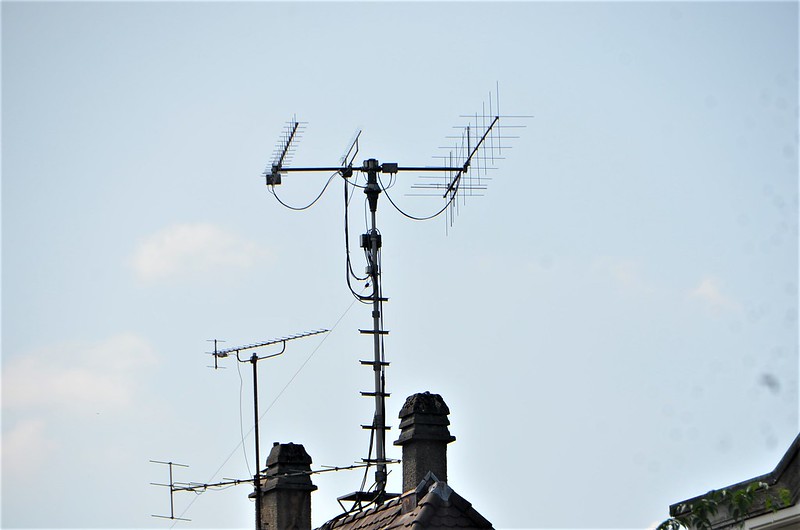 Yesterday evening our TV communications were again showing what they can achieve. It was Eurovision Song Contest time again. For those across the pond this is a European thing where since 1956 (so long ago) various countries in Europe compete with a song every year. I remember the first days where it was just a few countries all singing in their own languages, although even then English seemed to be the main one.

At the beginning we would watch this little contest on our black and white TV at home hoping and knowing that actually great Britain deserved to win, no matter what the song. The Brits had to learn eventually that they were not the only country in Europe and the days of the Empire were now gone. There were countries like France and Germany and even little Switzerland who actually won the first contest with Lys Assia from Ruppeerswil who passed away last year.

And now the years have gone past and Europe has expanded. We have now so many countries competing that  preliminary competitions have been organised to determine who takes part in the grand final. I remember back at the beginnings that one country from Eastern Europe, Jugoslavia (this country no longer exists) would send a singer dressed in a nice suit and sing his heart out with a song more resembling an operatic aria than something modern. Of course he lost, but the country was taking part.

Today it seems the countries of Europe have multiplied and there are names and places we have never heard of. Aserbaidschan was more a place with perhaps its own post stamps, but definitely not a song. The songs were only allowed to sung in the country’s own language for a while, but since this law has changed, most countries are now singing again in English. And what about the Brits? Yes well in yesterday’s competition they were last, no longer the kings of song and it seems that the Brits are blaming it on teir prime minister and Brexit. It was also an exception that Switzerland were taking part in the final. The song was quite good, all Swiss thinking it would have a chance to win, but it only arrived at the fourth place. And Holland was the winner, whether you like the song or not. I am not quite sure how it is voted, but it seems today to be an online thing with telephone and computer from the people. Anyhow here it is.

So enjoy if you can. For me it was an exception that I actually watched the contest yesterday because through the years, since strange countries were taking part with strange songs and strange dressing codes, we gave up. However, we are now golden oldies and a little bit of international song contest makes a change on a Saturday evening. I must also say that the quality of the songs has improved and no longer the strange rapping tones, or incomprehensible chants of a land that no-one has heard of. Europe has grown and who could imagine that as guest country Australia is now also allowed to take part. Perhaps once day we might welcome a song from the States. Yesterday Madonna put in a guest appearance on the show, but it seems she is no longer what she was and a bit off tune. 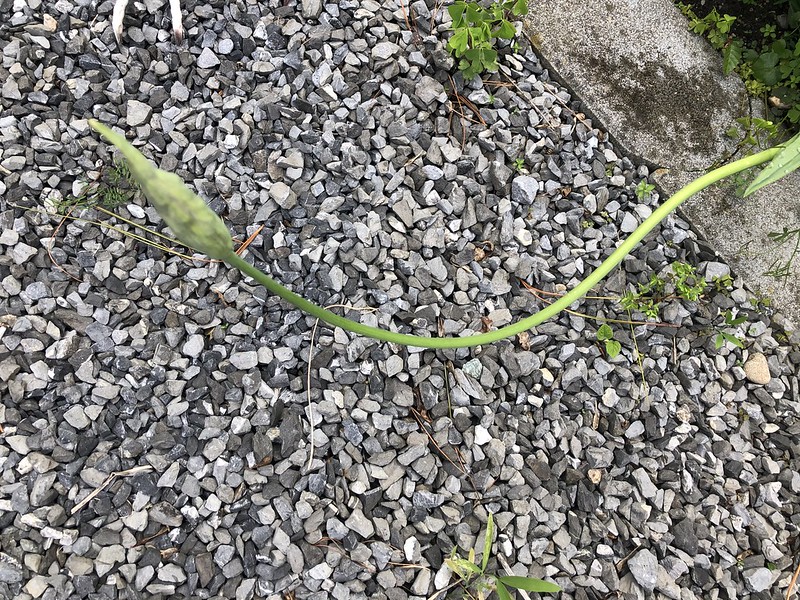 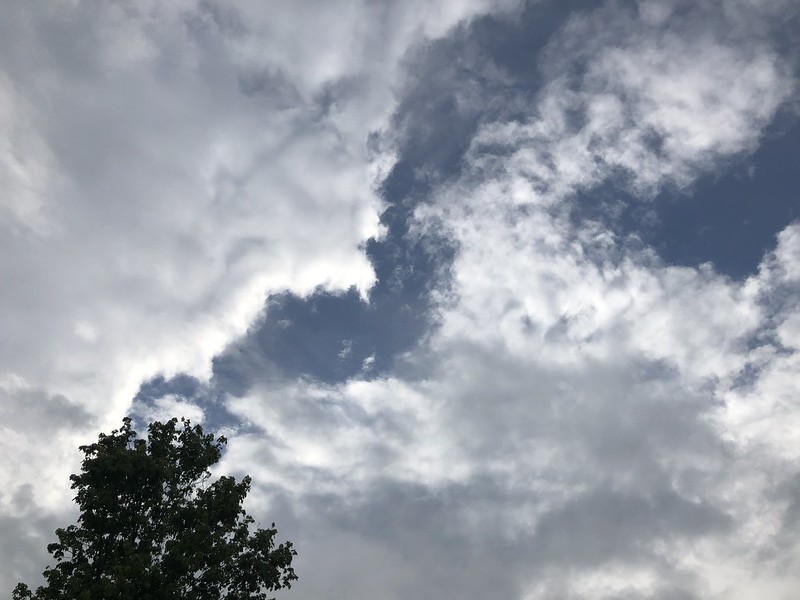 Reality has returned, and it was so good to hug the bed and relax, but action must be. I dragged myself to the kitchen and on the way had a look at today’s sky. I saw that there was a bit of blue in between, despite that it rained during the night. Actually those night rains are quite good, meaning I do not have to water the garden in the morning. Water has become quite an expensive commodity here.

Talking of commodities, I/we were quite shocked with our last electricity bill. We knew that again the prices had increased, but we are now paying a third more than the last time, and we (actually me) really save on the electricity where we can. I am the one that switches unnecessary lights off. The electricity gurus did tell us that there would be an increase, but I never realised that it would be so much.  I think we will have to return to the days of candlelight, although perhaps candle-wax prices would also increase.

Yesterday I did go for a wheelie in my chair in the afternoon. I was interested to see what shape the “fifties” week-end was taking in town. On my way there I got the first hint as I was wheeling along. 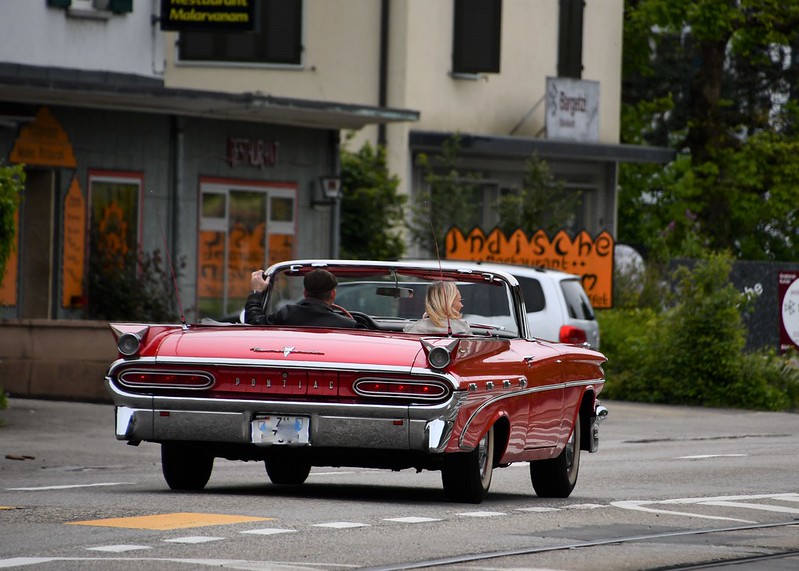 This car drove past and of course I was ready with my camera. It was a Pontiac and  they really do not make them like that any more. Probably such cars are/were more common in the states in the earlier days, but our roads in Europe were never really big enough.

As I arrived in town there were more such arrivals. They were still arriving when I was there, so I had to move over to allow place for them to drive in. 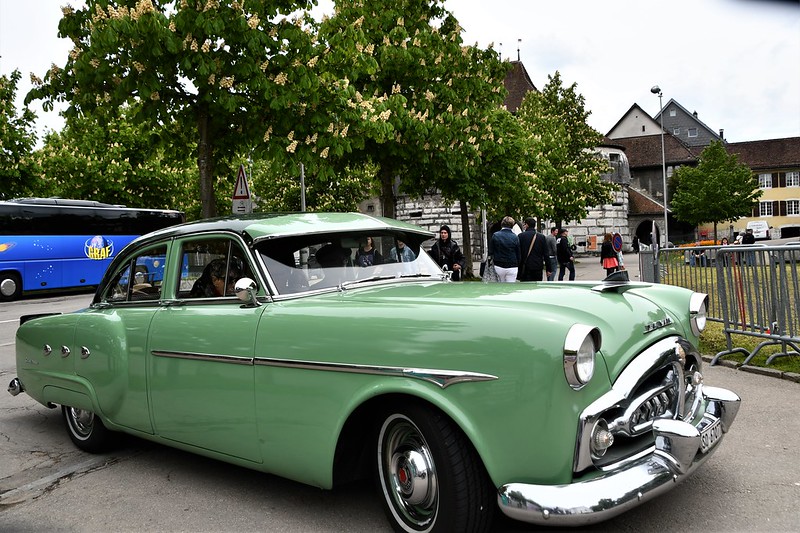 I do not know what this one is, but I had to move over to allow it to enter. I also saw some people in town who were ready for the fifties. Most were in blue jeans with wide turn ups on the legs showing the contrasting lighter blue jean material from the reverse side. The men had peaked caps and dressed for the occasion with perhaps a small bow tie on the shirt. In my days of the fifties I was about 10 years old. I remember the fashions to a certain extent, but the man on the street just wore what was available and I do not remember bow ties. I do remember by first jeans, it was actually the first time I wore trousers and did I feel special. 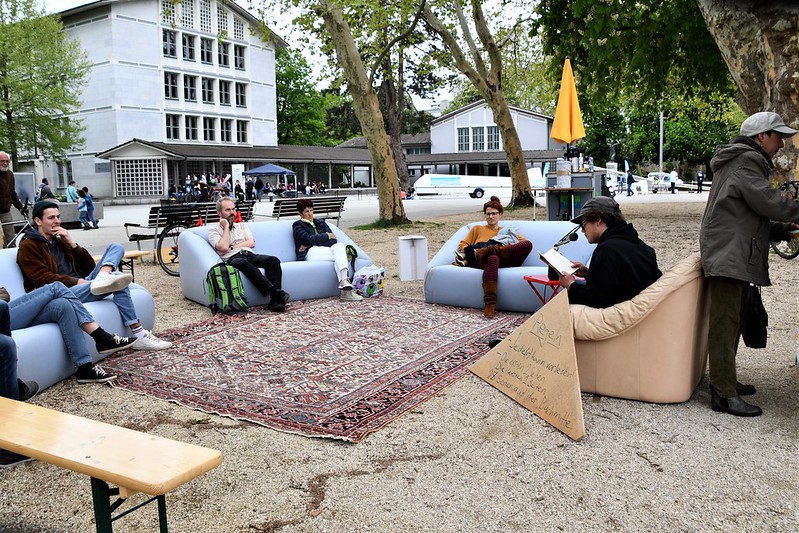 I wheeled on and discovered this group of people at the side of river comfortably seated in various armchairs and settees. The guy on the right had a book in his hand, a microphone, and was reading. It was all situated next to our town book case where we have books you can bring or take for reading purposes. It costs nothing and I often see people there searching for the right book. The poster next to the guy says that anyone can read but there are rules that they do not sit there for hours of course, reading a complete book. I found it a good idea and it was very comfortably done I told Mr. Swiss about it, and he said it was mentioned some time ago on the TV and radio. 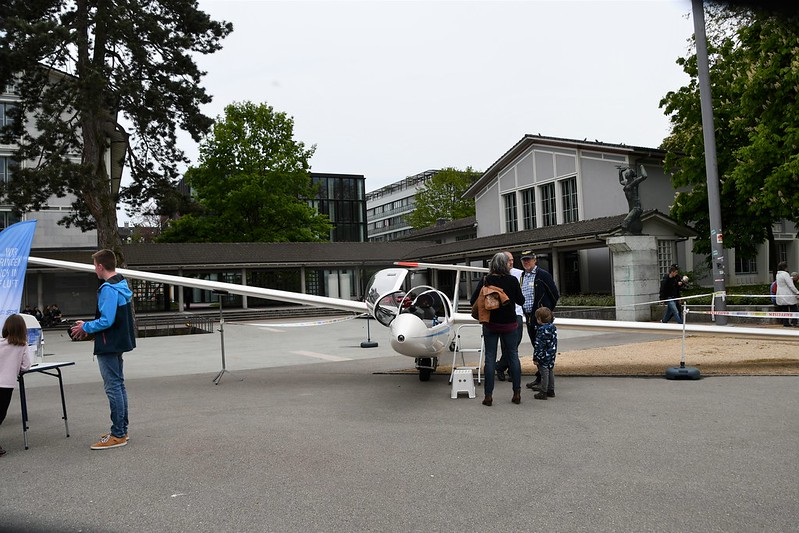 Opposite, if you look carefully, you can see that a plane had been parked. It was from a flying school advertising how easy it would be to learn how to fly. I decided I fly enough when I have my special falls where we have to organised men from the ambulance service to pick me up again, so I moved on.

And now enough early morning talk. I have a meal to prepare, a little bit of tidying, a little bit of bed making and a shower to perform. Let us see what the day holds for me. Perhaps I might return to the fifties this afternoon, who knows. Have a good one, take it easy.

I noticed the pigeons are at it again, the male all puffed up and ready to go. I often feel sorry for him after minutes of cooing and encircling his newly found mate and she is not willing and flies off leaving him to search for a new partner. 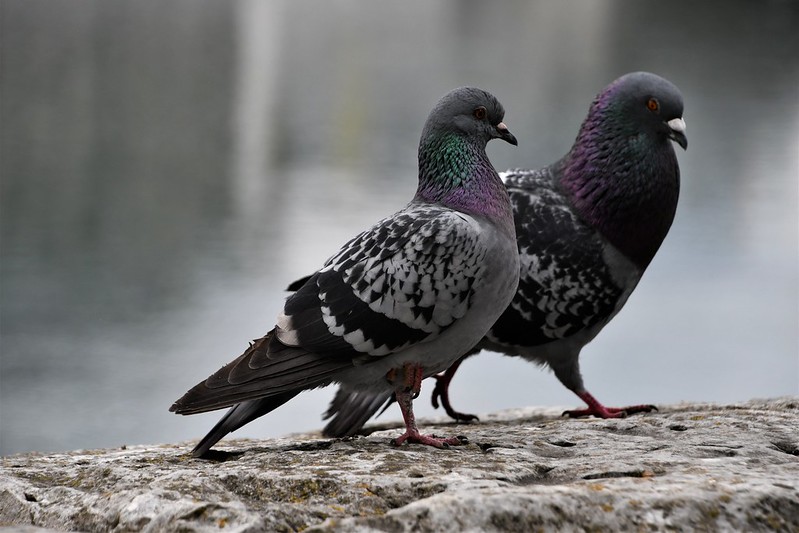