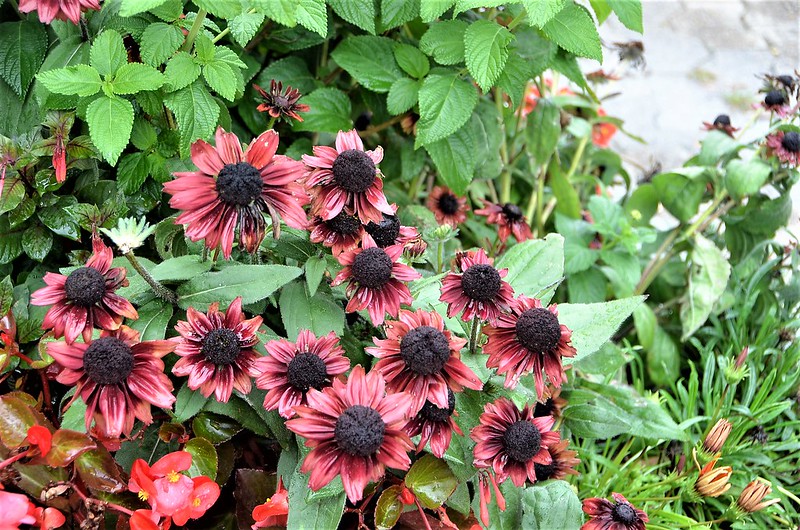 Probably going towards the end of their season. 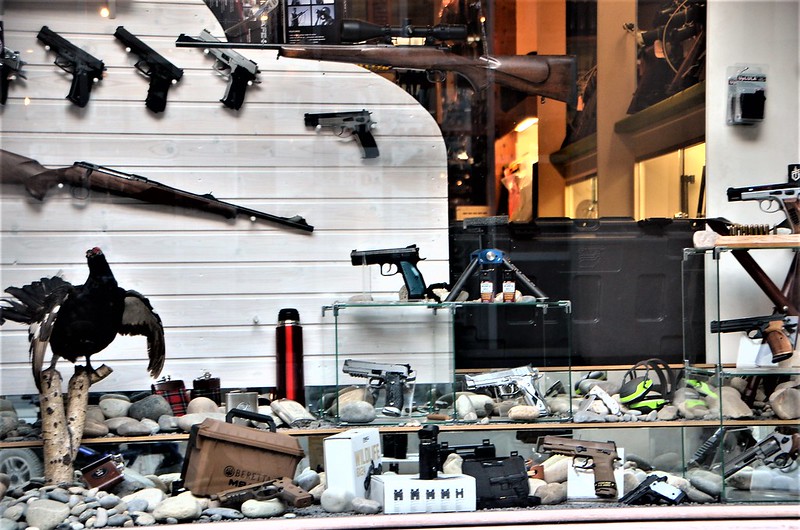 No idea I must admit, but we do have an arms shop in our town, although I am not sure if you can just walk in and buy a gun. Every Swiss able bodied man has a rifle at home somewhere, perhaps under the bed or in the cellar, because every Swiss able bodied man is a soldier. Mr. Swiss was not so able bodied but my youngest son was. He did his time in the Swiss army for three weeks a year for many years. After completing his duty he could have bought his rifle and kept it, but he decided he did not need it and returned it. 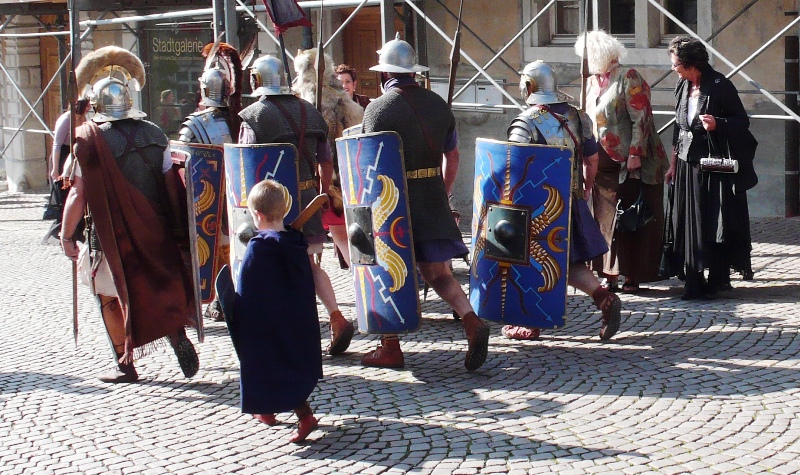 Of course, our town being founded by the Romans we discarded the crosshair as not something you would need with our weapons.  Note they start quite young in our army.

These are mine and do you know how difficult it is to take a selfie of your eyebrows, but I did it. I even caught my special dent between the eyes in the forehead, now that is unique. I was probably squeezed up when mum had my bump. No-one else in the family has this dent.

Otherwise I have absolutely nothing to say about eyebrows. I do not pluck them or colour them. Now and again I notice that one, above the left eye, tends to keep growing and becomes twice as long as the others. It even  decides to part company with my eyes, only to start growing again afterwards. Perhaps I might get an entry in the Guiness Book of Records, the lady with the growing eyebrow. 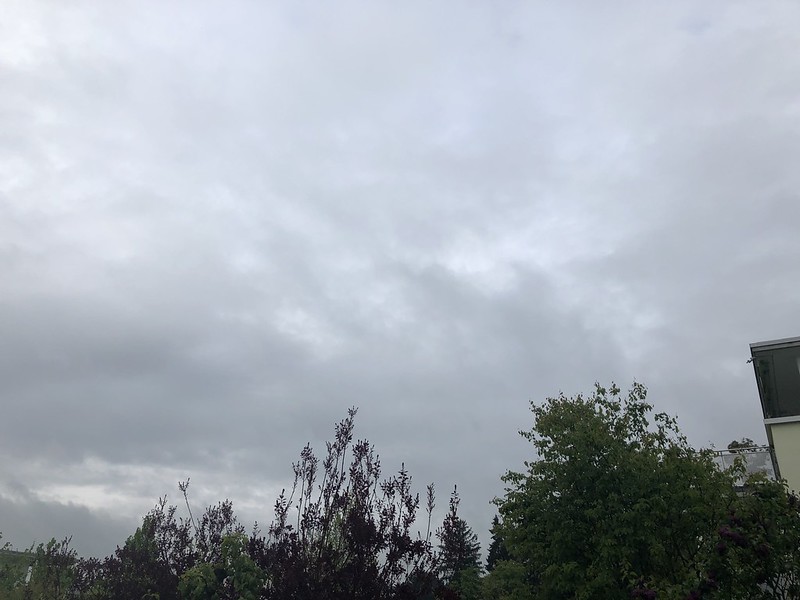 And the same old dreary grey skies this morning. It’s raining again so only room for improvement. This weather is really miserable and there is a cold wind blowing to enhance the effect, although Mr. Swiss, who has just appeared in the kitchen tells me it is 8°C. The Swiss has always so exact with the details. I suppose they would be, having their origins in a country known for watchmaking.

So what can we do today? It’s Friday, and time again for a week-end shopping tour, 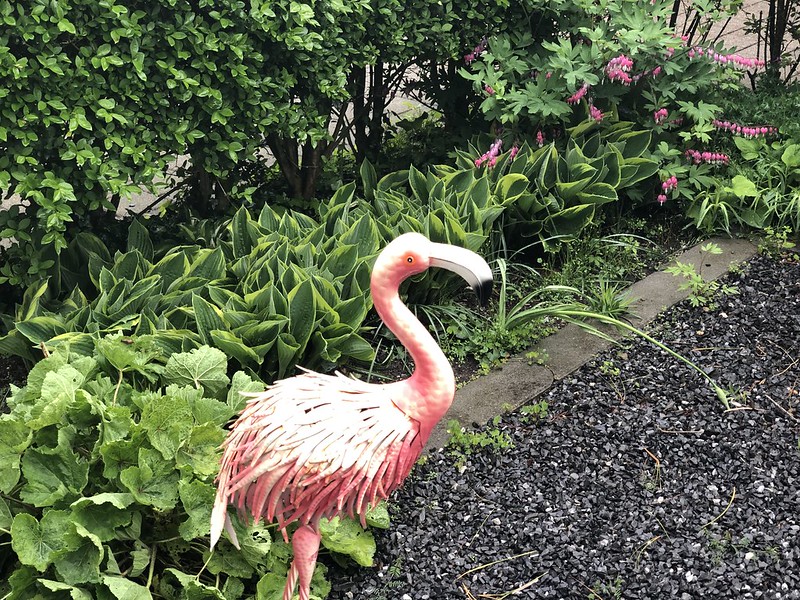 although in this wet and damp weather, I think I would rather stay at home and watch the garden grow like my flamingo. 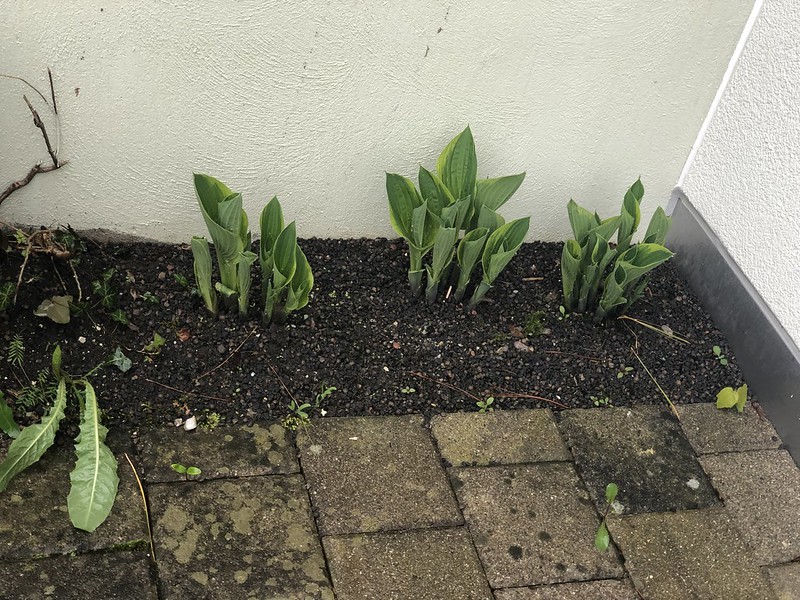 My hostas seem to be thriving in the weather. This group were only planted two years ago and are still finding their way. When they renovated our building they removed this part of the garden to plant the scaffolding. 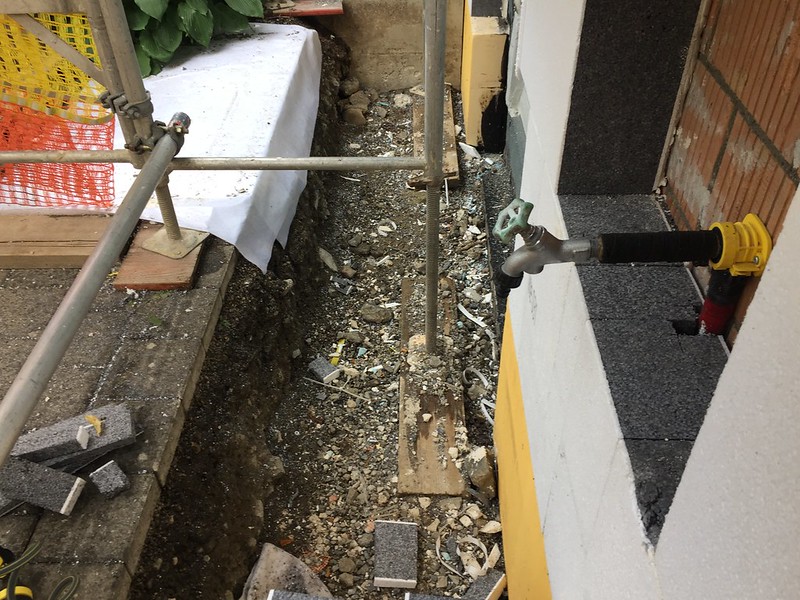 I will never forget those days of destruction and rubble, although it was in 2017, all rembered in my 1,100 photos. I thought we would never have a normal situation again, but the last replacement were my lost hostas. 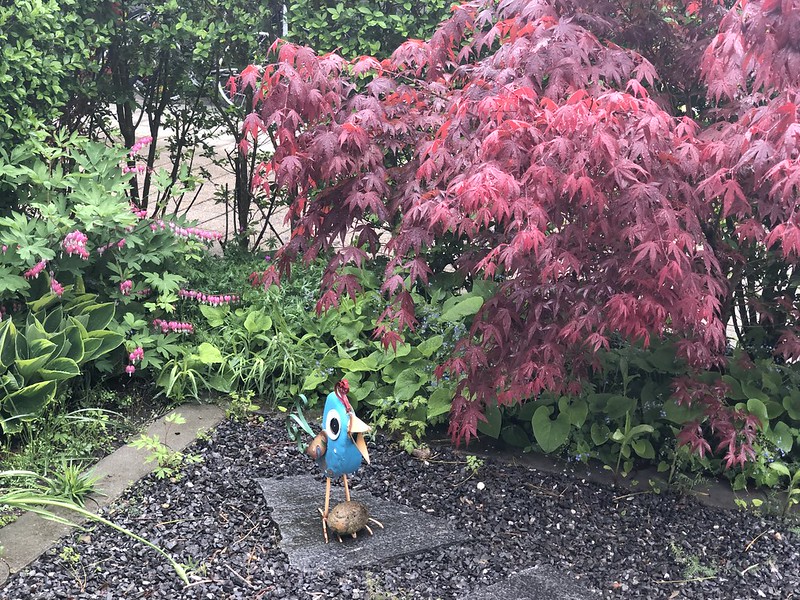 At least the rest of my garden was left to grow, although there was a small battle with screws, clamps and other strange metal parts that found their way into the ground.

Yesterday my signature was again needed to sign a Swiss voting form. Mr. Swiss is very good at keeping tract of our various governmental orders. He puts the Ja and Nein on the form and I sign, although I do ask what it is about this time. We go on average every three months voting for some sort of referendum and new law and I sometimes have diffculty keeping up with it all. This time it about an increase in tax. It will probably be accepted. We are one of the few countries in the world that say yes to more tax, but we get the various leaflets explaining why. Oh to be in a direct democracy, you are always busy. We used to go to the local polling station to cast our vote, but thank goodness we can now also do it all by post, otherwise the week-ends would be a come and go at the local office.

The only written document that interests me today is my shopping list and that is long enough. The supermarket has now provisionally introduced 4 new ice tea varieties and as the customer we can vote which one will be put onto the shelves. Apparently they only have room for one new flavour and have decided to leave it to the customers which one. Naturally as a stupid customer I bough the selection of the four bottles and have so far tried the hemp tea and the white tea with pineapple and cocoanut. There is still the black tea with lemon as well as the green tea, watermelon and kiwi mixture to try. I can vote and have a chance to win a gift card. I try everything these days. you never know I might win. Up to now my choice is the white tea, but I still have to try them all. They could have added this to our national voting form, it would have saved time.

And now I am off to organise my own household. Have a good day, my the weather be with you, see you around. My creeping buttercup in the garden, just one at the moment, seems to be spreading its branches. 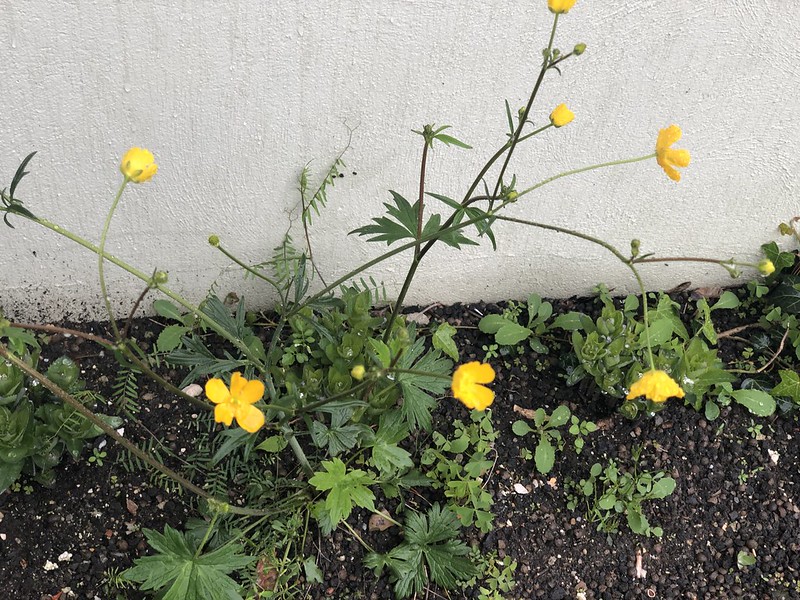