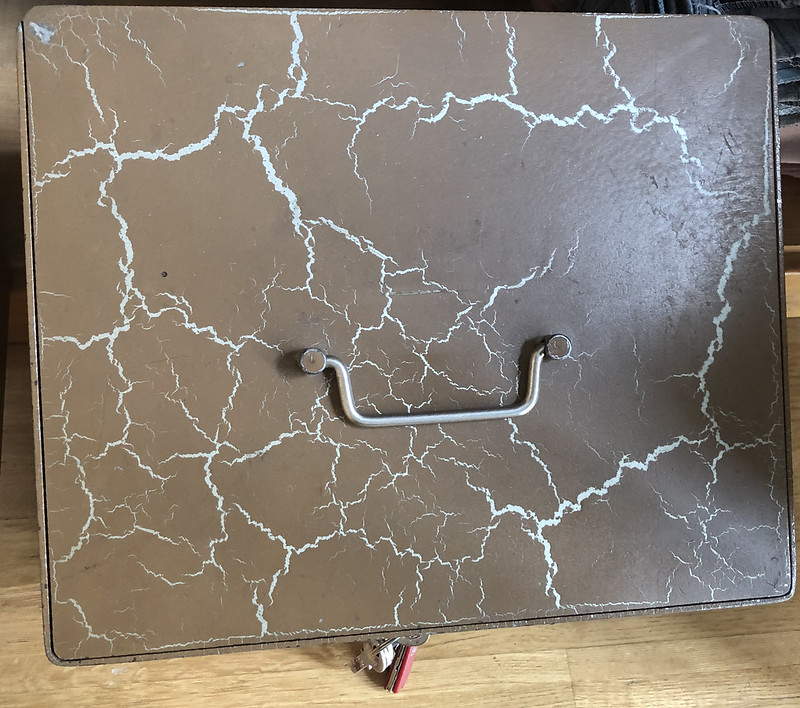 One of the things I discovered about the Swiss way of life, after getting married, was that they are fully equipped. I do not think we had anything worth keeping safe in England and keeping documents did not come into the question. Dad kept his money in his trouser pocket and mum had a purse.

And so I moved in with Mr. Swiss. It was a trial situation and there was no rush. We were getting used to each other, although a month later we got married and at the end of the year I was mother to three children (I inherited two kids from his first marriage).

And so the big metal box also came with Mr. Swiss. This box is fire proof, lightening proof, and most probably act of god proof. I was fascinated. It was kept in the bottom of a cupboard, and contained the details of Mr. Swiss life and slowly also mine. If you get married in Switzerland you get a family book. Husband and wife are entered into it and there is room for 14 kids, although we only managed two. He had a second family book from the first marriage, also with two kids. These were also in the box.

The funny thing is that I never bothered with this box. I left it to Mr. Swiss. Today I had to open the box to let the moths out. The Brits are re-organising their accounts for the pension scheme. They have discovered the magical IBAN number. I received a form to complete, but they wanted so much information that I had to go on a search for details.  They have been paying my British pension money into my post office account (a paltry amount monthly because I only worked for two years in England) and now they write for IBAN, BIC, Swift and Bank Account Numbers so now I have to give them details for payment into my bank account.

On top of all this they want my National British Insurance No. Huh, did I have one, and if so it was 52 years ago. So into the box I went. Mr. Swiss had to hold it open as if the lid had closed on my fingers, I would probably have lost a couple. All I found was a British medical card issued in 1946 when I was born. It even had the doc’s name on it from Bethnal Green and I remembered him. Of course he is now long gone.

So today the box played a role again in my life. It has now been put to rest again in the cupboard: after all we now have computers. What did surprise me was that Mr. Swiss had carefully put all my GCE certificates (english school system high school) in the box. I had not seen them for at least 50 years and did not realise we still had them. Today no-one is interested how many GCE’s I got (it was 7). My best results were Biology, French, Maths and Science, yes I should have been a scientist. The worst was english, I had to take that one twice, but passed eventually. History and Geography were also not bad – oh the memories stored in that iron box.

To continue. I wrote a slightly sarcastic sharp letter to accompany the form for the Brits, although I did thank them for paying my pension (paltry) regularly up to now. Did not want to spoil my chances for an increase.