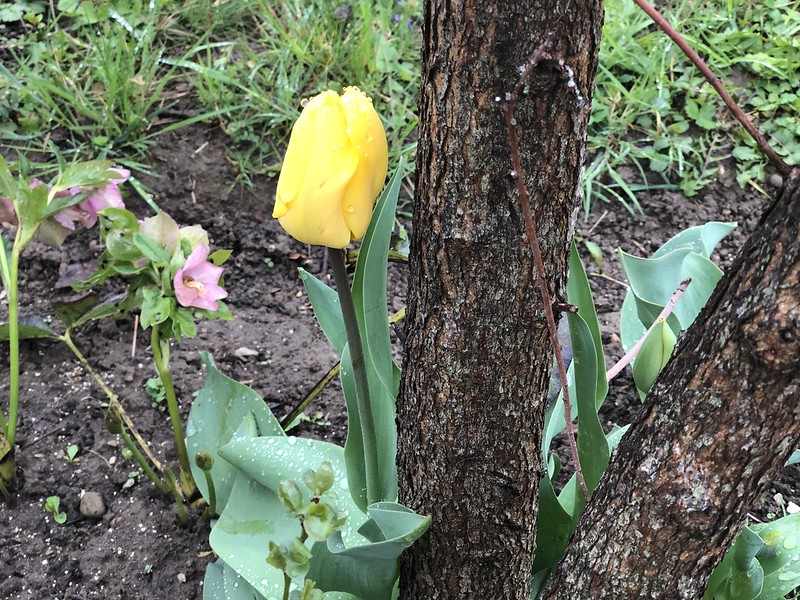 I suppose i could call this one the survivor, although it takes more than a day of snow to stop them growing. First of all the snowdrops appear, followed by the crocus. The daffodils have arrived and now the last in the waiting line are here, the tulips. 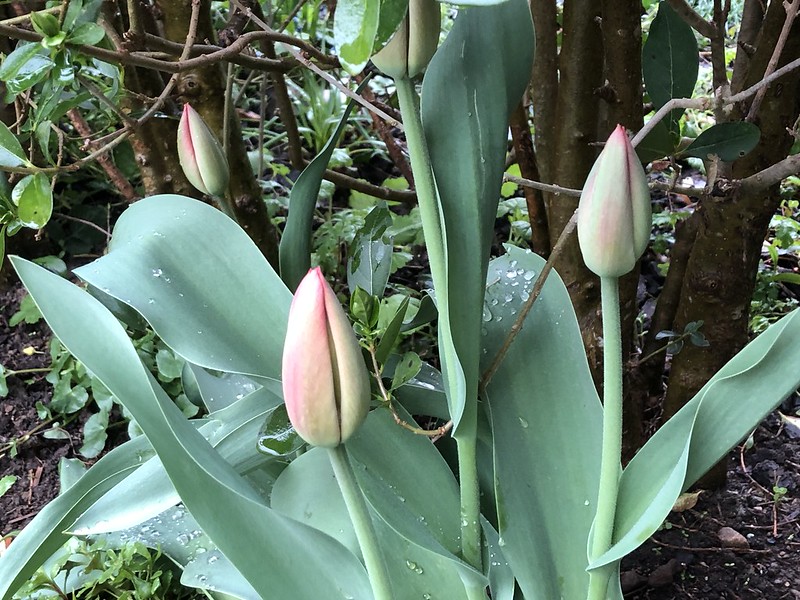 These are really a blast from the past as I planted them at least 15 years ago, but they return every year: sometimes bigger and better and sometimes just there. This red one, when it opens, is a so-called Darwin tulip. It has been hovering around for at least a week with its buds, so I am hoping it will soon open up. Today there is no snow, just a few small remainders melting and I am glad. When I arose yesterday morning it was snowing and only stopped in the late afternoon. 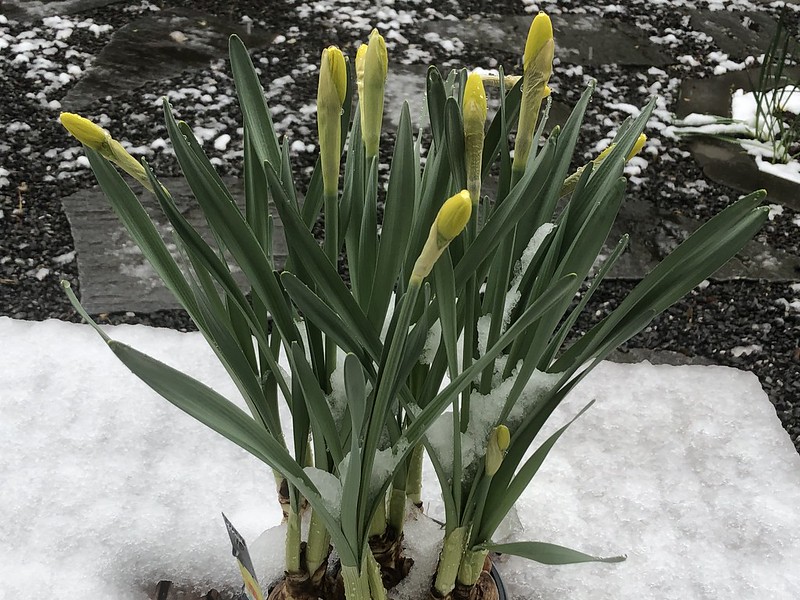 Some may have seen this photo yesterday, but it will remain a reminder of snow in April.

Otherwise I am looking forwards to a nice quiet morning with a bit of this and that. No dental appointments for Mr. Swiss today. I am also due for a dental visit. I have no problems, but just the general dental hygiene to have the plaque and tartar removed.I got an appointment for end of August, although I am really two years behind. I was astonished, but the receptionist had nothing earlier.

My teeth seem to be OK at the moment. I asked if I have to wait so long if I really have a dental problem. She said then I could go straight away which did reassure me. I grew up in a family where mum had dentures already when she was 40 years old and no-one ever told me to clean my teeth  before going to  bed. As a teenager I organised my own dental appointments as the family belief was basically only go if it hurts and have it removed. I took it into my own hands. Of course the damage was already done and I spent a fortune in Switzerland in getting everything dealt with. Today it is all under control, two pivot teeth later. I also have gold tooth at the back. I had to have another pivot tooth and decided on gold which is not really more expensive than the normal tooth and it looks good (for me).

I used to have my fillings done with amalgam, but with time they have all been replaced with composite. I am glad and was not so happy with a mouth full of mercury. We have a very good dentist. The father is now retired – we were one of his first customers. His son now has the practice who is excellent, with other assistants.

So enough with dentists, it almost spoils my breakfast of honey on bread and butter.

I spent yesterday evening composing the shopping list: Mr. Swiss was already hugging the bed. I will be off this afternoon to deal with it in the store. Otherwise everything under control. I have also been busy searching for names of the wild flowers I often photograph. I have a very good app, PlantSnap. It costs a little, but is one of the best. I find everything I need. I so like to know the names of the flowers I find. 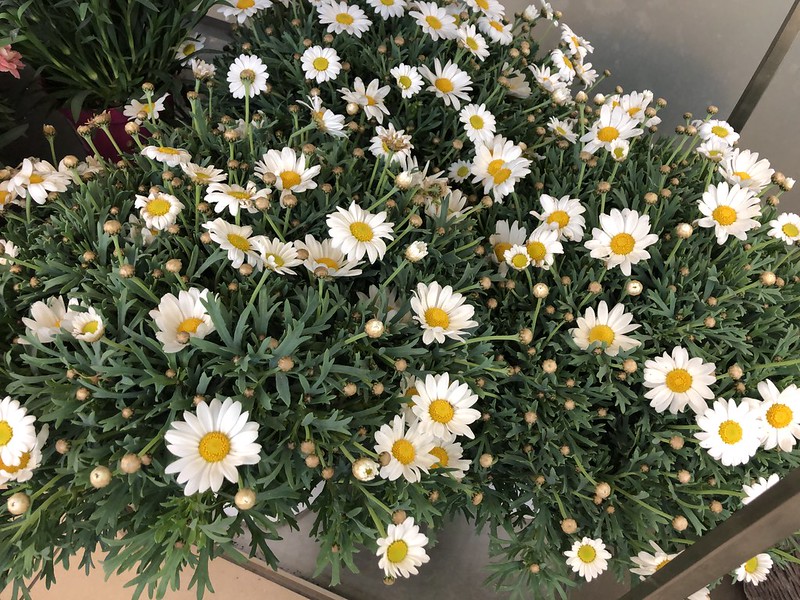 These daisies are at the moment available in the store and I discovered that they are known by the name of oxeye daisies. Yes, I have a new hobby, apart from shopping, ironing (today I have the bed linen), cooking, washing and blogging. I am also now a regular car driver and if I have some spare time like to read, although that is suffering at the moment.

And now I am on my way to play vacuum cleaner after a visit to the shower. Have fun, ignore those who do not have fun – they are spoil sports. And I leave you with a heartleaf Bergenia, found in a neighbouring garden. It is so much nicer to have a name for a flower. 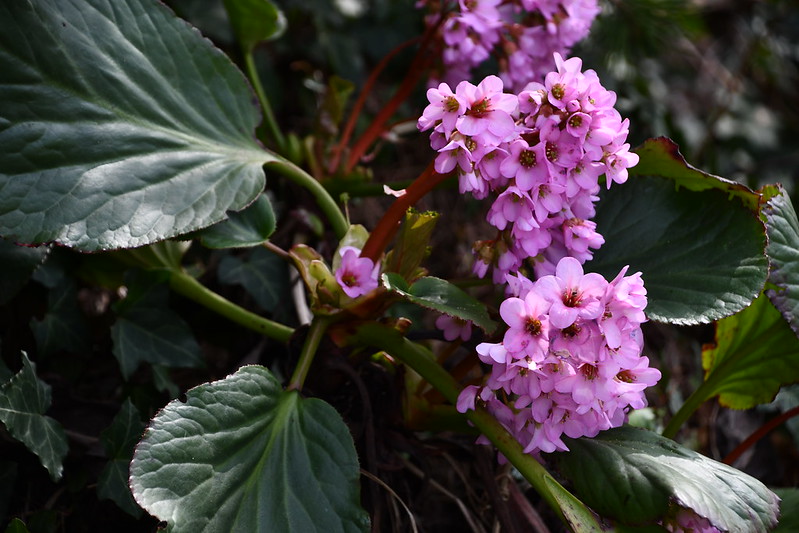