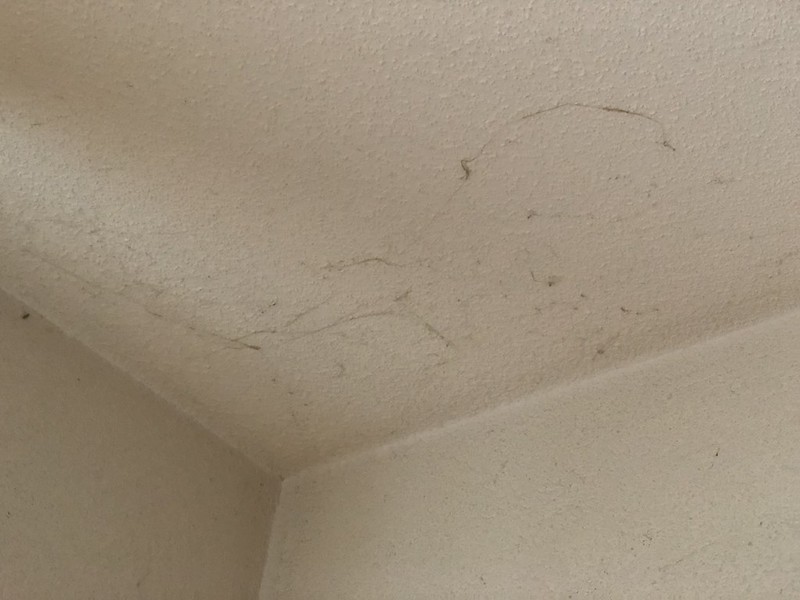 I was ashamed to show this photo, I even marked it private in my Flikr album. No, it is not my closet because my closet belongs to me and no-one anywhere in the world wide web. I know what I have, am constantly sorting everything and a golden oldie no longer buys new clothes to match the fashion: trousers and a long top (preferably with short sleeves) to cover what has gone south. And the trousers have an elastic waistband, so what more is there to know.

But someone mentioned Spring cleaning which is not something that really exists for me. I am constantly cleaning something, so why postpone it to Spring. On the other hand the shadows of Spring showed a long thread hanging over some picture frames I have on the wall. I looked up and discovered that I had a new decoration on the ceiling: thin black threads. I then noticed that these threads had grown and the angle showing between the ceiling and the wall in the complete room was no longer an angle because it had been decorated by more of these web like designs.

I soon discovered there were laws governing the removal of these fine decorations. Do no use a duster because it will smear the webs transforming them to black lines – see photo. A feather duster is even worse, because it spreads the ghost train effect even more.

And so I selected my Dyson vacuum and removed the head. I was left with the tube and it sucked the threads into the inside of the machine. I would emphasise that no spiders were harmed or killed during the operation, because I did not see a spider. They had abandoned the decorations long ago. After the removal in the bedroom (yes the bedroom where I slept with these decorations hanging over my head every night), I moved to the spare room and horror, another haunted house scene. There were also two cat cushions on the top of the cupboard. Mr. Swiss managed to climb a ladder and I carefully sucked away enough cat fur to weave a carpet.  Afterwards I realised that our cat did not look at these cushions with his tail for at least two years and so they arrived in the garbage.

I moved on to the living room – not so bad, but it could have been better, especially in the corner above the TV cupboard – will this never end? The corridor came next. After an hour I was web free. Yes I did it. I can now show my photos to the world wide web with no problem – until I took a closer look at our bookcase which covers a complete wall. To be quite honest these are the things that Mr. Swiss would look after, but things have changed and he no longer can move like a teenager. Neither can I, but I have long arms and a nice long duster and we now have a dust free book case.

What I still do not understand is that I have never seen a spider.