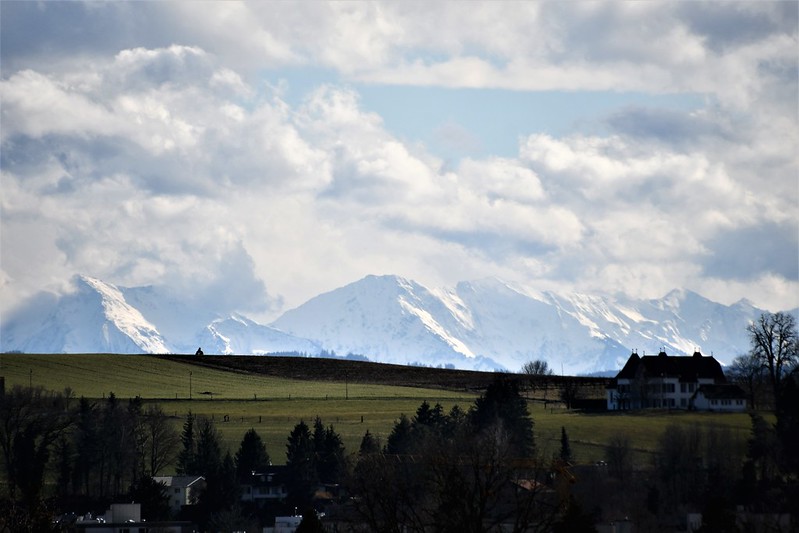 A bit of a dreary morning again with rain just like yesterday. Yesterday changed by the afternoon and the sun was shining now and again so I decided to get out and see what the local world had to offer. I was not feeling so adventurous so decided to stay in the village in the area where I am at home. It is on a rise so you get some good views now and again. One of the first I saw was across to the Bernese Overland which was still showing itself reflecting the sunlight. It looks quite close, but there is a vast expanse of flat land in between, including many villages and the towns of Bern an Thun. We often spent our summer holidays in Grindelwald in Summer which is about the closest you get to seeing the big three (Eiger, Mönch and Jungfrau mountains).

I wheeled on to see if there was anything new to see in the village. 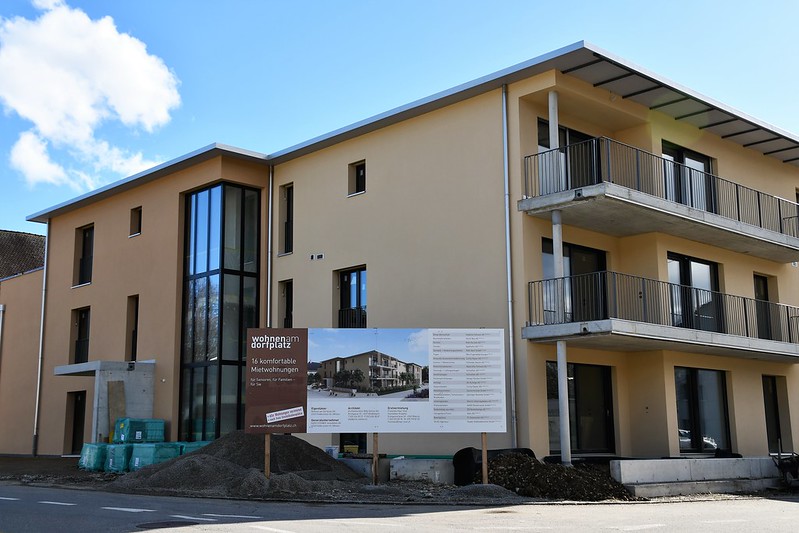 A lot of building began last year and we seemed to have cranes everywhere. this block of flats has now been finished. They were built for senior residents and to rent and not buy. I am sure they are the  best modern design for golden oldies, but the rental is probably not cheap. Three thousand Swiss Francs monthly is not unusual to pay today and I would say these apartments are for those with money to spare. 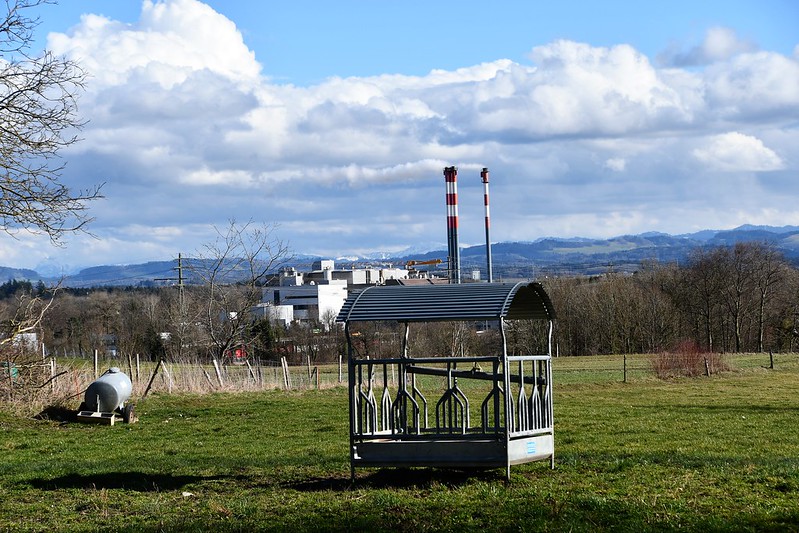 There is of course laws which prohibit every open space being built on. This is part of one of the local farms and ready for the cows with their food trough and water tank. It is still a little early to let the cows out but they will soon be arriving. This is the friendly farmer that lets his cows keep their horns and does not have them removed from the calves when they are still babies. 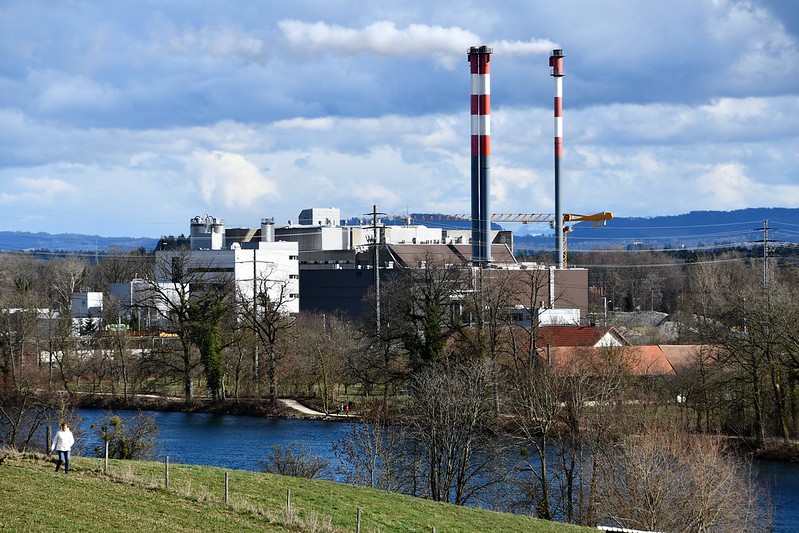 In the background of the last photo you can see one of our less picturesque places. It is outside of our village, across the river Aare in Zuchwil and is where the garbage is delivered to where it is burnt. The chimneys seem to be smoking permanently, but it never smells. Even Switzerland has to have their garbage disposed of. As you can see a river runs through it all. On our side it is our village, and on the other the next village of Zuchwil already begins. When I first arrived in this part of Switzerland I lived and worked in Zuchwil. 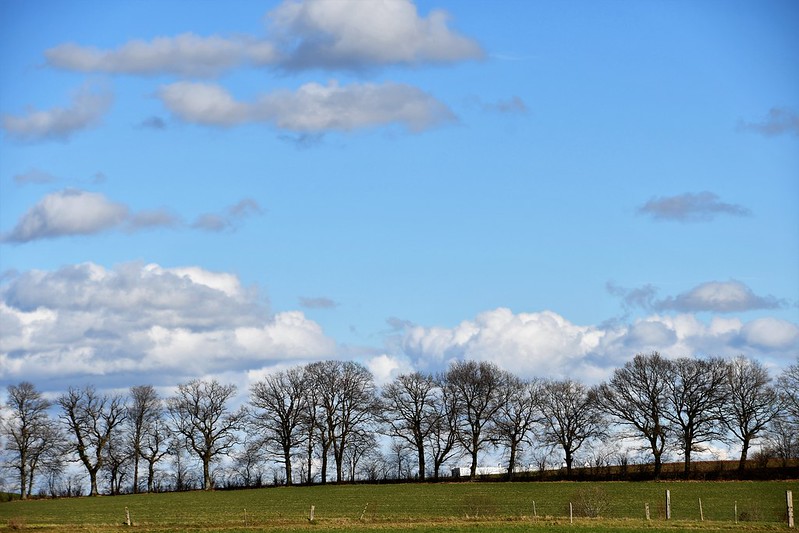 There are some picturesque views on the edge of the village and yesterday the clouds were also playing their part in the show.

Eventually I wheeled my way home, it was a short tour of one and half hours, but I was glad to get out in the fresh air, although there was a cold breeze blowing. Some of the apartment blocks were now also being renovated. Our was renewed two years ago and it seems to be the idea that when the building reaches the 20 year limit the outsides are given a fresh coat of paint and reinforced. I worked out that I will be 92 years old if and when our block is again renovated if I am still here.

And today is day if the week-end shopping again. The list is made with a few qustion marks. It is so difficult to think of something new to serve to the hungry population at my table and no-one seems to have any bright ideas.

As I left my home yesterday I noticed that my front garden is coming alive with its Spring bulbs, the nice ones. I hope you all have a good week-end before you and I will leave you with the Spring greeting from my garden. 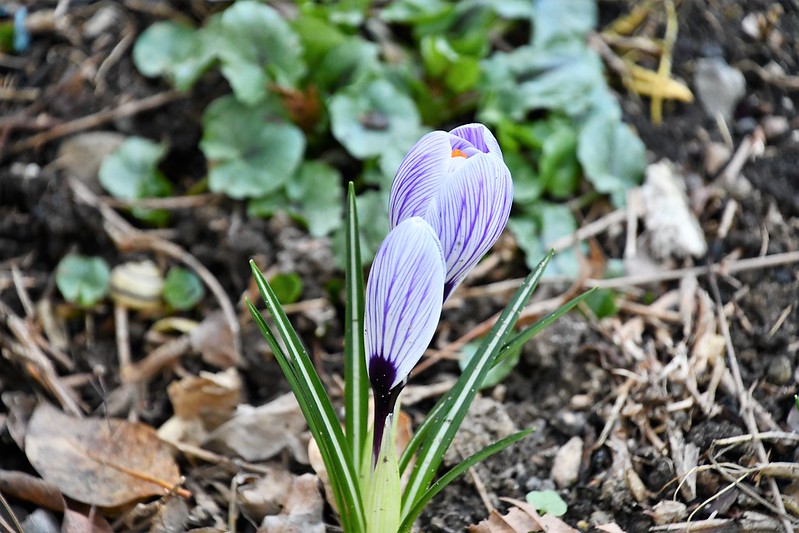