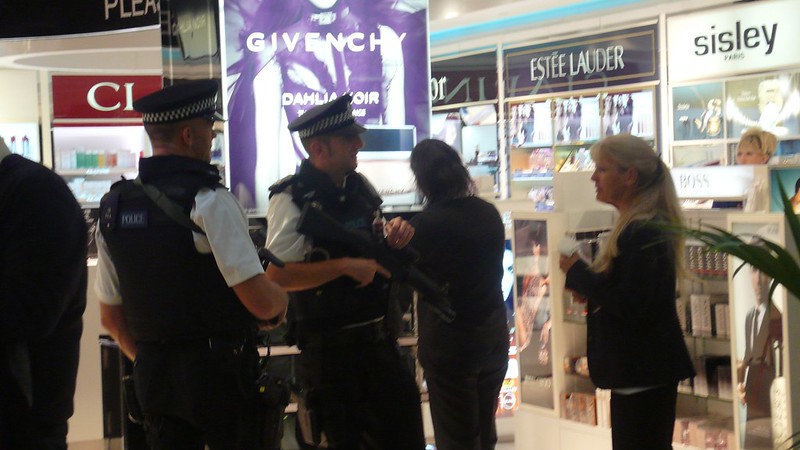 I would visit my dad in London every year as much as possible. He was then over 90 years old and I did not know how long he would be there. He eventually passed away in 2016 at the age of 100 years 7 months. As time progressed I saw the changes in airport security. It was never an exception to see armed police in the departure lounges. I was then becoming a golden oldie: a bit of a limp, sometimes with a stick but I was harmless.

What is wrong with having a toothpaste tube in you bag. I always carried the toilet articles with me as you never know if your case will arrive with your plane or not. London City Airport removed two tubes of toothpaste and confiscated them over the years.  The tubes were too big apparently. Only small tubes were allowed and so in the bin they went. I imagine airport personnel never having to buy their own toothpaste. They probably did a distribution of the confiscated tubes after a days work.

The most insulting was before I passed through the metal detectors: you know that arch you walk through after they had removed your hand luggage for the x-ray machine. If you happened to have a gun enclosed on your body they would find it. I was told before walking through to sit on a chair that they had suppled. I had to remove my shoes. I had no socks or stockings, in was Autumn and warm. I then had to walk bare footed through the arch and afterwards they gave me my shoes again to wear. I was glad that I had no mini explosives or razor blades hidden in the heels. I had left them at home.

And once, to set an example, they had taken my luggage out of the loading point. I was asked to identify it and open the case. I was told this was done now and again at random, and this time they had chosen my luggage. I was not very happy as it was the return flight from London to Zürich and I did have a plastic bag full of dirty washing. Luckily I had the Christmas Pudding and Cadbury’s Milk Flakes in my hand luggage.

There was also the time when I travelled from Zürich to London and arrived safely, but my luggage did not. It decided to make a detour to Lisbon. Two days later it was delivered to my friends house where I was staying,  by special courier. No problem, my friend had one size nightdresses and so I borrowed one for the night. This time the security programme failed it seemed.

Summing it all up I would say I had been through all the possible security checks. I wonder how they never confiscated my Swiss Army Officers Knife. Perhaps they assumed it was something that all Swiss have.