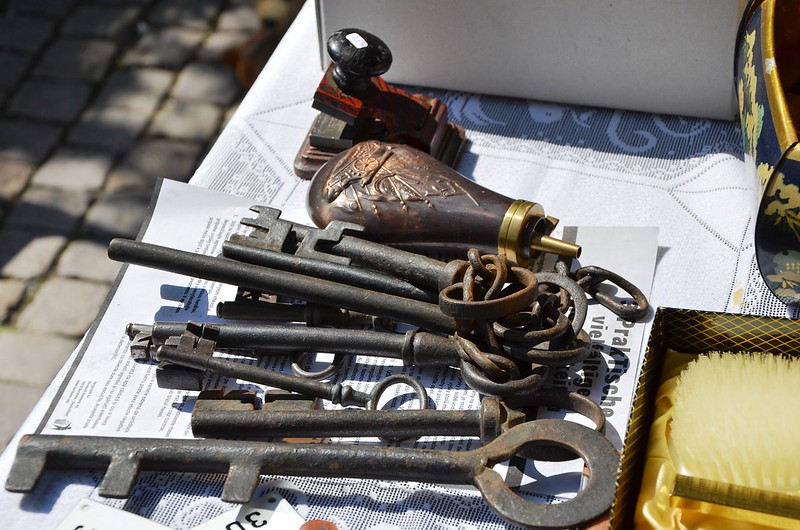 In the olden days they made sure that you did not lose your key. You could not even wear them on a string around your neck. I think they somehow hung them on their belt. As time progressed they got smaller.

I remember when my autistic son was about four years old. It was after breakfast and I was still in my dressing gown, not yet showered and alone with him in the apartment. I had to go to the laundry room in the cellar to put linen in the washing machine and left him in the apartment. He was playing and it was a matter of a couple of minutes. I returned to the apartment and the door was locked – from the inside. I had left the key in the lock and autistic son decided to turn it.

“Open the door son, I cannot get in.”

Nothing happened. I asked again. Afterwards I knocked at the door and heard a laugh from the inside, but No. 1 son still did nt open the door. In the meanwhile my neighbour herd the commotion and joined me in front of a locked door,  but still no response or action from No. 1 son.  Autists can be quite determined and often see the amusing side of the problem, which did not help very much. There I was dressed in my night attire, luckily covered with my dressing gown standing in front of the main door. At least I had a neighbour to talk to and this was at the beginning of the seventies when mobile phones were still an idea and a feature of films, but not reality. Eventually there was only one solution as No. 1 son had found this to be a great game. The neighbour let me use her phone to call a locksmith. Half an hour later he arrived and found the whole situation quite amusing. I was younger still had a shape and this was embarrassing to say the least being in my nightdress and gown.

I cannot remember the exact details, but he opened my apartment door, although I believe I had to have the lock replaced afterwards. I think it was a forced entry. I was worried about my autistic son and envisaged he had now progressed from the amusing to panic. What a mistake. We opened the door and he was standing in the hall with a smile on his face. Sorry, but child psychology was not my thing after more than an hour standing in the hallway of our flats with a few neighbours who arrived now and again to see what the noise was, and the locksmith who also found this situation something completely different. I think it brightened up his boring morning.

And son No 1? After we were reunited I did not hug him and comfort him, no. I got rather loud and perhaps my hand slipped,  nobody is perfect. No. 1 son no longer found the situation fun. I believe he even shed a few tears. This was more than 50 years ago, but there are some situations you never forget.