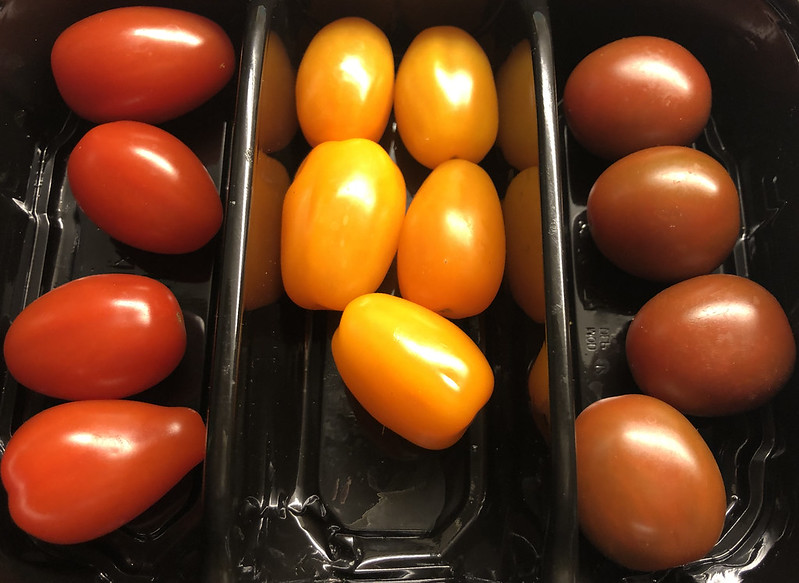 Anyone for a tomato. I remember the days when they came is larger sizes and were red. Red tomatoes were everywhere. I quite like a tomato, especially with cheese, but that is a matter of taste.  The trouble with tomatoes is that if you do not grow them yourself they seems to be quite tasteless from the supermarket. I suppose to feed the population with tomatoes you have to develop a system where there is enough for everyone. The result being that most tomatoes you buy have never seen earth. They are fed with liquids from a test tube or something similar. And so you get the wonderful tomatoes, same size, same colour, as if they were a regiment of tomato soldiers. In our part of the world most orginate under plastic in Holland. Yes, they are also sunlight starved.

Do they have taste? No, the taste is not important, the importance is their perfect shape and colour. We discovered that tomatoes from the fridge have absolutely no aroma, it has been killed by the cold. We began to put them in a dish in the kitchen. The first few days were fine, but suddenly their skins began to get wrinkles, they were prematurely ageing. We move on to the small tomatoes, and again the first day was fine, but they too began to show signs of wrinkled skins after a few days and were an attraction for fruit flies who have quite a quick reproductive system.

In the meanwhile I discovered that the tomato experiments were advancing. Suddenly we had pumpkin shaped tomatos, monsters in various colours. I was slowly out of my depth on the tomato range until I discovered the the mini tomatoes in 3 different colours, shape and sizes. This was the solution and they very rarely got wrinkles due to the new methods of preservation I assume. Perhaps they were bombarded with radioactivity, or sprayed with a preserving alcohol similar liquid. I had found the solution. I must admit I now keep them in the fridge and only let them out about an hour before we eat. to get the right temperature.

Yes there are now many varieties of tomato and we have the agony of choice.

12 thoughts on “FOWC with Fandango: Variety”