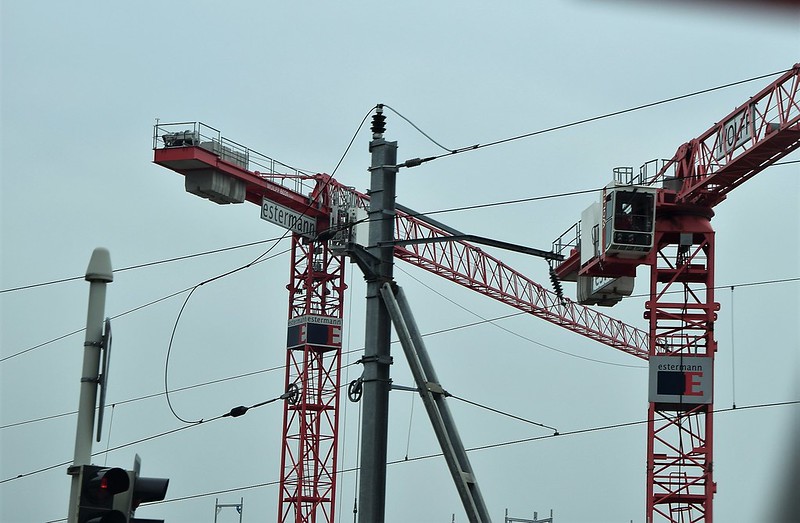 I saw my first automatic crane when I was about 11 years old. They were rebuilding London after 6 years of war from 1939-1945 where everything was bombed flat, especially in the area where I grew up, Bethnal Green, East London, near the dock area. If they did not hit the docks then they just dropped the bombs where they hoped there might be docks.

And so eventually in the fifties the big build began in London. Up to that time families had been living partly in what we called “prefabs” an abbreviation meaning pre fabricated houses, because there was no time to build new blocks of flats or houses. Families left with only ruins needed a roof over their heads. Our house, built in 1884, was still standing together with the street. The prefabs were square buildings with the necessary, no cellar or basement of course but they were all built in places where there had a little garden surrounding them. Indeed when the day came for their removal, many families were not happy. They now had a their own house,

And so eventually the bombed sites, which were my playgrounds as a kid, were removed. The half standing houses, which we would explore, with their remaining gardens. Flowers began to grow wild and it was strange to have a rose bush growing on your playground. The ruins were flattened and the cranes moved in. It was a first for me, mum and dad and fascinating. They would swing around with their arms, this was progress, although there was one small problem.

We then had a television, black and white, but we would watch every evening. It was the years of TV discovery. There were live football matches for the men, and the childrens hour which I watched every evening. According to how the crane workers left the crane when they had finished work, it could be that we would have an evening of disturbance on the TV. Not exactly white noise, but a black band across the screen. I never worked how the arms position of the crane, whether it was North to South, East to West, or anything in between, but our TV picture became a Picasso, accompanied by noise. If there was a wind blowing, there would be variations when the arms of the crane vibrated.

Today, approximately 60 years later, this would never be the case. Indeed the cranes very rarely have someone in the cabin. They are all steered by remote control from the ground, but the first steps of an automatic crane were first steps.

There are some childhood memories I will never foget.

4 thoughts on “FOWC with Fandango: Construct”