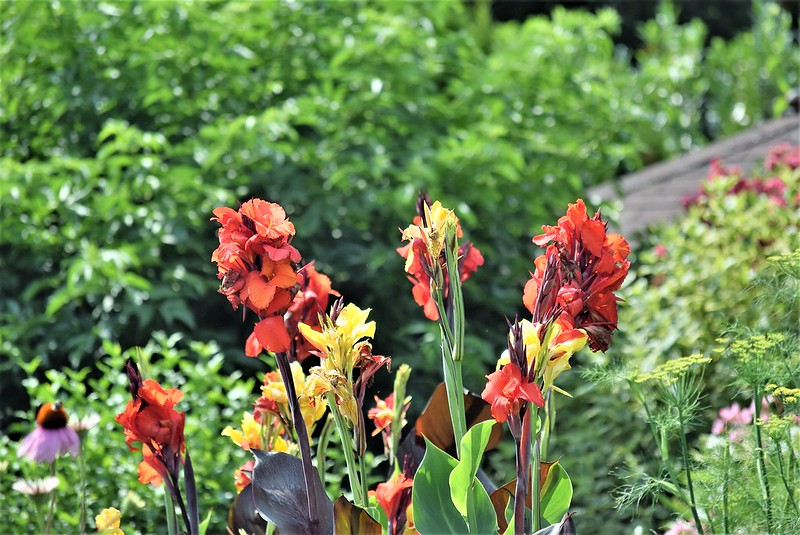 Canna, in cellar in Winter, but flowers every Summer.

A regular visiter in Summer. I had two pots full and would keep them in the cellar throughout the Winter. In the summer months I would have them in the garden and they would flower regularly. 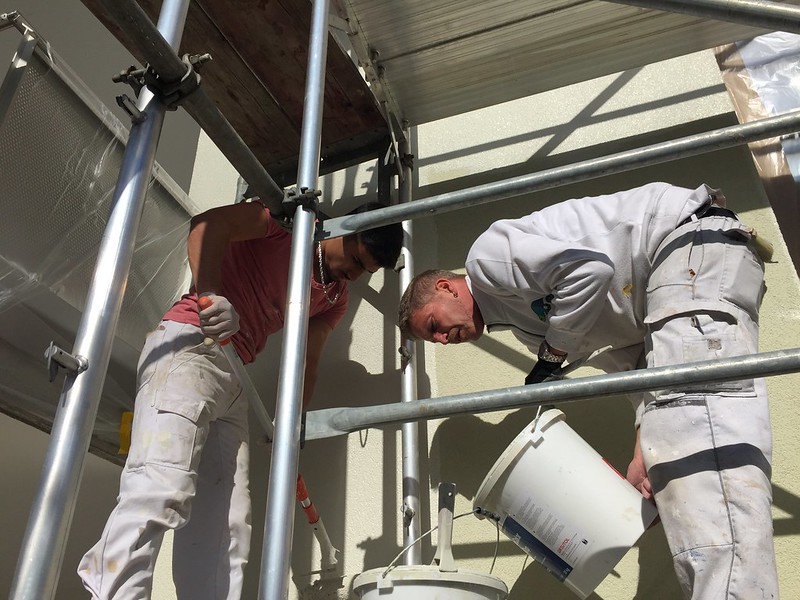 “But I said white, not yellow.”

“It is white when the sun shines on it.”

“And when the sun isn’t shining, it is yellow.”

“It is all a matter of interpretation. And it will get dirty with time, so who cares.”

“I suppose it will.”

“It is like everything. At first it looks clean and when the paint scrapes off the true colours come to the surface.”

“There must be a moral to that one.”

“Not really, just life. Politicians do it all the time.” 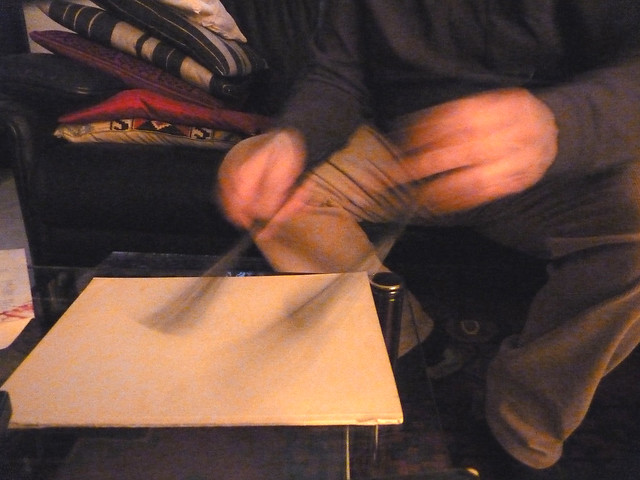 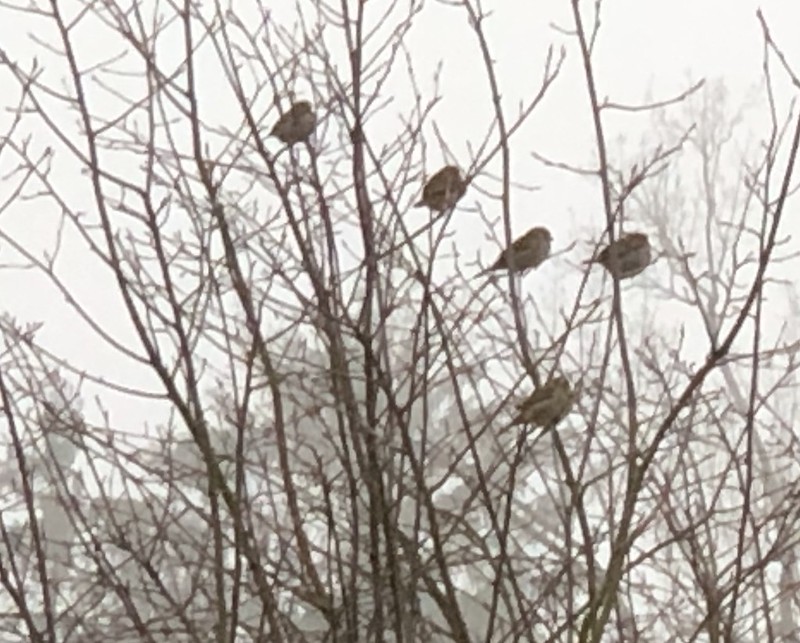 Do you ever get the feeling that you are being watched? The sparrows seem to be waiting for something. They got their bread crumbs, but that was no enough, so they are now sitting in the tree oppositie telling me to fill the bird feeder. They are never satisfied. OK, I did not bother yesterday because there was still some seed left. This morning it was empty, but surrounded by the seeds that fall out and I find they should eat those as well. I am not only feeding Mr. Swiss and No. 1 son here, but a cat and flocks of sparrows and crows. 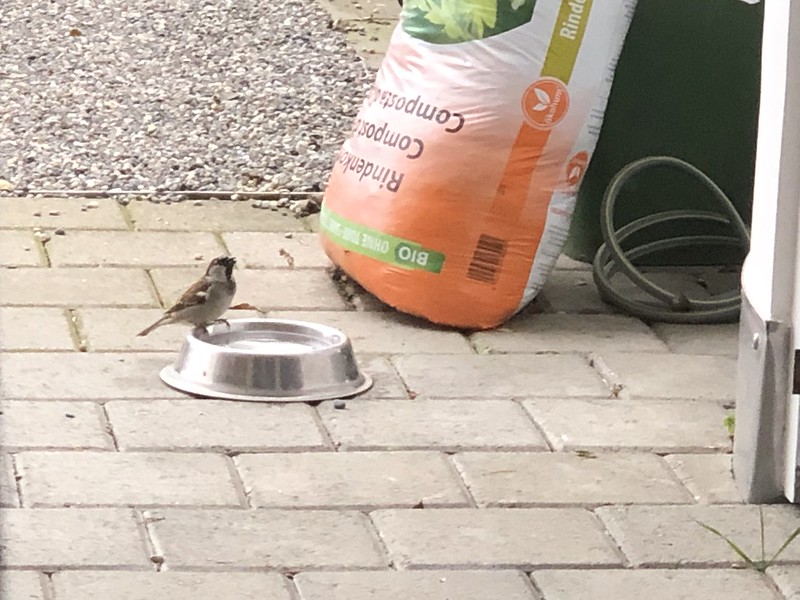 Now and again a sparrow needs water to wash down the bread crumbs and helps himself to the water left outside for our cat. One of my first chores of the morning is to remove the ice out of the bowl and refill it. Tabby waits for me to do it and take the first taste of the morning. It has become a ritual with her. She waits patiently on one side for me to complete the work.  I then move on to her recycling tray. Since she has kidney problems I have become very careful with her surroundings and keep an eye on how much food she eats.

I almost decided to go somewhere yesterday as we had an hour of sun after lunch, but it decided to disappear again and we were left with the grey skies. No. 1 son went into town but even he said it was cold, and he is usually not so impressed by the weather situation. Although it has not snowed again, the remainders are still laying on the ground and are not hurrying to melt. I decided to stay at home with my computer. I also had an online bill to pay for my annual road tax. Since having my own car I realise all the little extras that have to be paid.

I at last finished my book, the fifth and last up to now in the Invisible Library Series by Genevieve Cogman, “The Lost Plot”. I no longer have so much time for reading, since handling the household single handed more or less, but I have read all of her books. I have got to know all the characters and each book plays in another period of history and situation. The last took place in Paris at the turn of the centuary. The Invisible Library characters are able to travel to libraries in other places and times when they are in search of a special book. It is a bit of fantasy, as not only are the staff of the Invisible Library are featured, but also dragons and faes.

And now to the next book. I am always being recommended books by Amazon, although not all are to my taste. I pick the interesting books out and have a list so that I know what to read next. I think my next book will be “Eleanor Olliphant is Fine” by Gail Honeyman, of which is film is planned and is on the best seller list of the Sunday Times.

And now to move on. It is Wednesday and another shopping day. I noticed we have only one bottle of Pepsi, so that is on the list. I am so glad for the nice young men who work in the supermarket and always oblige with lifting the heavy crates into my shopping cart. Mr. Swiss also managed to break two of my favourite cups over the week-end, so I will have to replace them: nothing exclusive, but just my size and taste, as accidents can happen.

Enjoy the day, make the most of it, see you around. 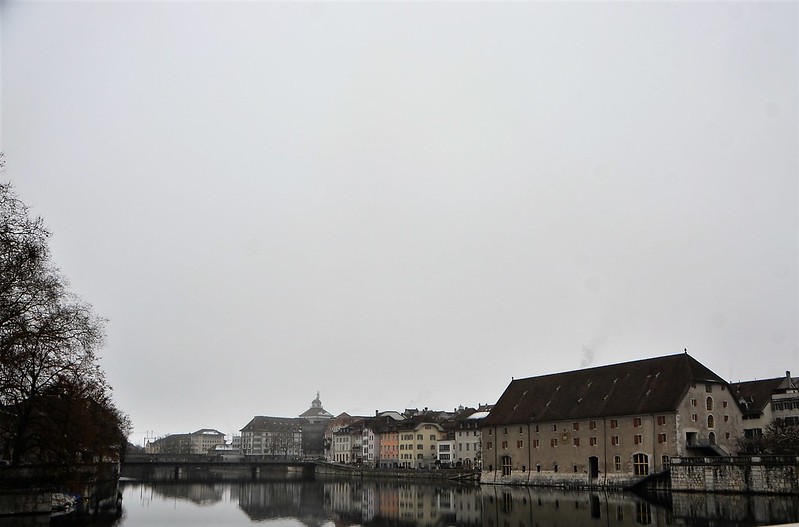