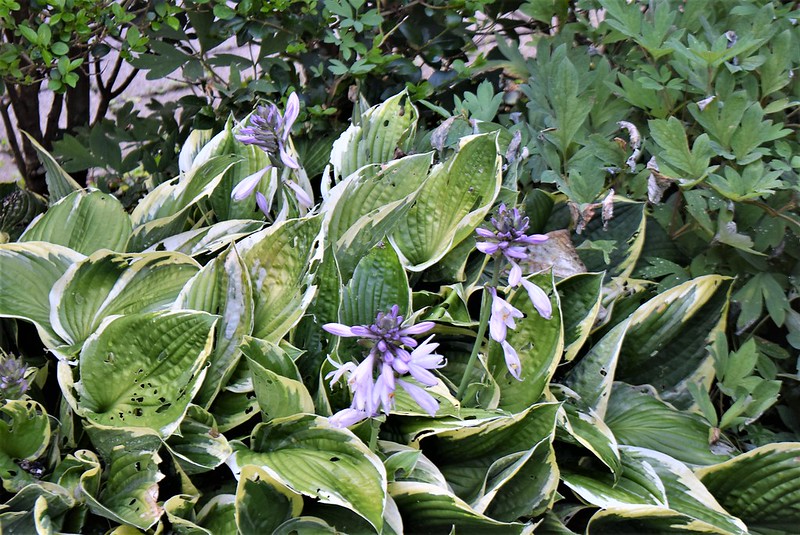 I have two sorts of hostas. The ones with the big dark green leaves and the others. These are the others. I notice the snails leave the big leaved variety alone but go for the variegated sort with their 600 teeth. Must be a matter of taste, but they left a few flowers which were probably not edible. 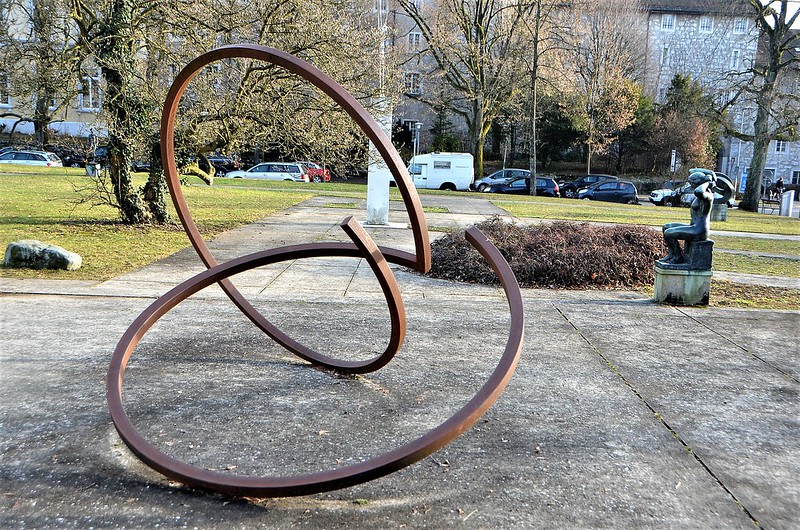 “But it must be something.”

“Well I suppose it could be anything.”

“Someone must have liked it to put it where it is.”

“I am sure it must represent something.”

“You have to use your imagination.”

“What’s that naked lady doing next to it.”

“Typical man. This sculpture looks like nothing and already your eyes have wandered to the naked lady and she has been there for years.”

“I never noticed her before and she is really something.”

“But now you have started to look at anything, which is actually nothing, you have discovered the naked lady.”

“It was somewhere in town.”

“I thought I would go along and take a look.”

“Suddenly, just because of a naked lady.”

“Of course not, it is all in the name of art appreciation. Where is somewhere in town?”

“Cannot remember, nowhere special. If you really want to see it, stare at my photos.”

“It’s not the same thing as when it is real, photos could be anything.”

“And there we are again, back to the beginning.”

FOWC with Fandango: Anything 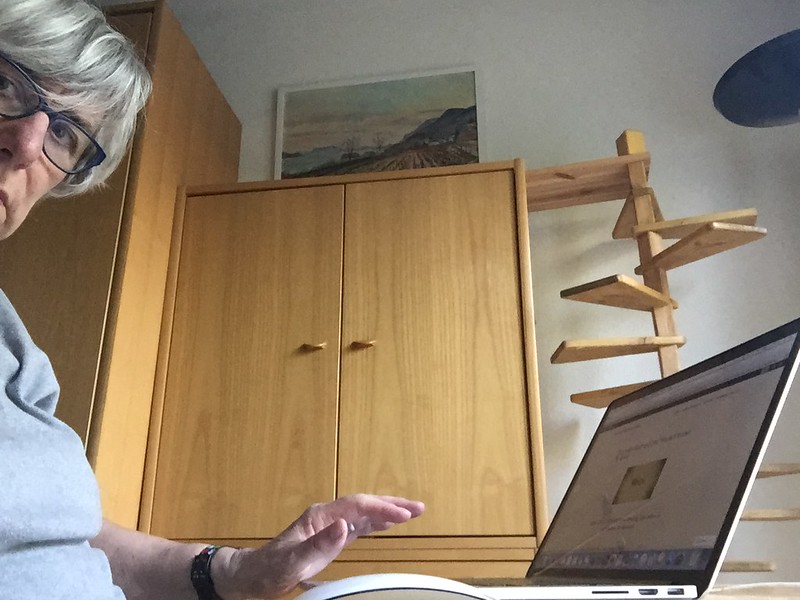 No reports on walking with MS today and wheelies in the chair, that does not need effort, just hope.

No, I was reading a blog that someone wrote about the usage of words to express yourself. I write daily 3-4 pieces, sometimes more photos than writing, but I have a problem. Of course I know what I want to write, but over the last 50 years of living in a country that does not speak english, my brain has become more than bi-lingual. Ok, of course I can still speak english, my mother tongue, although to be honest my mother tongue was cockney, the dialect spoken in East London, and they say you are a true cockney if born within the sound of Bow Bells. Although I lived all my England life within the sound of the bells, I was actually born in Hertfordshire, Hitchin, because it was after the war and there was no room in the London hospitals for mum, so she had to go to Hitchin.

But to continue, I moved to Switzerland, a country where they have four official languages, one being German where I live, but again a dialect of Swiss German (Schwyzertütsch). I speak this strange dialect all day and so my brain has now become also bilingual and it is all about finding the right word to use. Language moves on, advances, and new words are included. All these new words that appeared after I settled in my Swiss German frame of mind (1969), were unknown to me in English. Just a simple example “tights”. I grew up with stockings and then the tights appeared, and so I would buy “Strumpfhosen”. How was I to know that the english word was tights.

And so I sit at my desk with the computer and begin to write and then I have my first problem. Of course I know what to write in German, now what was the english word for it. My next step is LEO an online dictionary which I open in another tab on the computer, because I cannot remember the english expression.  Yesterday I had the word “annullieren” in German which I wanted to use in English, so I was off to the online english-german solution and found it was “delete”. Of course, how could I forget it, but “annullieren” was what my brain said.

This happens continuously, my brain is a two track mind in two languages, or is it three or four. German is what the Germans speak and so we have to know the language in Switzerland as our normal daily Swiss German dialect is not always understood by the Germans. And then I have my original cockney, although of course I also speak the Queen’s english, perhaps not so queeny.

Mr. Swiss speaks perfect english, and I speak perfect Swiss German. Our kids speak Swiss German but understand english and No. 2 son needs his English for his work, often attending english speaking conferences, although his French is just as good, so he has become sort of trilingual.

I must say I feel more comfortable with choosing a (Swiss)-German word, because I am speaking and using them daily and there are even words which I have not yet been able to translate. “Stufenlos” would be stepless, but it is applied to those switches on electronic gadgets that do not do off and and on, but gradually climb and descend – get me? Perhaps.

Anyhow it needs effort for me to write in an english that is english, at least I hope it is english. Even Mr. Swiss corrects my English now and again. 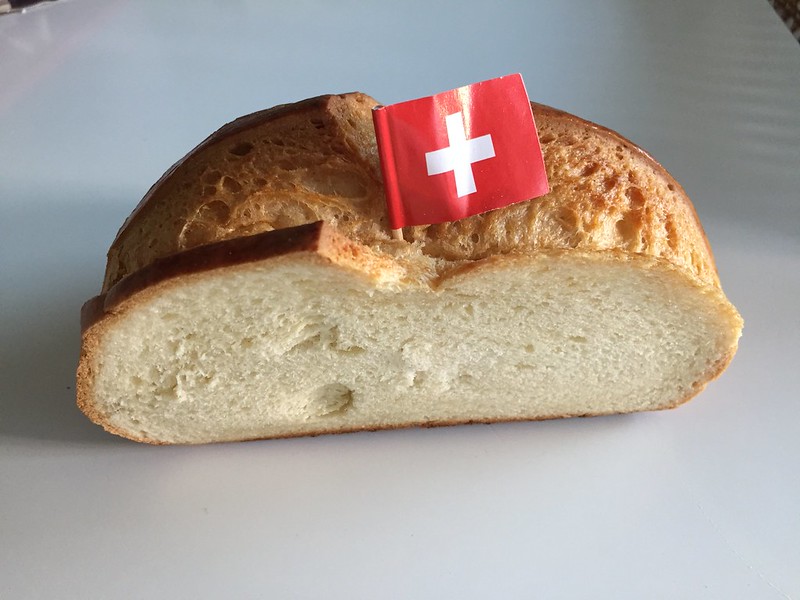 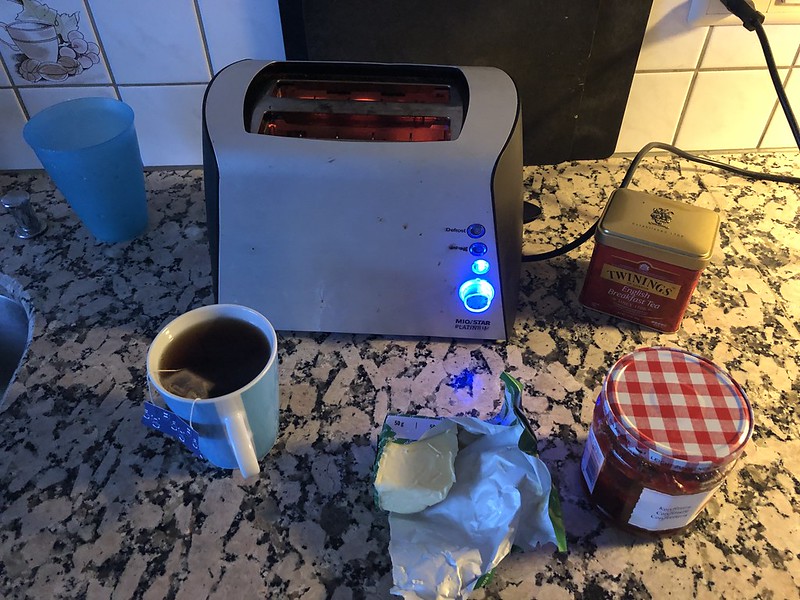 Breakfast, at least there is something worth getting up for. I happened to have a remainder of toast bread from yesterday, so decided to treat myself for the first meal of the day. Nothing special, but something different. Mr. Swiss is always astonished that I am already up at 7.30 in the morning, but I look forward to the first hour of peace and quiet. He was already up for a coffee and rehugged the bed afterwards. I like to be on my own for the first hour of the day, doing my usual routine and organising. Afterwards sitting at the computer with breakfast. Note there is no coffee included in my breakfast, it does not agree with me, so just a cup of tea, no milk, cream or sugar, and I am happy.

We had rain yesterday which I was not sorry about. It cleared the snow away from the roads and pavements, although there is still plenty left. 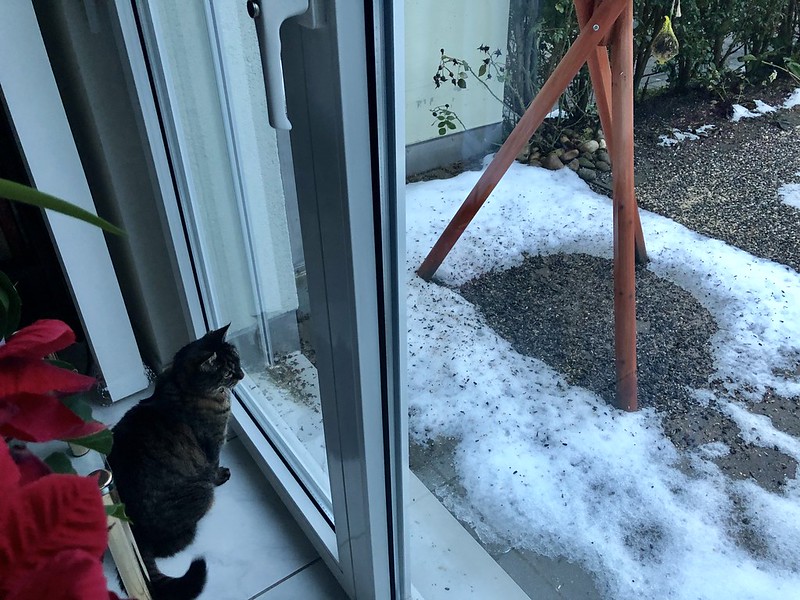 Tabby is hoping that it will disappear today so that she can go for a walkabout. I would also like to go places today and hope that the brightening up this afternoon as promised by the weather guys and girls.

Yesterday I made my round of the supermarket for the week-end shopping and I do not intend doing any more shopping until Monday. I had four bags full when I got home and I ask how much can a family of three eat.  As our garage is underground I park my walker when I leave, as I have the supermarket trolley otherwise. When I arrive home I strategically place the bags on my walker. When I first began to do it all on my own, I only carried one bag to the apartment and my son fetched the rest later. Practice makes perfect, and I can now balance 3 bags quite easily. On Friday there is always a fourth, and No. 1 son fetches it afterwards. 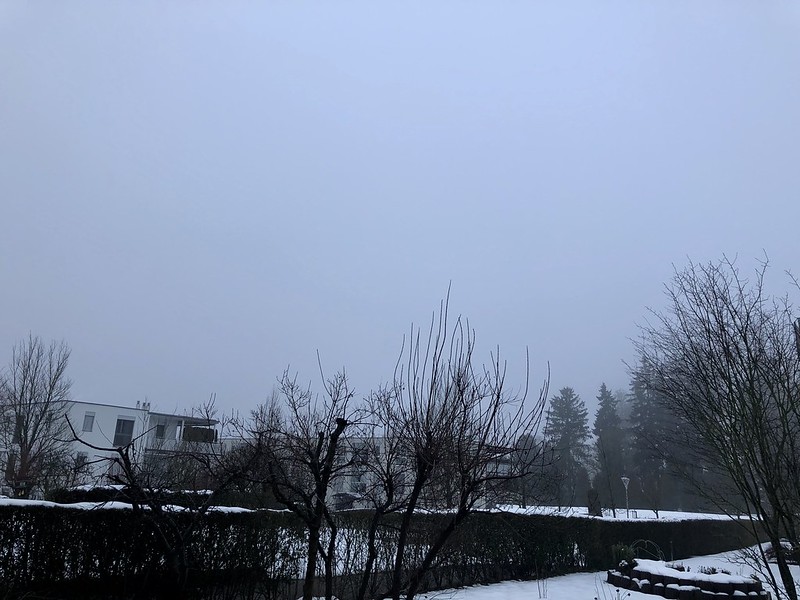 I just heard the village church bell telling me that it is already 9.00, so I will move on, although Saturday is not such a stress day. Stress? No, golden oldies only have their self made stress. Today we must fill the bird feeder. No-one wanted to wade through the snow to get to it this week, but there is plenty on the ground so I left the sparrows to tidy up a bit. We really only get sparrows now, since we had the garden replanned and the lawn removed. Of course there are the crows but they prefer the wide open spaces.

Have a good week-end and make the most of it. And golden oldies be careful how you walk, especially if you have ice underfoot. 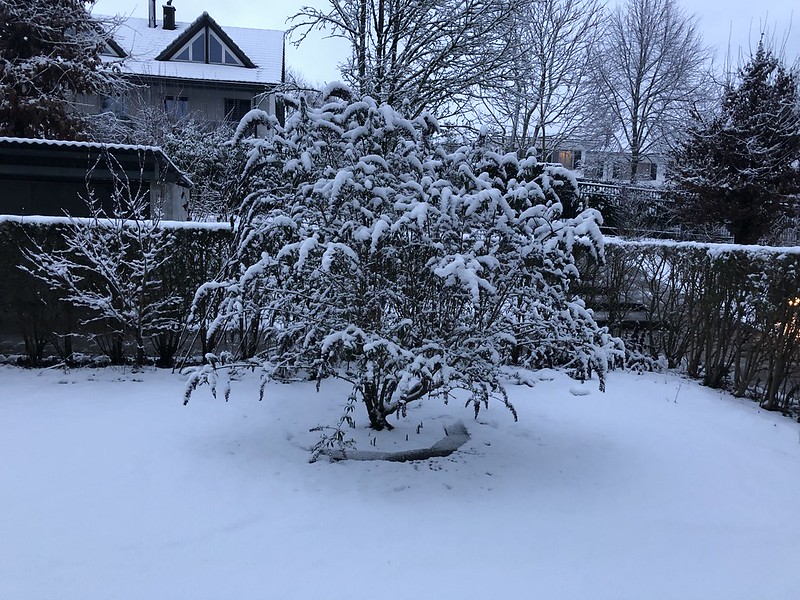