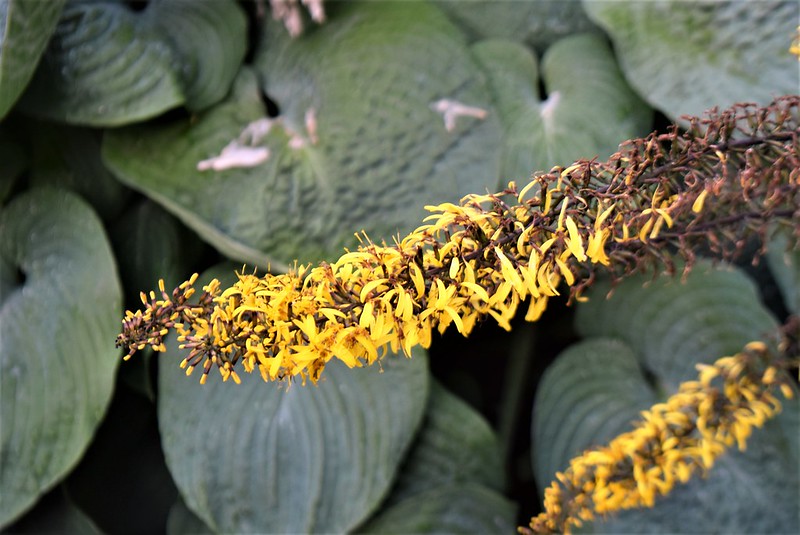 One of those plants that refuses to go away in my garden. I have shifted it here and there but there is always a remaining root somewhere. I quite like it and read that they like damp places, also known as Elephant Ear or The Rocket. 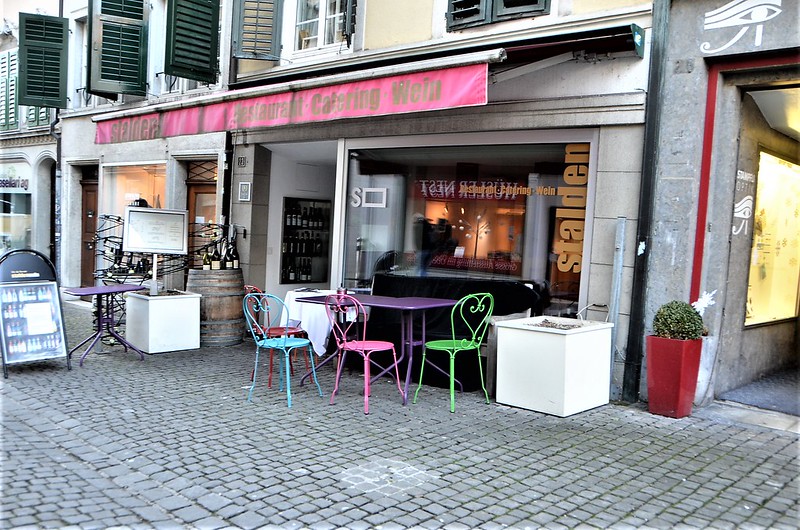 Doing it with a splash of colour 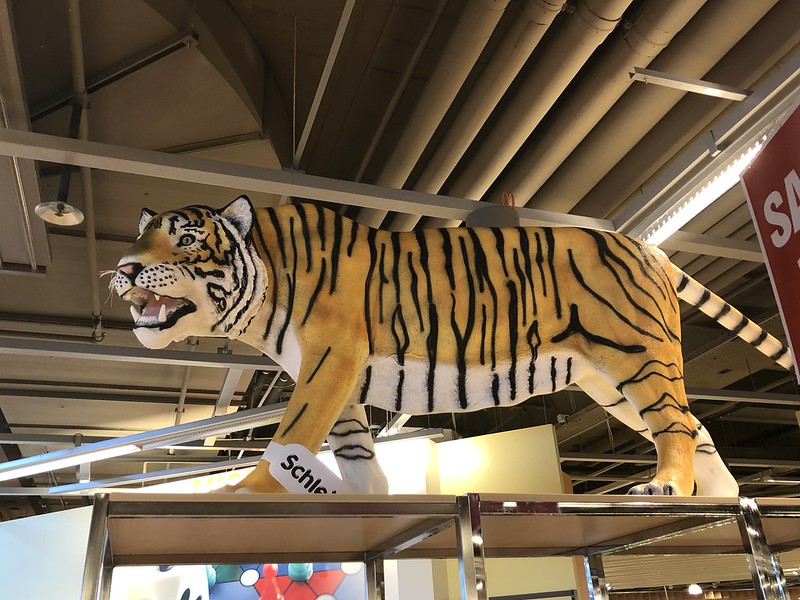 A tiger in the supermarket 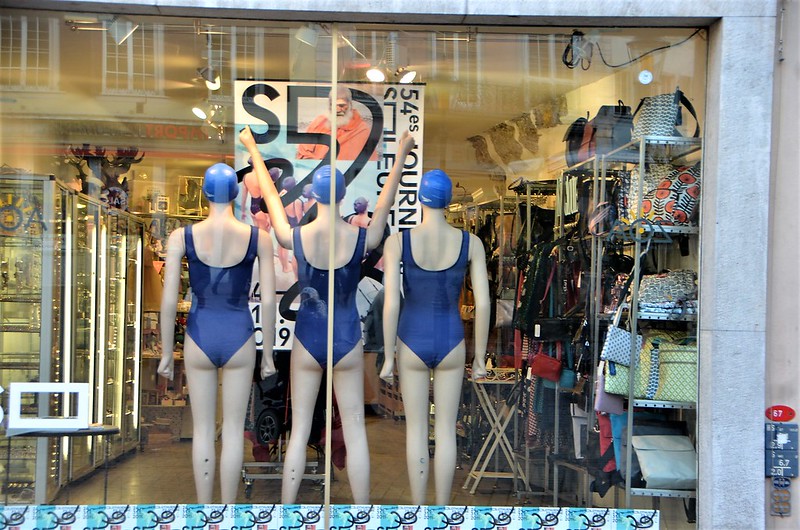 These three ladies were seen in a shop window 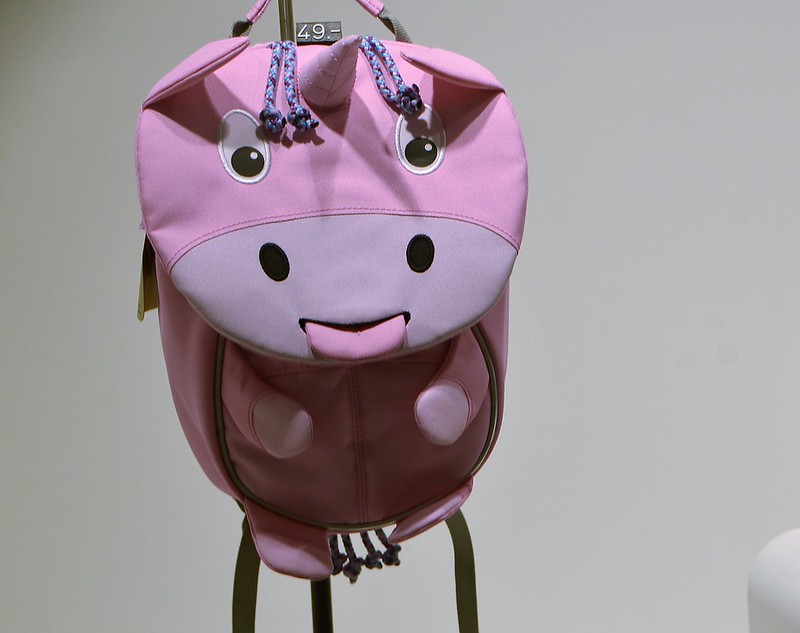 Anyone need another new handbag 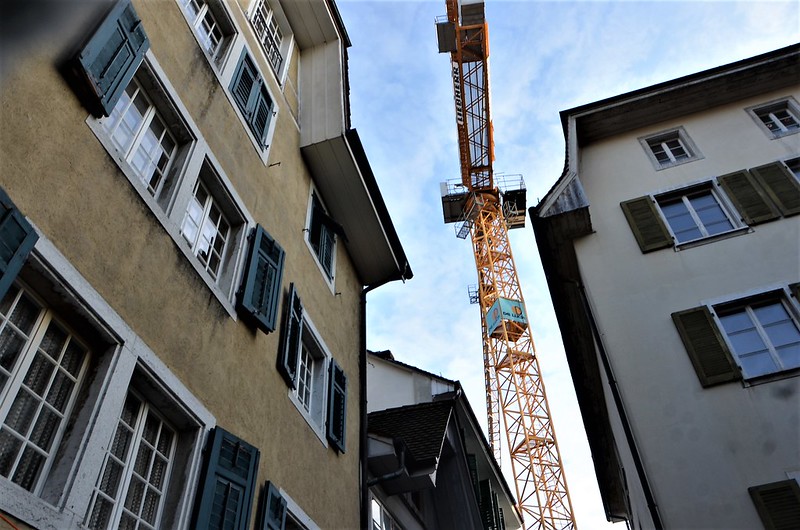 I live near one of the oldest towns in Switzerland. During a walk through the Romans decided it was a good place. A river was running through it and they could even build a couple of villas, proof of which was found near our hospital building. There were even Roman baths, and every time something new was planned, the building site had to be shifted or there was a delay as they had found yet more traces of what the Romans once built.

But undaunted our town continues and it seems that yet again something new was being revised with the need of a crane. Where do you put a crane when there are narrow streets? No problem, where there is a will there is a way, and our town leaders always find the solution and every gap, no matter how small, can be filled even with a crane.  I was touring around in town with my camera and noticed this crane that had squeezed its way in between the buildings. It was very tall, but fitted well in the small gap left. Nothing is too big for our ex Roman settlement. 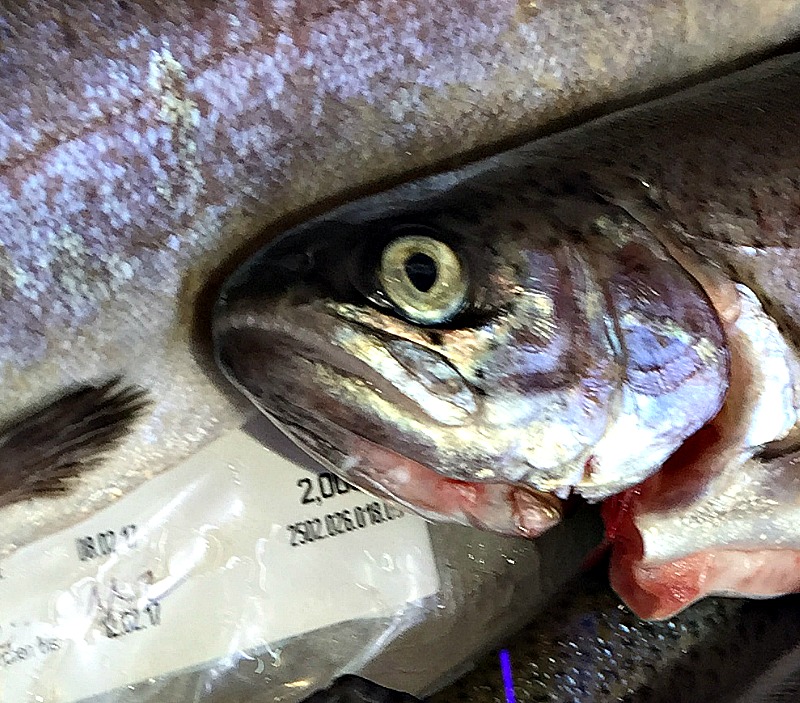 When I arrived in Switzerland my eating suffered an eclipse
I sat down to a plate of fish, but I could not find the chips
The Swiss eat them with potato, boiled with butter too
But something was missing, they really had no clue
They eat them with mayonnaise, and spread it on the fish
There will also be a side salad so what a curious dish
I grew up a Brit and fish and chips was our tradition
But this was now the crime of the centuary, bordering on malnutrition
How can you devour a fish without the chips and vinegar
This was now barbaric, it called for a prime minister
There was only one chance that demanded a compromise
I served them with chips with salt to have the normal fries
A tube of mayonnaise was on the table to celebrate a truce
And now Mr. Swiss and the kids could put it to their use
Just look at my photo, this fish was quite annoyed
He was eaten with the mayonnaise, this was so paranoid 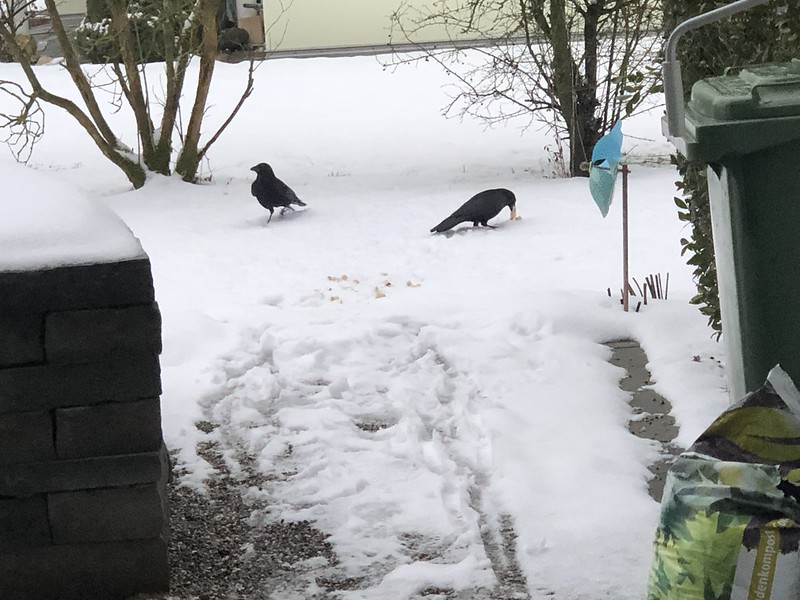 I awoke with mixed feelings this morning. Would everything be covered with a new fresh layer or snow? Well it was not, it was the same old snow as yesterday and even temperatures are now 0°C, meaning there is a chance of a melt, which has already began at the edges.  The weather forecast said snow at the foot of the Jura and that is almost us although we are perhaps a small footstep away. It did not snow here and so roads are OK for driving. How the possession of a car changes your attitude to the daily life.

There is nothing spectacular happening above, skies are grey, just like the snow they contain, but the crows are here. After I put out their bread I heard them cawing from tree to tree. I wonder if it was crow language for “grubs up, come and get it” and shortly afterwards the first two arrived, took a beak full and flew off with their trophies.

Yesterday was another day at home as there was no visit to the store. I will be doing that today for the week-end shopping. We have made our list, at least I did. Mr. Swiss just nodded in approval.

Yesterday I received the offer for my shower renovation with a built in seat on the wall and a wire tray for the soap, as well as a grip on the wall. It is not cheap of course, but what I expected, so i told the plumber guy to go ahead. He said that if our wall is OK (which I am sure it is) he will have it done in a couple of hours.

If you are in Facebook, you might see those ads for useful stuff now and again. I also get them, but never bothered. Now it seems to be the idea to have small bags to hang on your shoulder or grip with divisions with zips for all the modern gadgets. I decided to order myself one. Since driving the car again, I no longer need my big bag to hold the camera as I cannot take photos when driving and my mobile camera does the job well if I see anything in the store or surroundings.

This new all in one little pouch says it can hold any size of a mobile phone, of course my purse, and all the other bits and has a section for the plastic cards. I can hold it in my hand or hang it on my shoulder with the provided extension. I had a look and decided to take the plunge. I had never heard of the company but it had half a french name “Pierre” something. It was not so expensive and I am even getting track and trace which is updated daily. 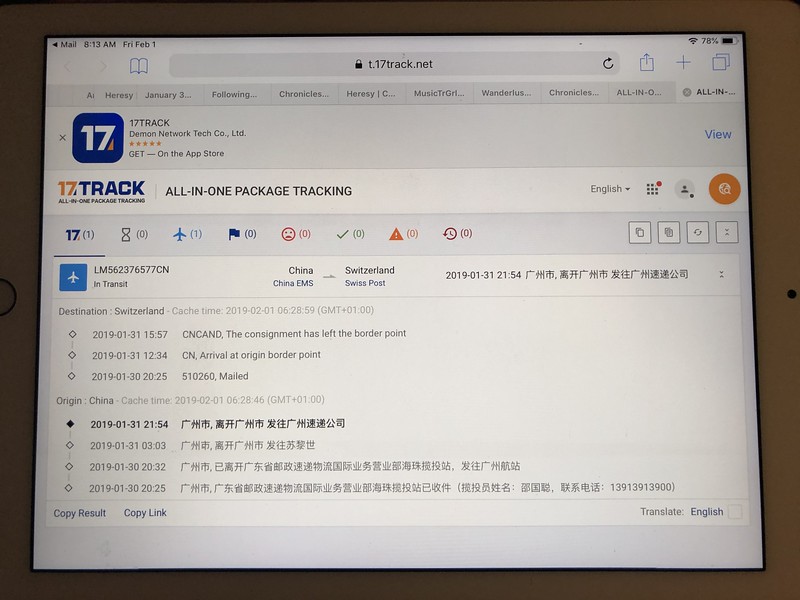 Pierre seems to live in China and I do not speak Chinese, but can alter it to english, although I was astonished to see where this small pouch was coming from, departing from Guangzhou in China and since yesterday it is on a plane bound for Zürich. Transport is free apparently. Even the Chinese have their own Track and Trace system. Naturally I am now getting a daily push report from the company to buy their other wonderful goods, but that is not a problem. I delete it with the other trash I get daily.

So when this bag arrives from China I will let you know. Although the bag I use at the moment as plenty of room, my purse is bursting at the seems and my telephone has to find its own place.

And that is today’s news from the snowy village at the foot of the Jura mountains. Have a good Friday, and I hope the States are no longer freezing so much. 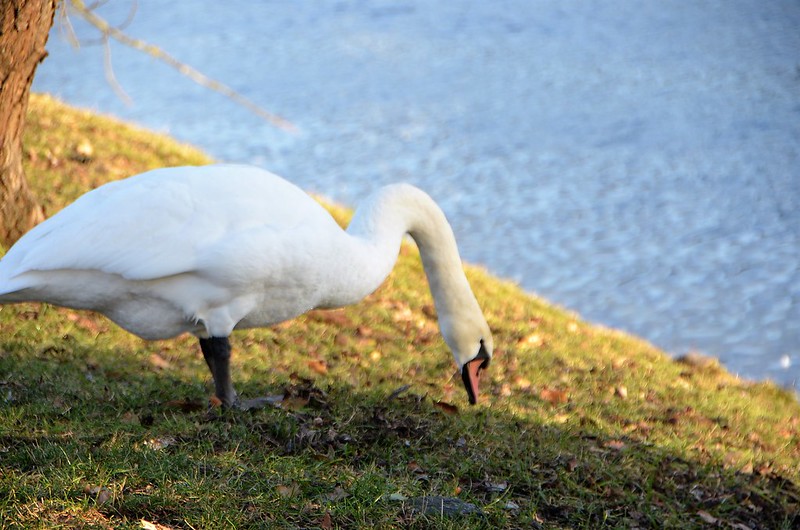