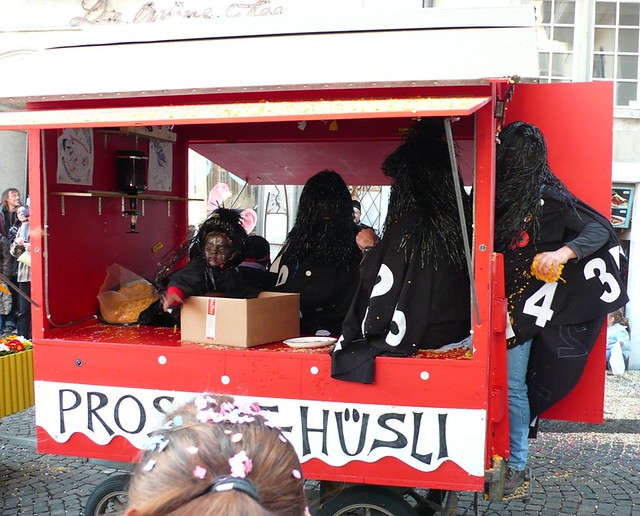 It will soon be that time of the year again when the night turns to day and strange costumed people, or perhaps they are not costumed, will be roaming the streets. In various parts of Europe it happens and goes under the name of carnival. Either you live in an area where your town changes it name to Honolulu, as Solothurn does,  or you do not. Our town becomes something completely different. Luzern also celebrate at the same time as Solothurn and Basel, the biggest carnival in Switzerland, is a few weeks later.

Every town has its own timetable and our town begins at 5.00 a.m. in the morning some time in February. I am not sure how the calendar works, something to do with Ash Wednesday which is usually included, but at the beginning the town is populated by figures dressed in white nightshirts with a night cap and tasse, and everyone is wearing a red scarf around their neck.  Of course you carry something that makes a loud noise: a cow bell, ratchett, drum – the louder the better. Me? No thankyou I prefer to spend the morning in bed and let the others make the noise. In the afternoon there is the childrens parade and many are still roaming the streets dressed in their various costumes.

This goes on for a week, ending with a bonfire in the middle of town where a large dummy is burnt to celebrate the end on Ash Wednesday. In between there are masked balls, two processions and a lot of tired people. Some might take the week off work and others battle on, falling asleep at their desks in the offices, trying to camouflage themselves from the boss.

It is all to do with camouflage and generally if you are in one of the carnival restaurants, the masked will enter, sit at your table and begin a conversation with the words “You don’t know me, do you?”, which is clear as they are in disguise and the the joke and the fun begins, unless you are not a carnival person and it could annoy you (like me, that is why I avoid it when I can).

There are various organisations that spend time and money to make the whole carnival a success. You wear a badge if you attend any official events, as the processions, which are not cheap, but show the theme of the annual event. As said I do not partake, too many crowds, but who knows. I might venture into town on one of the quieter afternoons for some photos, as a I did a few years ago when I took the last photos. 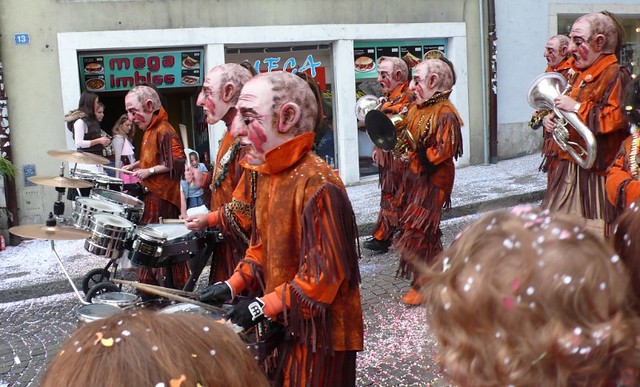