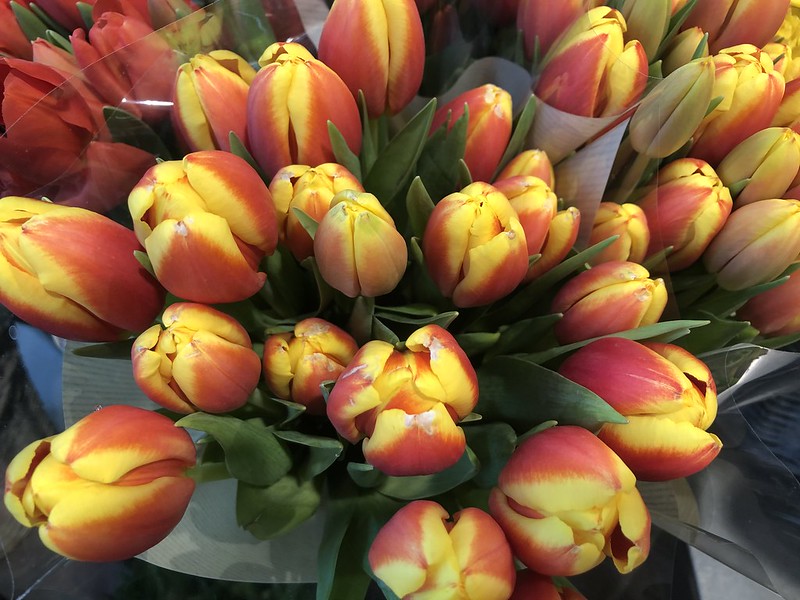 As we seem to be in a tulip mood today, I thought I would show mine as well. The first time I saw them in the local store today, not yet open, but they want to sell them so that you can watch them unfold at home. 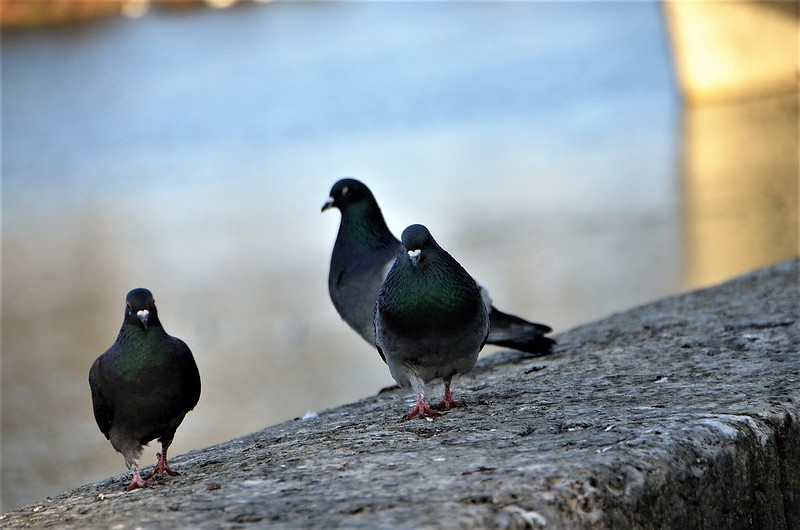 “Look there are bread crumbs on the wall.”

“Tell me something new, they have been there since this morning.”

“Well let’s eat them before they disappear.”

“Old breadcrumbs from this morning? Forget it.  Just be patient, that human just bought a hamburger. Watch him, he will throw the empty box in the trash can and then I will pounce. Nothing like hamburger bread with all the accompanying juices of the hamburger.”

“Where you flying off to, leave some for me.”

“Sorry first come, first served. Go find your own hamburger man, or eat the crumbs from this morning.”

“Have you heard the latest. They have just finished serving breakfast at the restaurant. The bin is full of half eaten croissants and that bread with the seeds on it.”

“Go eat your hamburger, I am having a meal of seeds.”

“What are those gulls doing here?”

“Eating breakfast of course, we heard it on the news. You pigeons are broadcasting it everywhere. Cannot keep your beaks closed. ” 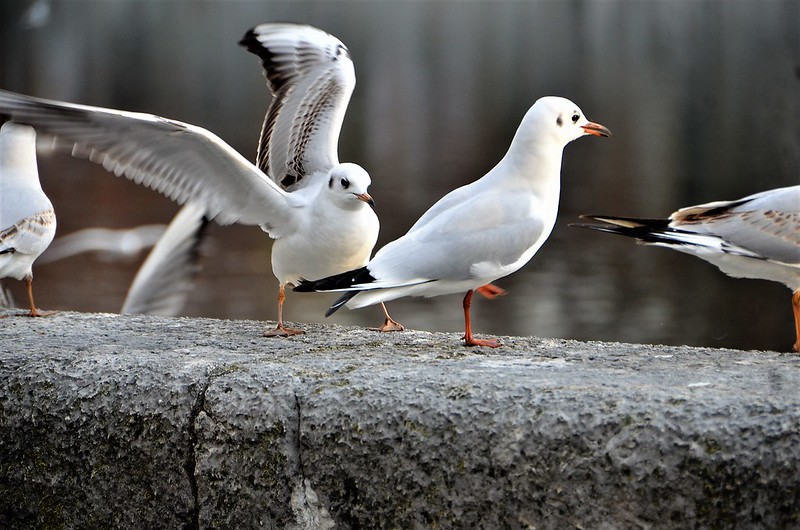 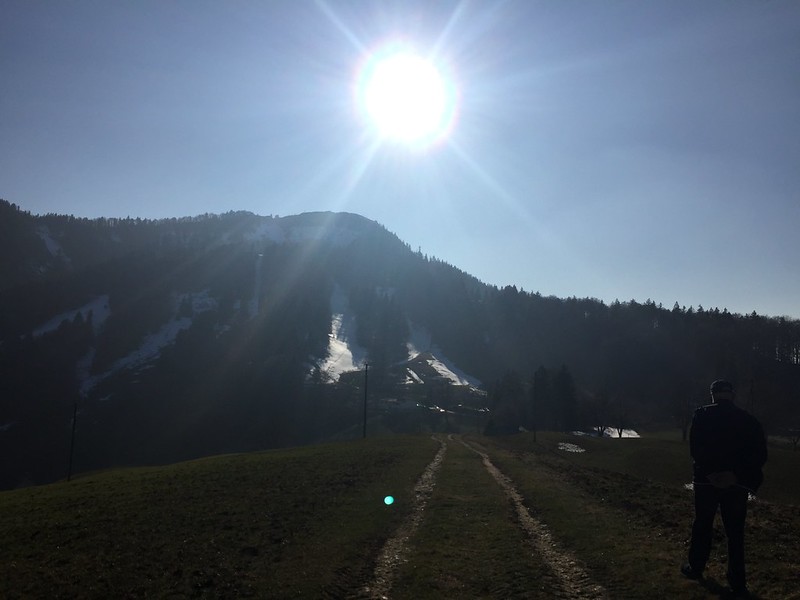 Lust zu Wandern hab ich schon, but my body does not agree
I used to follow the paths everywhere, and the sights were great to see
The sun would shine on my weary ways which I followed wherever they lead
But today I just look at the photos I took, and know I could not succeed
We saw the sea of fog from the mountain tops, and swam in its wonderful mist
On a clear day we saw villages and towns, like dolls houses they would exist
But that is all so long ago, long walks are no longer so possible
The steep slopes that mark the mountain way are absolutely not crossable
And so I sit and examine the photos and see how it used to be
Today I am thankful for the years when I could and reflect on it all with glee
Perhaps one day I might do it again, but Wanderlust is a thing of the past
So treasure the days when you are young and fit, perhaps they may not last 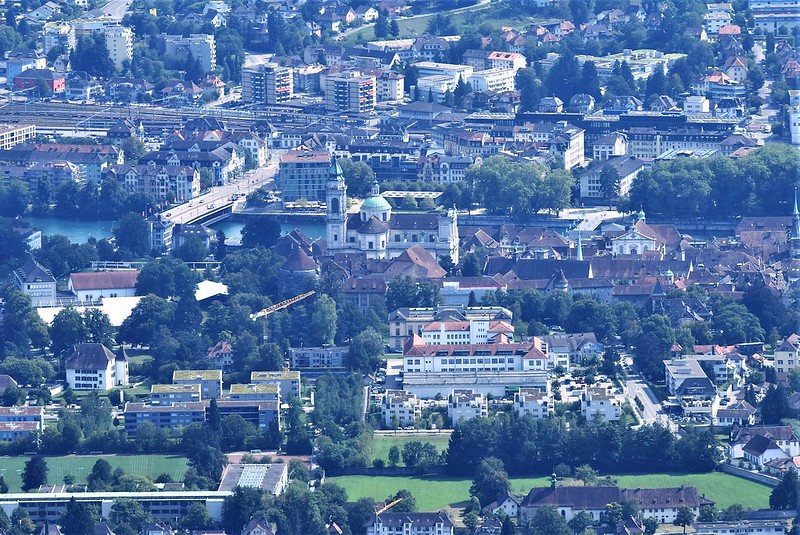 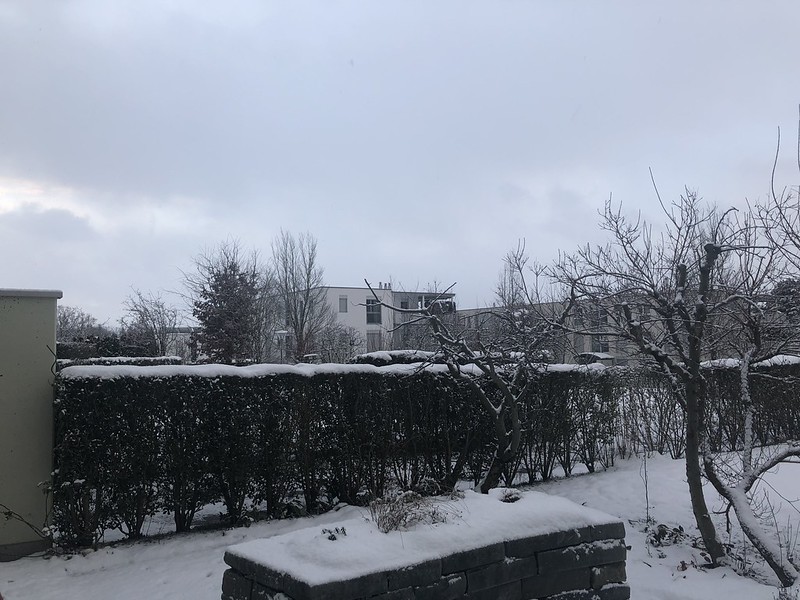 Yes, another snowy morning, although the weather forecast did predict something like this. They said that there would be high winds, which is also the case. It was also forecasted that the main weather problems would be in East Switzerland (Zürich region) and in West Switzerand (Geneva etc.) so as we are in the middle we have no main problems, just problems. It began with big flocks when I stopped hugging the bed, but they are now smaller and drifitng around because of the wind. It is now 8.30 a.m. and I leave around 11.00 for shopping, so hoping everything will settle down by then and the roads will be clear. I remember my working days when I had to leave at 7.00 a.m. in the morning and in Winter you were glad to arrive in one piece at work as it was early to have anything decent done on the roads, although the workers were already out at 5.00 a.m. doing what they could on the roads.

Due to the weather I am more homebound at the moment in the afternoon. We managed to get to the vet with our cat yesterday afternoon. It was not snowing and the roads were OK. It was just a little complicated because both me and Mr. Swiss have our problems as golden oldies. I drove him to the vet, and Mr. Swiss managed to take the carry cage in one hand and climb the steps, whilst I looked for a parking space, which are very few and far between in that area. Every time I found a place it was in a space at the side of the road and there was some traffic, so either I blocked the road with my manoeuvres or moved on. I moved on as there are some things I am not very good at. Eventually I found a place on the pavement, not obstructing anyone. As I have a wheelchair sign and permit on the car, I was hoping no-one would get annoyed.

When I eventually found Mr. Swiss Tabby had already had her claws cut and been jabbed. The vet said it might be a good idea for a blood test to see if the kidneys were working OK, we get the result today. Otherwise she is not in bad shape for a 16 year old feline. She had lost 300 grammes since the last weigh in a year ago, but we all lose weight when we become golden oldies.

The vet carried the cage afterwards to the car and then we were off home. Why do things have to be so complicated when we get older? I have at last a hairdresser appointment this afternoon, but this will be no problem, as I will have assistance on the way.

And now to move on with my daily programme. I know it sounds silly to have a programme when you are 72 years old, but I somehow need it to keep going. In the hope that it will stop snowing and the sun arrives and it can only get better, I will now leave you and hope you all have a good day, or sleep well those over the pond.

The crows were too quick this morning with their bread grabbing sessions, so I only caught the sparrows hopping around. 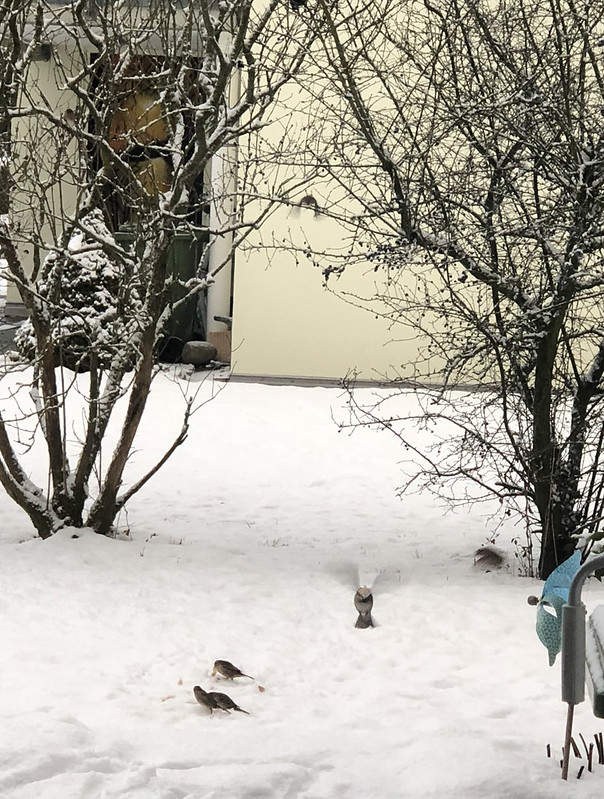