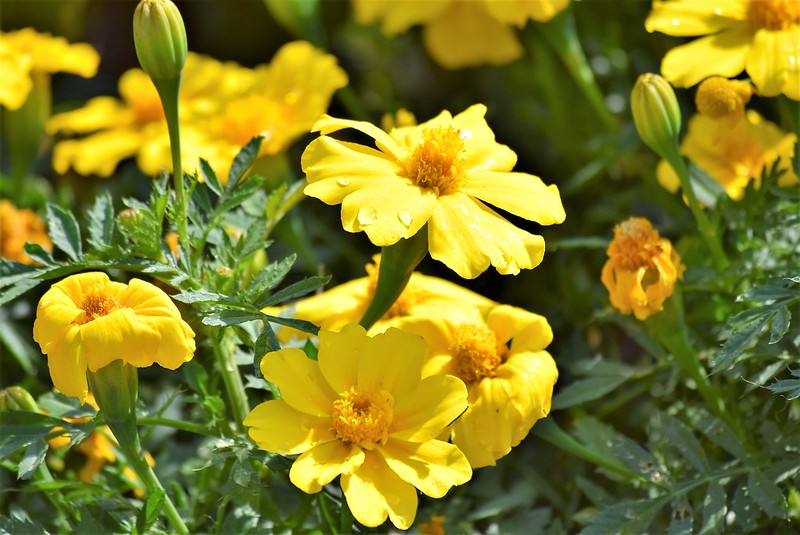 According to my Plantsnap App this would be a so-called Mexican Marigold, although why Mexican I do not know, as this one was growing in Switzerland. 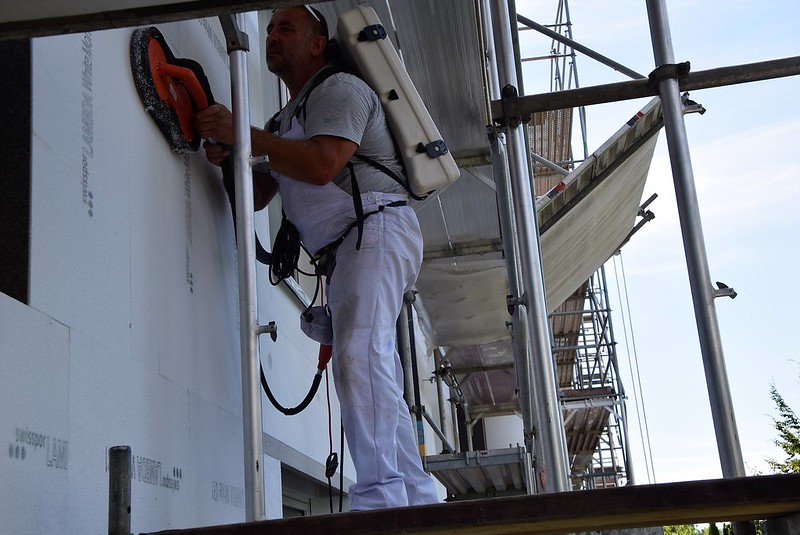 2 years ago almost, I could have given a lecture about plastering. I am not talking about the plaster on a wound, there was no wound. At least there was none until the builders moved in to create new walls where we were living.

They hammered, chisselled, scraped and even used fire and flames to remove the old surface of the walls and then they had to build it all up again: imagine the mess, the dust and the dirt. We collected all sorts of metal objects in our garden: screws nails and washers. When the plasterers moved in we knew that it was the end phase. In the meanwhile I had documented every step with the camera and knew all the details of renewing the house front.

The plasterers were dressed in white, probably so that the plaster made no visible marks on their clothes. 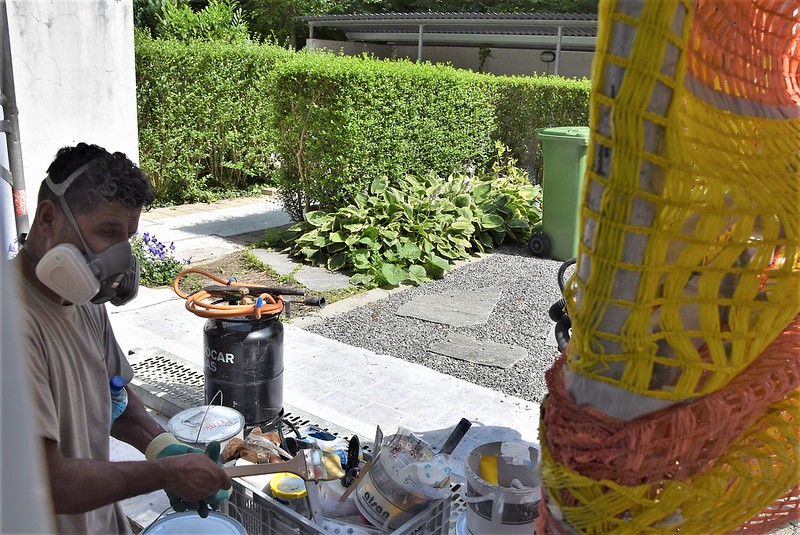 It was a messy job and we were glad for the day when they were finished. I became allergic to plaster, to plasterers and the happiest day of the year was when they departed. The job was done 20 years after the building was built. No problem, in the ext 20 years I will be 92 and who cares then. 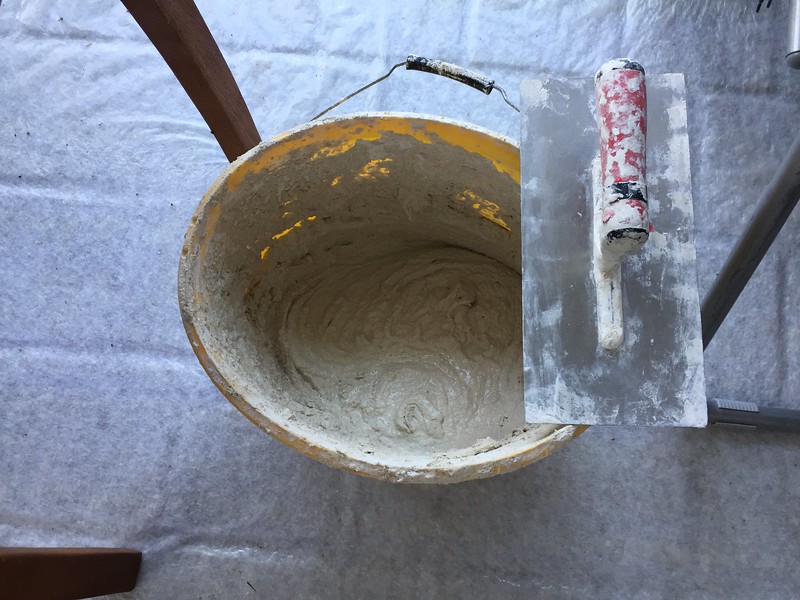 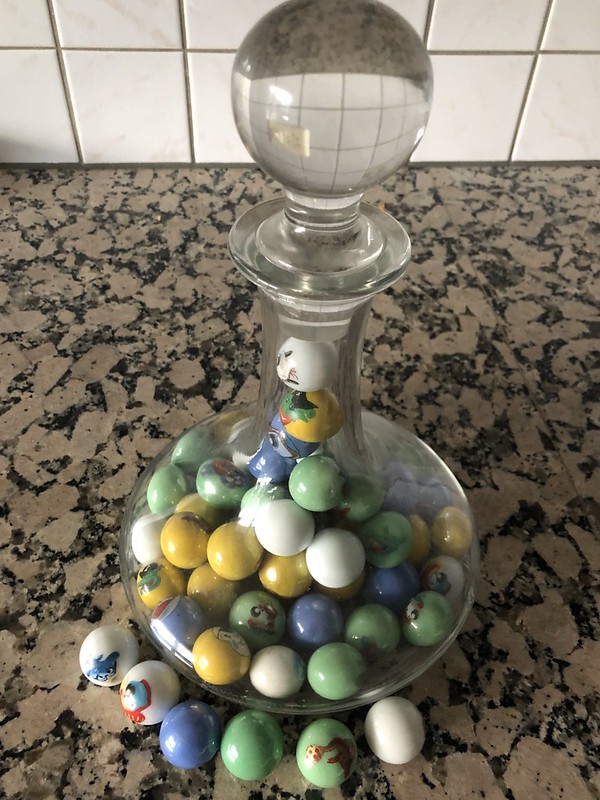 Yes, we have marbles. They were a publicity gag from the local store. for every twenty Swiss francs that you spent you got a marble. It was all in the interest of encouraging the kids to buy in this store when they were no longer kids I suppose, having a lasting impression of how good this store was for the kids.  I did not have any kids at the time, but still collected my marbles. waiting for the grandkids. One is now here, but has no interest in marbles up to now. He is more into tractors and other boy stuff.

It is not very often that I even bother with the marbles, so I noticed that it was time to apply a duster on the objects kept on the top of the television cupboard as I was removing the marbles for a photo.

My mum always used the phrase “he is off his marbles” when someone was not behaving as he should. Mum seemed to have a phrase for everything, but that was the cockney in her. 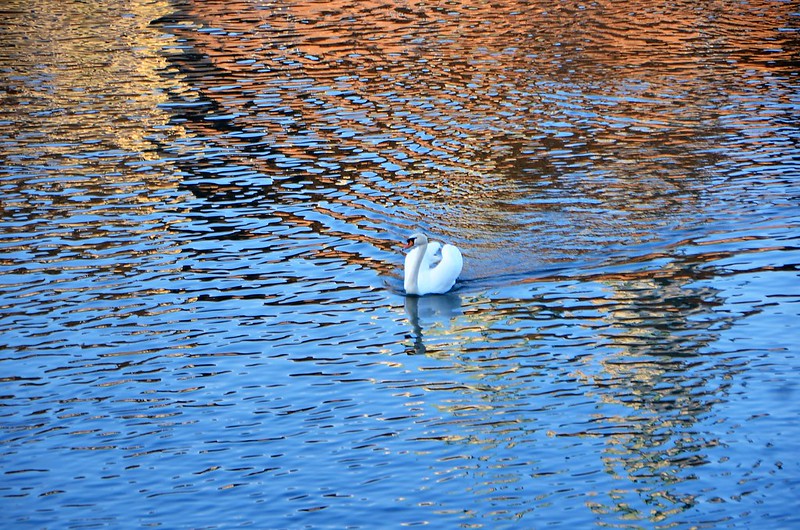 Even the local river has marbled designs now and again. 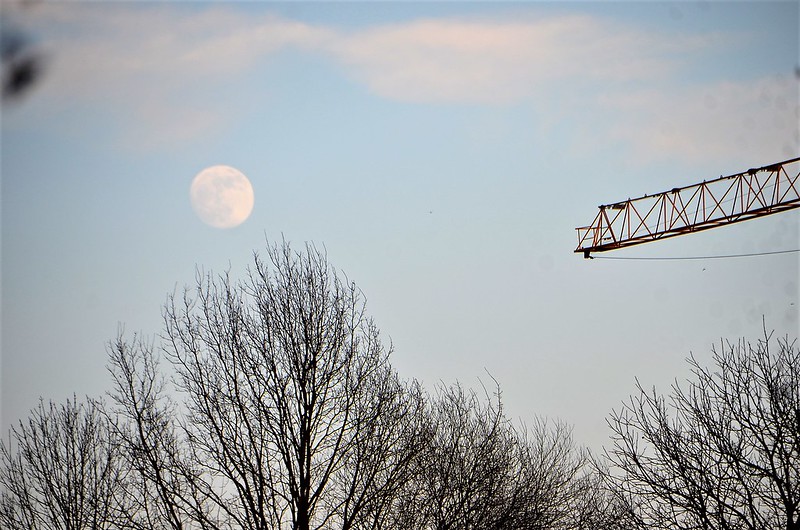 No super blood moon eclipse here this morning. There were too many clouds and to be quite honest, 5.00 a.m. is not my time of the morning, even 6.00 a.m.  I am still hugging the bed, or drifting through my iPad to see what has happened during the night on WordPress. I took this photo on Saturday early evening as I was wheeling home along the river path. I was quite astonished to see such a big moon. Although a little pale I took my photo. It was later I discovered that it was the overture to the big moon show.

It is still cloud cover here so nothing spectacular to see. 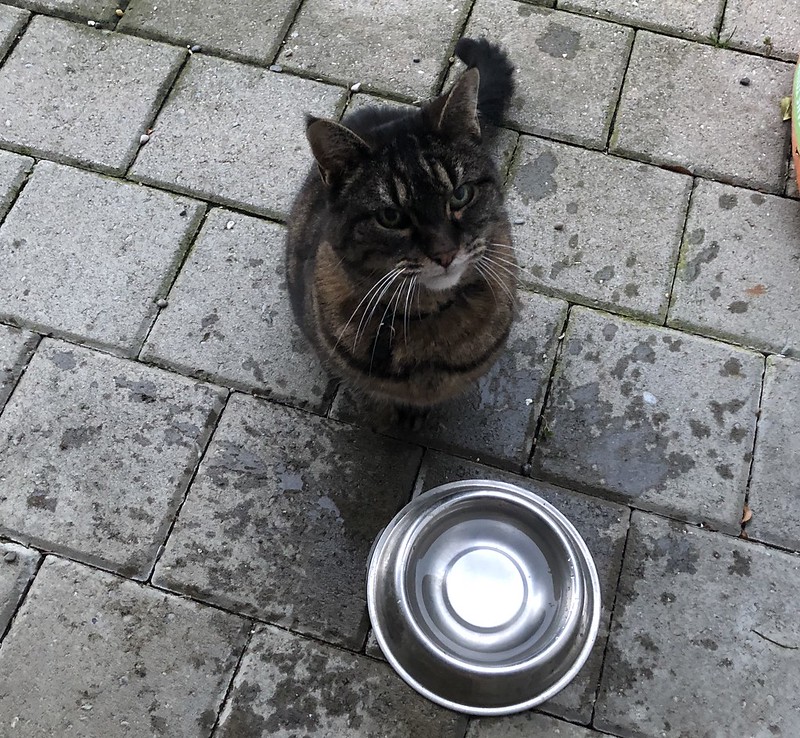 Another one of my first duties in the morning is to fill Tabby’s bowl with water outside. Of course she also has a bowl indoors but the bowl outside seems to be the big morning highlight and she waits for me to go outside in the freezing cold to complete the job. When she is finished she goes for a sleep, being exhausted from her sleep during the night, and the sparrows move in and take a drink

Yesterday was a day of rest. The sun decided not to appear in the afternoon and it was not very welcoming weather for a wheelie in my chair. I did not take one single photo, but there was nothing worth a photo. Instead I am still browsing around for a new camera. I have decided which one it will be, and have now also seen a super lens which I would like. It  costs as much as a new camera, but is a 500 zoom lens. Otherwise I have enough lens to fit a new camera as they are all Nikon. However there is no rush. I will probably wait until Spring arrives. After buying a new car, I will have to look at the financial side of it.

Money would be enough, but I am not getting younger and you never know what might lay ahead for care programmes and I notice in Switzerland that it is usually the wealthy that can afford something decent. I want to stay in my own four walls for as long as possible, after all I have a new car and want to travel for the next 10 years at least. I am continuously hearing stories of people with relations that are over 90 years of age and still travelling on four wheels (car not wheelchair). Even Prince Philip of England still drives his land rover, or did last week. He probably now needs a new one as he had a little crash with it whilst leaving the palace 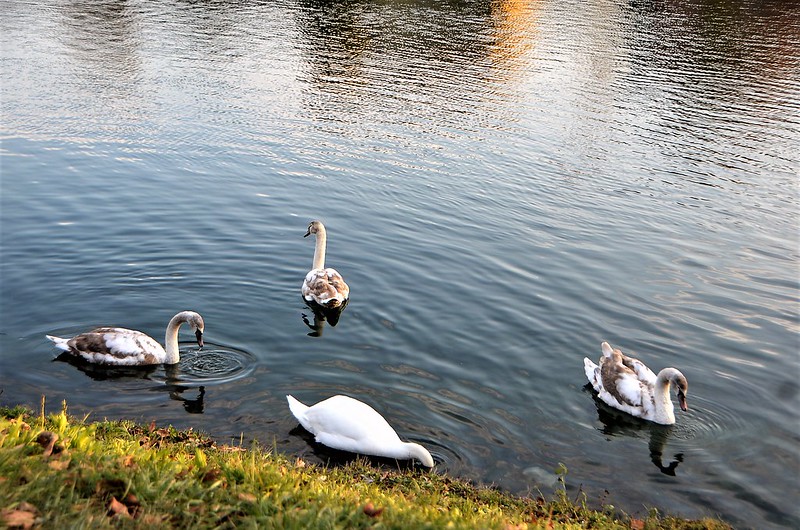 By the way I noticed that family swan were still swimming around. The little cygnets from last year are now almost real swans, but still with some brown feathers. As I was taking the photos a young lady stopped to look and asked me if I was shooting the transition from ugly duckling to beautiful swan. I also met another groups of divers as I was wheeling along. They had finished them session. I asked one of them what they actually find in the river and he said a lot of Wels Catfish. Of course you never see them unless you dive for them.

Today is again shopping at the store, and the list is made so what could possibly go wrong. I am now on my way to complete the morning programme. Take care. It is another Monday morning, the start to the week, so who knows what will happen. 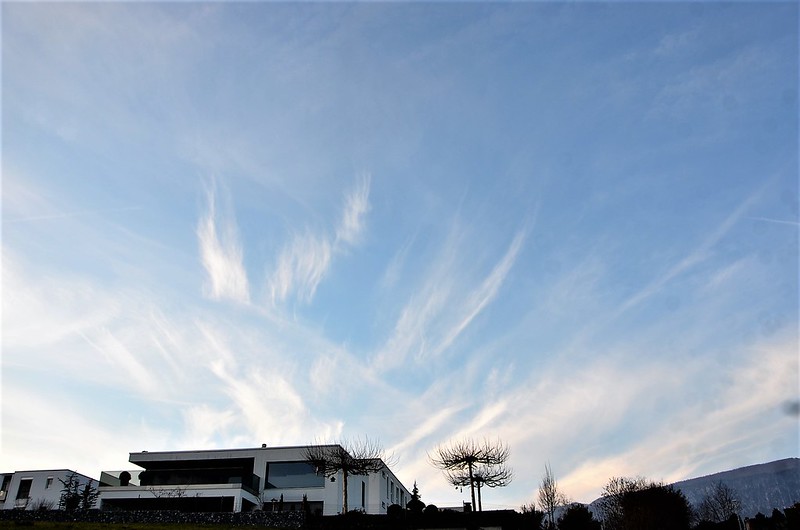