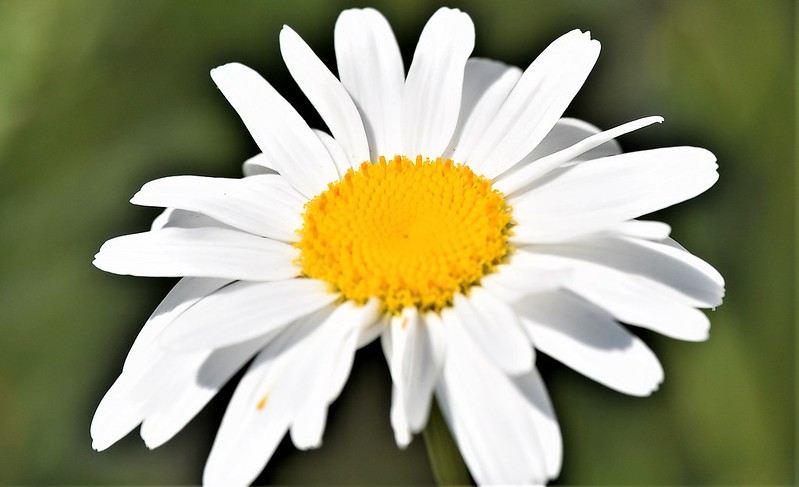 Just calling this a white daisy seems to be an insult to such a magnificent flower. I think these are the special daisies that grow quite big. I once had a group in the garden that I planted myself from seeds. I found a groups of these in the neighbour’s garden. 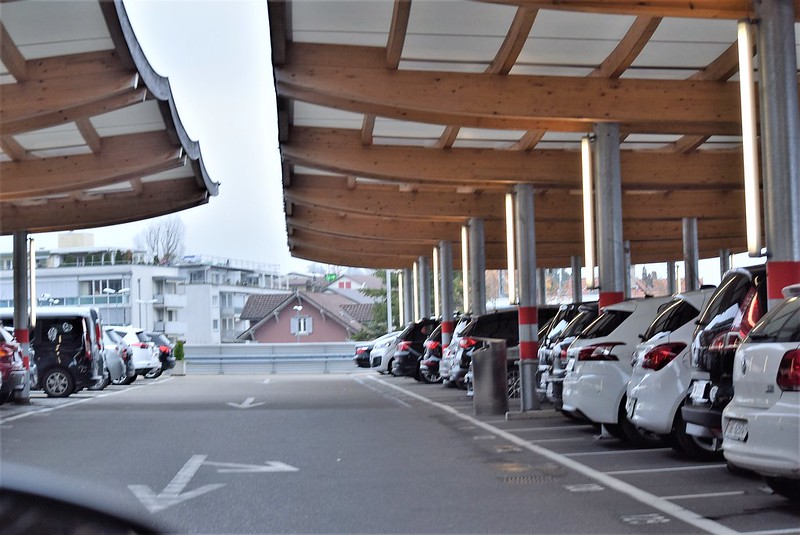 I think I am becoming a grumpy lady as I get older. I no longer have so much understanding. Is it because I am now a golden oldie and find that it is time that people show more understanding?

The same old story again. This morning I went to the local supermarket with my car. I have permission for parking spaces for the handicapped. I can no longer walk so well (although I can drive a car – it is automatic and I do not need my left foot). This time there were some empty spaces. Then a lady drove into one of the spaces, perfectly healthy, no permit in the car (yes, I had a look) and ran quickly into the store with an envelope in her hand. I watched this and thought “how ignorant” taking a space from someone that needed it.

After five minutes she came out of the store and walked quickly to her car.

“Excuse me, but these places are reserved for the handicapped.”

“I know, but I had an urgent letter to deliver in the store.”

“But there are more than 100 places empty on the other level.”

“Yes but I did not have the time.”

She was getting annoyed at my reaction and walked off shaking her head. I would not have acted this way earlier, but now I just cannot keep my big mouth shut. In the meanwhile I noticed a guy sitting in his parked car (with no permit). Suddenly a lady came out of the store with her shopping, hopped into the car and they drove off. Another one taking what does not belong to them.

Ok, I complained (again) in the store afterwards and the lady said I was right to complain, but no-one does anything. When I finished my shopping I returned to my car and spoke to a lady in a wheelchair. She said she knows the problem, it happens to her often but the store do not react. They could I suppose but do not put anyone outside to watch these parking places, and so they are mostly occupied by cars with owners that can walk normally and have no handicaps.

Yes I was annoyed. It is frustrating when no-one does anything. 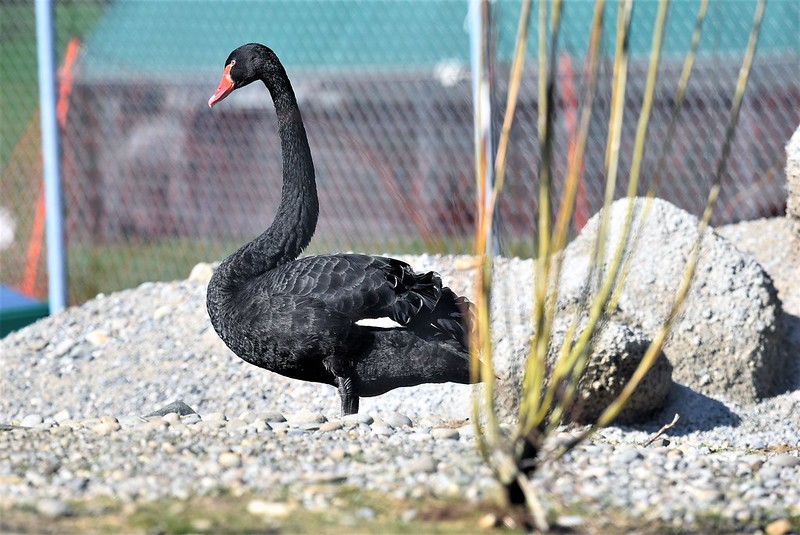 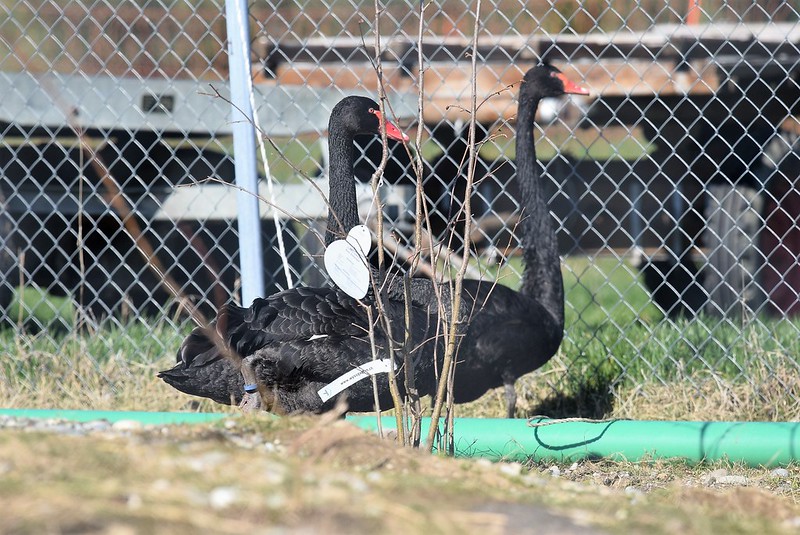 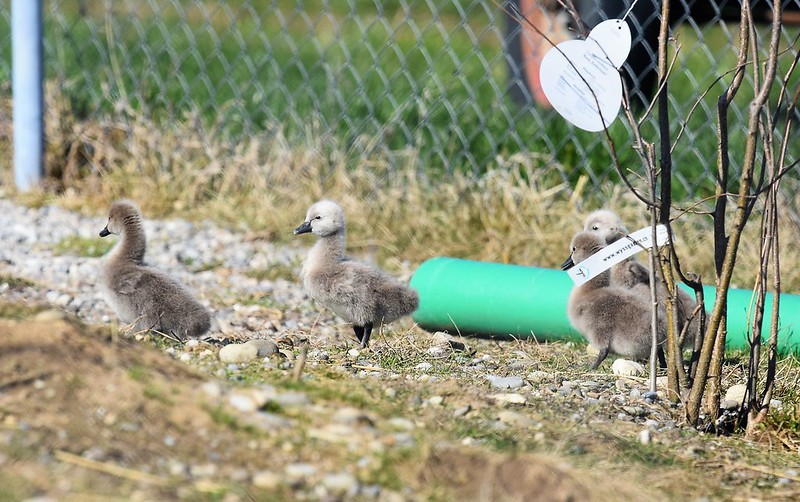 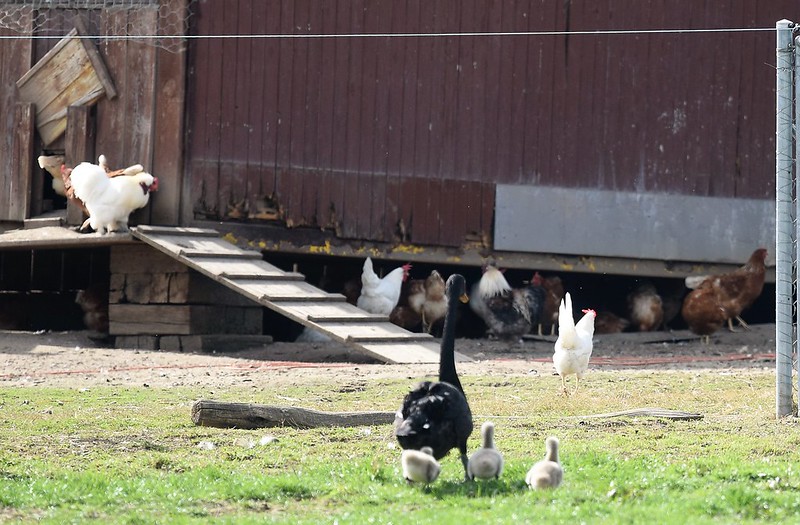 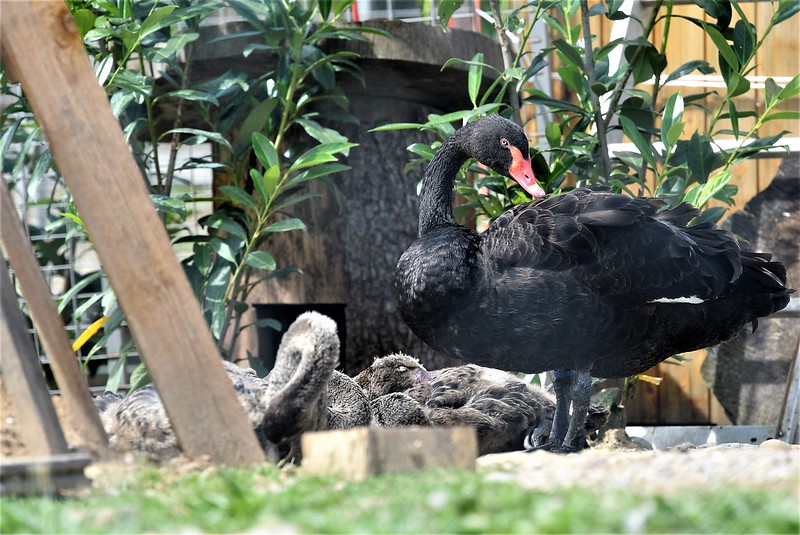 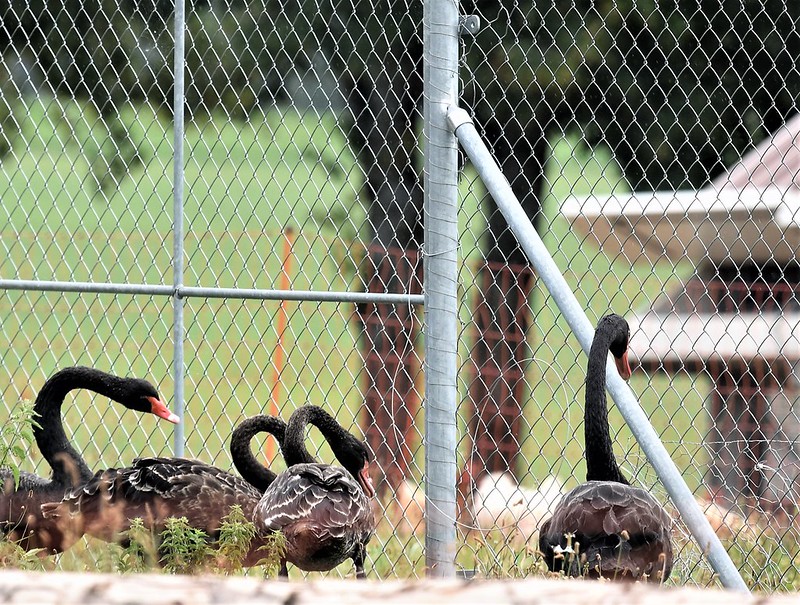 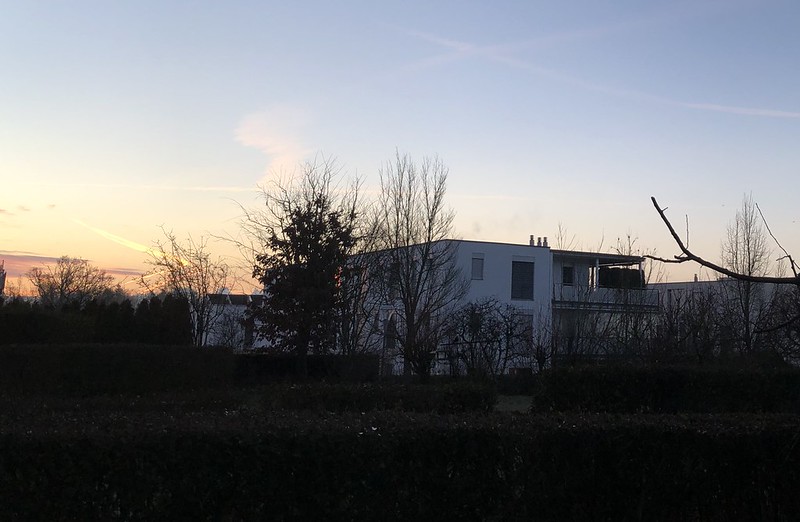 No spectacular sunrise this morning. This photo is yesterday afternoon, bordering on a sunset. This morning, although a clear enough sky, it is -3° C and even I froze when I put out some fresh water for Tabby outside and spread some bread for the birds. 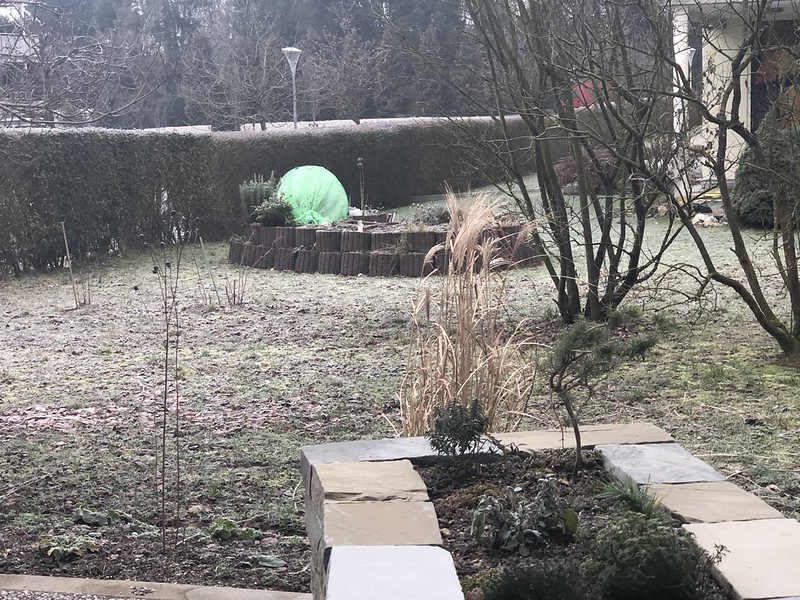 At first I thought we had some snow coverage on the ground, but this was ground frost and quite a lot. I usually just hop out in my nightdress in the morning to see to the birds but this morning it was a quicker hop than usual as I was freezing.

I really had to have a chuckle at this video yesterday. As some may know there is an international WEF Forum meeting is Davos, Switzerland at the moment. OK, Mr. Trump and his delegation decided not to go, probably he had an important golf match somewhere. Also Mr. Macron of France stayed at home, but our Swiss soldiers were there to guard, in case anything might happen. There is a lot of snow in this part of Switzerland and to play safe avalanches are forced to make sure the snow falls where it should. Unfortunately there was a little mishap with the planning and this avalanche did not stop when it should. I really had to laugh at the reaction of the soldiers when they noticed the avalanche was coming their way. The speech is Swiss German but many words are international and I do not think that you will have problems with translating. 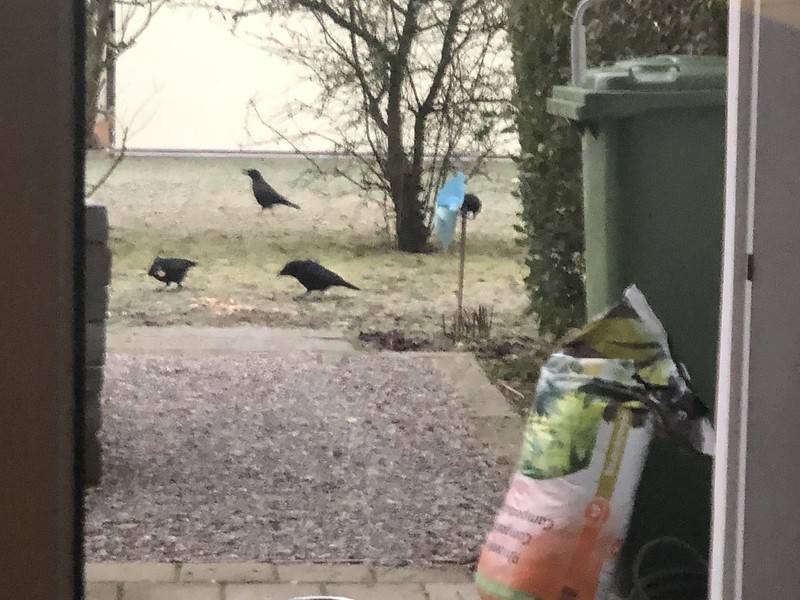 The crows are back for their breakfast again this morning. There seem to be more and more every day. We also get a few magpies but they do not stay long enough for a photo.

Yesterday the guy arrived to fix my wheelchair. He did the necessary to make sure I could go for a wheelie, but a small screw seems to have broken and they had no replacement in the workshop so he will be back when he has organised it. He also fixed my walker, as the right sided brake was not working. I am now ready to go places again, although this morning I am out with the car on a shopping trip and usually too tired to go anywhere in the afternoon. I will see how it goes.

Yesterday I at last cleaned my windows in the kitchen and living room. I usually do it every two weeks, but this time it was almost a month because of the snow and rain showers. I was knocked out when I finished but am glad it is done.  During the day we are now having a bit of sun and I do not like my windows to be dirty.

And now to do the usual with a shower and cleaning up a bit. Then I am off. The shopping list is made, so what could possibly go wrong. Enjoy the day with whatever you are doing and look after your computers. They also have to be spoilt now and again and keep going like the mallard duck on the nearby river. 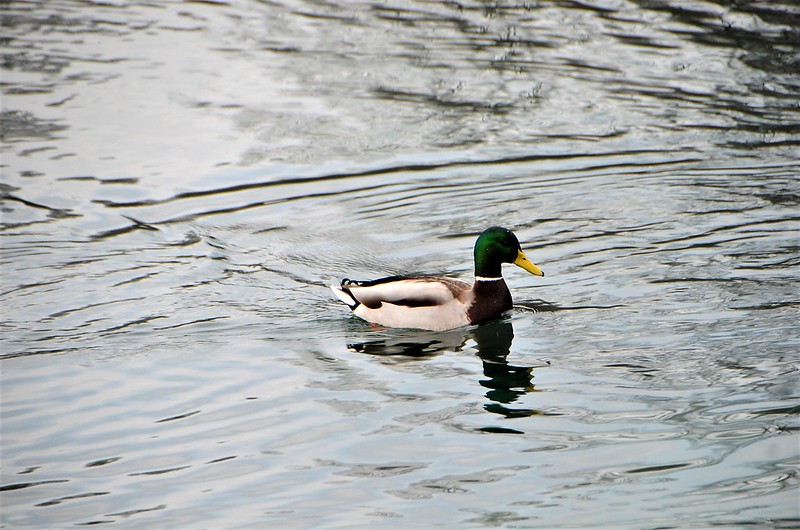