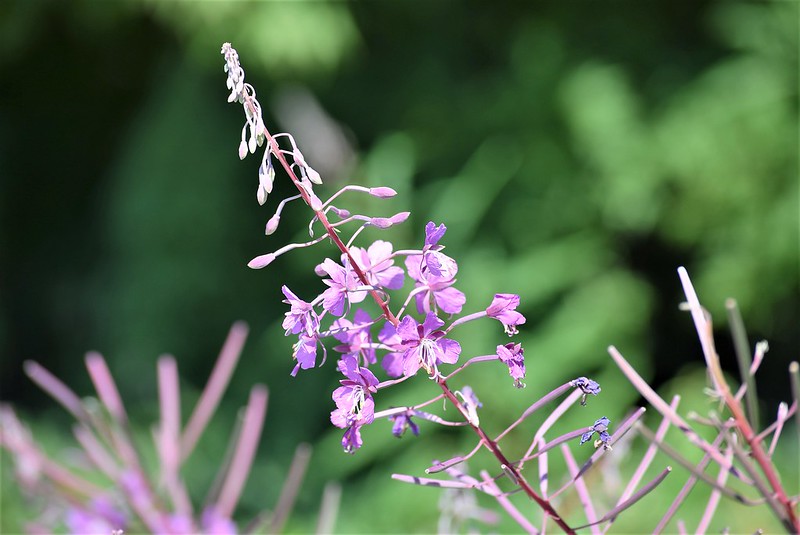 This flower has accompanied me almost all my life and I never knew what it was. It sprouts up everywhere. I remember when I was a kid in London, our playgrounds were the bombed sites of the houses after World War II and these flowers were everywhere. They are quite tall and seem to like to spread. I now applied my Plantsnap app and this is what it told me, a fireweed. 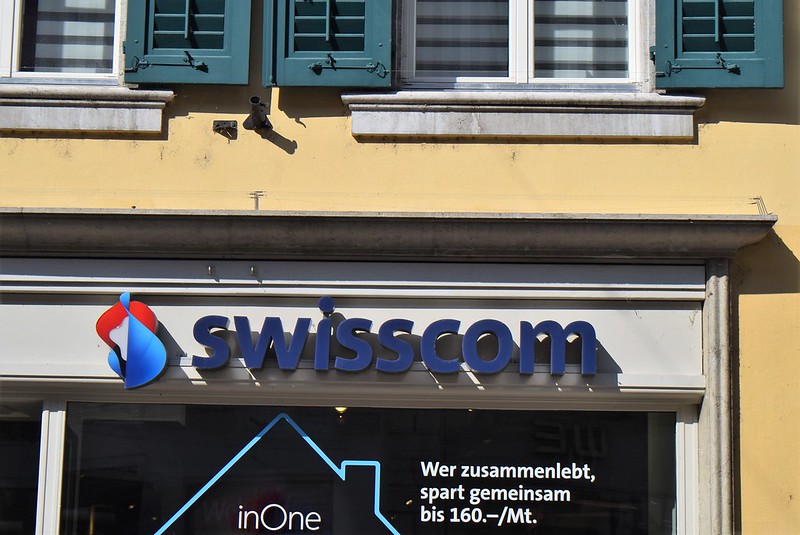 Our local telephone Shop with a blue name in a yellow building. 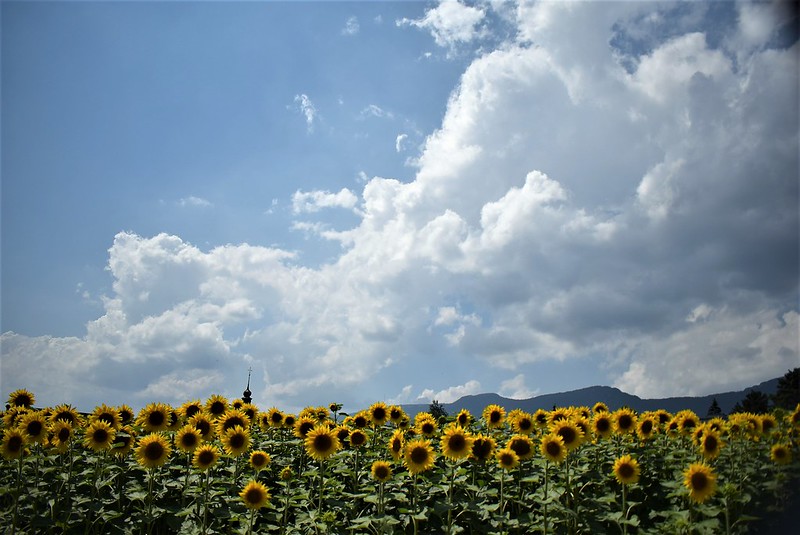 A sunflower field planted in Summer in our area for its oil. 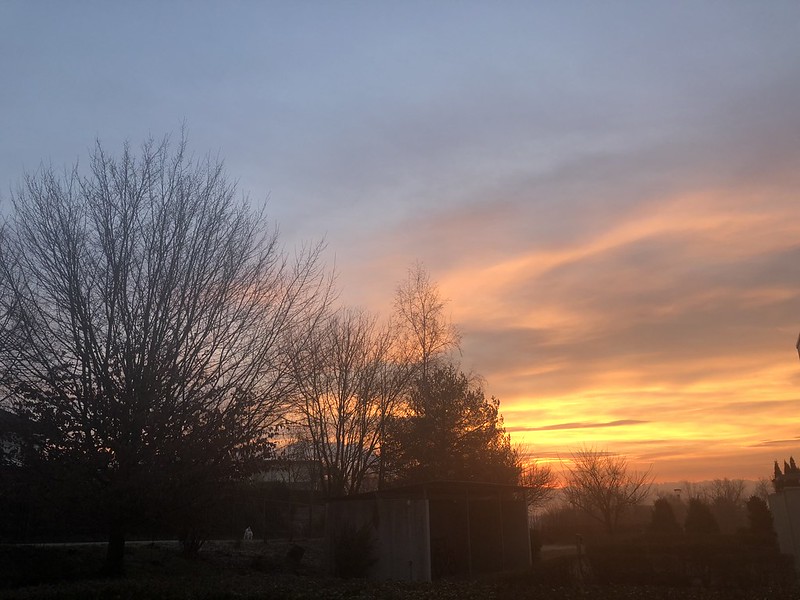 Sunrise from my home 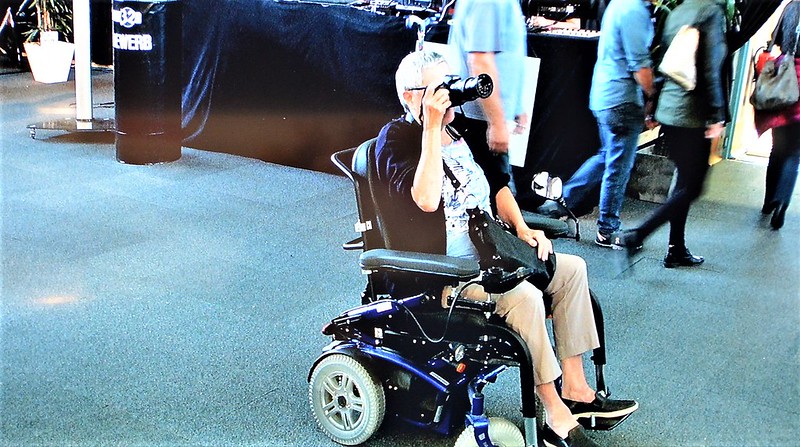 The avid photographer, that’s me. Wherever I go I have a bag containing my Nikon with a lens and an extra zoom lens in my bag. You never know if there is a distant object you want to take a photo of. Wheelchair? my normal long distance mobility. For shorter distances I have my walker or a supermarket trolley to lean on when shopping. I also have my mobile iPhone X for instant photos. By the way this photo is not a selfie but taken on a TV screen at the local trade exhibition as I was wheeling past.

I must admit, that since I now go shopping on my own, as for Mr. Swiss it is a bit of a stress to come with me, I no longer take the Nikon with me as I can no longer take photos from the car as I am driving. In the earlier days, when we were both more mobile, Mr. Swiss would drive and I would be snapping away on the passenger seat. An unwanted advantage of a wheelchair is you can pack everything into the bag and do not have to carry it. Of course in my past days of mobility I would be carrying the camera myself.

Perhaps it is just as well that I now drive the car. I have taken all the photos I can on the road to the store.

There is always something interesting somewhere for a photo, no matter what. My family only took photos on holiday, otherwise the camera was put away. Then the digital camera arrived. Mr. Swiss had one immediately, and when he bought his second digi camera, he gave me the first one. Then it happened. I was snapping everywhere. He would take one or two pictures a week, and I was already into double figures. I now have so many I have lost count. I have long taken over Mr. Swiss in the world of photography and have a camera collection.

And there is always something for a picture. One of my favourite subjects is the sky, clouds are always different. There are possibilities everywhere. 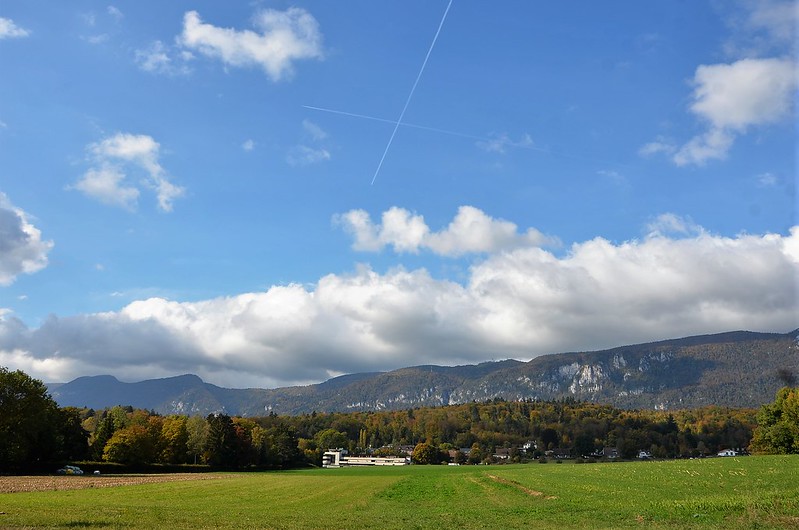 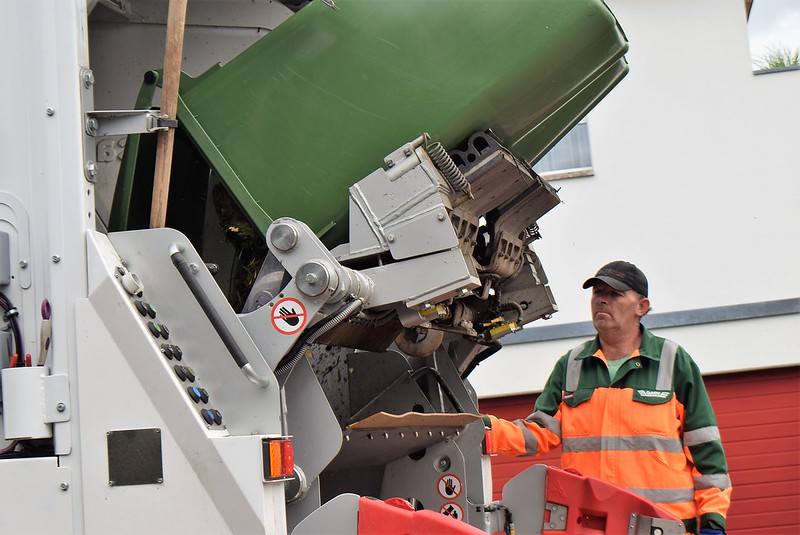 What about the garbage collection. The men who remove our unwanted rubbish once a week. They are have to deal with the  rubbish, the stuff we throw away and often it is not so pleasant.

Today it is all fully automated, at least in Switzerland. It is not like in the earlier days where we had a large metal bin in London and left it on the street. The dustmen (as we called them then) would lift the bins and empty them in the truck, all done be hand of course. Afterwards you were left with a street smelling of disinfecting powder which would be sprinkled into the bins. to keep it all under control. I nevere saw a rat sniffing around afterwards.

Today it is all done hygienically. The rubbish is packed in various sized plastic bags bought in the supermarket. They must have the official badge on them and are the most expensive plastic bags I have ever seen. This is because their price includes the extra fee to pay to the local authorities for their removal. Of course you cannot just throw everything in the plastic bag.

We have our separate collctions for garden refuse and also metal. 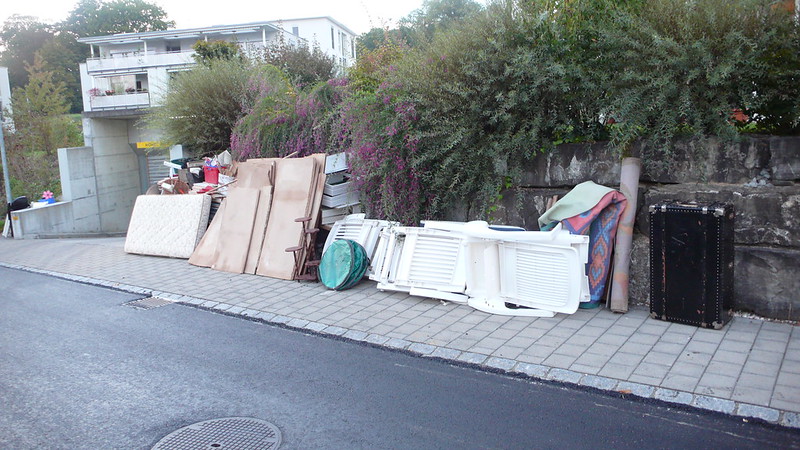 And there is the twice a year collection for the big stuff that does not fit into the bin, but please nothing metallic otherwise they leave it. If you are lucky various families might do a tour of the area on this day with a truck or even their car, to see if there is anything useful being thrown away. What some people find unwanted, might be just what you were looking for.

And of course the glass jars and bottles and metal cans also have their own place, but you have to bring these yourself. Every village has its special depot.

So where do the rubbish collecting men bring it all? 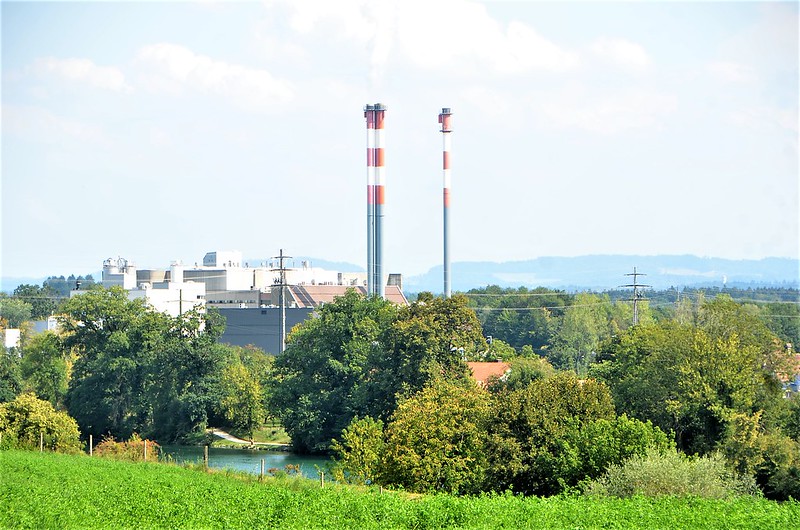 Even that is organised and in our part of the country we have the depot in a near village. They burn it all, unless it is something dangerous to the surroundings that might explode which is disposed of in special places. 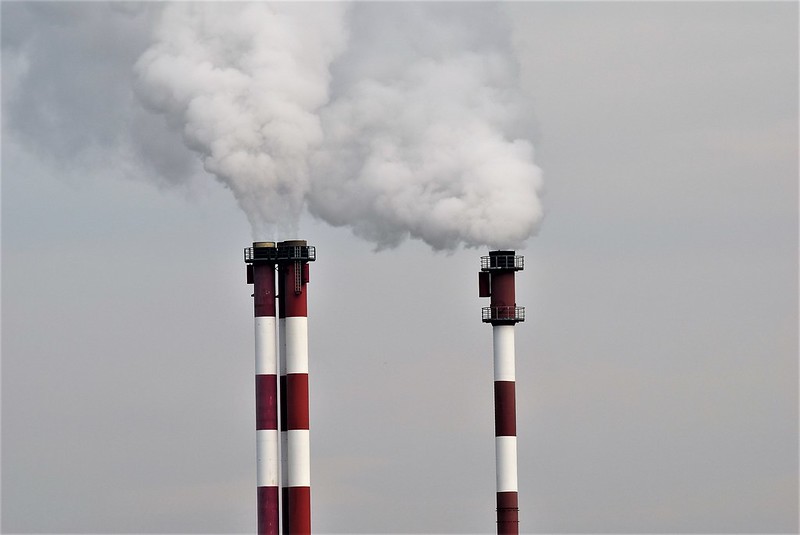 Smoke pours from the chimneys day and night, but rest assured. This is Switzerland and we only have clean smoke. If you have something special and bulky to dispose of, you can bring it yourself. It is weighed as you enter and afterwards tipped into the pit of no return. As you leave you pay by weight. Even rubbish has its price.

Me? I no longer collect anything, just take photos of it all. 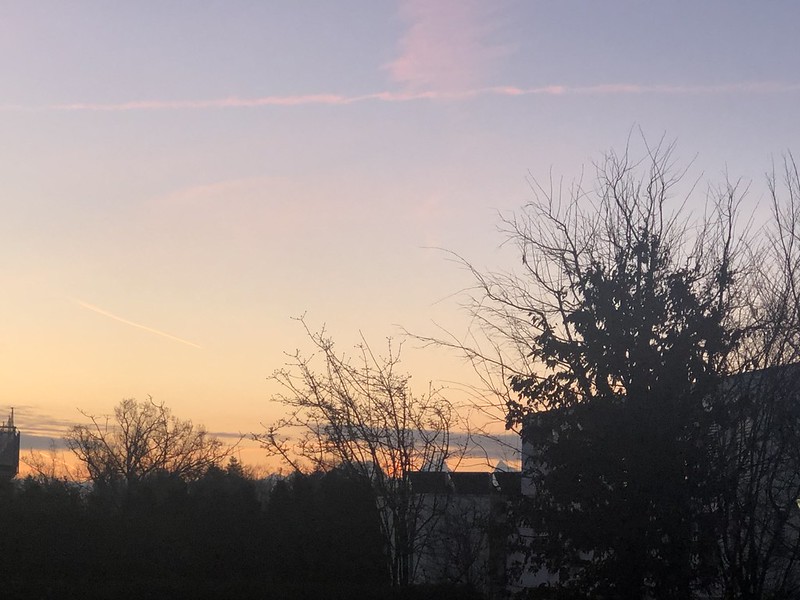 The time is now approaching for the impressive sunrises. I caught this one this morning and if you look carefully you can see two mountain tops of the alps on the right before the building. The local castle sits on a hill, and if I would make my way now  I could probably take some wonderful photos. of the alp panaorama-  Unfortunately I am not inspired at minus C temperatures to go out with the camera, but prefer to stay in my warm kitchen.

So what shall we do today. It will be a stay at home day. My wheelchair is out of action until the guy calls this afternoon and hopefully can repair it. Yesterday I made an excursion to the store to catch up on some shopping. I was a bit disappointed that all the parking spaces for the handicapped were occupied and I asked myself if it was a special day, I did not check who had a permit or not as I had to drive on and luckily found a space further down in the gardening department which was the lower floor in the store and meant I had to walk to the lift afterwards to get to the top floor. However I survived although it is very tiring for me with the ups and downs,

I think I might clean a few windows today if I have enough surplus energy. It seems the snow days are now gone at last. Otherwise it will just be a normal morning. 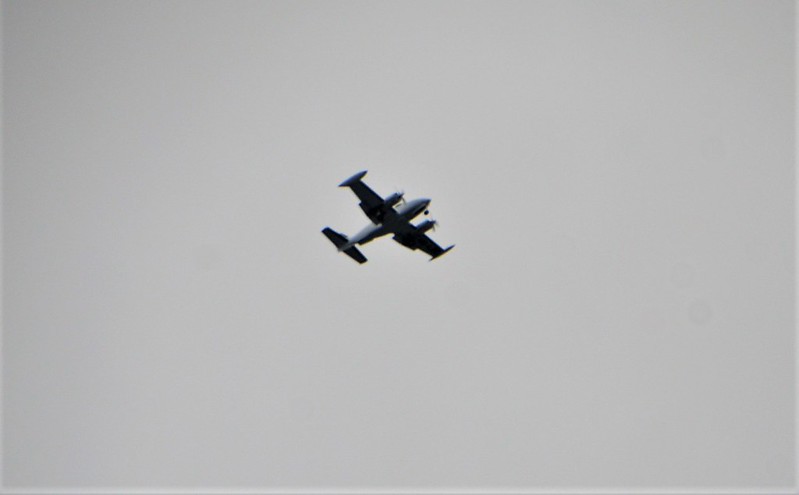 There was a little excitement when I heard a plane flying over. I am not an expert, but it seems to be one of those planes with propellers, at least it made enough noise.

And that’s that. What a boring life I lead, but now to get some excitement into my daily life with the vacuum cleaner and mop. Have a good day everyone, keep fit and see you around. 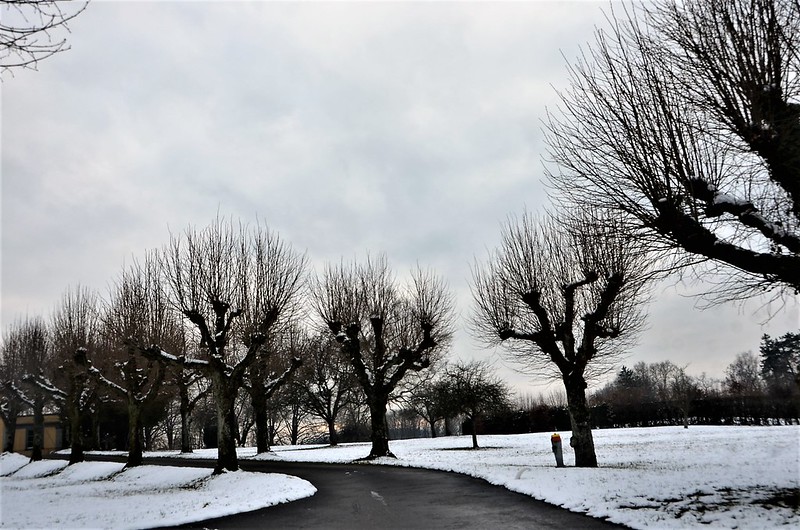