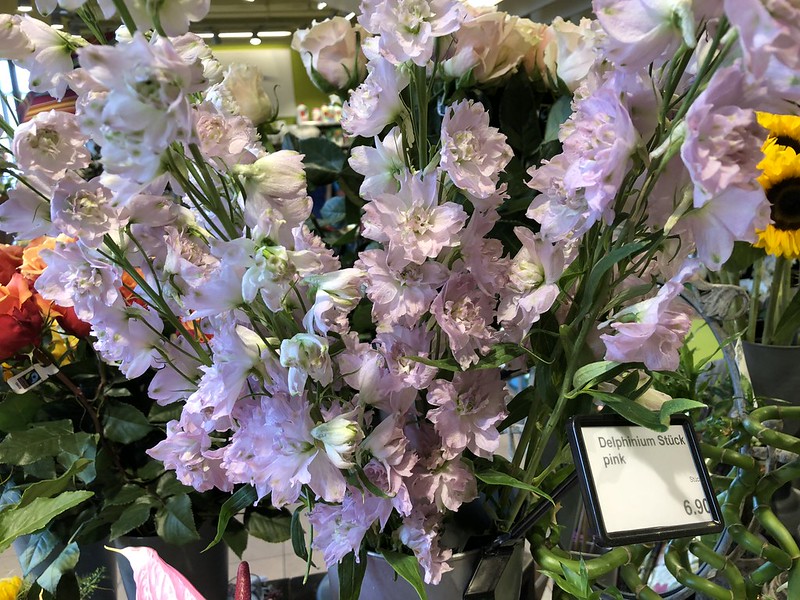 Delphiniums in pink for a change. 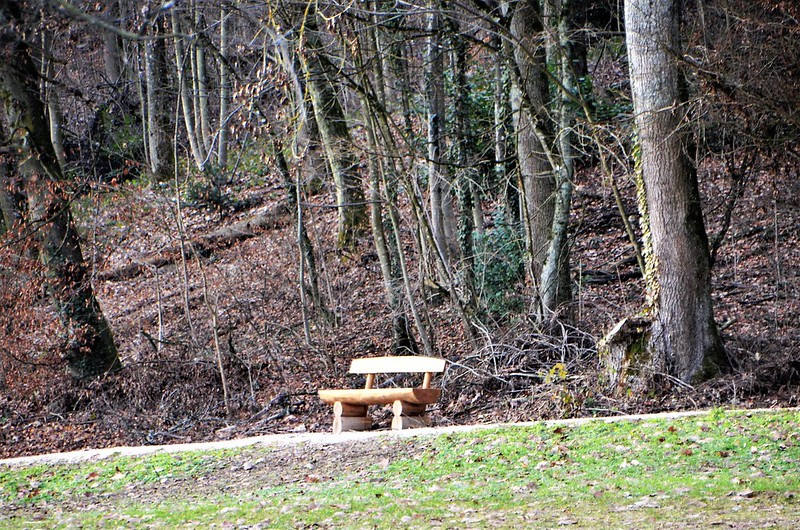 In Switzerland you find seats everywhere, even in the remotest of places. 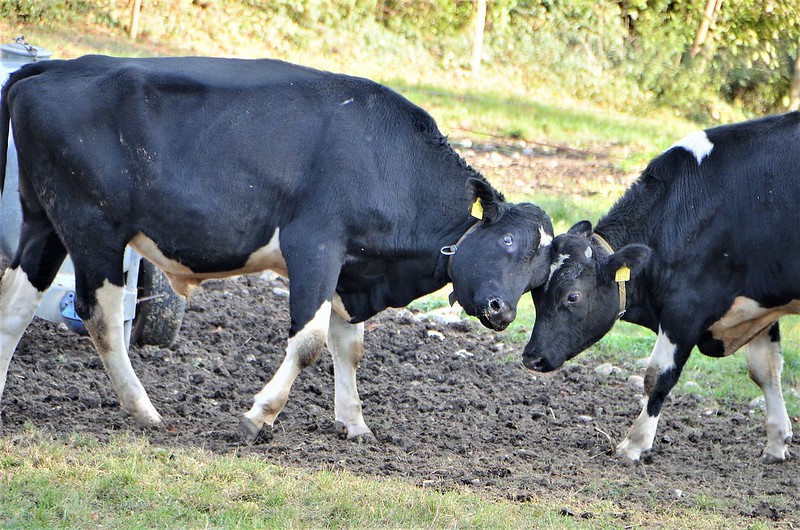 With cows you can never be too sure. Are they having a disagreement or just getting to know each other. Perhaps it is one of the reasons why most Swiss cows have no horns, to reduce the damage. 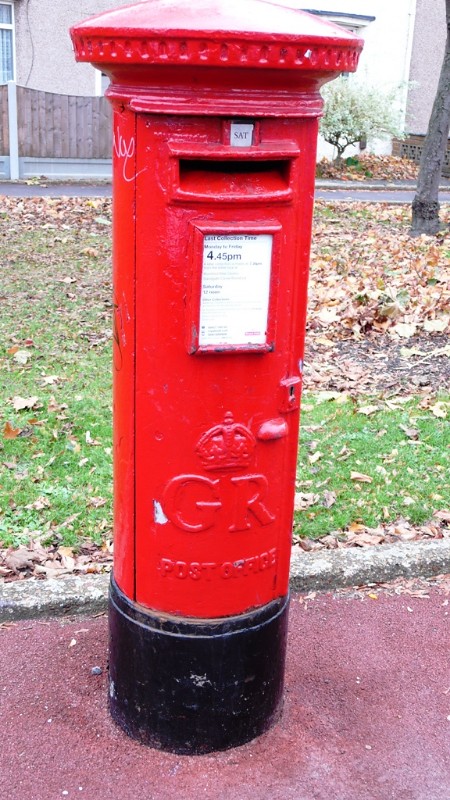 I found this photo in my archives, taken in the area where my late dad lived. It is a good old British letter box. Note the Letters “G R” symbolising King George VI, father of the current Queen Elisabeth.  Probably cost too much to replace it with a new box: anyhow a typical landmark of the Brits and I am not even sure if they still exist.

Why do we have to have letter boxes? Do people still write letters today. I was writing regularly home to my parents when I moved to Switzerland in the 1960’s and my office job was based on letter writing. It was the business communication method. If you had the written word with a signature, it was genuine.  I earned my money by writing letters, usually dictated by the clerk and written in shorthand. Afterwards typed on the typewriter. This is now a thing of the past, almost and I cannot remember the last time when I actually wrote a letter to anyone.

Digital communication has taken over. E-mail, fax, messenger systems, call it what you want, but a handwritten letter is a thing of the past. I used to collect stamps when I was younger, taken from the old letters. Do we still need stamps? Only today I filled out a form (by computer of course) for my No. 1 son’s holiday reservation. He is autist and goes with a special group every year. I had to print out the form for my and his signature. It seems the digital signature is not yet so widely accepted.

I remember when my mum was still alive and she told me with regret that she had disposed of all the letters she still had that she wrote to my dad during the war when he was serving in various countries. I remember those letters, bundled together in a special case. I never really read them, but she showed me a couple with heavy black blocks over certain passages which had been made unreadable. That was the wartime censoring when my dad might have written where he was exactly and what he was doing. My mum met dad when he was a soldier just once and then they wrote to each other for five years whilst he was serving in the army in the war. Eventually he came home on a Friday and married on the next day to my mum. Just imagine, that was a love story. They had not seen each other for five years and my mum visited dad’s parents on her own whilst he was away, knowing that they might/would marry when he returned.

It was the letters that kept them in contact and she eventually destroyed them with heavy heart, not wanting them to be read when she or dad were no longer. Perhaps it was better that way. I do not think I would have ever read them, far too personal.

The romantic letters between Mr. Swiss and I are typed exchanges of mails, and today we carry our phones with us and can even see the person speaking. Yes I have seen a lot of changes in my years, it is called progress I believe: but a good old fashioned written word?? Ok, my handwriting was never so good. 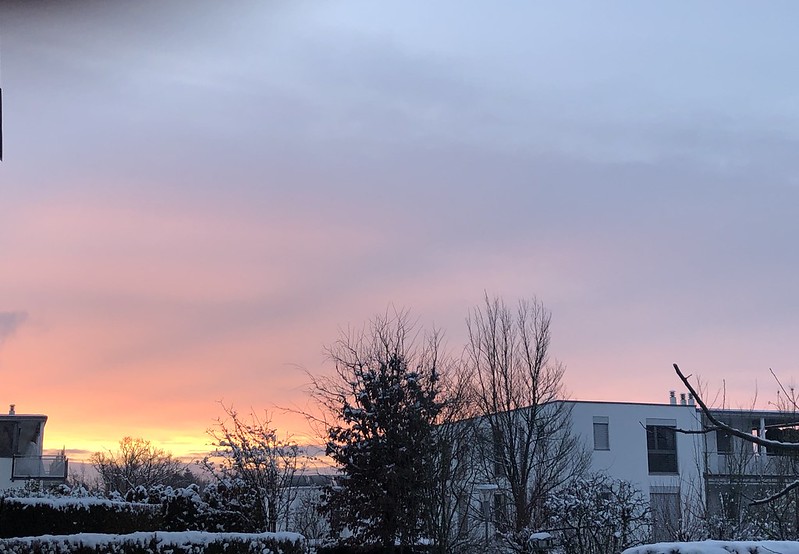 One thing I must say for the cold frosty, snowy weather is that it delivers good sunrise photos. This photo is the morning sunrise from my garden, although just a little later than usual for me as I was hugging the bed a little longer.

Yesterday was not so romantic as it decided to snow all day. I was keeping an eye on the development of the snowflakes. At first they were fine and I was hoping for some rain, but then they grew and got bigger. Mr. Swiss had decided that he needed a new iPhone and I said OK, but in the afternoon when it does not snow, but it snowed. It was eventually bigger flakes, but temperatures were over 0° (just 1 or 2°C) so I decided to take the risk, I mean everyone drives on snow. I saw the cars on the near road were having no trouble. I then had a look at todays weather forcast with minus temperatures and decided at least there would be no icy surfaces.

Eventually I made off with Mr. Swiss in the car to the store. He was on a quest for a new phone and I decided to combine it with the week-end shopping.

I did my shopping and Mr. Swiss dealt with his telephone. He really thought his mobile had given up the ghost. It was a relatively new one and the guy in the shop fixed it in a couple of minutes and it is now working perfectly, so no new telephone. We eventually arrived home, tired both of us, and more or less happy. I thought I would not have to go shopping today, but of course I forgot a couple of things. On the other hand the weather is cold yes, but there is no fresh snow and the roads are normal. I only have a few things to get, so no problem. 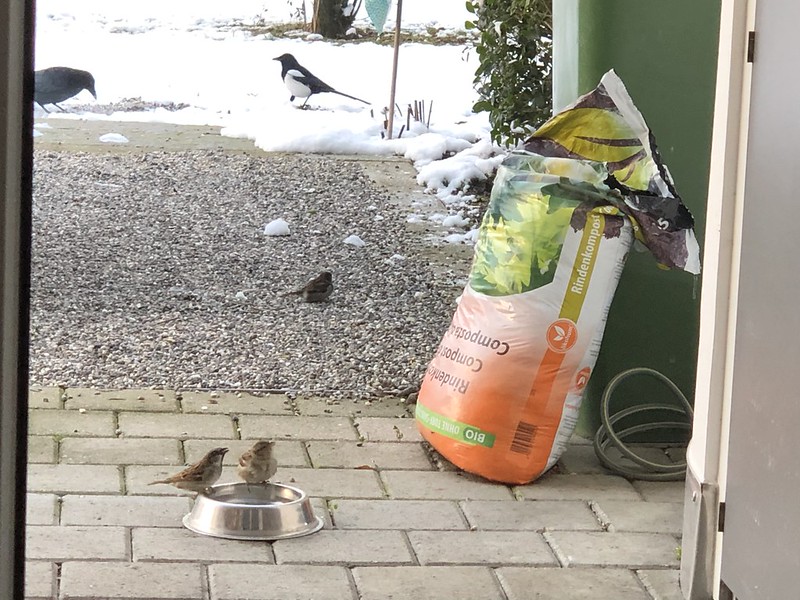 In the meanwhile the birds are gathering for their morning feed. The sparrow having a drink and generally pecking around and the crow and the magpie discovering the bread I put out in the morning. Not a very good shot, although I was surprised how much detail I captured as it was only with my mobile phone through the window.

I would like to go places today again, as I am really stuck at home with only snow photos in my camera, but it depends on how the day develops and I have a mountain of ironing to do as well. In he meanwhile the sun has appeared with a blue sky and now I must move on.

Keep safe, and look forward to the week-end. It can only get better. 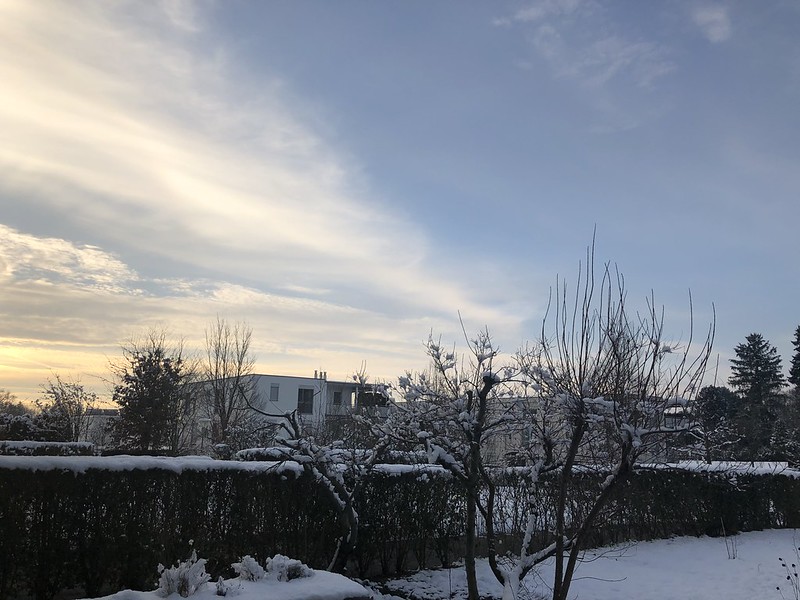