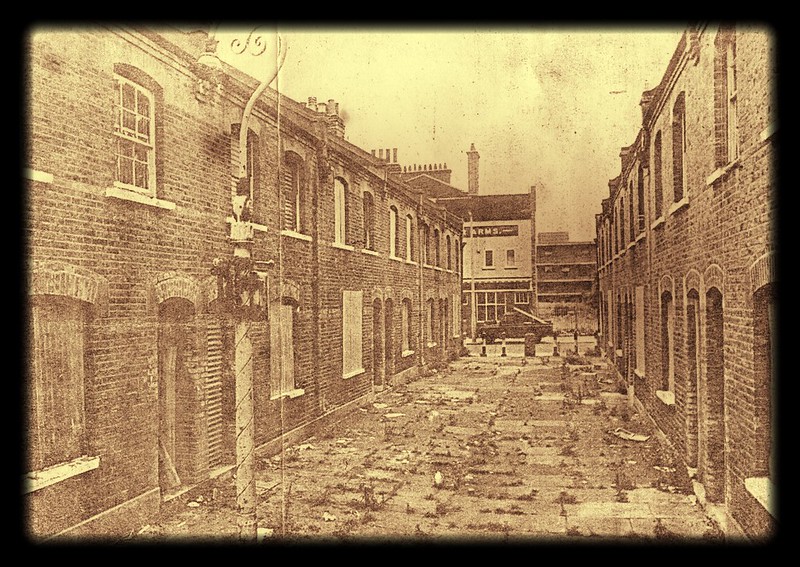 One of the streets of the old East End, Bethnal Green, London. Actually the street where I grew up but eventually it was left to itself and demolished.

Why this street? It resembled most of the streets built in the 19th century to house the working class: toilet outside in the garden and no hot water. It is also a typical street where Jack the Ripper, the local killer, killed 5 women. His victims were prostitutes and they were left mutilated on the street with the exception of one who was killed in her rooms. It all happened in the area known as Whitechapel. I would walk through the streets on my way to school. Most of the original showplaces no longer existed, being demolished and new buildings replacing them. Even some of the streets had disappeared.

Jack the Ripper was never caught. There were suspicions, even including a member of the royal family. Some thought it might be a member of the medical profession. He was a serial killer, one of the worst, but his name has gone down in the history of London. The nickname of “Ripper” explaining the nature of the murders.

Did this man fell any remorse? Definitely not. Why did the killings stop? Perhaps he had left whilst the going was good, perhaps he might have died, no-one knows.

I grew up with the legend of Jack The Ripper, the murders being committed in my area of London and who he was remains a mystery to this day.

2 thoughts on “FOWC with Fandango: Remorse”