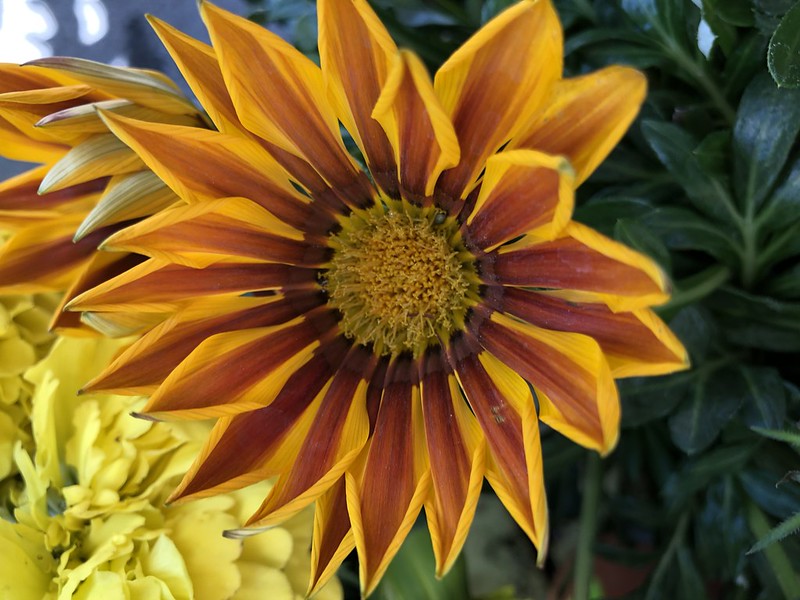 Another flower from last June. I think I took this photo in the store. 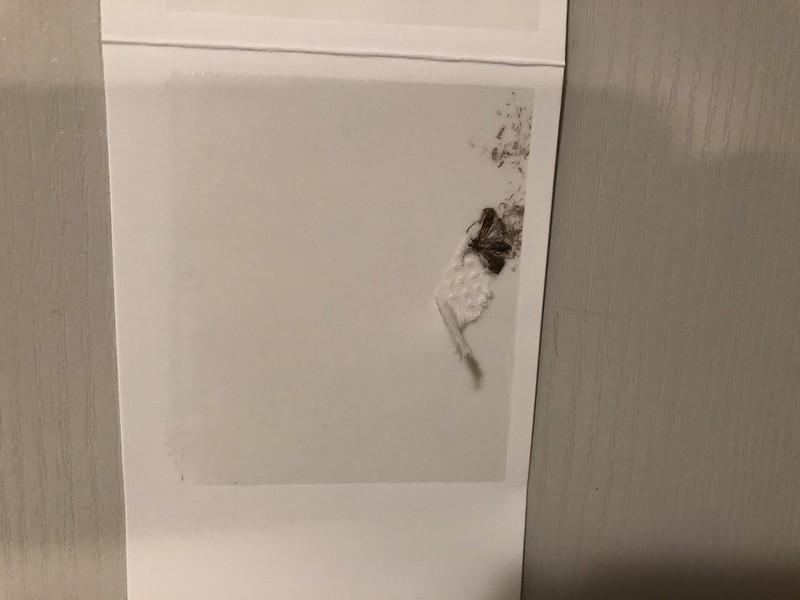 It does not happen very often, but I am sure I am not alone with this problem. It is not even something you like to admit. Who wants to make it public that you have food moths in your kitchen. It is a constant battle where you eventually ask who are the underdogs, the humans or the moths.

I live in the country and like to have my windows open. Suddenly a food moth flies into the kitchen and slips into the cupboard. It climbs into a packet of food (it does not even have to be open for the human eye). If it is a female in the family way, then you have the damage and they are not easy to eliminate and you might not even notice it until the babies (disgusting little objects) turn into moths like mum and dad.

What can you do? Of course you can kill them if you can catch them, but that is not the solution, because their offspring might be somewhere undiscovered. The only remedy (in our country) is to put sticky paper on the inside door of the cupboard. It is impregnated with female hormones, or something like that, and the male flies onto the paper and sticks and dies a sticky death. It looks a bit messy on the photo, but that is because I decided to put it out of its struggling misery on the paper. This makes sure that no families will be established and in a couple of weeks the moth plague might disappears if you are lucky.

Now we have Winter, a warmer winter than usual and I saw a moth flying around, very small, but I have trained eyes. It is unusual to have moths in Winter, but I had my suspicions. Today I stuck a sticky paper on the door and after checking I found a dying moth on the paper, stuck for life. I cleaned out the cupboard, removed anything suspicious that was open, and found nothing more. Ok, it is not an invasion, but I hate these insects. I am sure I am now on the winning side, but I often ask who is the underdog in this situation because I am on constant watch for food moths and I know they will return again.

It is really not something I like to admit, but slowly I am sure that this is an attack that most of us have had to suffer. Does anyone have any advice. It is all part of modern life and they are always ready to attack. You have to be very very careful with what you have in your food cupboard. 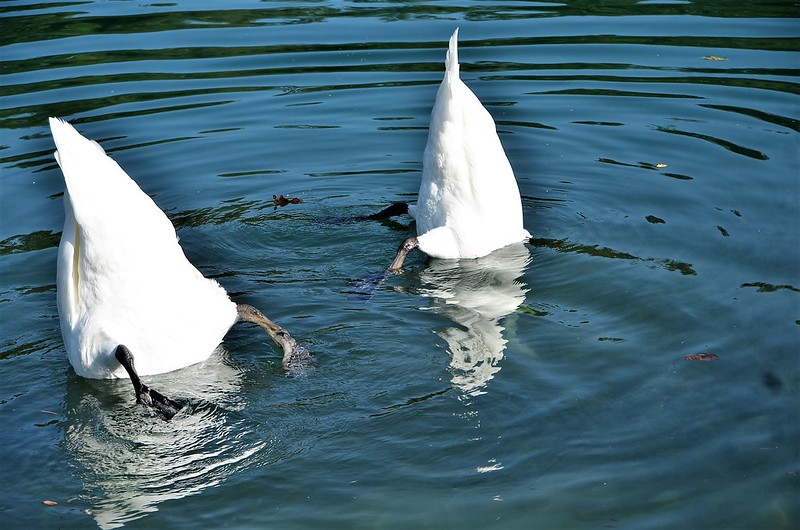 Swans appear in pairs on our river. No matter what the time of the year, they float around together and often synchronise their movements, although there two decided to see what was available in food on the bed of the river.

I read that their partnership remains for years, breeding families annually. 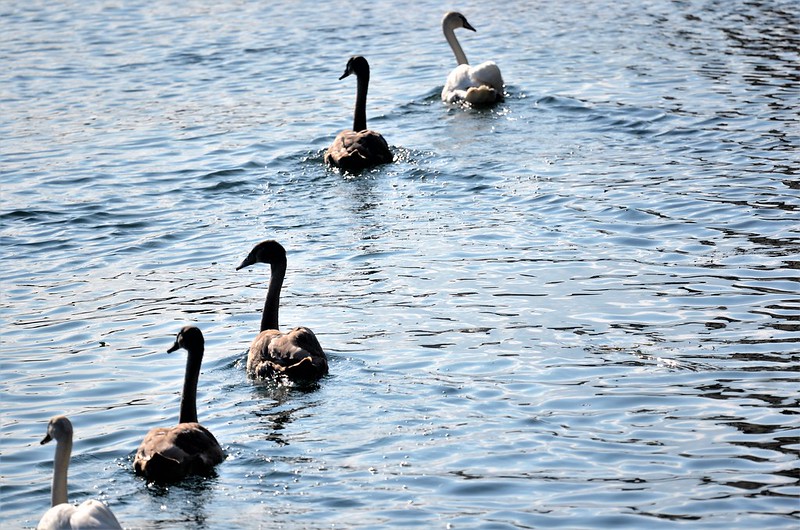 No matter how big the cygnets are, they stay with mum and dad for quite a while, at least the first year of their life, until the ugly ducklings became beautiful swans and they stay on our river. Often you find them swimming with dad or mum at the front and the partner at the back. The River Aare is a long river reaching from the lower Aare glacier in the Bernese Highlands of Switzerland and eventually flowing into the Rhine near Koblenz in Switzerland, so they have plenty of space to swim along.

Mum and dad stay with their babies until they are ready for a life of their own. The partnership of swans is a long term association and if one dies the other mourns its passing and often remains alone for the remainder of its life. 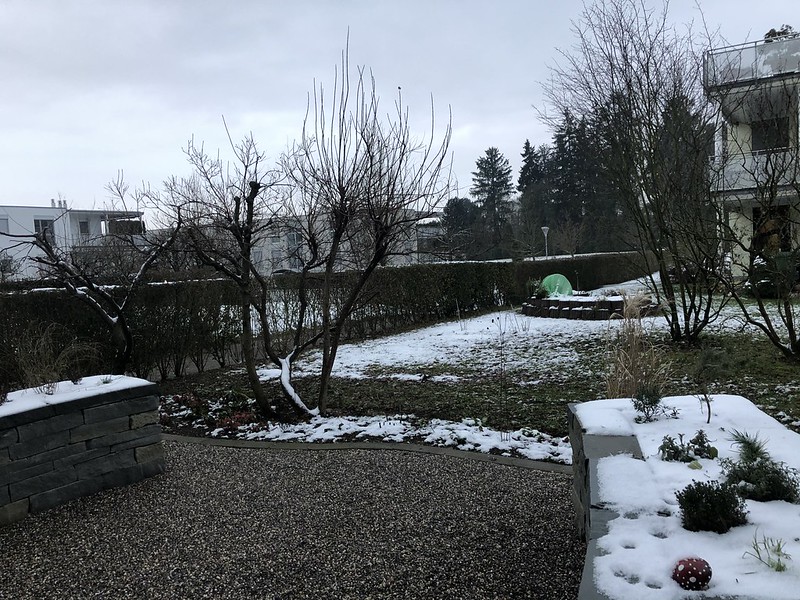 Yesterday we got snow, Switzerland got snow. It began in the morning and continued until the early afternoon.  As I was not going places I did not mind so much, was only hoping that the spook would disappear by Monday when I go shopping. My new expriences with regular car drives is fun, but not in snow, especially fresh snow that has not yet been cleared away by the road machines. However, I was lucky. It stopped yesterday and is not returning in our part of Switzerland. East Switzerland got most of it and Zürich airport had many delayed flights. Most of it has now thawed away.

No. 2 son and his family live in east Switzerland, Shaffhausen area, and planned to visit yesterday. They arrive for lunch with no great problem. My daughter-in-law is one of those people with driving in the blood so the snow did not bother her so much. It was nice to have them visit and seeing my grandson only every 1-2 months, I notice the difference each time he arrives.

It looks like my wheelies in my chair will be few and far between if there is snow and ice on the streets. 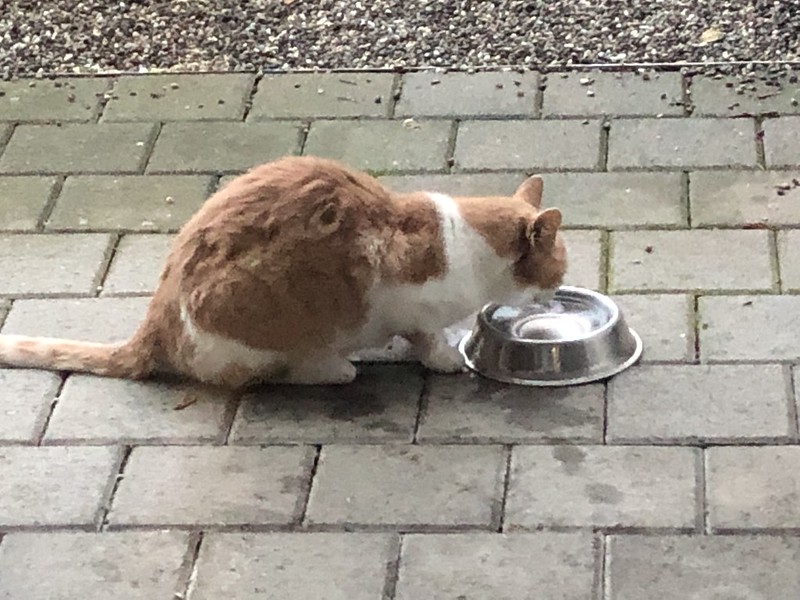 One of the first things I do in the morning is renew the bowl of water outside, mainly for my cat Tabby and the sparrows also enjoy a drink. However, we have a new visitor lately. The neighbour’s cat Roschti goes on a morning patrol and passes through my garden. He has discovered the bowl of water and now stops by to sample what is on offer. Roschti originally belonged to a neighbour that moved away, but the cat stayed and was taken over by another neighbour. She does not like my cat, and my cat does not like Roschti, so they get on like two cats on fire. Now and again they have a staring match, perhaps a short paw swipe, but nothing too serious. Sometimes they just sit and look at each other, depends on the daily mood. 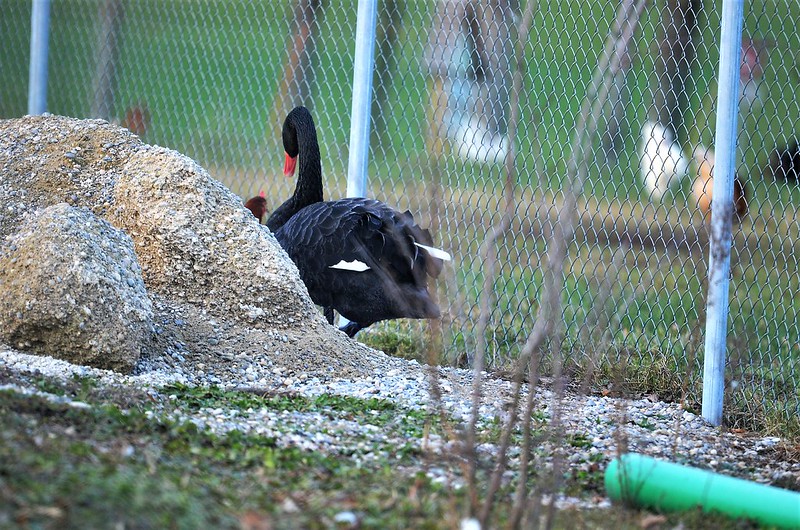 On my last visit to the local farm I noticed that the black swan was still there. Her chicks are now probably fully grown and have gone further. 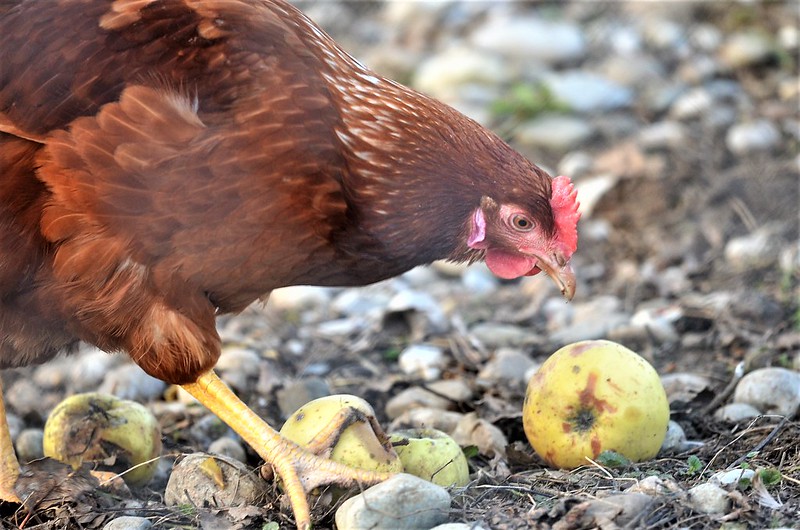 One of the chickens had also discovered an apple for lunch. There is an apple tree in the grounds and the farmer just leaves the apples on the tree. The animals are quite pleased about that when they fall.

And now to move on, but it is Sunday so I take my time. The first job is put the roast in the oven and let it cook until lunch time. Then generally tidy up with a shower and hope that  the snow stays away and the day develops well. It even looks like a little sunshine

Have a good Sunday and enjoy. I leave you with one of my sunset photos from Friday. It was really a special day for a sunset show. 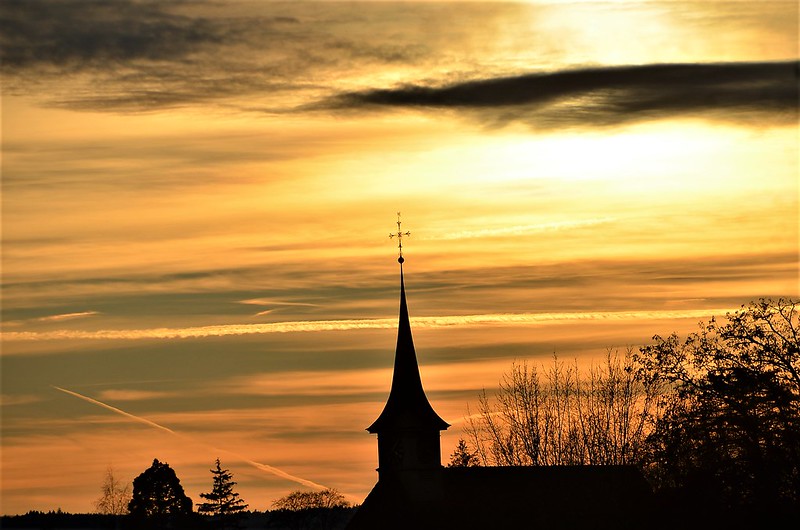