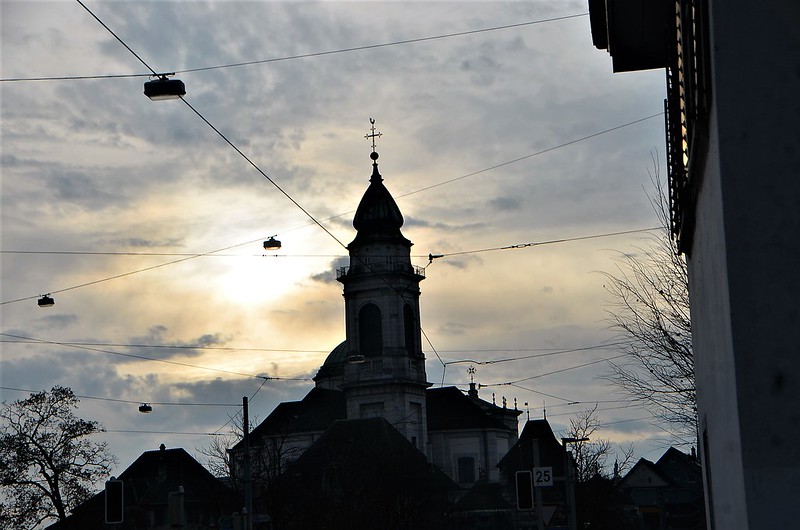 They let me out again yesterday afternoon. For once it was not raining and so I made the most of it when I could. Wheeling around in a chair can be a little complicated when raindrops are continuously falling on your head. Our cathedral had a nice background when I reached Solothurn. As I approached the town wall there was a gentleman standing their with a Nikon camera in his hand. As I also had my Nikon camera ready for action we naturally got into a conversation. He immediately saw that I had a Nikon D700, whereas he had a Nikon D750 which is the better camera of course, although I have had mine since 10 years at least, and his is a later model.  He was not a local native, but an Italian, so we conversed a bit in all languages. His wife joined us. The were a very nice couple and were touring around Switzerland as his son lives in Geneva. He said he is actually more into video, but his wife prefers photos. Yes, she also had a camera, although not a DSLR.

So I wheeled onto the square to the Christmas market. It is only being held on 5th and 6th December. 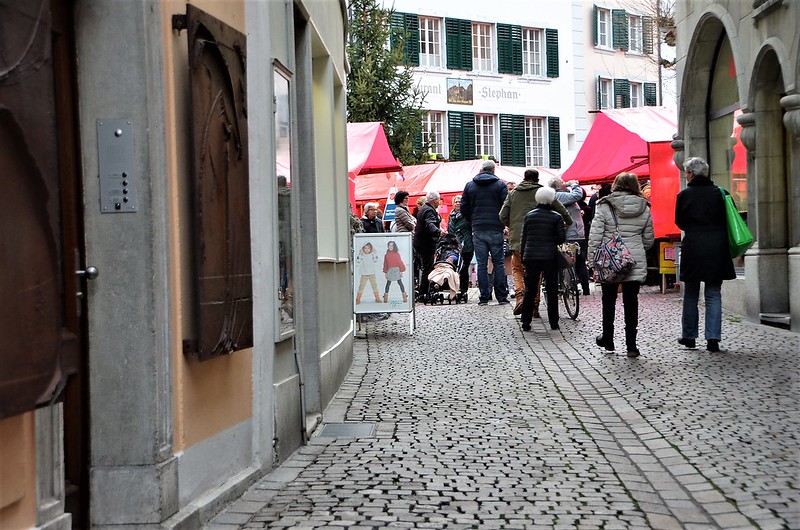 As I wheeled over the cobblestones through the approach alley, I could already see the red stalls. I also noticed that there were quite a lot of people with the same idea.

There were many market stands with their various Christmas themed articles. 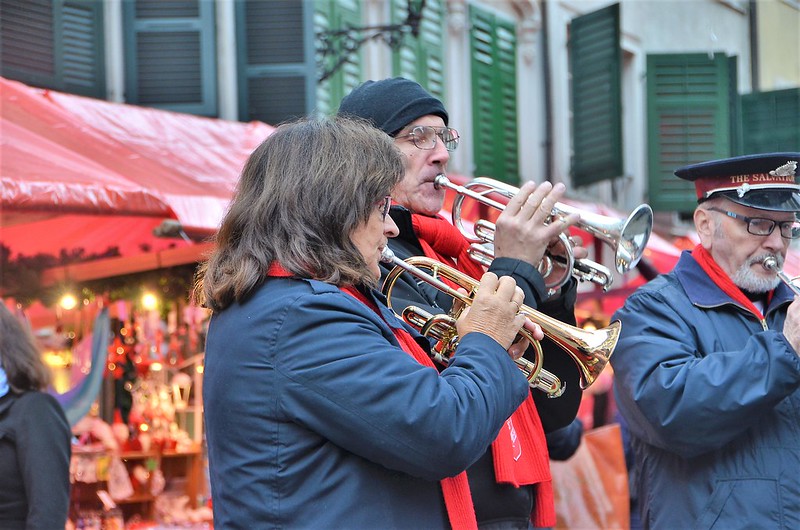 And then I heard music. 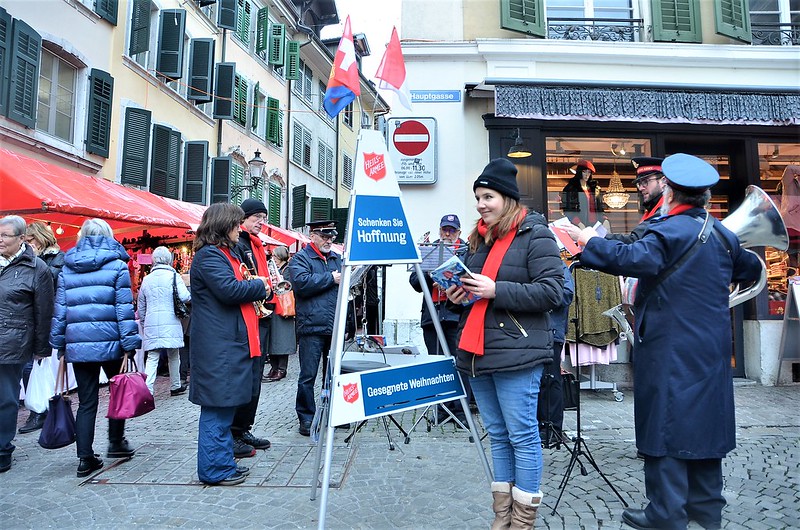 The Salvation Army were also there playing some Christmas songs. I love those guys and it brought me back to my childhood days in London at Christmas. I took a few photos, and I must admit I even had some water in my eyes. Their music is plain and simple but so many memories came flooding back.

Taking photos in my wheelchair was not so easy on this market. 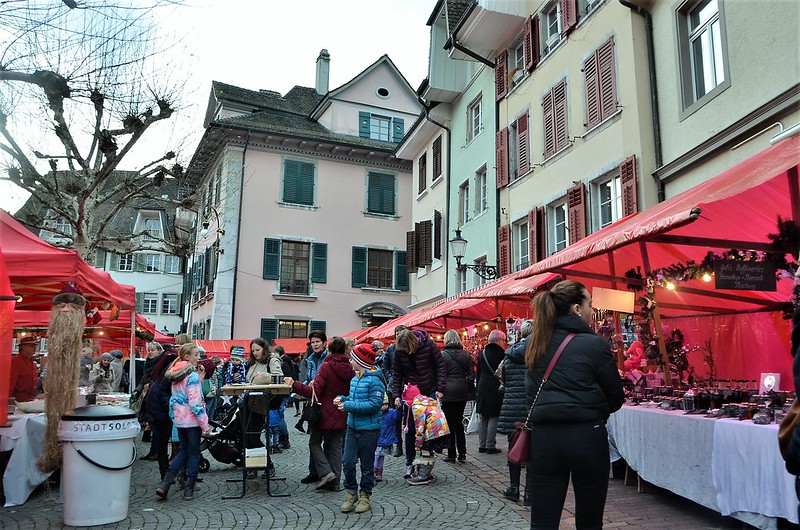 There were so many people and naturally most of them with their children, so I had to weave my way between prams and people. Although there are clear spaces on the photos, I had to pick the places for photos where there was enough room. Of course Santa and his partner (German name Schmutzli) were also expected. There was a clock hanging on the space where he would be, but I was too early and the kids with their parents were already queuing, so I decided to give it a miss.

I eventually decided that this Christmas market was not really my thing. I was only there for a few photos.

I decided to wheel my way home along the road passing our village senior residents home with its illuminated Christmas tree. 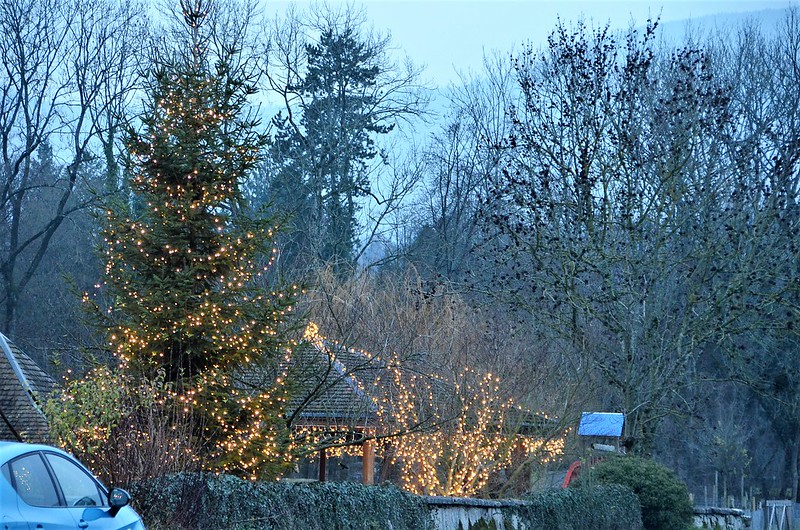 Otherwise I had quit a busy day yesterday. I was finished earlier in the morning with my cleaning and showering and actually managed to get off on my shopping trip half an hour earlier. I do it all now on my own, and I must say I am even enjoying the freedom of the road and supermarket.  I take it one step after the other and it works OK. Mr. Swiss is no longer very good at walking. He also needs a stick for support, and at home now uses his wheelchair more. I have discovered that in spite of my MS, I am still able to do my household chores and even drive the car., although I have an amusing way of moving. I have a good route to the supermarket as it is mostly only allowed 30 kph so I do not have to worry about being too slow and after at least a year not driving, I have noticed that I am back in the old routine again.

Today it is raining, so I probably will not be making any journeys, but you never know. If the rain stops in the afternoon I might saddle my wheelchair again for a few photos. Oh, and before I forget, yes, today is my birthday. I only get it once a year, so thought I would make a public announcement. At the age of 72 years I am still blogging, taking photos, and even cooking. Actually all this birthday celebrating stuff is not really my thing any more but it is nice to still be here.

Have a good day everyone, make the most of it. Today is also St. Nicholas day, so have a happy one if you celebrate it in your country. 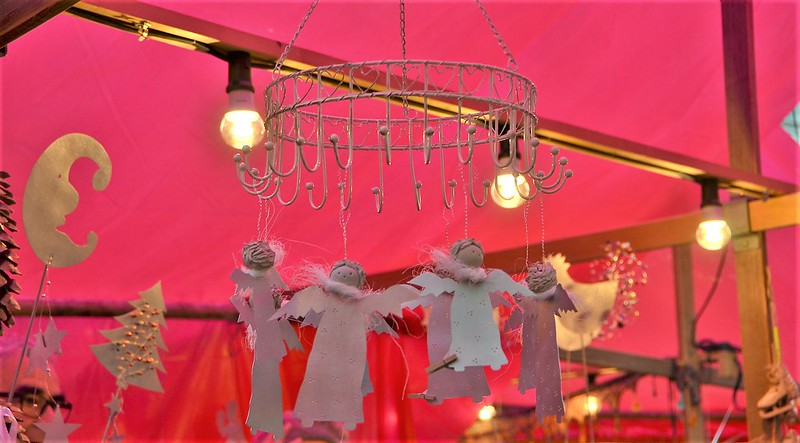 One of the decorations on the Christmas market.