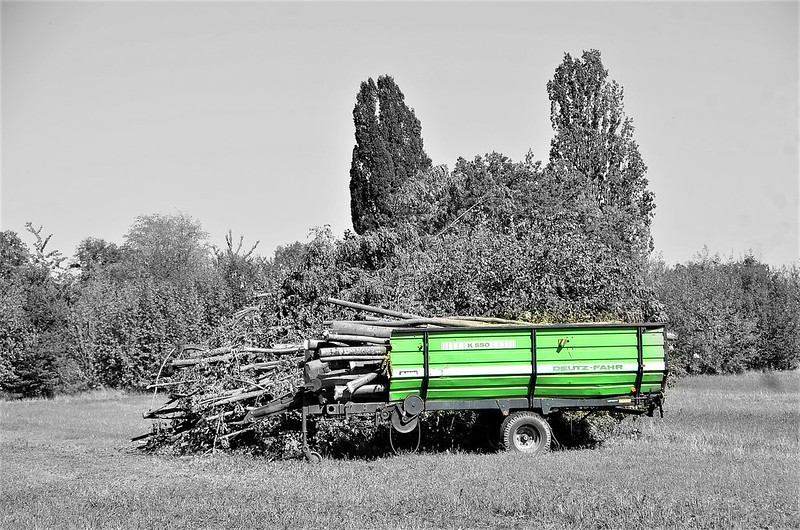 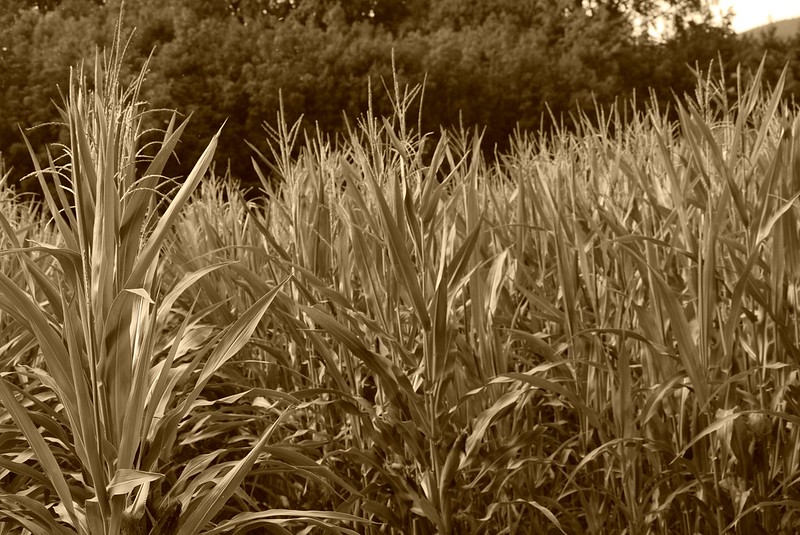 The corn is ready 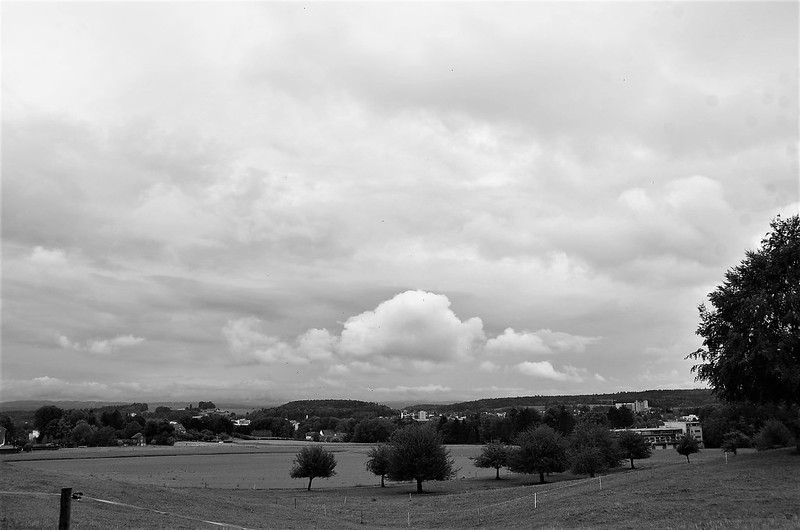 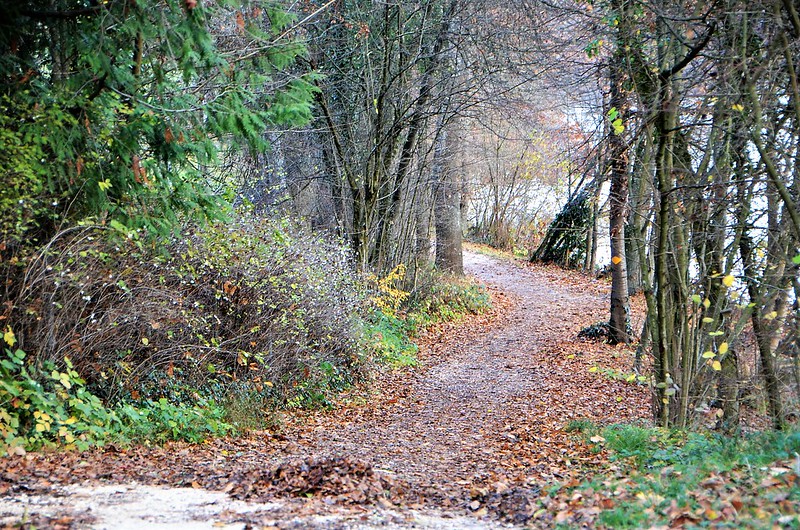 A walk along the river 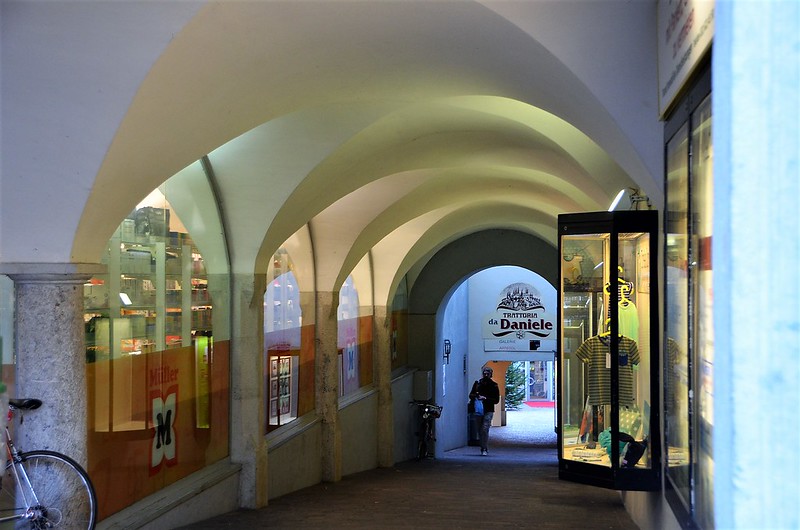 One of the alleys in our local town 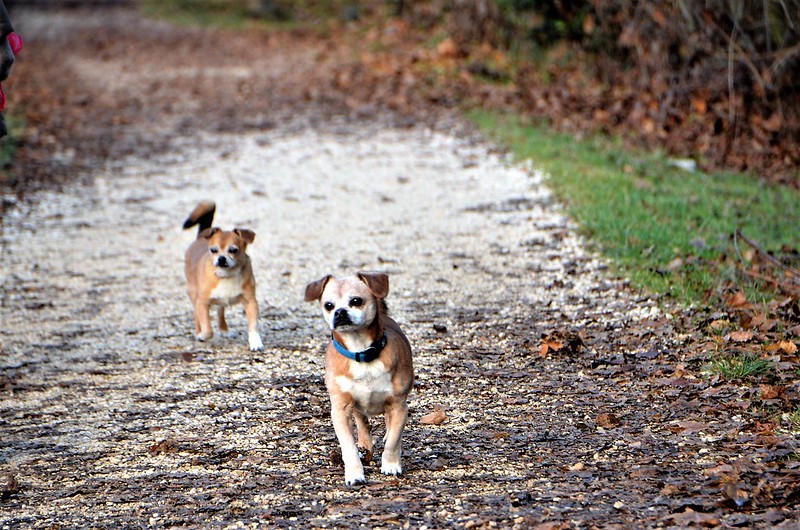 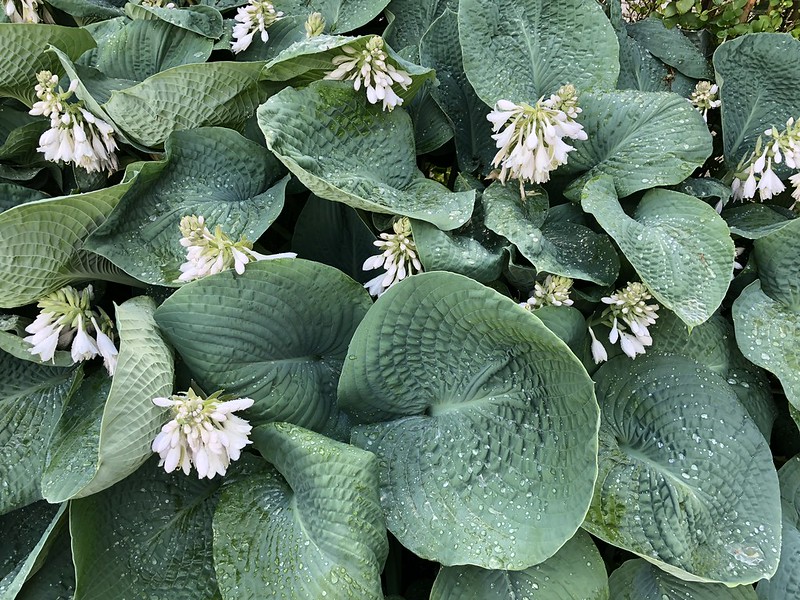 They have been in my garden for at least 15 years and every year it seems to me that the leaves get bigger. Even my gardener has remarked on their size. 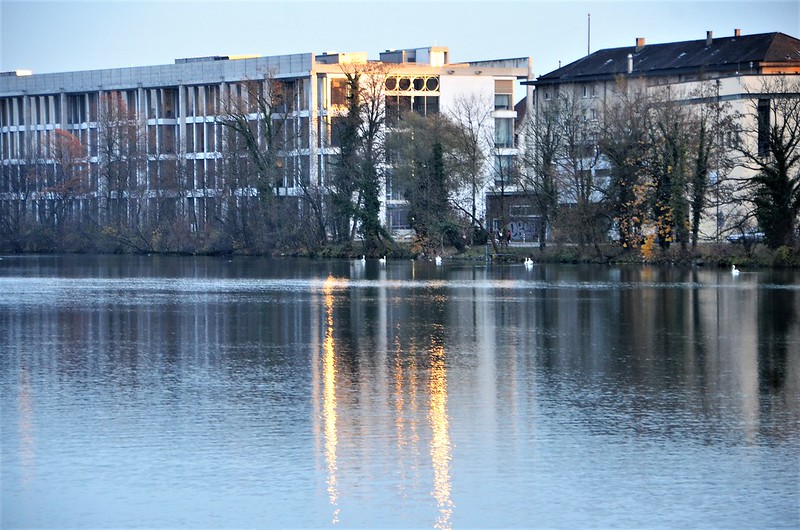 Yesterday I went for a wheelie
In my chair, later than ideally
But I saw the world with different eyes
Light appeared, guided by the skies
The sun was reflecting on glass so bright
And then on the river, which made more light
My camera was ready to capture effects
And so I wheeled on to see what was next
It was not the usual dull of grey in the clouds
Where everything was covered in the usual shrouds
I wheeled along the riverside see what was in town
I was not disappointed and found another gown
The windows of a building were reflecting the sun
The contrasts arrived, the afternoon was won 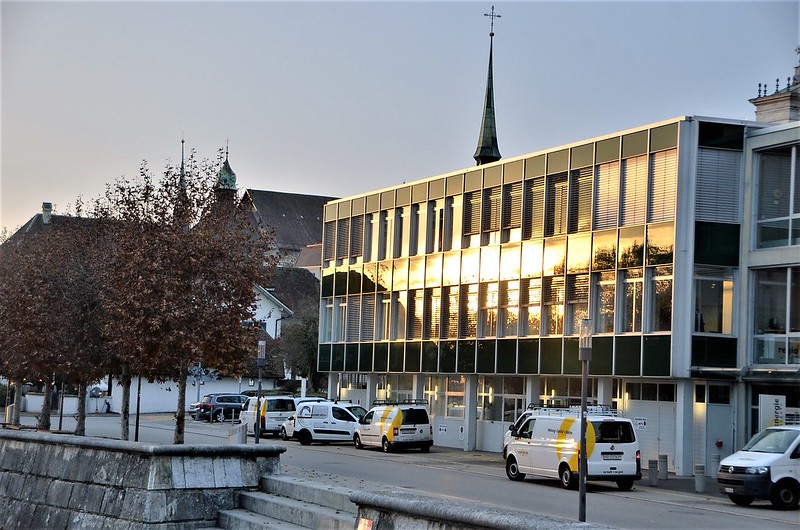 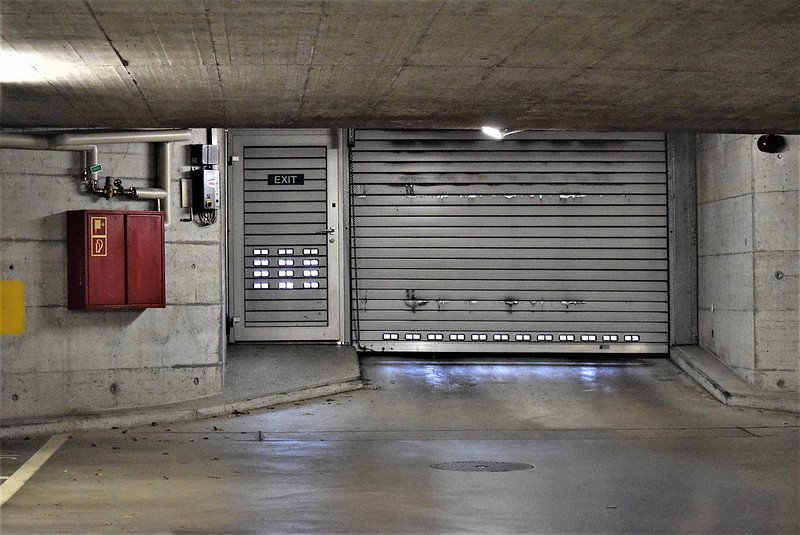 Approaching the closed garage door yesterday morning, I was unaware whether I could still do it. I turned the key in the car ignition on my own for the first time in half a year and the car moved on. I was on my way again, alone, to the unknown.

I was unaware if I could park the car at the store parking lot, unaware if a special space would be available for the handicapped. It was, another unaware struck from the list. I was unaware if I could walk the space with just a stick for support to the supermarket trolley, but I did it. These were the things I had only done with Mr. Swiss at my side since the year began.

I shopped, piled it into the car boot and again walked the empty space to the trolleys. I deposited my trolley and walked back alone again with just my stick for support and arrived in one piece at the car. My unawareness was gradually promoted to confidence.

I drove off in the car on my own, proud of my achievement and arrived home in the garage. As I was aware that I could only manage to bring one bag of shopping to my apartment, I had packed the goods I needed immediately on one bag to deposit in my walker, and the others I left in the car.

Now the awareness left me and the unknown happened. I took my walker, it slipped out of my hands and as the breaks were not fixed, it sailed to the other side of our large underground garage on it own. My stick was already fixed in the walker. I looked around but apart from the parked cars I was the only living person in the garage. I now had to make a decision. I tried to call Mr. Swiss in our apartment, but our garage has no signals.

The decision was made. I had to walk alone across the garage to my walker without support from my stick, which was sitting on the opposite wall. Head up, look ahead and not down, and move one leg after the other. Just pretend you have your walker with you and …… I did it. I am superwoman, no longer the bionic disaster.

So and now I have written it down for future generations. Every day has its adventure. 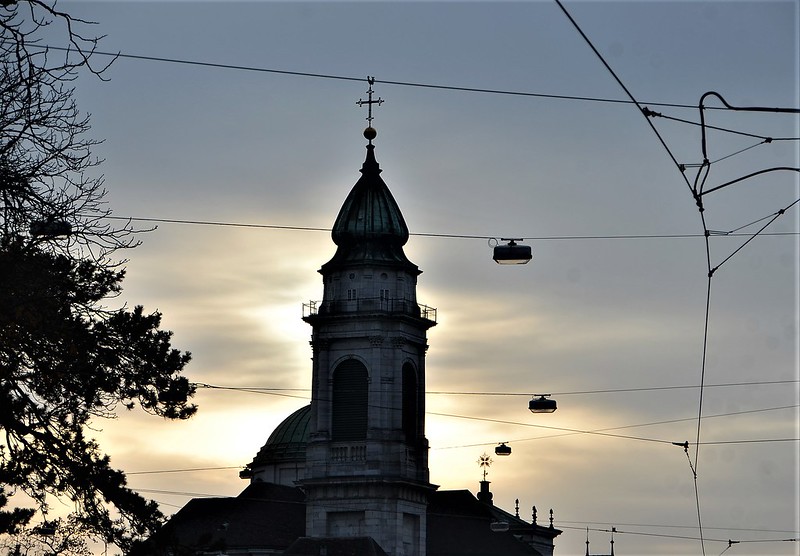 They let me out yesterday afternoon for a wheelie in my chair. I was a little later than usual, but that has its advantages as I could catch the setting sun behind that town making a few interesting photos. The first landmark you see of Solothurn as you approach is the cathedral tower which was looking good. As I crossed one of the bridges on my way home I was taking a few photos of the River Aare when an elderly couple passed me and the guy said that now is the time to capture the atmosphere. 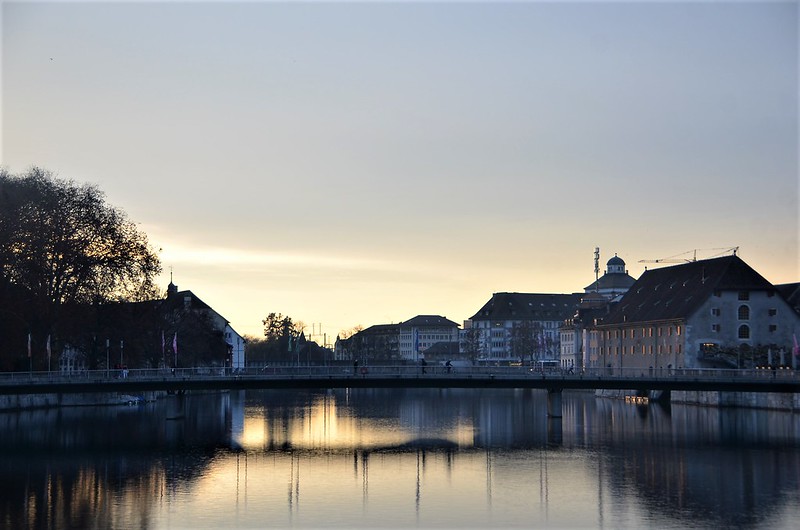 And the river had some really interesting reflections. I should go more often later in the day, but am not so keen on travelling in the dark. The twilight effect is OK. 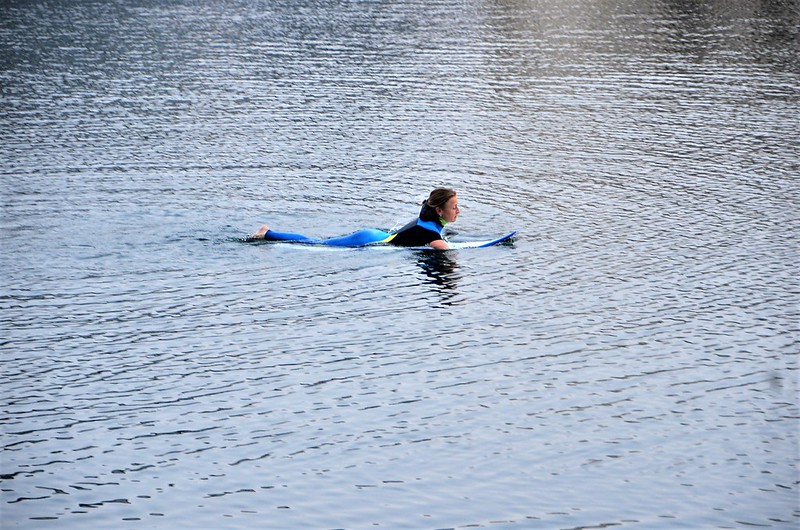 When this young lady passed me on the river having an afternoon swim I was really astonished. Temperatures were around 5°C and not exactly warm, but it did not seem to bother her: proably had some Amazon blood in the veins. Later on my walk through town I saw a young man with shorts on, and another with a t-shirt and no jacket. I am not sensitive to cold and always wear short sleeves, but under my Winter jacket. We seem to have strong people in our area. 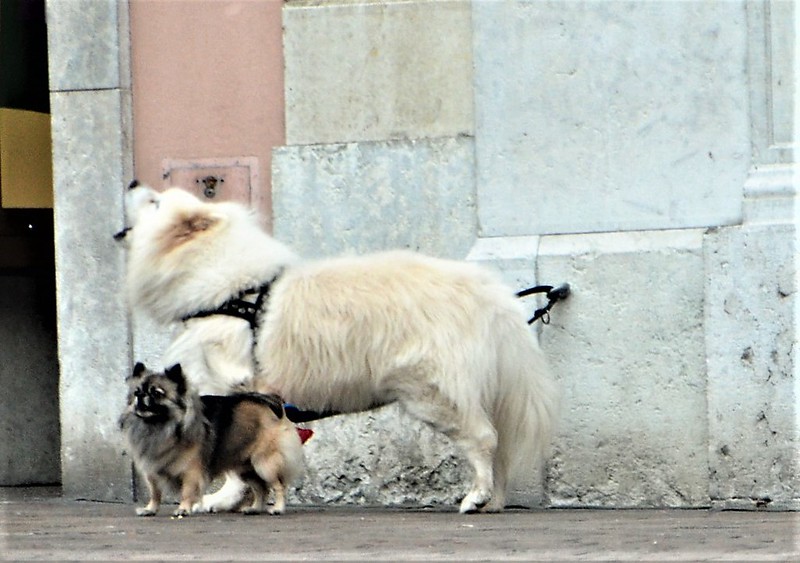 I also saw these two dogs in town, although I heard them first. They seeemed to be having a good yap about something: probably waiting for their owner and getting bored. 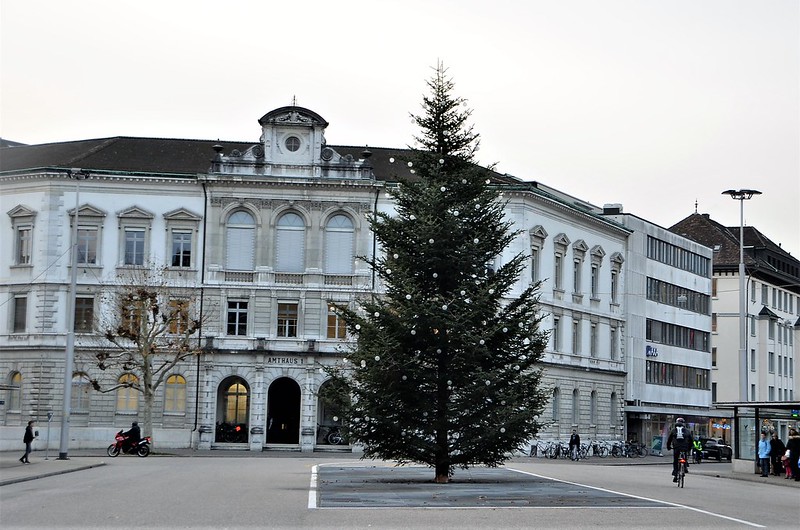 I wheeled onto our Amthausplatz which is just outside the walls of the town. It is the square where we have our local government buildings and courts. They always have a Christmas tree. After touring around town, we seem to have Christmas trees in many places. 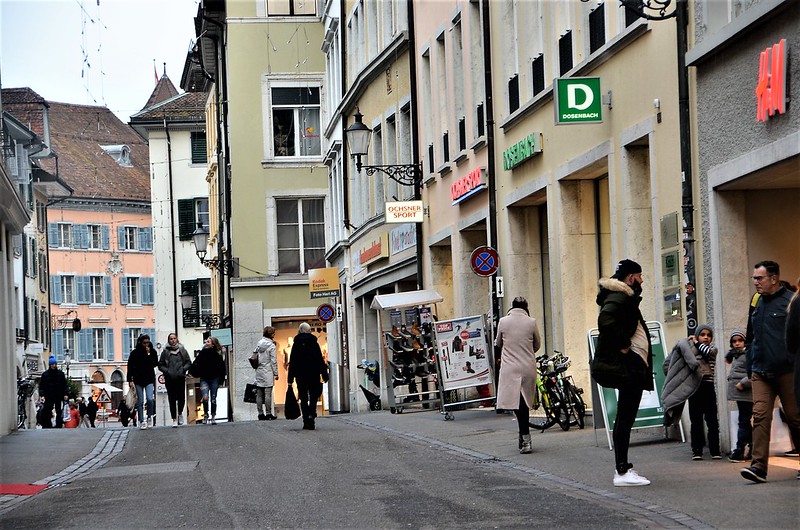 The town itself had a few people walking around, but more mothers and kids. On Wednesday afternoons the schools are closed and it is the opportunity to go shopping with the kids, although no longer as important as it was. You can now get the stuff they need online, so why drag them into town. As a compensation of the free Wednesday afternoons, the schools are open for business on Saturday mornings. I was always against this system. If you are a working mother during the week, then you are glad for the free week-ends and do not really want to rise early on Saturday mornings and get the kids off to school. I found this such a nuisance. 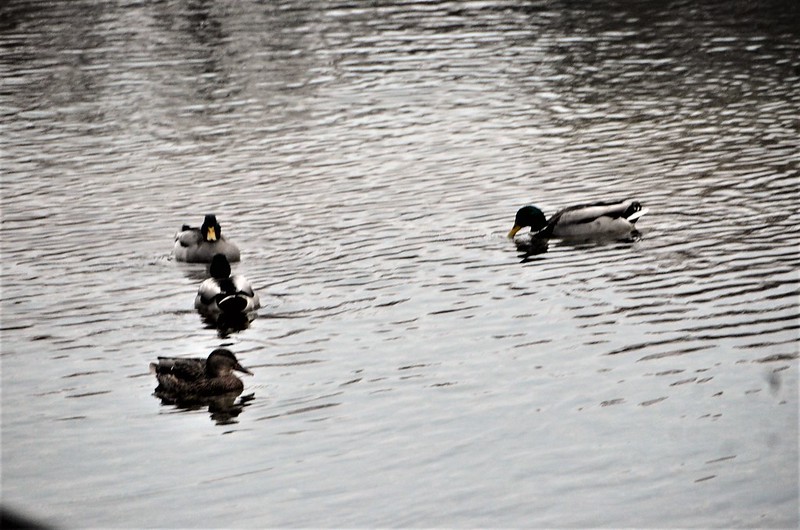 I decided to wheel home along the river bank and was glad to arrive eventually. There seemed to be a duck gathering in progress. It really gets darker earlier now in the evening.

Mr. Swiss was not at home and as I was working out how to enter our building on my own in the wheelchair, when one of the neighbours appeared, so it was no problem an she opened the door for me.  Today is the day of replacing the linen on the beds. It was always a difficult job, but now is almost a full days work since we both have our movement problems. Mr. Swiss said wait until No. 1 son is at home, but I like to do what I can and it also does me good to have a task, even the difficult ones. Afterwards I feel glad that I can still do it.

It is a misyt morning, but the sun might appear this afternoon. If I feel like I might go places this afternoon. Otherwise I will curl up with my computer or just have a longer sleep after lunch. Oh the decisions of a golden oldie.

Did I tell you that yesterday morning I went shopping all on my own? I bravely took the car and drove to the store, parked and got the trolley and walked with its support into the store. I worked through the shopping list, and afterwards loaded it all into the car and drove home and I felt quite proud of myself. Admittedly it was not the half hour shopping I used to do, more than an hour, but I could still do it. The nice thing with driving today is that they have clamped down on the speed limits and nearly all the roads are only 30 kilometers per hour as they are side roads. This suits me, no rush and there is also not  very much traffic. It was the first time I have driven the car since summer, but it still works for me. 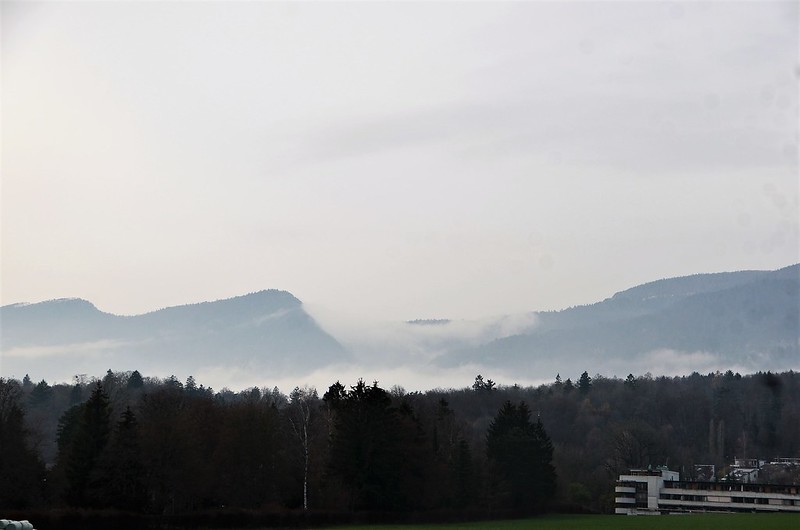 I now leave you with a view of our Jura mountains. Enjoy the day wherever you are. I now have to go and finish the bed making.