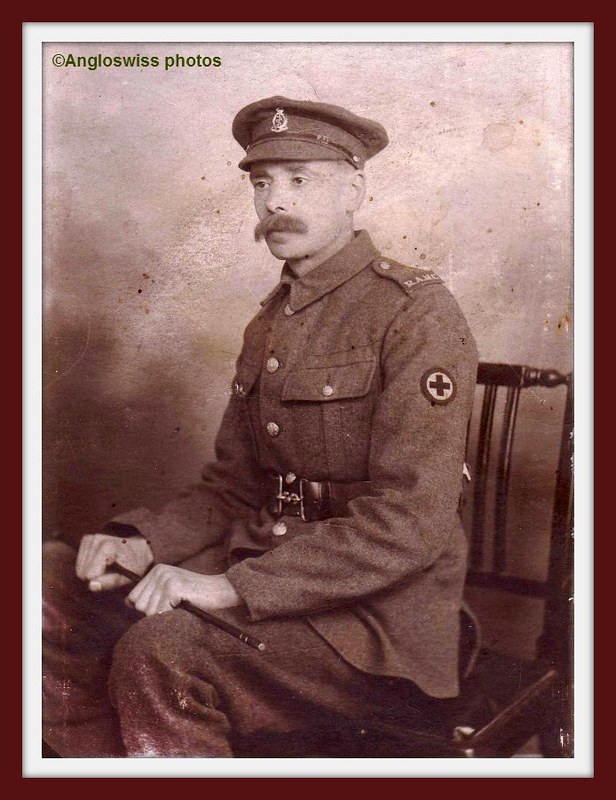 My paternal grandfather was not a hero, but in 1914 when he country ordered him to fight he went and advanced to the front. He was no longer a young man, but they needed everything they had. My dad was on the way, born in 1915 and my grandmother had her two other daughters. So grandad packed the little he had and was on the way to France. His first taste of being abroad were the fields of war.

The badge on his arm means he was in the Medical core and his work? Not treating the injured and dying, but collecting the dead in a truck as my dad told me. He was working class in daily civilian life, as were all our family, and his work was as nightwatchman in the City of London for Lloyds Insurance company. The company had promised him that his work would still be there after completing his army duty for country and King, which it was.

I remember him as being a quiet man, a real grandfather with his knitted jacket and pipe. My dad told me he was a bit of a wild one when a younger man and once spent a night in prison because he had a fight with a guy that in his opinion insulted my grandmother. He loved dogs, but only the greyhounds, those that competed in the races and like to have a bet.

Another little anecdote from my dad. When my grandad came home from his war service he arrived at the door and my grandmother was of course overjoyed to see him. She now had a three year old toddler holding her hand, which was my dad. He remembers asking his mother who that man was at the door. She told him it is your father.

War can be complicated.

16 thoughts on “FOWC with Fandango: Advanced”