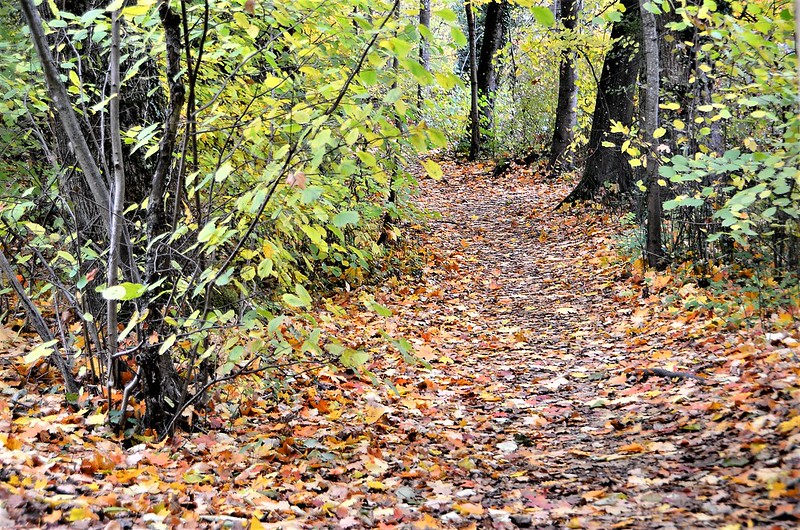 I went to town yesterday and took the river path home. This is one of the alternative parallel paths which I do no actually take, because there are too many tree roots and not so smooth for a wheelchair ride. However, hovering at the beginning I got a shot of pure Autumn. The leaves are tumbling fast and furious and now form a carpet, a photographer’s delight. 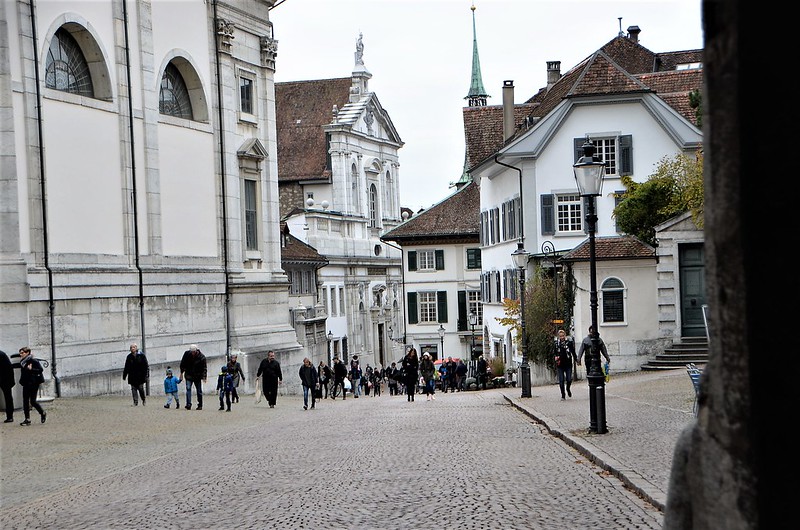 I like Saturday afternoons in town as it lives a little more, and has more people. The morning would be ideal as it is then market, but my mornings are busy with waking up and gathering energy. As I entered town I already saw people coming and going. On the left the walls of the St. Urs cathedral and straight ahead the Jesuit church. I have a small connection to these places, although I am not a member. My No. 2 son sung in the boys choir and often had engagements. Christmas was a busy time as the choir performed Handels Christmas Oratorium and they had engagements in other churches as well. Those were the days when his voice had not yet broken. Now he has a son of his own, just a little more than a year old, but perhaps he might also be singing in a choir one day. 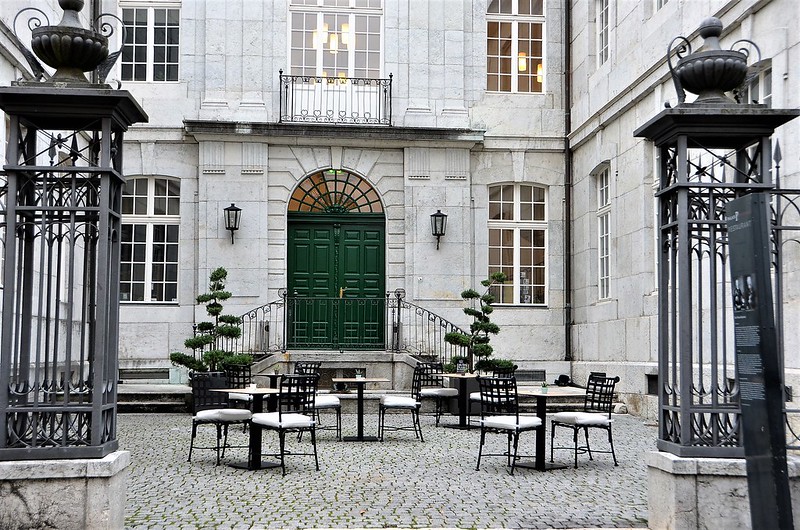 As we approach the colder days, many of our restaurants are now emptying outside. This is our Palais Besenval, built by the French nobility for the French nobility around the 18th century. It was used as a residence at the beginning, but over the years changed hands. Now and again there would be an art exhibition held there, but today it has become a very stylish restaurant and belongs to the Kanton.  During the summer people sit in the forecourt or on the outside balcony overlooking the River Aare. There is also a very nice baroque garden. 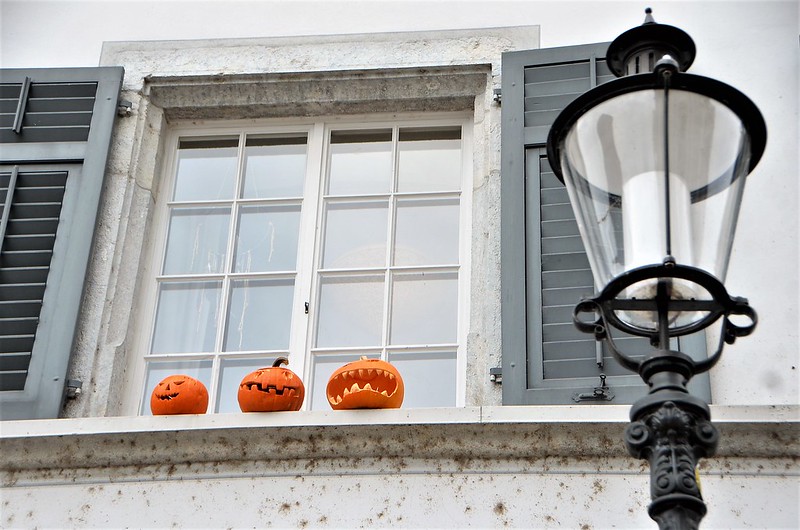 I noticed we still have a few reminders of halloween from the town decorations. These carved creations were sitting on the window sill of one of the old town houses 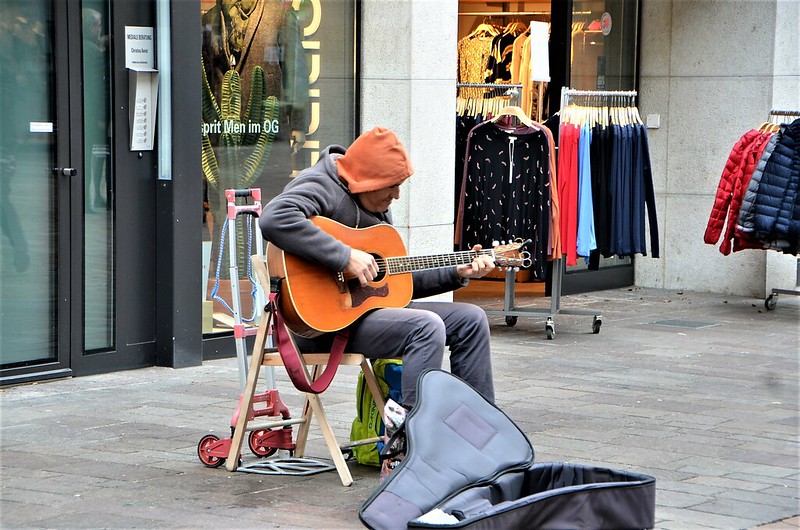 Moving on I discovered yet another street musician. He was not too bad, playing his guitar and singing in accompaniment. I am sure if I was working in one of the shops behind him the music would be a little annoying with time. 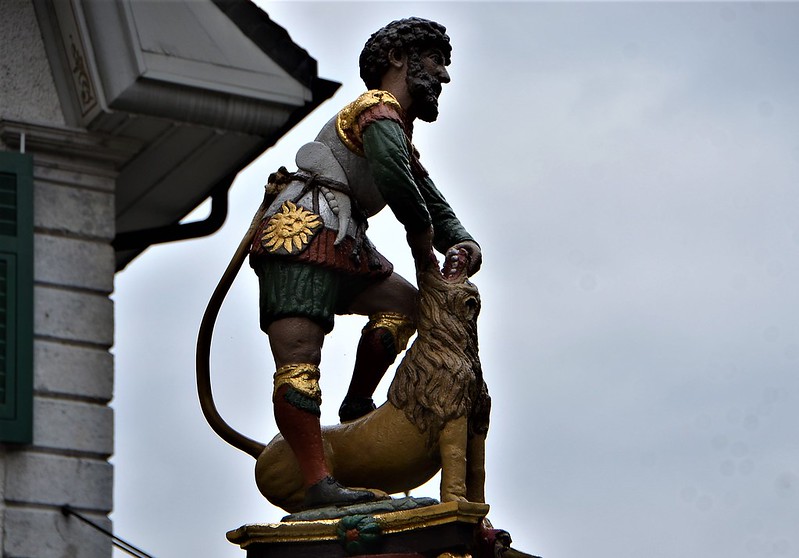 I also took a wheelie past the St. George’s fountain, the guy that killed the dragon, although not in Switzerland. It is a British thing. We have 11 fountains in Solothurn (11 being the Solothurner number – do not ask me why) and I am now getting to know their names and their positions. Isn’t photography a wonderful hobby? 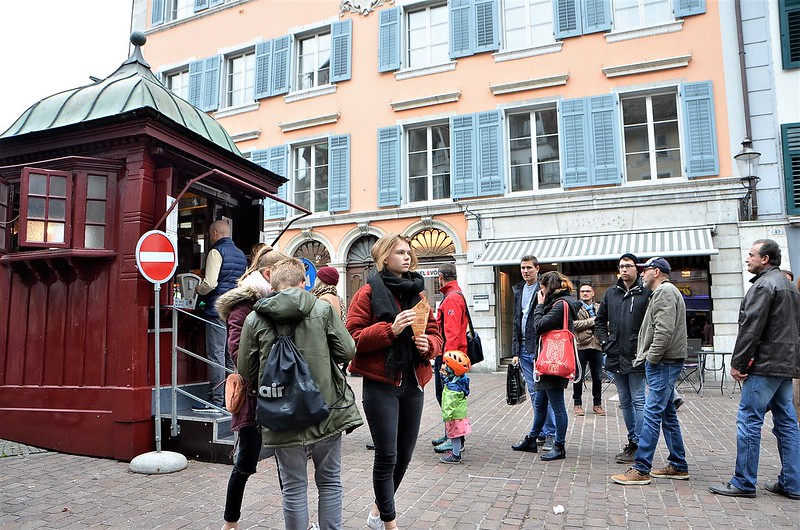 Our hot chestnut roasting kiosk was busy as always and the usual queue was waiting patiently for their paper bag filled with the chestnuts. In my earlier walking days Mr. Swiss and I would often treat ourselves to the delicacy when we were in town. It brings back many good nostalgic memories of a life we once had when we were not yet golden oldies. Now I am in a wheelchair and Mr. Swiss walking with a stick.

So enough nostalgia, brings a little water to my eyes when I think of the days gone by. Eventually I made my way home via the river to say a few hellos to the ducks and swans on the river. 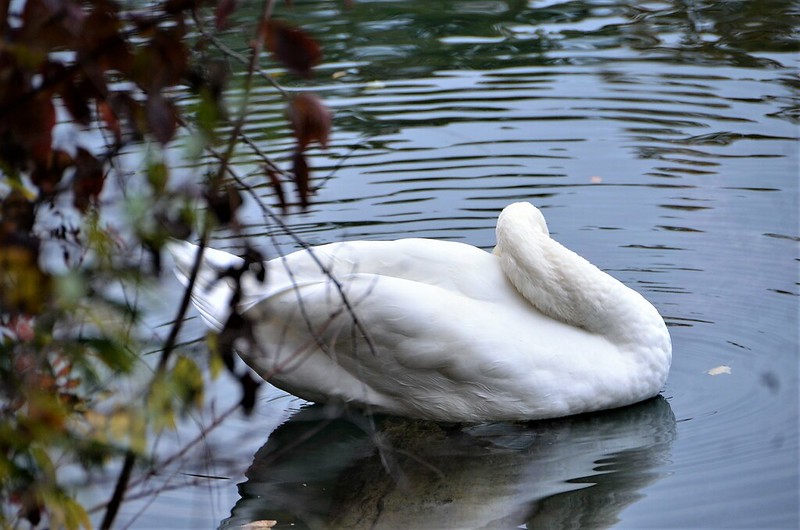 And I nearly forgot these two dogs. I was wheeling along and there was a couple with teir dog, but not on the lead. It was the path leading to the river and then another lady approached with her dog, the white one on a lead. 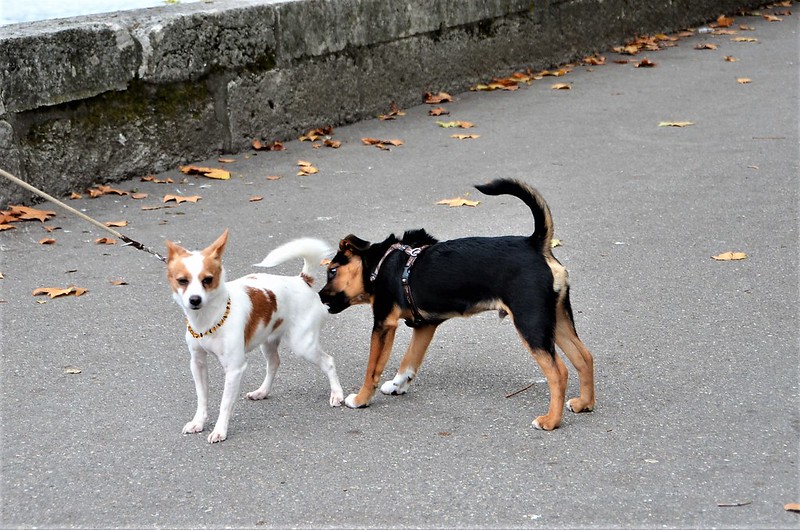 They had a sniff at each other, but the dark one had his interest aroused. I heard that lady with the white dog say that it was the first time for her dog that it was in heat (at least I think that it what you say in english). Dark dog got the idea and then his owner connected him to the lead. I must say there were laughs by all, but I do not think that the white dog had her first encounter of the third kind.

And now I am off to do what I must do, let’s get the red cabbage cooking for lunch with a side of ham and potatoes. One of the thrills of a golden oldie Sunday. Enjoy your day, and make the most of it. I will not be going places and seeing things, but spend a nice quiet day at home as golden oldies should.