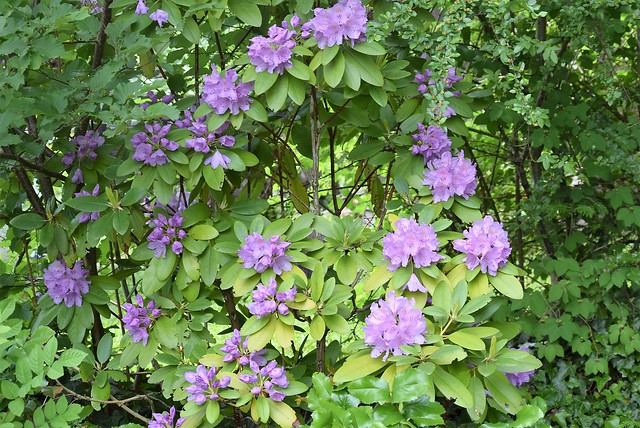 Another photo from the beginning of Summer

Tell us the spookiest campfire story ever! We love being kept in suspense.

It was almost midnight and they were all tired. The campfire was dying, the last embers just a few wisps of smoke. Jack decided to smoke a last cigarette before retiring to bed in the tent. The others had gone some time ago. He was alone in the middle of the forest, the only noise an owl hooting somewhere in the dark.

His cannabis supply was enough and he decided to have one before going to bed.   Smoking them was better alone. The others always made stupid comments or wanted to share. He  discovered that he had no matches or lighter. Perhaps the others could help, but he only heard sounds of soft snoring and heavy breathing in the background and did not want to wake them, they might want to join him.  And so he sat there alone with his unlit cigarette. This was frustrating, the pull of the cigarette was strong and then he heard the sound of a match scraping and a flame appeared in front of him. At last he thought, but when he saw the hand holding the match he changed his mind. Since that evening sitting alone around the remains of the camp fire, he stopped smoking.

Daily Inkling: Around the Campfire 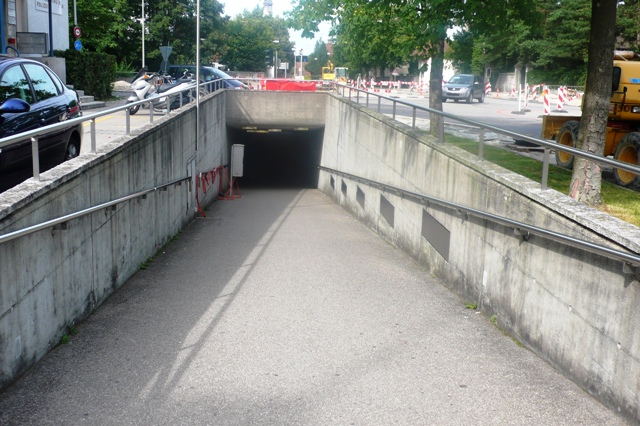 My world has become dingy. I now travel by wheelchair locally when not using the car and this means that crossing roads is an ordeal if the kerbs are too high, or low. It is only with a bump that you manage to descend.

The slopes and the ramps have become my friends. I know each one on my way into town. Of course there are also stairs as an alternative, but they are out of my reach. I now let my chair wheel on down and up, even in top speed and the suspense: you are perched at the top and see the way leading into a dingy atmosphere, a darkness which could contain surprises. Perhaps you hear a dog bark, babies crying and conversations echoing from the walls

Yesterday due to the cold, I took a new route to get me home quickly and descended into the depths hoping I would ascend again in the right place. Wheelchair riding is full of surprises, especially when you are travelling on unknown ground, but I have my solution. I say if you arrive where you do not want to be, then turn around and go back and try it again. And those tunnels can be quite interesting. 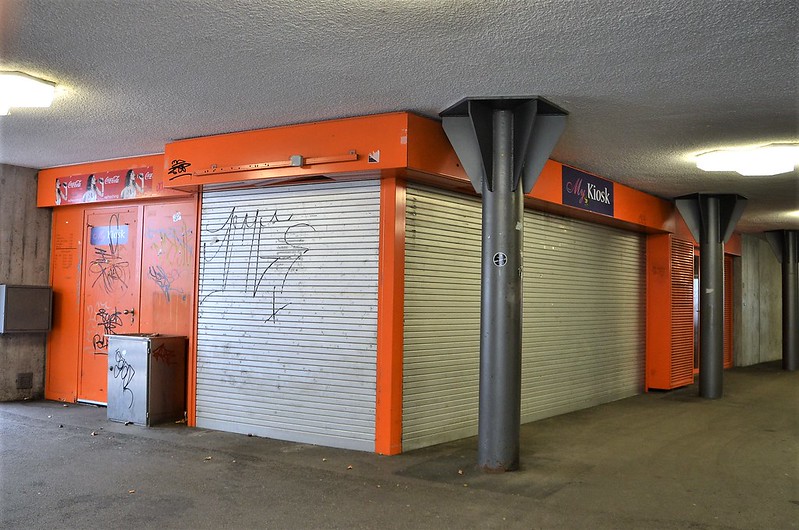 Perhaps you stumble across a kiosk that you remember being used 20 years ago. It was closed. It was a busy place where customers would buy their newspapers, magazines and even lottery tickets. One day it was sealed up, the blinds were closed and it became an empty dingly container I often wonder what now exists behind the closed front. Have the mice taken over, or is it just the dust and dirt of the years. I have never seen anyone enter or leave the deserted kiosk, just the left overs of a dingy place.

So and now back to the bright lights of home, although it is dark outside, but even there a light often shines in the darkness. 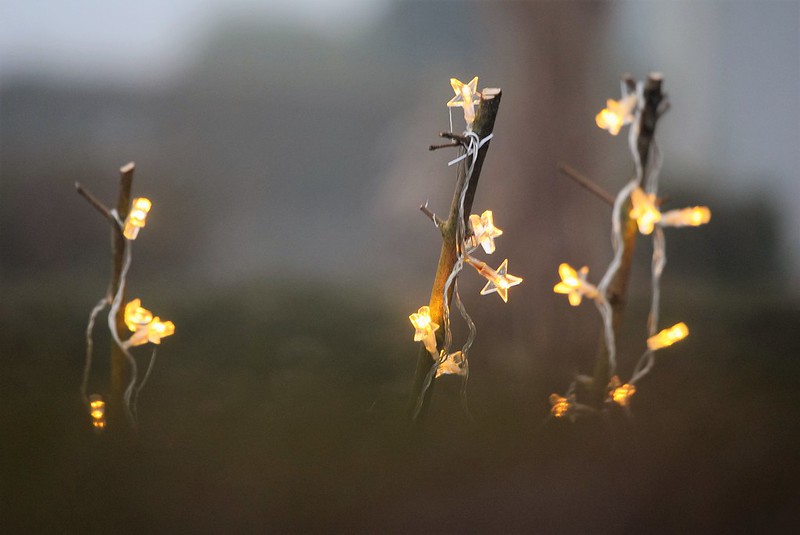 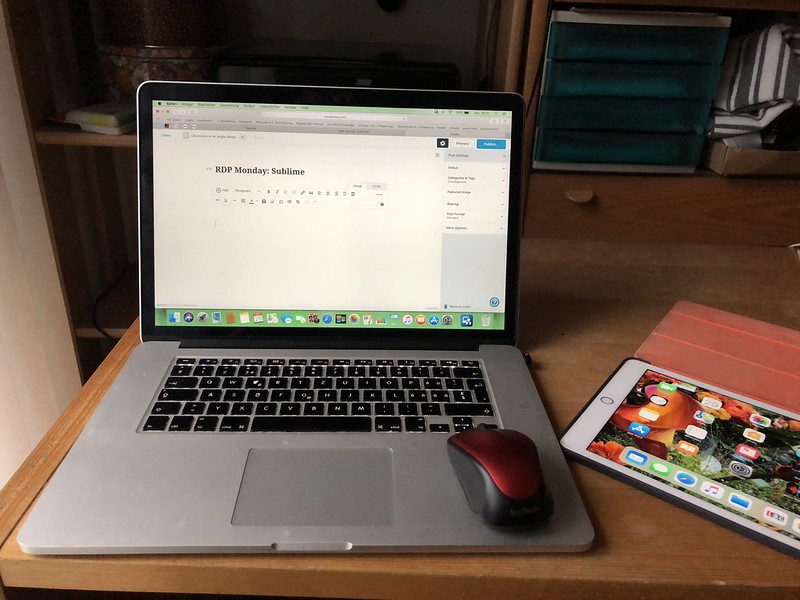 From the sublime to the ridiculous comes into my mind
We all have computers but technical makes us blind
The cyberland experts always make things new
We are never actually asked what we want them to do
Why repair it constantly when it is not broken
Wanting to do their best, although the programmes are bespoken
It all works so perfectly, and then we get an update
Everything was at your fingertips but suddenly it’s too late
Instead of writing an A, we have to write a B
Your intelligence says no, it is new, you have to see
And so we tear our hair out and might even swear
But the sublime to the ridiculous really does not care
What is necessary must be, computers go forth
In all points of the compass and even the cold north
So leave us alone with all so-called improvement
Are you really doing it for us, or just for amusement?
I like my computer the way it talks to me
Ignoring all your so-called progress, I drink a cup of tea 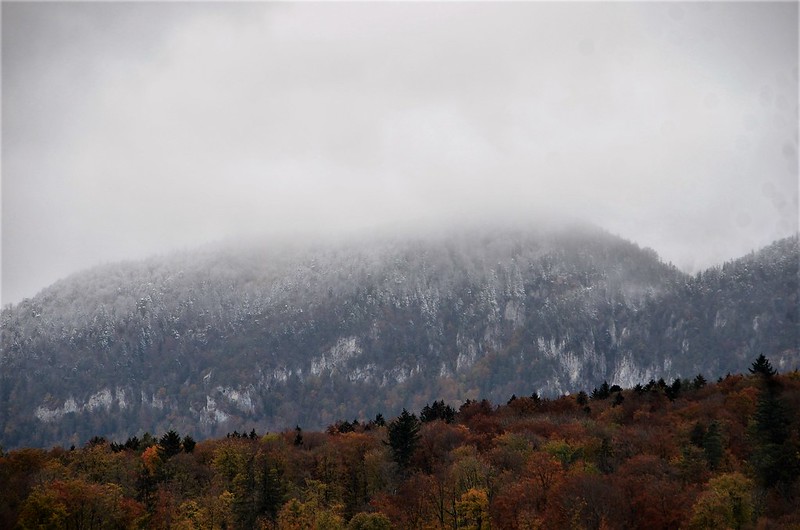 Almost, but not quite – there is snow in the air and a sprinkling yesterday on the local heights of the Jura. It is not yet in the lower regions of our area, but on its way. After six weeks of sun and no rain, the weather is now with us again as usual and very quickly. We usually get the first snowfalls in November, but they have already arrived in parts of Switzerland.

The rain had stopped and so I risked a visit to the local town in my wheelchair after being at home for a while. 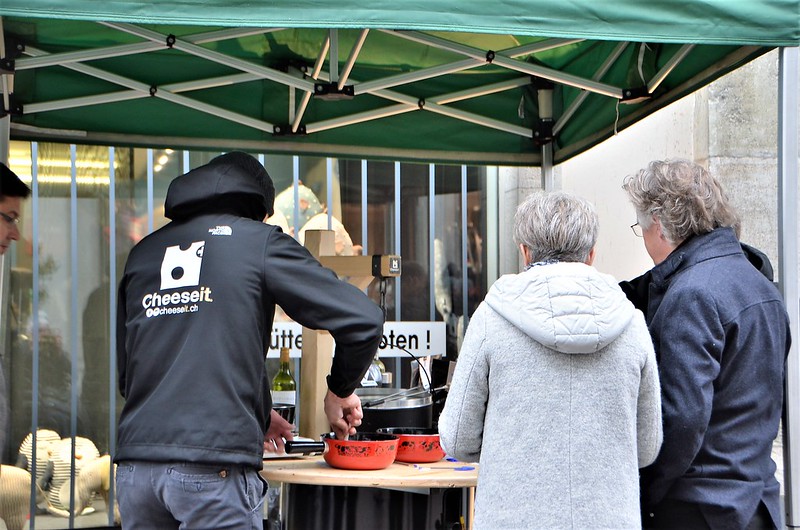 One enteprising store in town, the Kitchen Store, installed a stand outside the window with a fondue oven and bread cubes and anyone that passed by could help themselves to some cheese fondue, which I thought was a very good idea to warm you up in the cold weather. One of the guys organising saw me in my wheelchair and asked if I would like some, he would bring it to me. Although it was tempting, I was only there for the photo,  thanked him for the offer and moved on. 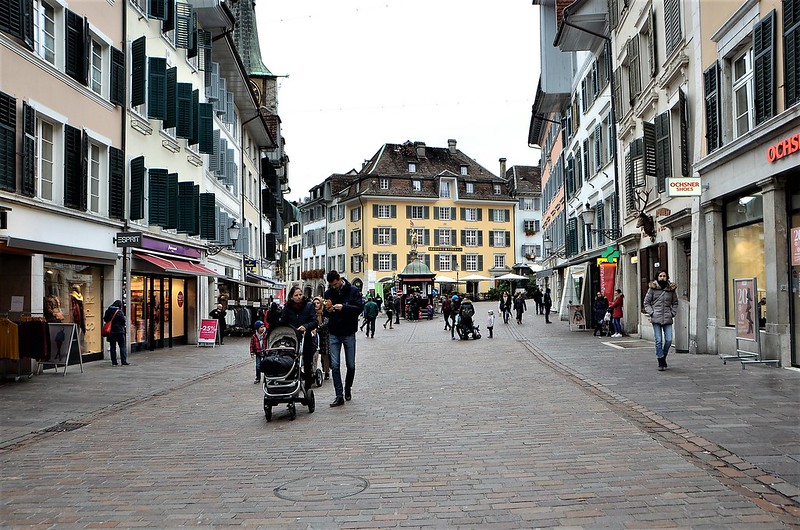 On Sunday there are never many people in the town, but I soon discovered this was one of the Sundays before Christmas where many of the stores were open. This is the main road of the town, no traffic of course, and in the middle you can see the little hut of our hot chestnut family that arrive every year and stay during the late Autumn and Winter months. It is always the same family, that originate from the Italian part of Switzerland and is tradition. 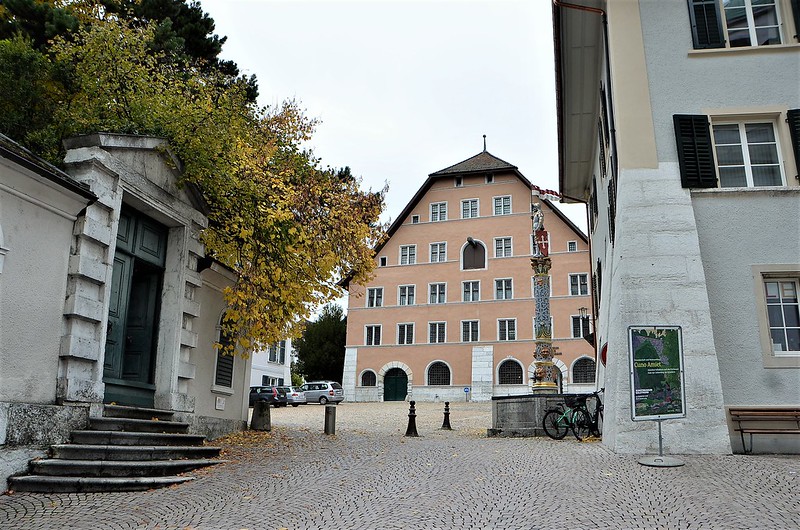 The building in the middle is our old Arsenal where the weapons of the olden days were kept. It is now a museum showing the relics of the weapons and some suits of armour. It was renovated and painted this year, as well as the St. Mauritius fountain on the right. The building on the left shows the entrance to the garden of the so-called Von Roll house, the one where Casanova once spent the night with Lady Von Roll as the legend tells us. Now a normal family live there. 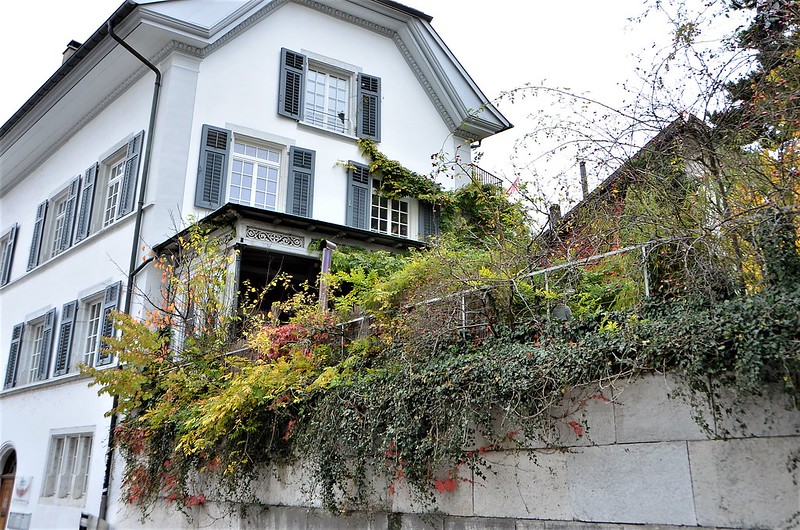 And here is a side view of the garden and house.

As I had forgotten my gloves before I left home, I was slowly getting symptoms of frosbite on my right hand as I need this hand to steer the wheelchair, so decided to take the quick way home in top speed before I became completely frozen. On the way I wheeled past our old fortifications. The grass surface of the moat is now bare, due to the buildings that were covering it during the month of our annual trade fair. 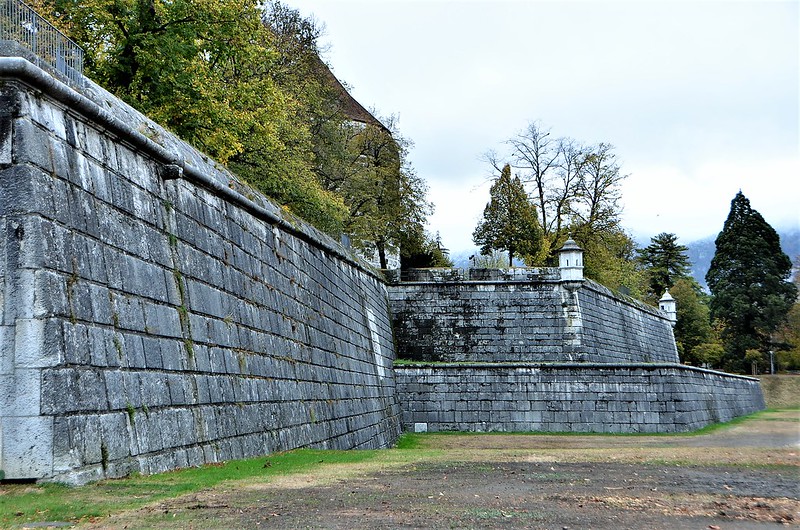 I would now like to add that all photos are my own, taken by me with my own camera and not from Internet. I am saying this because I was rather annoyed last week when I was accused by a person calling himself Joseph Anonymous that I had a photo on a blog stolen from him from the net. The photo in question was included in a comment to my blog in 2016 and not from me. In this connection I would ask my followers perhaps not to include photos from Internet. The person in question not only accused me of theft, but threatened further steps (probably legal) if it was not removed at once. Of course I removed it at once as ordered, but I like to avoid such situations when possible. 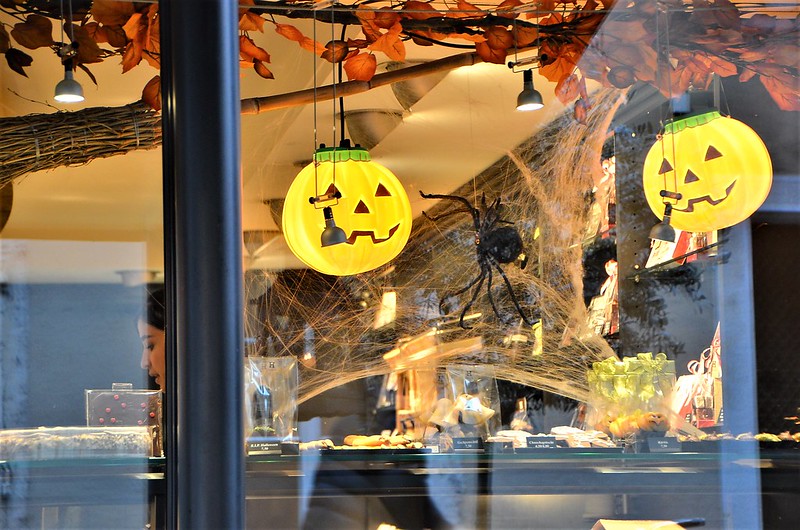 And now to end my little blog on a brighter note. It seems that there are some Swiss that do realise halloween is being celebrated in other countries and one of the restaurant owners decorated his window accordingly.

I am off for a tour de shopping this morning, but this time with socks, warm trousers and my padded ski jacket. Yes the Winter is approaching and this morning we have 4°C with a cold wind.

Enjoy the day, have fun, and ignore the ghosts and ghouls – they will eventually go away. Perhaps you could put out a pumpkin soup for them. They might be cold and hungry. 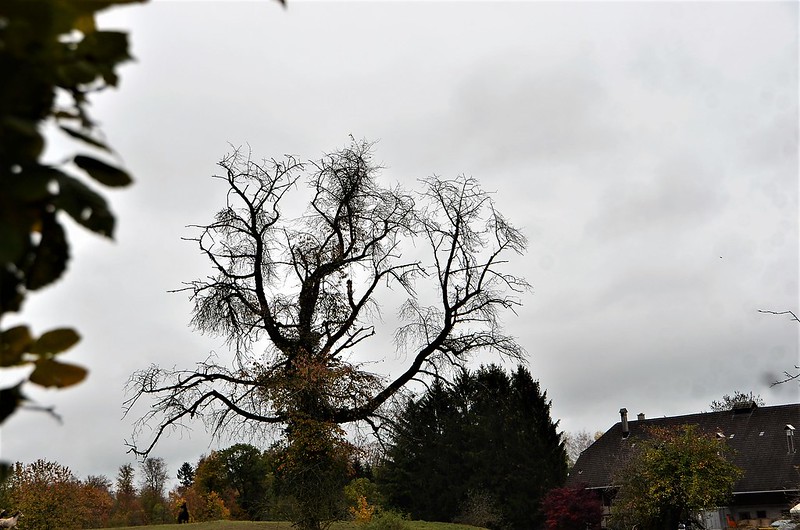