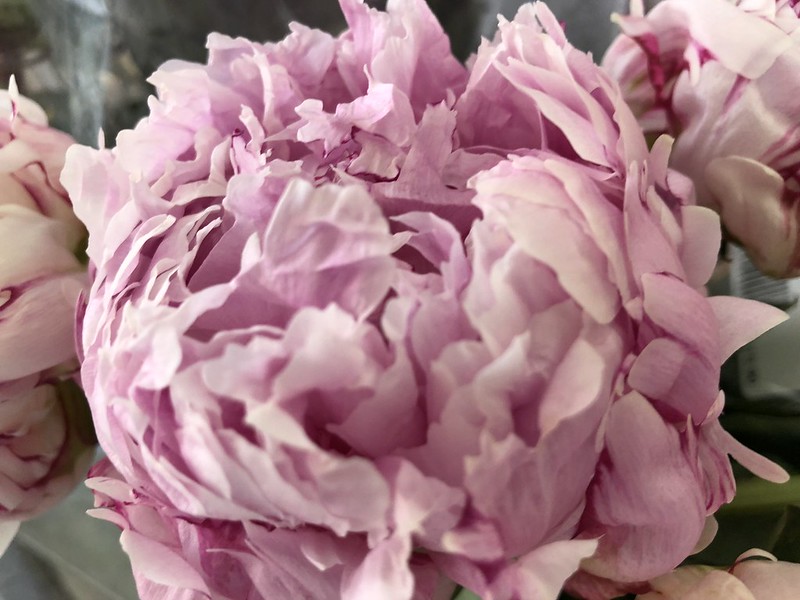 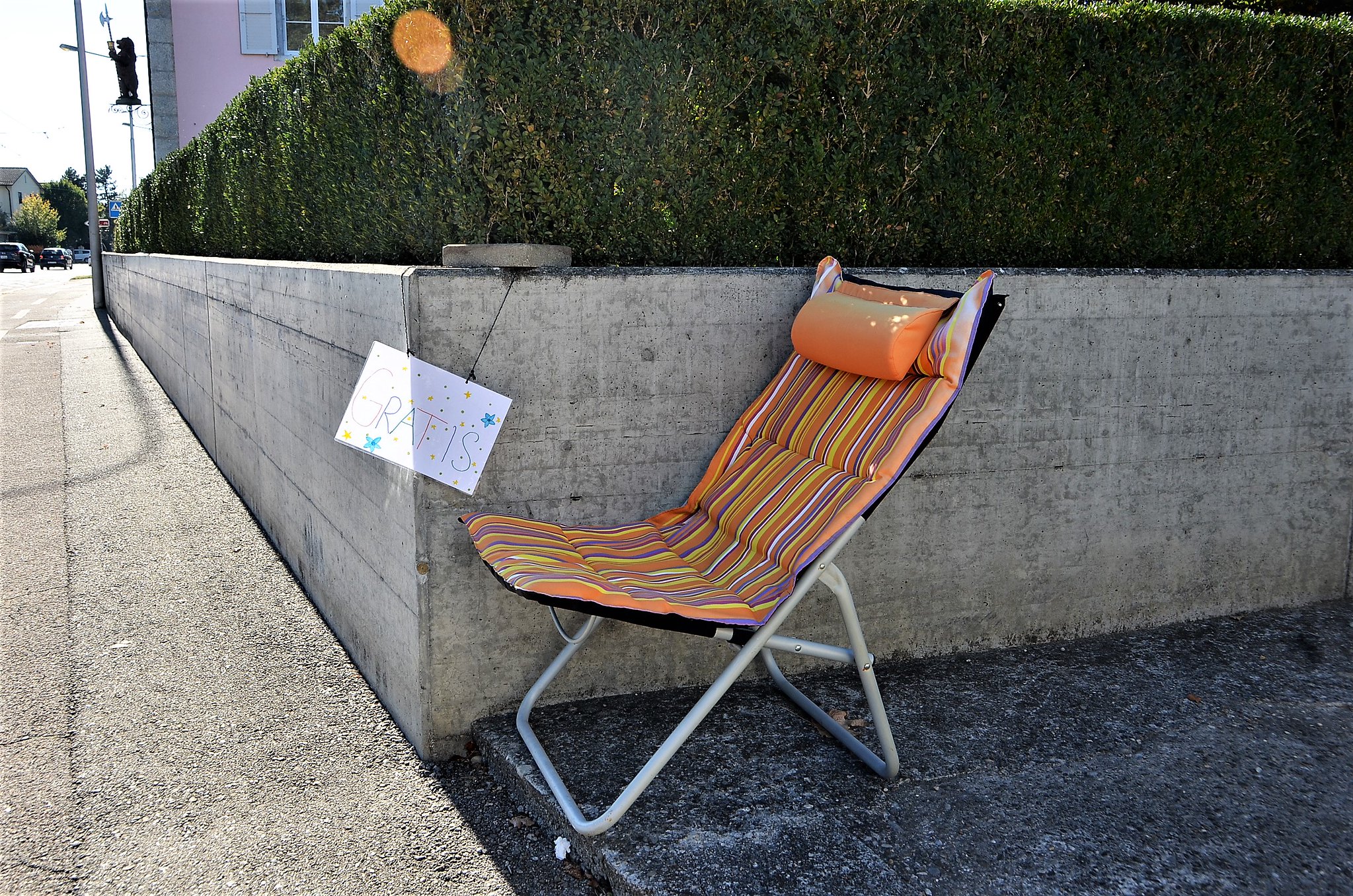 A chair on the sidewalk with a label “free” meaning if you want it, then take it. 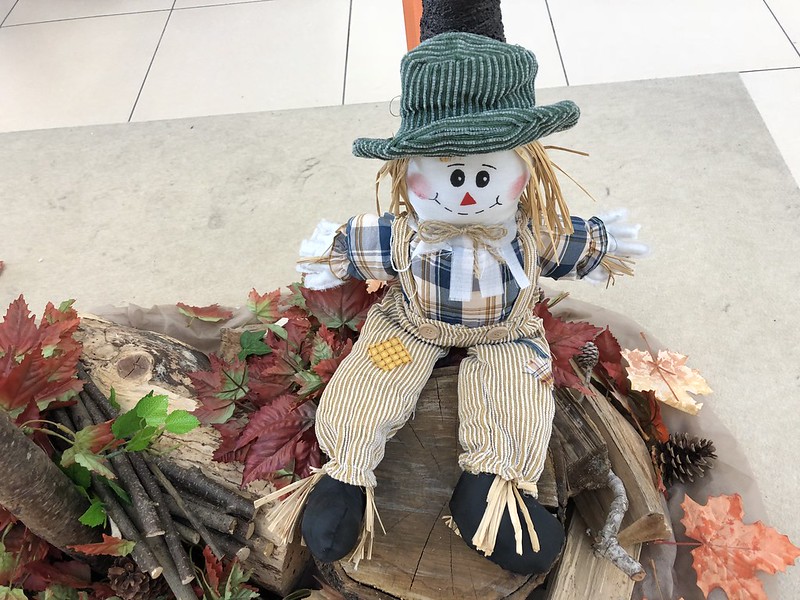 Seen in an Autumn arrangement 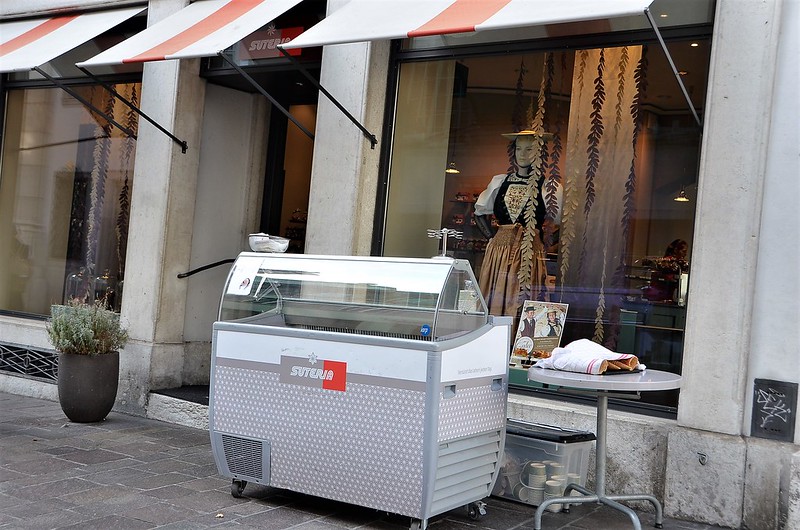 Anyone for an ice cream?

For me it is the Paolo Conte concert in Bern. Paolo Conte is a Italian singer. He plays the piano accompanying his songs. He was originally a lawyer, and did the singing on the side. I know that not many here would have heard of him. He sings his songs in Italian, but mixes a little strange english into them now and again. He calls the music himself razzamatazz, which just about describes it all. I have the complete collection of his recordings.

The concert was in Bern and the colleagues in the office bought the tickets for me and Mrs. Swiss for my birthday. My boss being Italian origins also came with us with his mother who knew quite well. It was in December, and yes it snowed all evening. Who likes driving in snow in the evening. I definitely do not. We arrived eventually, and had a wonderful evening. Paolo did not disappoint. Paolo is still going strong, although now 82 years old. I live in Switzerland and our local language is Swiss German, but Italian and French are also spoken in other parts of the country. I just love this guy and his music. 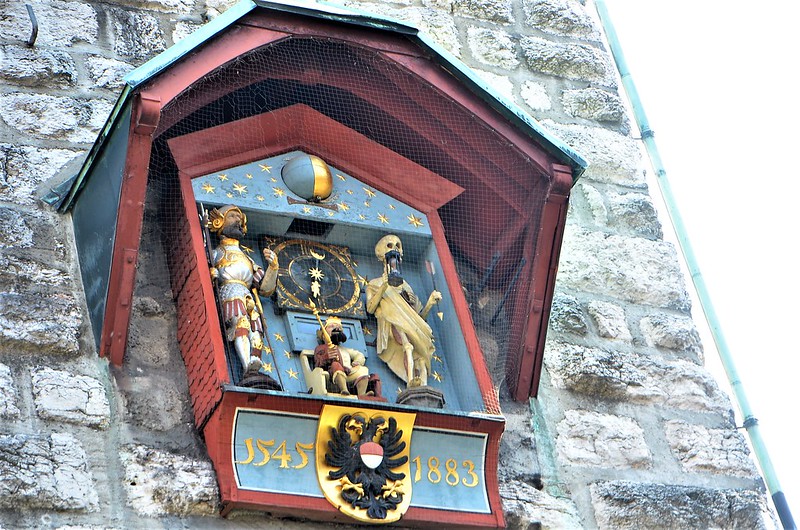 I get fierce if my computer does not do what I want
Try as I do, I cannot be nonchalant
If the power disappears then I can be quite mad
Especially when a plug is pulled I am more than sad
It might be an accident, but I get a contact lost
I begin to breathe fire and my feelings freeze to frost
I stop snarling and pulling hair when the power is on
I know it just a machine, but my patience is then gone
I should return to knitting, or reading a good book
but even then I drop a stitch or lose the page I took
Eventually I go to bed and then forget it all
The next day I start anew and try to play it cool
Life sends these little trials giving us a test
So after screaming and throwing knives, I try to do my best 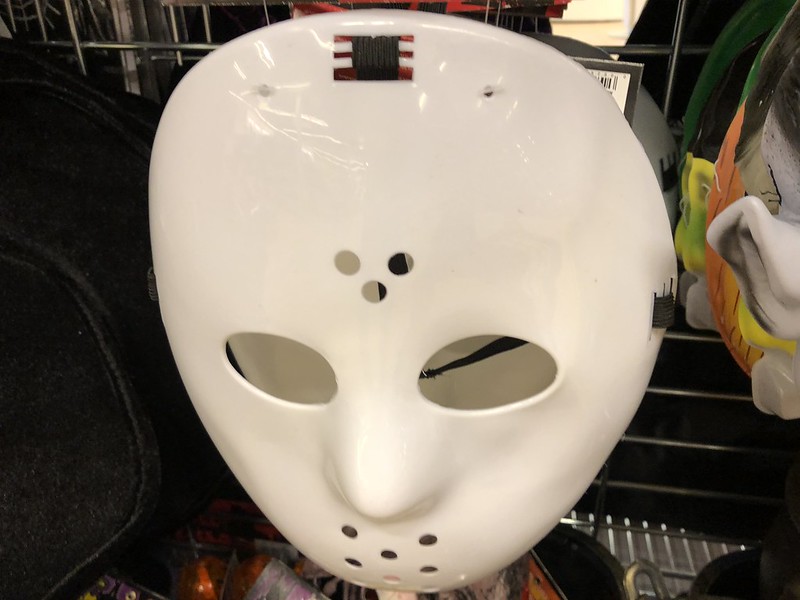 The mask reminds me of many, we give him all our votes
The person who commands our taxes, and afterwards he gloats
Behind the mask there is nothing, the brain is just thin air
Intelligence is not required, it is extremely rare
He has a troop of liars who are sure they are telling the truth
They believe everything the leader says, they possess no wisdom tooth
One day there might be a good idea, but the boss says it is schmooze
It is forgotten, cast away, under the name of fake news
Of course no-one is lying, convinced it’s all so real
Note the mouth has many tongues, they believe in having a deal
The eyes are empty, they do not see, to truth they are so blind
Their leader describes the shape of it all and they all have the same mind
I will not mention names of men, it could also be a lady too
Your find them in governments all over the world, compare it to a zoo 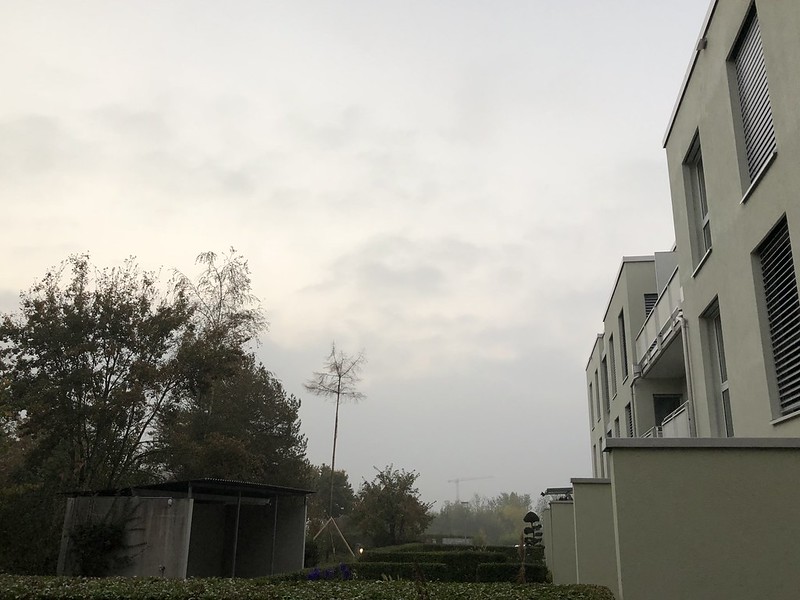 A grey morning with a little bit of mist at the edges, not very inviting. There is also a nip in the air, but it can only get better I hope. I did not go anywhere yesterday except for the shopping trip in the morning. To be quite honest, if I wanted to it would not have worked. I had my usual after dinner sleep and awoke half way through the afternoon. I was all on my Todd (Jones – alone, cockney) at home as Mr. Swiss had to go somewhere in the afternoon. I suppose it was a sort of sleep compensation although I usually manage OK during the night.

And the remainders of the afternoon were spent with my computer. 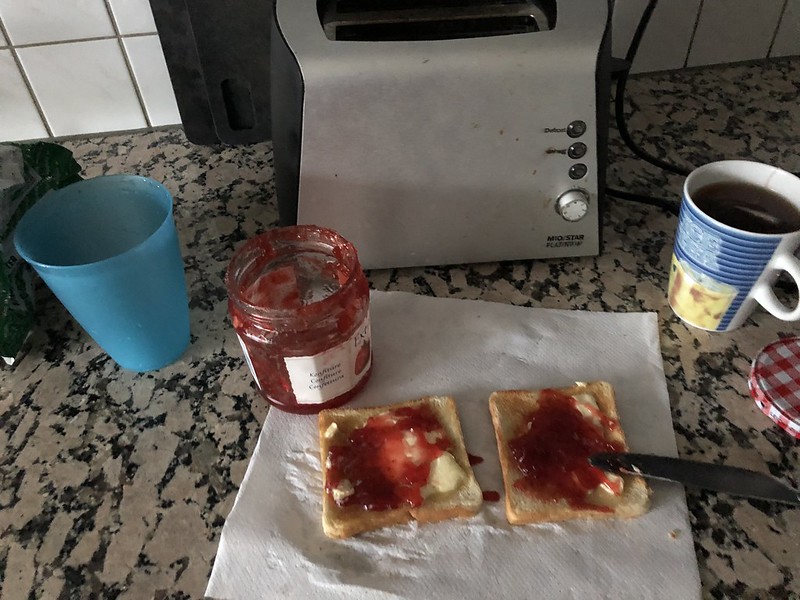 In spite of my sleep marathon yesterday I still slept well through the last night. Eventually I dragged myself to the kitchen to fire up the computer this morning and let some light and air into the home by opening the blinds. The second priority was my frugal breakfast. I did some cunning planning yesterday when shopping. We had a toast Hawaii yesterday evening and there is enough toast left for a couple of days, which I had planned for my breakfast.  It is all a matter of logistics. 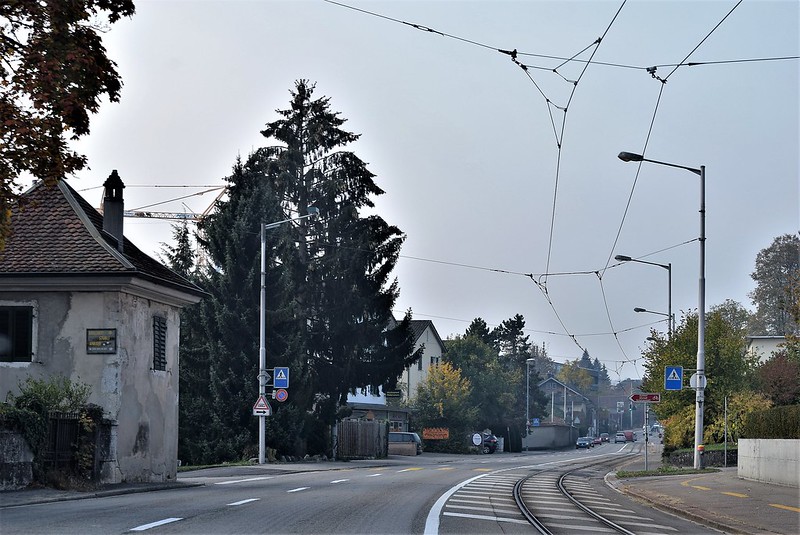 I did take a few photos on the journey to the supermarket yesterday, but same places and time. This is the main road as we leave the village. Not very much traffic. Since we have motorways, it is only really used for local excursions, like to the village where the largest supermarket is. If you carrying on straight ahead you arrive at the local town of Solothurn. I usually take the path on the right when wheeling along to get there. The left side is practically useless as now and again the sidewalk disappears and I am not wheeling on the main road. We have a local train that also uses it. 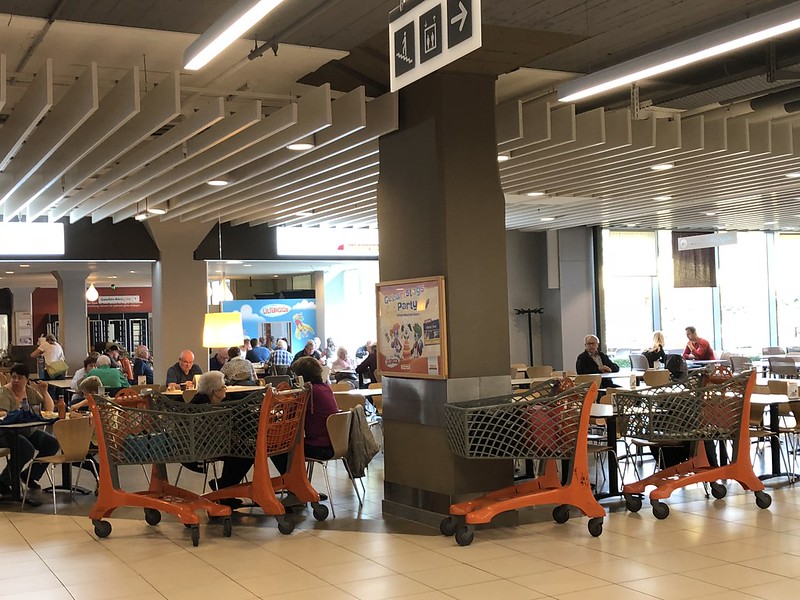 I also took a photo of the restaurant in the supermarket. Part of it had been closed for two days as it was being renovated, although no big deal. They had installed a new wooden floor and it had new furniture.  When I was a working woman, I would eat my lunch here as it was not far from where I worked and I could combine it with the daily shopping in the store. Amazing the timetable I had in those days. I even fitted some housework in at home. 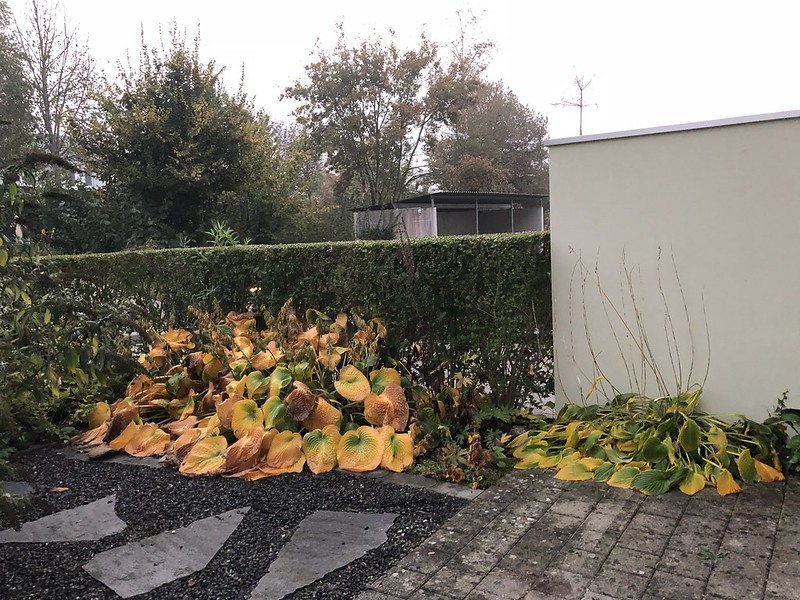 It has become a customs to let the cat out in the front garden when I open the windows in the morning so I took the opportunity of a photo for my hostas, which are now getting in the Autumn mood. They will all turn yellow and eventually shrivel. That is when you can just pull out the leaves and throw them. Next year in Spring they will arrive again. That is what I like about hostas, no big deal with work. In the meanwhile Tabby, my cat, decided to re-enter the appartment. She likes to have an inspection in the morning. It has become a habit, and I can afterwards close the window again.

Enough of my exciting Saturday morning, I now have a tour to do with a few household machines, you know, the usual. Mr. Swiss will again leave me for a short safari in the supermarket. It is Saturday I noticed on the calendar (I have to check now and again being a golden oldie) so enjoy the week-end, take it easy and if you have to work today, enjoy the free day you get as compensation, although some of us get no free days (thinking of the housewives and mothers).

I will leave you with a photo of last year’s poinsettia. I left it outside during the summer. It developed smaller leaves, probably too much sun. Now it is recovering and still growing, but I do not think it will get the nice red leaves again that it had when I bought it last year. 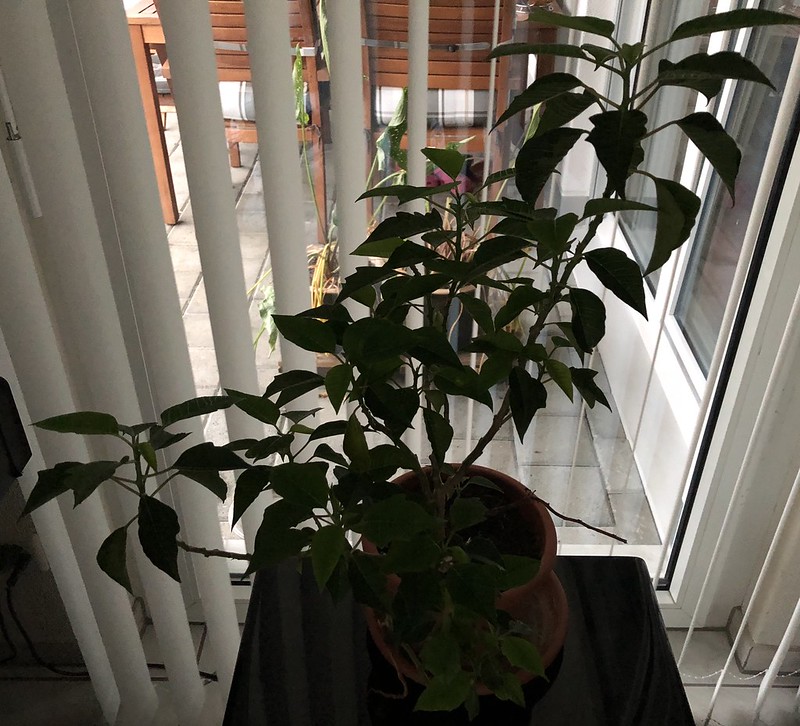