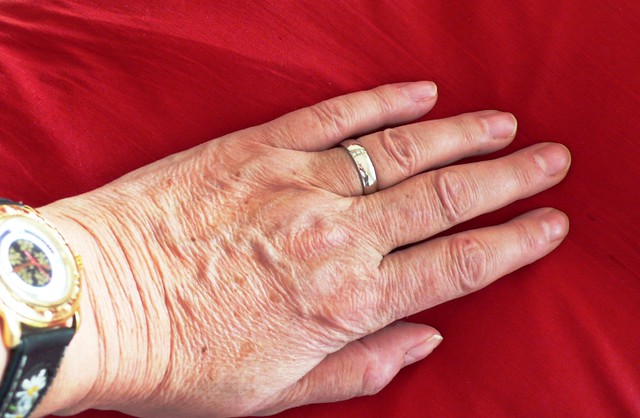 I am one of the few people that had to have their wedding ring removed under anaesthetic. When Mr. Swiss and I decided to take the plunge almost 50 years ago, he reminded me that I should actually have a wedding ring. Money was a little scarce in those days. When you marry someone that already has two kids, aged 6 and 7, then you are not actually rolling in money. I remember we went to a jeweller shop in the town of Biel and I chose a plain gold band, just like my mum had. Mr. Swiss decided he did not want one, and that was OK with me. My dad never had a wedding ring. It is a bit of a custom in Switzerland, perhaps in other countries as well, to have your ring engraved with the name of your husband and date of marriage. It was not done so much in England at the time and we wanted to get married and not have an engraving session.

Now we can turn the clock onwards to about 40 years later. I was in London visiting my dad and my No. 1 son was with me. Mr. Swiss was in Switzerland and we only had contact by phone. I remember one evening my old schoolfriend and I went for a walk in the new docklands of London. I was staying with my friend in London at her house with my son. We decided to walk over Tower Bridge and then it happened.  I still do not know how today. I must have tripped, fell, and saved my head by automatically placing my arm beneath it. Unfortunately I did not save my arm and it broke in two clean pieces at the elbow. Luckily my friend had her car and she said we must go to the hospital. I told her I want to go to the nearest hospital to where she lives, so we went on a half hour journey through London from Tower Bridge to Hornchurch in the car, me with an arm with two parts of a bone rubbing together.

We arrived at the hospital and my broken arm was diagnosed within an hour and I became a patient. The next day I was operated, an they told me the wedding ring must be removed. I asked how. Since 40 years it had never left my finger and the finger had actually expanded around the ring. I was sure the bone had grown as well. There was no way that ring would come off my finger. The nurse tried, I think three nurses tried, but no success. I was past caring and they wheeled me off to the operation with the ring still on my finger. When I woke from the operation I noticed I now had a silk band around my neck, and yes the wedding ring was hanging on it. I also had some suspicious black and blue markings  on my ring finger. And that is how they removed my ring under anaesthetic.

I was released from hospital a day later and the day afterwards flew back to London with my son. My schoolfriend had been looking after him in the meanwhile. At one point Mr. Swiss called because he had heard nothing from me for a couple of days. My friend had the delightful job to inform him that I was in hospital with a broken arm. I told her not to phone him with the news. I did not want to worry him.

I no longer had a wedding ring on my finger, I was free wild, on the market again. After a further 5 years Mr. Swiss decided this state of affairs could not continue and one day he was measuring my finger with a strip of paper, not saying why, although I had guessed. It was around my birthday and yes, he had bought a new ring, this time even with a small stone in it. It was engraved with his name and date of our wedding and I am still wearing  it today. I can even remove it if I want to, although I noticed that either my finger is expanding slowly in width, or the ring has got smaller, probably by washing. The photo is of my hand (with the normal golden oldie markings and wrinkles) and the ring.