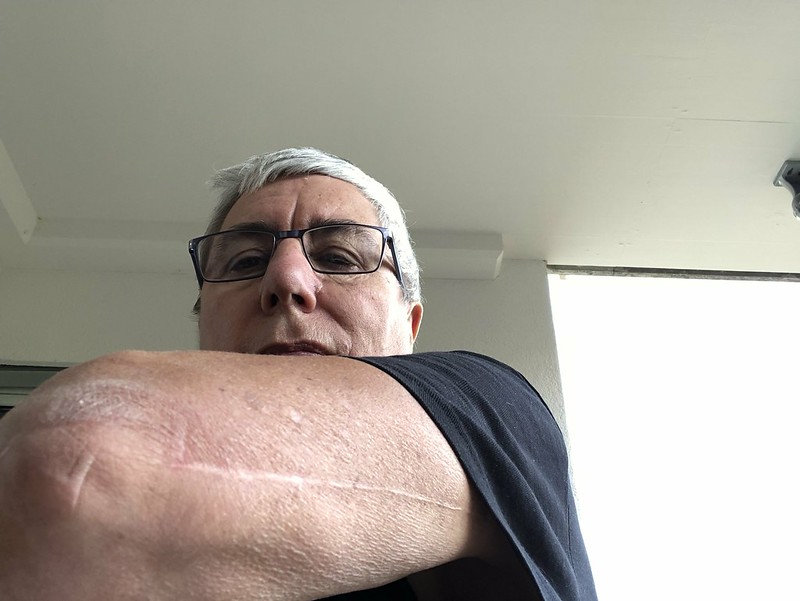 The things I do for a prompt. This photo is the result of a selfie I made to show the scar on the top half of my left arm after one of my famous stumbles and fall. Selfies are never good. I was even trying to smile on this one.

Beneath the scar there is a metal plate with 15 screws to hold the bone together. The bone did not just break, it did a compound fracture which means it was more than two pieces afterwards. The surgeon who pieced it together did a good job, he must have a talent for doing jigsaw puzzles.

How did it happen? I had been retired from my job and was an official golden oldie for 2 months. My son was even on a visit and it was the day he was to return to Belgium where he was working at the time. We had eaten lunch and my blind cat decided to take a walk on the porch where I was reclining in a chair. My cat always wore an expandable dog lead outside which we hooked onto a post so that he could take a walk without getting lost. I left my chair for some reason, tripped over the dog lead and had a “lucky” fall. It was lucky because the door to our garden cupboard managed to break the impact before the concrete ground came up and hit me.

The next step was organising an ambulance to take me to the hospital. It was just at the time when my son was going to depart and he said he would stay. I said no, he could not do anything to heal my problems and we sent him off back to work in Belgium. I went for my first drive in an ambulance on my own as I told Mr. Swiss to see to things at home. I had enough people in the hospital to look after me. And so I was x-rayed and put in a hospital bed and operated, but only the next morning. After a week in hospital they sent me home and with time it also healed up. I got another interesting scar at the top of my arm.

I already had one at the bottom part of the same arm after falling on Tower Bridge in London when I was spending a week there visiting my dad.  If you are going to fall, then make sure you do it in an interesting place. I now have a bionic arm, although they removed the steel from my elbow some time ago as it was not behaving. That was a straight forward break, nothing compounding. 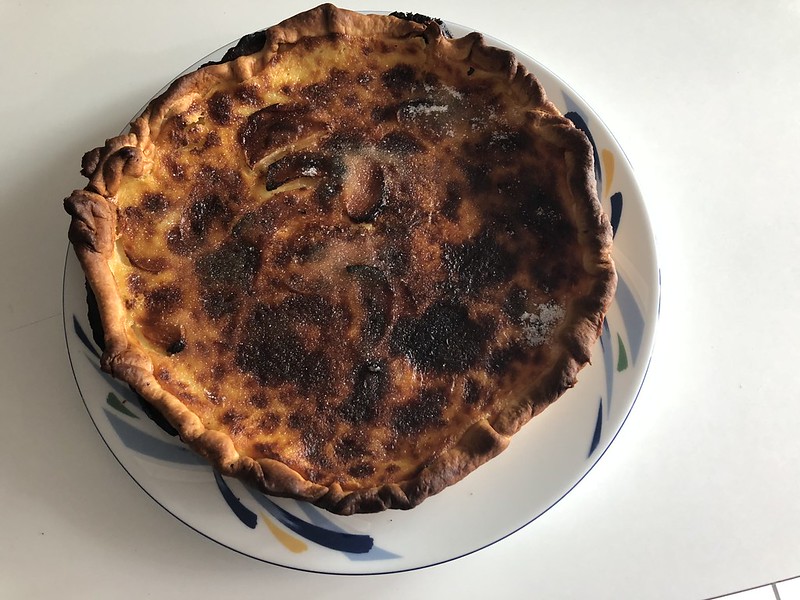 In the meanwhile the sequela of my apple tree is now making itself known. Whilst I was on a wheelie this afternoon in my chair, Mr. Swiss baked one of his famous Swiss apple flans, to his own secret recipe. What could be better?