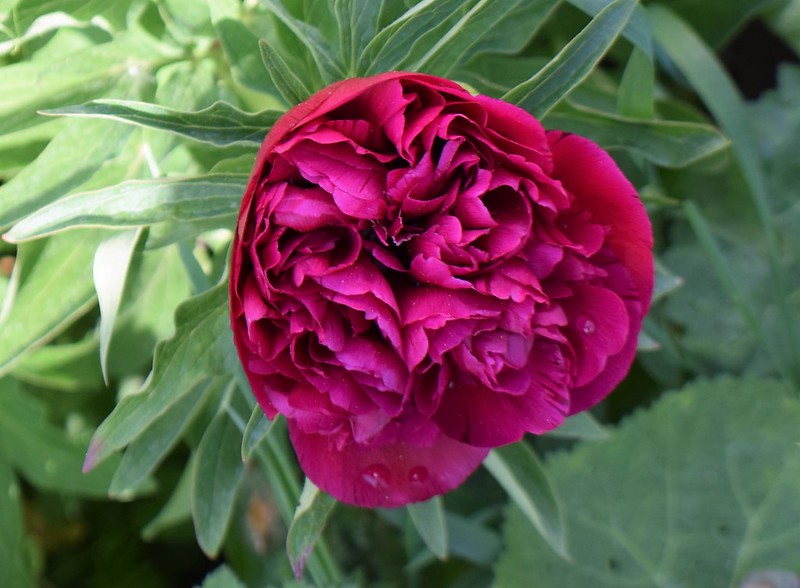 Fresh from the bud and still a little tight, some time last May. It is now seed in my garden. 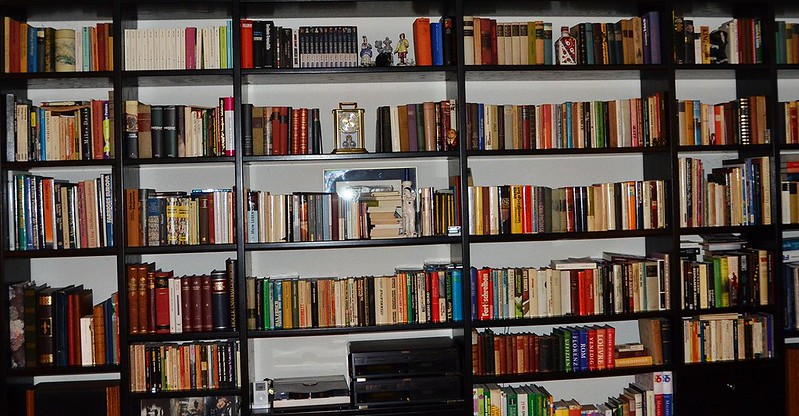 When Mr. Swiss met Mrs. Anglo they decided to get together
They discovered they had a lot in common and they were birds of a feather
He read german, she read english, they were just the details
They swallowed every word and meaning without going off the rails
They moved together in their nest, there were bookshelves everywhere
Reading was their favourite pastime but their books they could not share
It was a very copious hobby, they even had books in the kitchen
That was not a very big problem, by cooking they did both pitch in
Whilst she had the books in english language, he had in German the same
And so everything was twice as much, this really was no game
As time went past and the years grew on the Kindle was on the scene
At last the 10 bookshelves could be reduced to something very clean
But Mrs. Angloswiss now spoke german and began to read the German book
Mr Swiss also read english, and were now both off the hook
They now had space in their book paradise, and so they had some kids
Although in the evening they still read their books, before closing their eyelids
Shakespeare became an english Goethe and Charles Dickens was Thomas Mann
They both read Gunther Grass as well, they had it in the can
Books are everywhere to be had, just upload them in a jiffy
In German or in the kings english, both were not so squiffy
And now they swop their Kindles often, it is all the written word
Makes no difference in which language, they are both a reading nerd 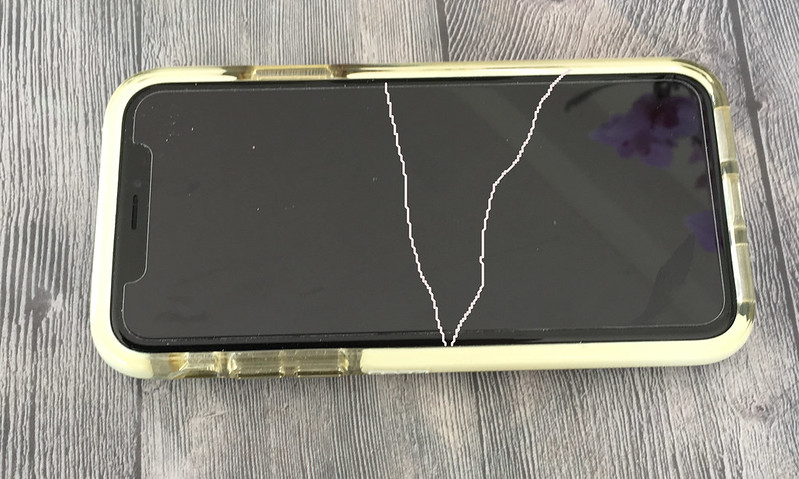 This is my iPhone X. It is more than a phone, it is my life. I very rarely make a telephone call, just family and very rarely does anyone call me – also mostly family. But I have my shopping list on it, connected to Mr. Swiss by cloud so that we both know what we have to buy in the supermarket. There is no point when two golden oldies wander around searching the shelves for what is needed and eventually standing at the cash desk with twice of everything. If I buy it I cancel it from the list and so it disappears from Mr. Swiss list and vice versa. We are eternally making new entries on the list at home which we both have. Yes, we are two cyber golden oldies. Conversation between us has almost become superfluous. Why waste words when you both have an iPhone, although his is not as flashy as mine.

I have my doctor appointments on the phone, I have a list of books I want to download on my Kindle, I have names of new people I meet in case I forget them and I even have the instructions for operating our dishwasher: such are the problems of a golden oldie with memory lapse.

My iPhone X was not cheap and so I invested a little extra for an extra protection on the back and a an extra transparent cover at the front. These telephones tend to be accident prone. About two months ago I notice that there was a minute piece of edge missing on the top protection which developed into a line and another line joined it from another missing edge piece forming three pieces which could become quite fragile. Of course these things can happen, especially if you have a stone tile floor at home and so I went to the shop and had the top part replaced: cost Swiss Francs 40.00 which was not cheap. Last week, oh horror, I detected a new crack in my new top layer. I was going to wait, but decided it would be better to have it replaced. 40 Swiss francs later the job was done. Of course if I did not have the added protection it would have been the telephone.

I asked the guy at the shop if there would be a nice comfortable soft case lined with foam rubber to protect my phone when falling on our stone floor. He said there was, but because of the size of my telephone due to the front  and particularly the back protection, he did not have one large enough. I am now searching in the Apple shop online for something suitable.

I have now read that Apple are introducing a new iPhone model, even bigger than the one I have. They should make them out of armoured bullet proof glass for Angloswiss protection. 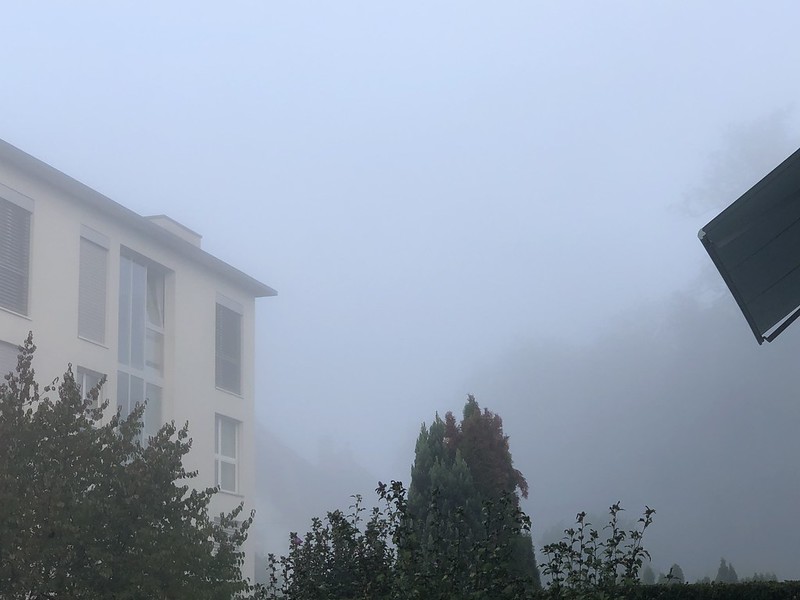 A typical Autumn morning with some mist but now the sun is shining, so it will be a good day, cool but bearable. We are getting some pleasant weather currently and according to predictions it will stay until the end of the week.

I took a wheelie into town with my chair yesterday afternoon. On Sunday it is a place for afternoon walks or tourists that arrive on the local train and taking photos everywhere usually with their phone cameras. 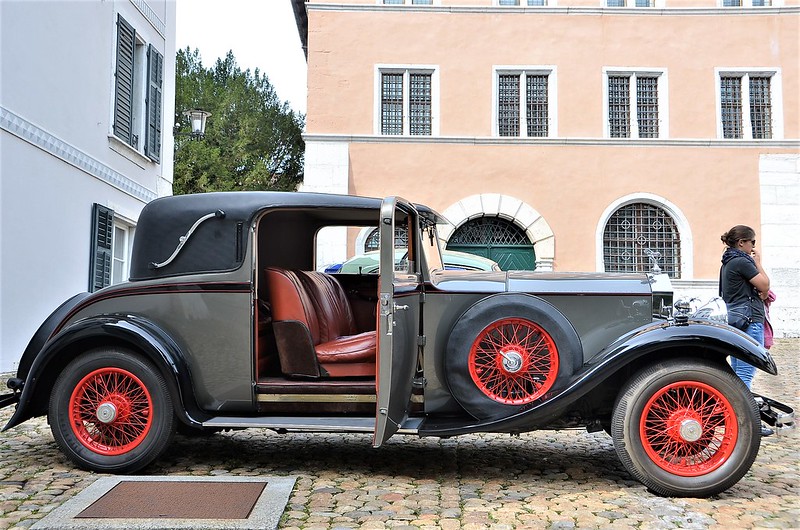 As I entered the town, the first building I see is the old arsenal which now serves as a museum for old Swiss weapons and suits of armour. In front of it I saw this wonderful example of an old Rolls Royce. Actually there was a row of old cars parked there, not all veterans, but this Rolls really impressed me. 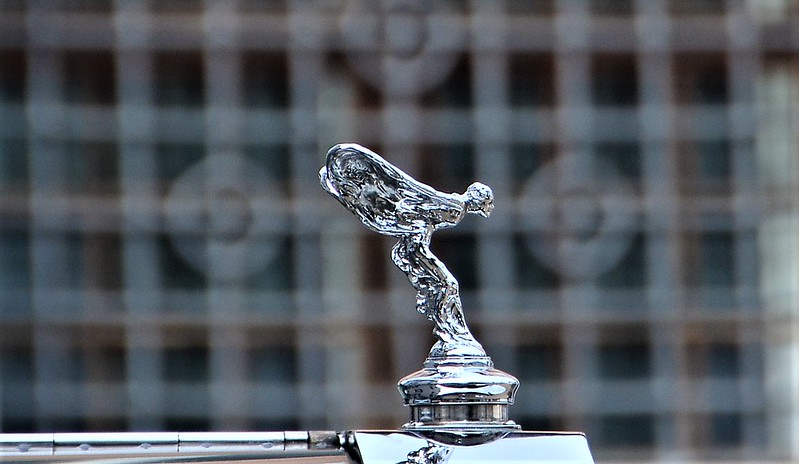 As Mr. Swiss is not longer able to go for long walks due to back problems, I am his sort of eyes to keep him informed about what it going on and so I took a few photos. The lady on the Rolls has not changed in years and still looks good. 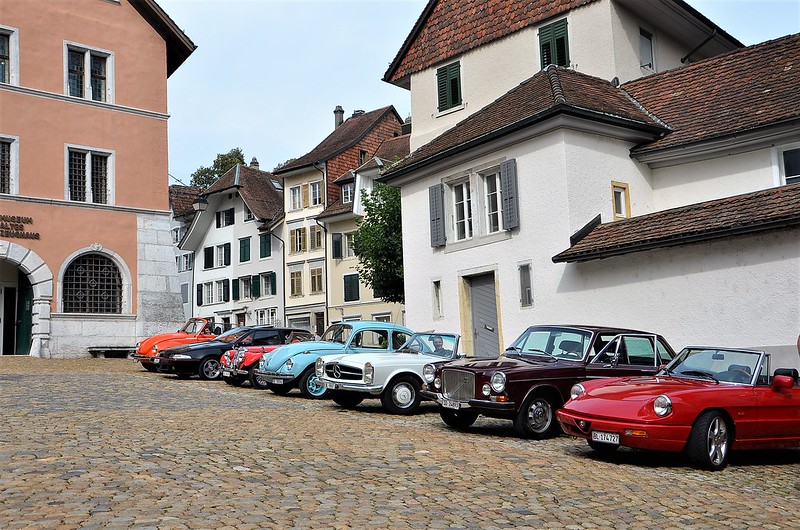 These are the other cars. I am sure the experts will recognise a few: not all so old, but not something you often see on the roads today. I wheeled on and hear the noise of motors being revved up as they left town and travelled further. It seems to be a sort of travelling Sunday afternoon thing. 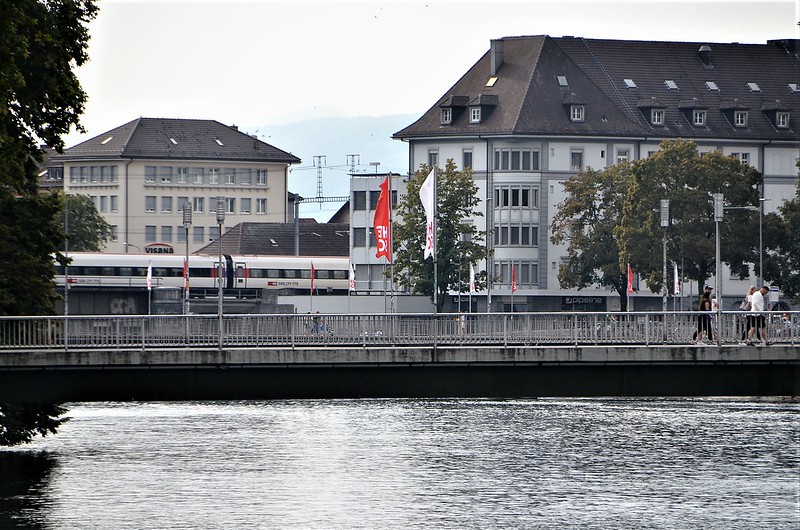 As I was crossing one of our bridges I could hear the sound of a train passing over our railway bridge, which is the main connection Zürich-Geneva. The other bridge is the Wengi Bridge, named after Nilaus Wengi who was a Swiss politician in the 15th century and apparently a bit of a hero, by standing in front of a canon in one of the local wars, although I do not know all the details. He seems to have been a local guy. I think all the names of local architecture in our town are named after past historical figures. This bridge no longer has general traffic, only the bus is allowed to use it. 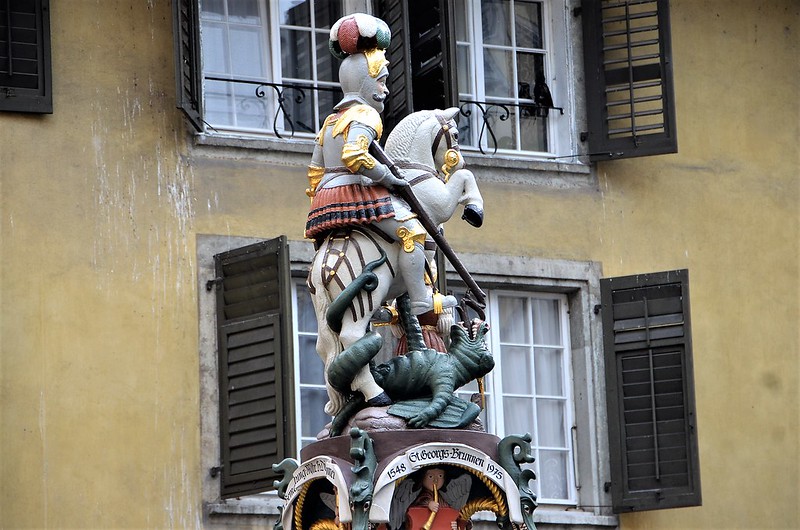 This statue is more internationally known, as it is St. George with a dying dragon at his feet perched on a fountain in our town of Solothurn. How he got there I do not know, we have more cows than dragons in our area. 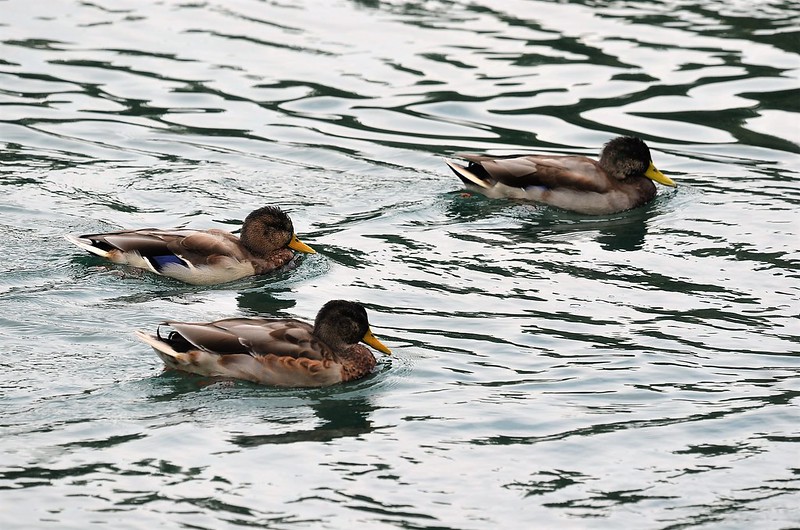 As I wheeled on home along the river bank yesterday I saw a troop of ducks  swimming along on the river. At first I thought they were mallards, but at second look they seemed to be something else. I just wonder where all these ducks come from. There are also swans here and there, and the thing is the different species of ducks never fight. They just swim along, the families keeping together. The chicks born in Spring are now ducklings and still remain with the family, a wonderful sight.

And now to Monday daily life. I have shopping to do and will again be on a safari to the local supermarket after housewifing in the apartment. I have already heard one ambulance sounding its horn this morning as it drove through our village, but I hear one almost every morning lately. I do not know what the day will hold, and I am not sure if I am going anywhere. It looks like it will just be supermarket photos today. 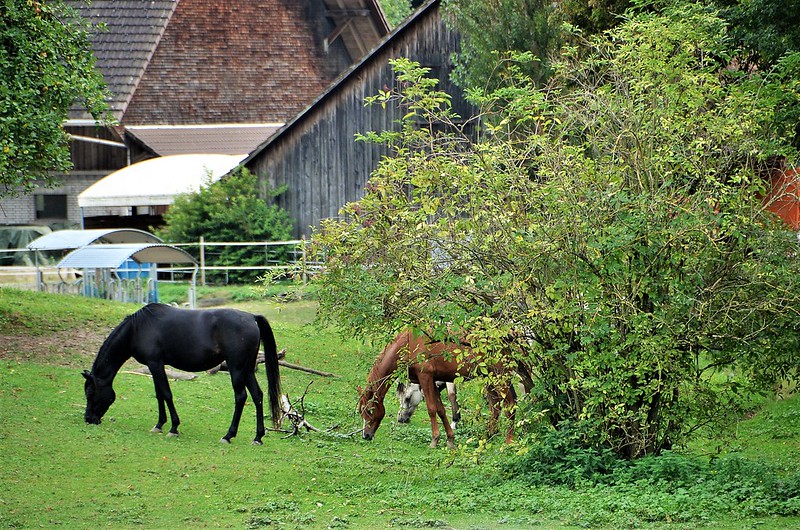 Some horses grazing in a field on the way.