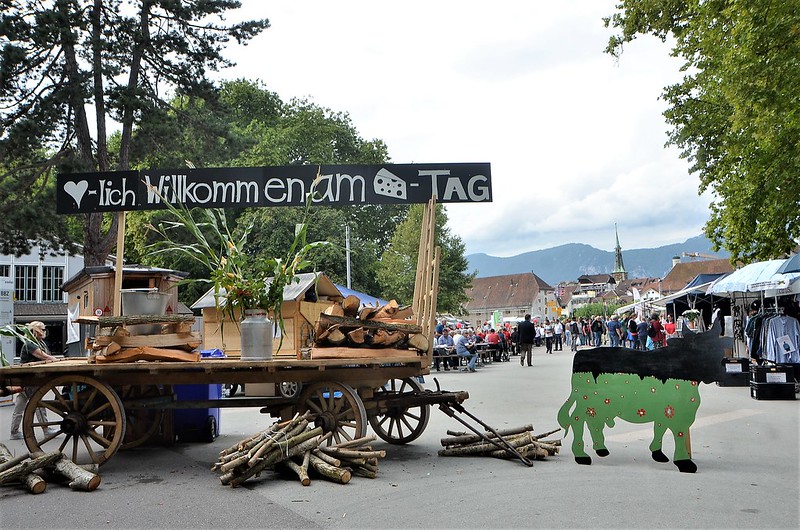 And welcome to the Solothurn Cheese Day, yes at last there was some action in our local town and your blogger in Switzerland was there in her wheelchair to take a few photos. This cheese day has been for the past few years, but in my more walking days, I never bothered to have a look. Those were the days when Mr. Swiss and I did things together, but since he has back problems and I have my MS  we do our own thing. I suppose I am the mobile one, and now at every opportunity I am on my way for something new.

I had no idea what this cheese thing was about, but I soon found out. 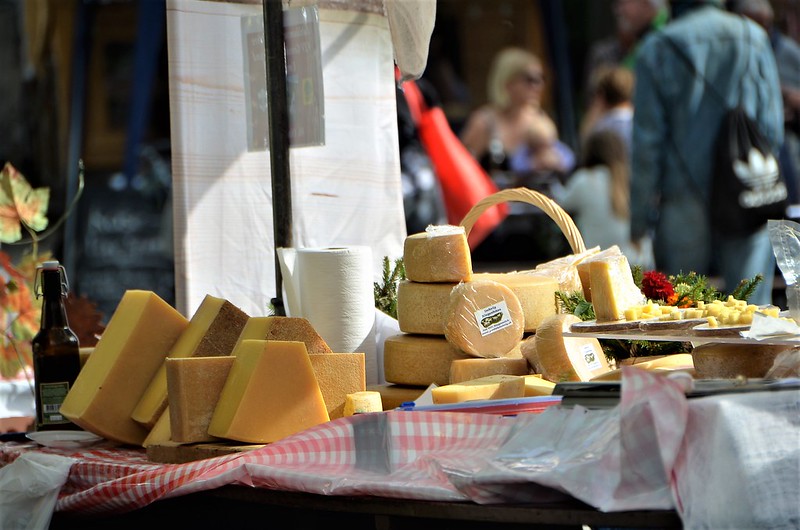 The first part was a market where various farming cheese organisations presented their goods. Mostly local, but as far as Kanton Bern. I must say I was a bit apprehensive of moving in crowds with the wheelchair, it was the first time, but everyone was very polite and it was not such a crowd. Of course it is a good opportunity to meet a few friends here and there. 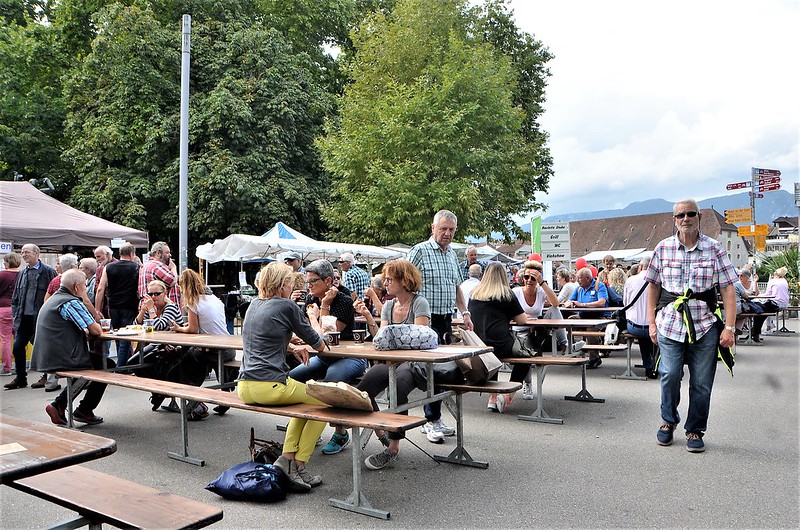 It was something like an enlarged monthly market, but concentrated on milk products (and beer) and of course there were the usual street opportunities for a drink taking it easy. A colleague I met said that the action was on our local Dornacherplatz (Dornach Square) where they had the cows and they were being distinguished for their various merits: a good udder, good shape, Zitze (I am still working that one out, but something female) and all sorts of personal details of a cow. They had made the area quite easy to manoever, so there I was on my way to the cows. 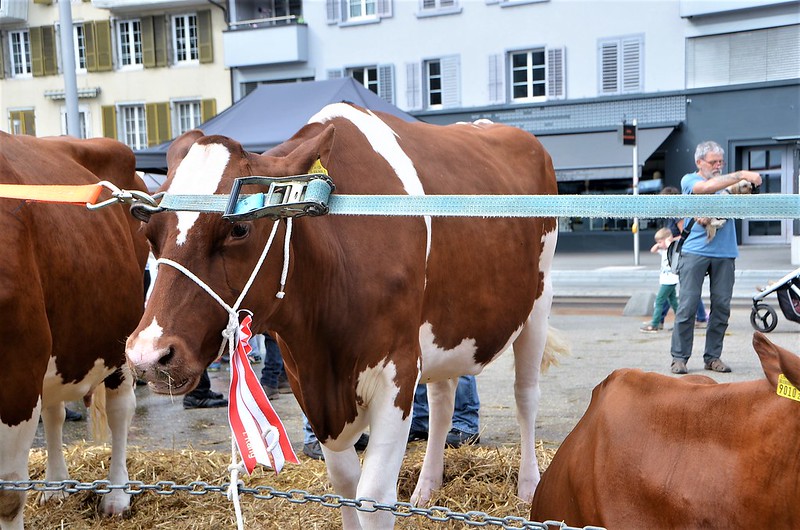 This one was already proudly showing his badge of honour which seemed to be first class. OK, I am no expert, but I assume it had everything in the right place. There was even a guy with a microphone telling who had won what, and mentioning the local cowboys that had the cows on their farms. I took so many photos that it is unfortunately not possible to show them all today, but I will be back. 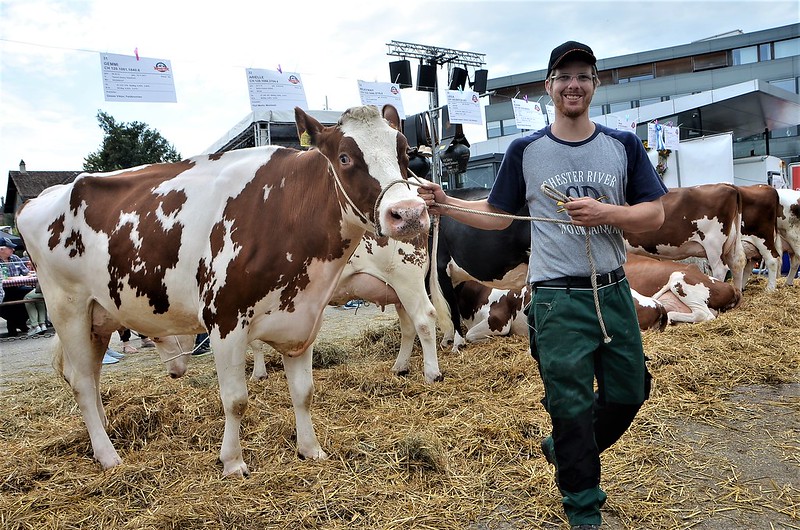 This guy even posed for me with his pet cow. There was a bit of everything to see. 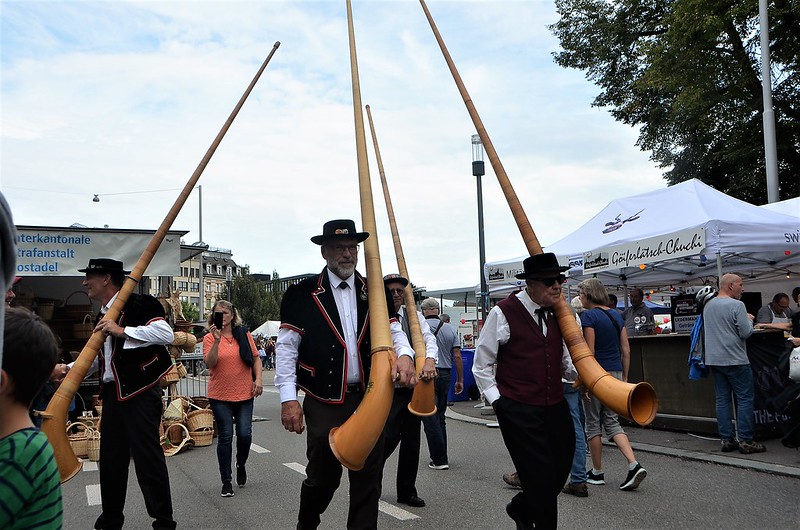 And suddenly this groups walked past. Nothing like Swiss alp horns on a country festival. For me as a Brit it was really super and very impressive, but after all I suppose I am still a tourist in this country. 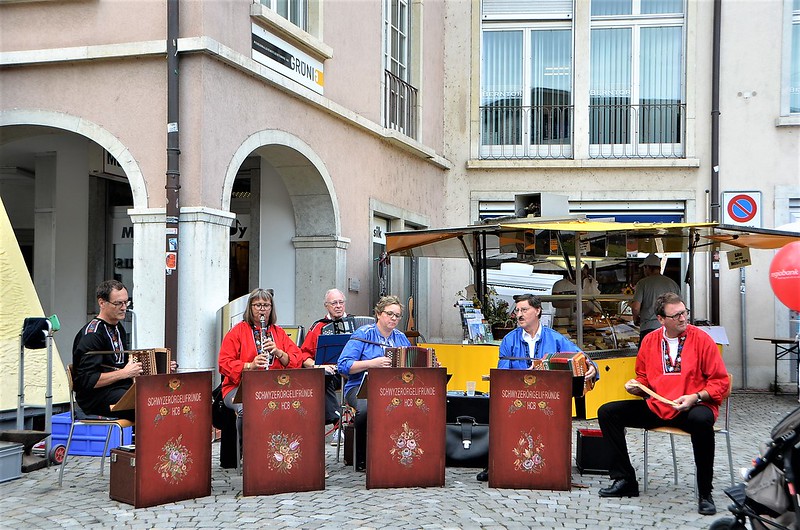 Of course there were a few music groups scattered around. I eventually made my way home after an afternoon with a difference. This was only for a day and I suppose you cannot keep the cows tethered in the town for longer, the prefer grass to paving stones. In the morning there was a real Alp procession, but I only saw the photo in the newspaper. I will probably be back with some more photos over the week-end. I decided marrying a farmer would not have been such a bad thing after all. Even cows have their charm.

And now I must move on, life goes on as usual, despite cowboys and markets. I have a week-end shopping to complete and this afternoon I have an appointment with my hairdresser, about time too. I am beginning to look like a Beatle refugee.

See you around so enjoy the day until later. One last photo of the organ grinder at the festival. 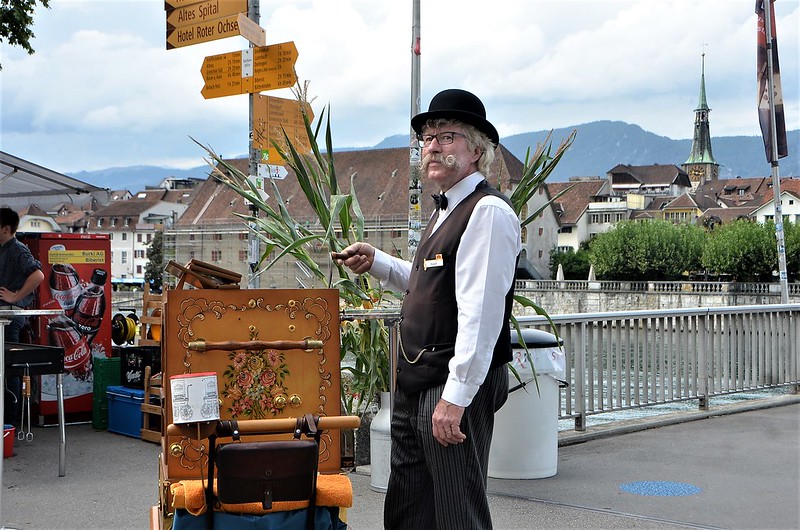