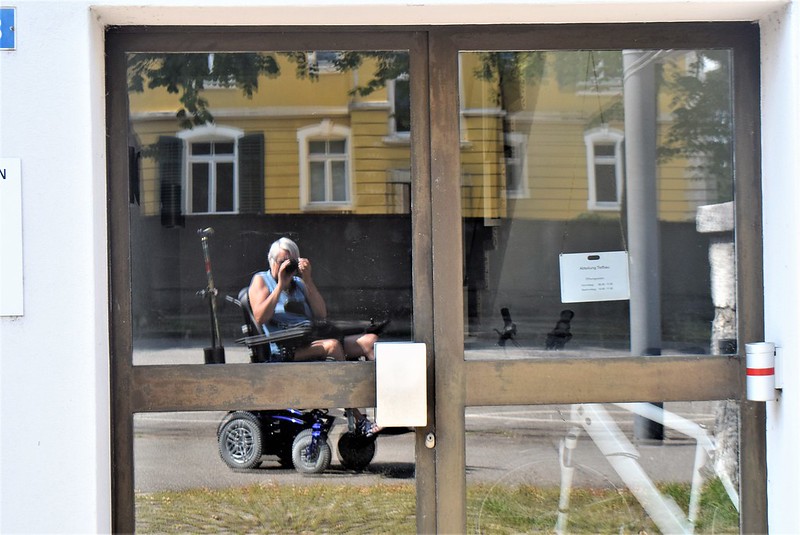 Between Christmas and New Year my electric wheelchair arrived. I had to wait a month until it was constructed according to my needs, although it was my first wheelchair, and who really needs one. I was diagnosed with MS last year, a bit late as it was probably hanging around for at least 20 years before, but you do not think about these things. I could never ride a bicycle and otherwise always had problems about sorting right and left and balance, but this is now all history. I have it and so I have to get on with it.

Now handling a wheelchair, especially electric, is something to be learnt. My first expeditions were in the area where I live, a nice little village in the wilds of Switzerland where the hedgehogs and cows say goodnight to each other. I was travelling the paths that their little feet and big hooves had often trod. Thank goodness the cows are mainly kept behind the electric fence and the hedgehogs only really come out around midnight.

I was surprised that I did not have to pass some sort of driving test with the wheelchair. There is a little knob on the arm rest to move forward and back according to which direction you are going, even right and left. I can even tilt the seat backwards, which is very handy especially when going up and down slopes. We do not want to fall out of the chair. Never attempt to go down a kerb or up on a slant: always do it straight ahead, otherwise you might tip the chair. I took a few photos of various crossings before I actually ventured forth with the wheelchair and marked them as being easy, not so easy and downright */–&** (you know what I mean). I also noticed that I could turn my chair in a circle on the spot – very handy if going in the wrong direction.

It was only last month that I attempted my first ride on the highway to town, actually on the sidewalk. My chair is not permitted for road surfaces, although I often take them in the village and sometimes in town when it is traffic free. Pedestrian laws are to be applied to my mobility, as faster that 10 kilometers per hour is not possible, although when it is fully charged I can even get to the local mountain. I am still thinking about that one.

And so I am on my way on the highway to wherever my wheelchair manages to get me. I am armed with my walking stick in a holder (you never know) and my mobile telephone to call Mr. Swiss if I get in a life threatening situation. I notice everyone is very friendly, say hello to me and sometimes I do get strange looks when I unpack my camera lens. Wheelchairs are ideal if your hobby is photography. I used to have to carry it all with me. Now I sit comfortably in the chair, bag slung around my shoulder with my heavyweight Nikon 7000 camera and two spare lens, one being a zoom. Being footfolk I could never realise such a feat of weightlifting and had to be satisfied with one camera with its lens, anything more was too complicated.

Of course having MS is not exactly what you want, but I say make the most of what you have and those wheelchairs can be quite speed machines. I have 3 gears on my chair and sometimes have to be careful not to get a speeding ticket. I am now a golden oldie with my 71 years, and plan on a few interesting photo safaris for the future.

I am now on the highway to freedom, after being restricted to home life until it arrived and depending on Mr. Swiss and the car. I am still allowed to drive as it is my left leg that has decided to detach itself from my body and who needs a left leg or foot when you have an automatic car. So clear the roads, make way, the Lone Ranger with her wheelchair is on the way, and I do not need a mask: everyone seems to know me.

6 thoughts on “FOWC with Fandango – Highway”