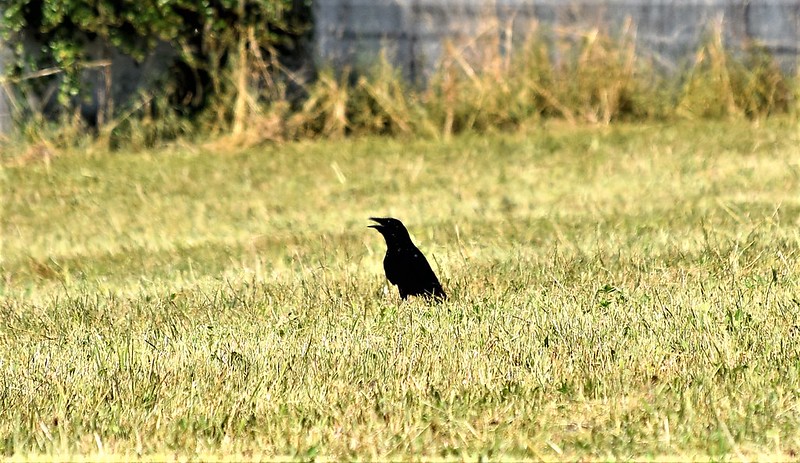 I am not really a great poetical person, but I have a few favourite poems and one is “The Raven” by Edgar Allen Poe. I did not have a photo of a raven, but a crow.

Anyhow this is my feeble attempt on a sort of parody, “The Cat”

And the noise of meows and permanent clawing
Did not  thrill me, but became a bore
It was annoying, I wanted to sleep, so I shouted
Go away from my bedroom door
it was only the cat wanting to enter
He was annoying, but nothing more

And I really got so angry and lost my patience all the more
“Tabby” I said, You are annoying and so I implore
To stop this scratching as you are rapping
I do not like scratching at my bedroom door
And then I got up because I heard her and made the mistake to open the door
There was daylight, two shining green eyes, you think that was all and nothing more

Gazing into the daylight very bright, I stood there cursing and knew no bounds
Perplexed and cursing the worst of words it was a deeper growl
But it was still and there was no signal
The only word spoken was a plaintiff meow
I return the noise with a loud meow
This was all and nothing more

Back to the bed, tired and angry
I heard the meow much louder than before
“I will kill that cat” I said to myself “she really thinks she owns the place”
I venture out to see where she was and to discover what she thought was law
I grabbed my cane to show her the door
But it was the wind and nothing more

I threw open the window and bolted it sound,
when, many a curse and noise was made
The cat walked in, quite proud and did not implore
She owns the place, she established her claim
She scratched once more my bedroom door
just sitting there and nothing more

This tabby cat put a smile on my face
When she stared at me and put down her paw
“There will be no tuna fish today” I said “ you are not in charge here
Awakening me you tabby cat from your nightly rambles
What do you think you are doing, do you want a war
And then she said “Dom’t be a bore”.

I must say I admired her courage and impertinence
Although it did not impress me more
You just have to love them, even if only a cat
That wants to enter your bedroom door
A cat with nine lives scratching upon the bedroom door
She said my name is Tabby for evermore.

But the cat staring constantly at me spoke one word
Just one, it’s voice it did outpour
Nothing more and nothing less – not a whisker did she move
But I told her “You have been here before”
In five minutes you will be gone so make sure you obey my law
And then the cat said “don’t be a bore”.

Astonished at my words I had spoken
I told the cat it was my law
She must pay attention, I know no mercy.
So she hissed and scratched, just another growl more
The noise was piercing and it resembled a saw
I put my foot down and said – nevermore

But the cat, she was still staring
Ducked as I thew the cushion at her and she hid behind the door
Then she decided to curl up on the fabric,
oh this is a cat of annoying paw
With her daring, defying meows, and all the sounds coming from her jaw
She continued to meow “nevermore”.

Then I sat down and thought about it  but no word did leave my lips
to the cat whose eyes were shining straight into my own heart’s core
She was really ready for a fight, but I sat back on my bed where I was now laying watching the cat all the more
Let her do what she wants, she is a bore

Then I noticed the atmosphere denser, perfumed from her breathe of censer
Guided by Bastet her paws were tapping lightly on the bedroom floor
“Tabby go back to your own room and leave me to sleep, your meows are annoying
Take a long cat sleep and stop this scratching on my door
And Tabby answered “nevermore”

“Cat” I said, -“Your are a nuisance, a meowing curse is what you are
I really think you should disappear, how comes you have to be so important
You think you are the boss in my home
And do you best to annoy me always, but now I really must implore
Do you always have to be so selfish, I am really now hating your gore
And the cat just answered “nevermore”

Cat now listen you annoying ball of fur, you are really the feline from hell
But I am sure you do not want to annoy with your scratching on my bedroom door
Just tell me if you really mean it and leave me to rest in all my galore
Is there something you would rather have than your tuna fish
The cat said “No No, tuna fish for evermore”.

And now please go, you are not my friend, I shouted annoyed
Go back to your territory and your feline law
Do not leave a hairball or trace of fur
Just leave me alone outside of my door
Leave me to sleep in peace and quiet, and stop this scratching on my door

And the cat, never fitting, still is sitting
on the threshold of my  bedroom door
Her eyes are now closing and taking a catnap
And the light through the window casts her shadow on the floor
And I am sleeping, relaxing in bed my shadow is also flowing on the floor
And both of us are dreaming – for evermore.

For those that do not know this poem, here is a link The Raven by Edgar Allen Poe