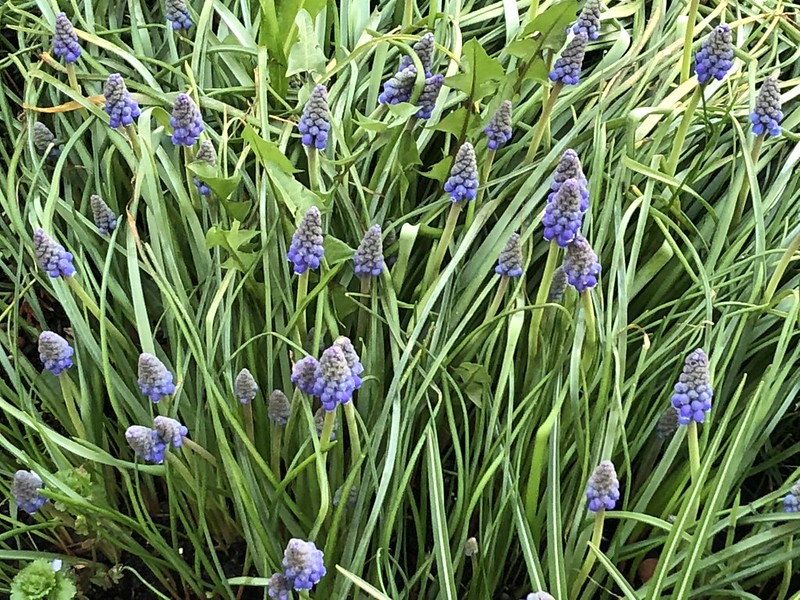 They are mine from the garden and to prove it I still have some seeded remains hanging on, although I do not think that they will be the beginning of new plants. I took the seed photo just now. 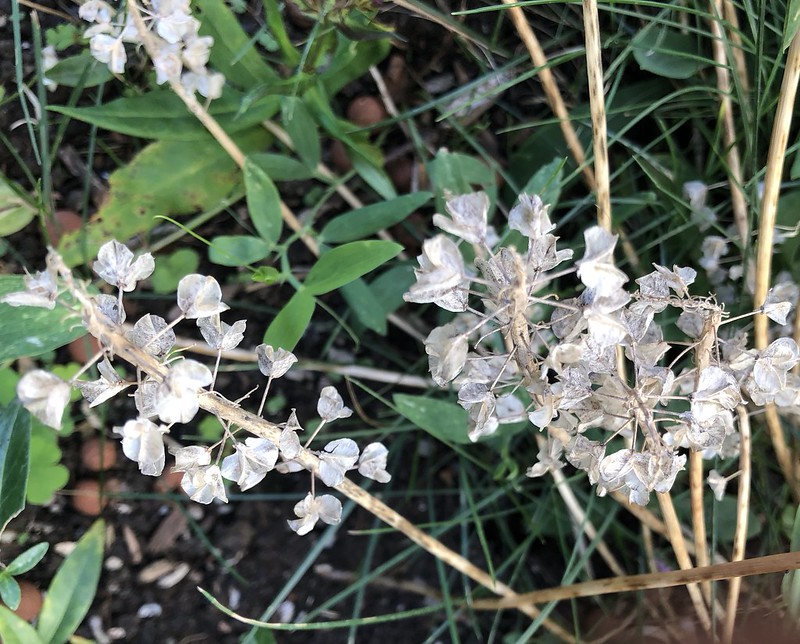 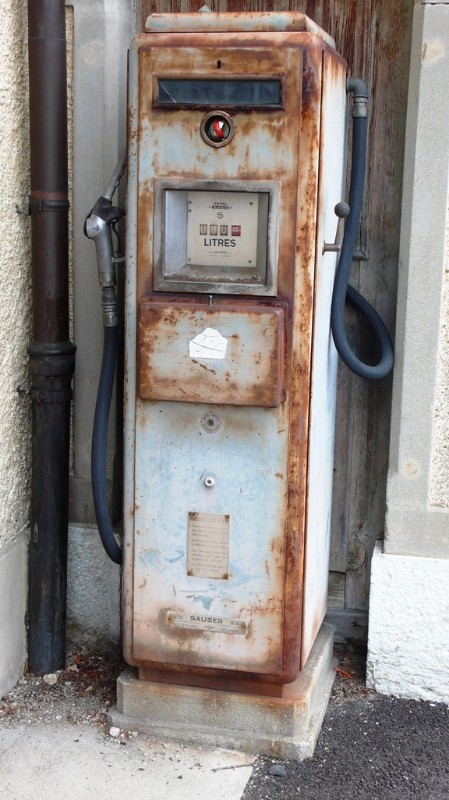 This is not the local garage, but a remainder of an old petrol pump

and it stood at the entrance to the local supermarket in an alcove for many years as a memory of the days gone by. 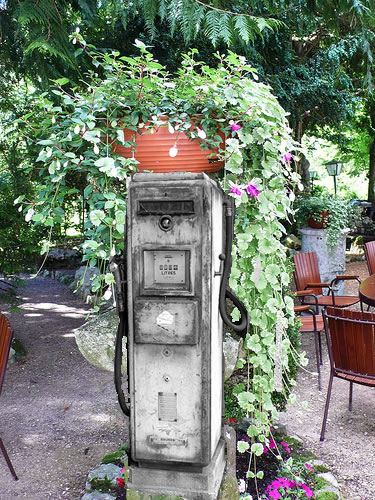 I felt a little sorry for this forgotten petrol pump, so dressed it up a little with some photo shop.

I then realised that I am also becoming vintage with my grey hair and bones that have got rusty over the years. What a shame that there is no photoshop that I could apply to dress me up and rejuvenate myself. 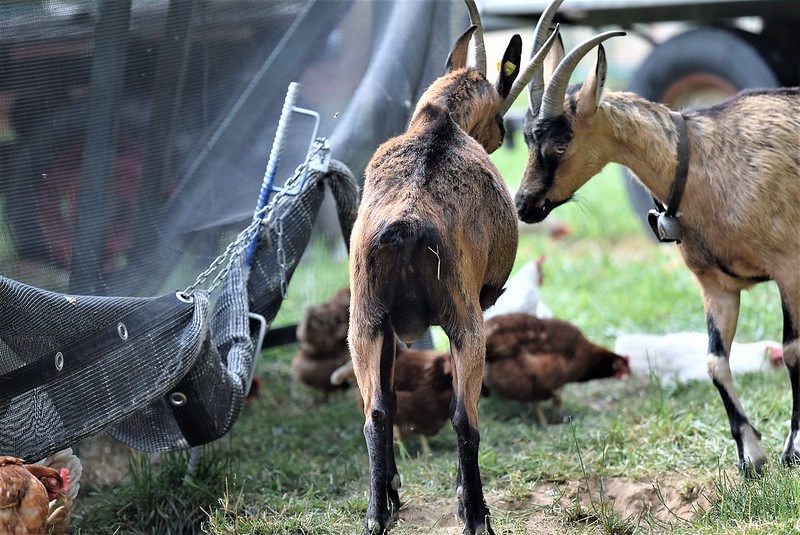 “Of course Gustav, I am no coward.”

“You know the chickens will be watching our every move.”

“Who cares, we are goats, and have no fear. We must have horns for some reason.”

“We do, you know getting the lady’s interested and all that.”

“But there ain’t no ladies here.”

“Shame it is, the farmer said he doesn’t want on that hanky panky in the middle of the chicken run, the rooster might get jealous and two roosters are not the idea, too many eggs breaking and all that.”

“I want a girl Gustav, what is the point of having horns, when you cannot show off with them.”

“We can practice, you know “Hooyah and all that.”

“The new war cry. The human was watching the TV and there were humans kicking balls around, every time one arrived in a big net, he shouted something like “Hooyh”, so it must have a meaning.”

“We don’t kick balls around, just hens and they disappear as soon as the see us coming.”

“Are you going first, or shall I`”

“What is that for a question? We are goats and we both go together. You cannot do a Hooyah on your own.”

“Is the rooster watching. I feel silly when I have a spectator.”

“No he isn’t, said something about fertilising eggs.”

“He is making a lot of noise.”

“That is a rooster Hooyah. Enough of the talk, heads down and let’s do it.” 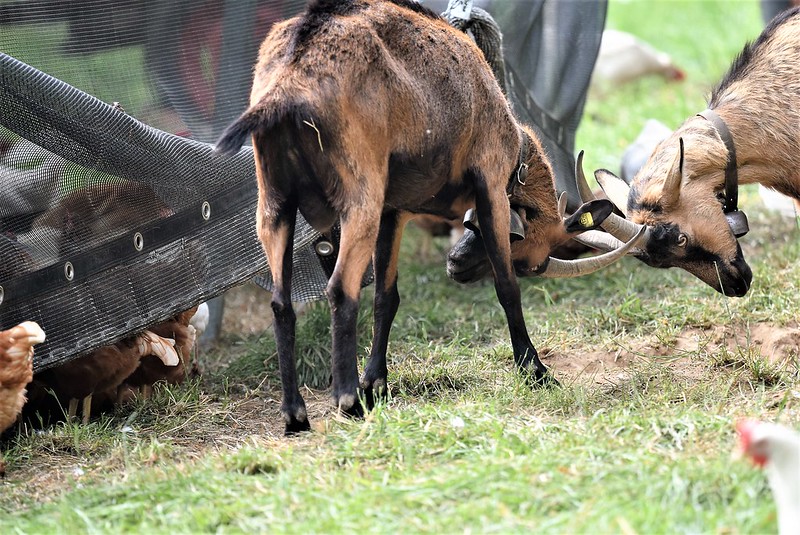 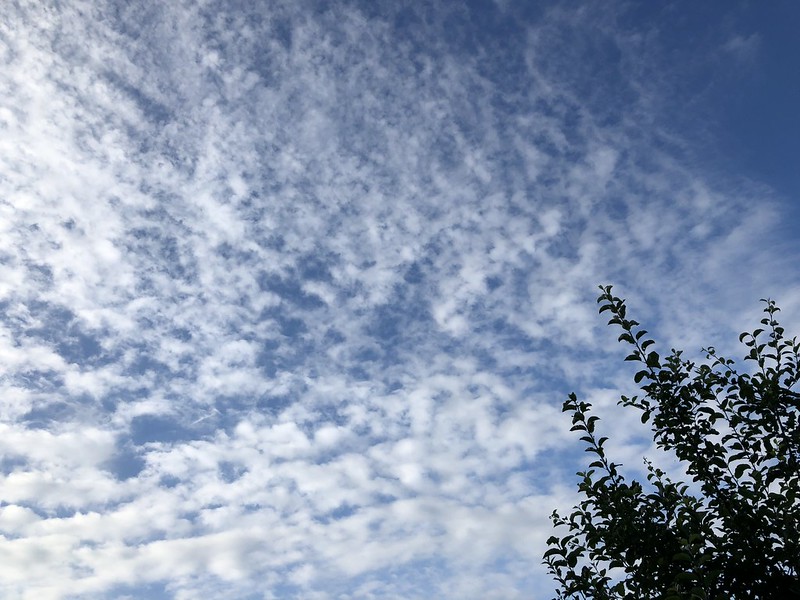 We got a sky this morning and this is what I call a sky. A little cloud action is always good, especially with a blue background. The clouds are just there for some decoration. I should really get my ceiling painted at home with this pattern.

Yesterday was also quite a good day, with a nice fresh breeze and some sun. It got me out in the afternoon for a wheelie in my chair. I did not have big ambitions, so it was a roll through the cemetery on the way past the castle and to the animals. This was the first time I had seen a funeral at the cemetery. They usually hold them in the morning, but it was about three in the afternoon when I wheeled past. It must have been someone well known, as there was quite a crowd. There are many paths in the cemetery so I decided to take the side paths as I did not want to get in the way. However, when I left the burial ground the mourners were leaving as well, so I had to be careful to avoid the many cars. I know the cemetery is basically there for a burial, but I am not used to seeing so many people there. 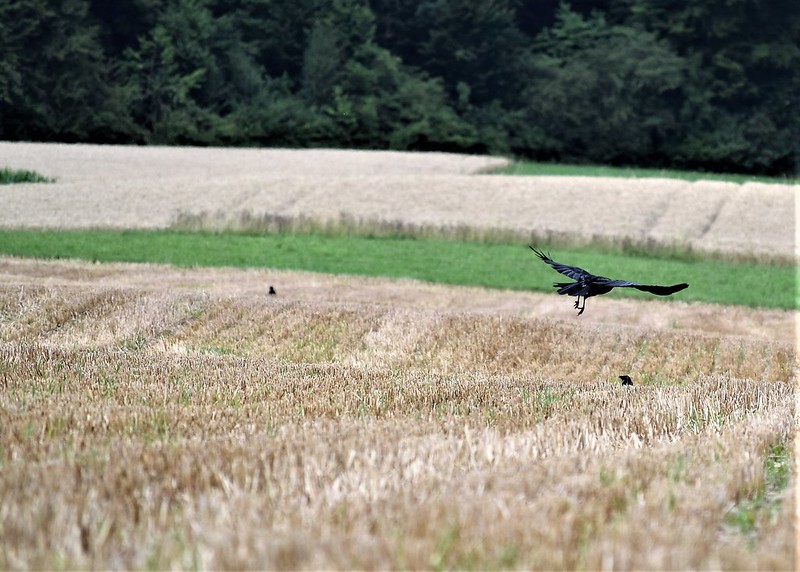 I noticed the crops are now nearing the harvesting stage so the threshers and harvesting machines will soon be arriving. There were a lot of crows around, I chose this photo  because I at last managed to capture one in flight. Actually I waited a while next to the field hoping for a sudden noise of traffic or something to get them all at once into the air for a photo of the day, but nothing happened. They all stayed on the ground doing what crows do in fields.

The cows still seem to be doing the night shift on the fields due to the heat of the day, although I did see one lonely cow yesterday. 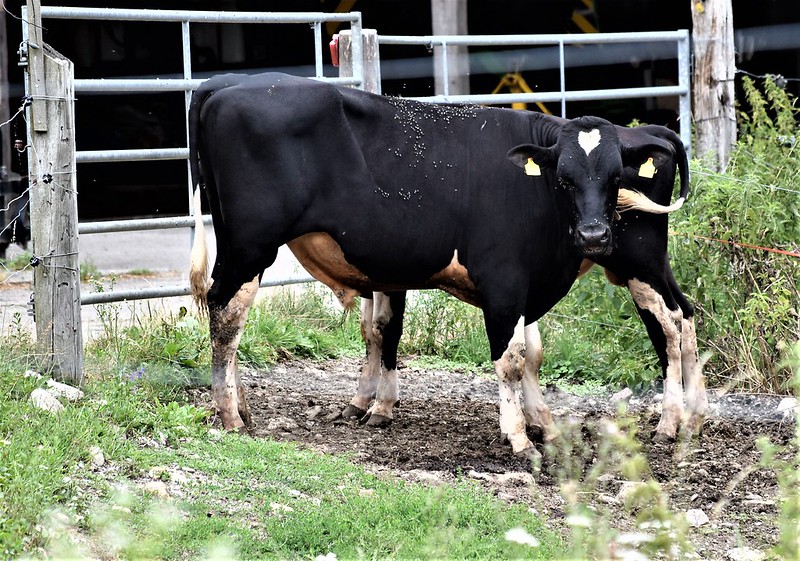 Actually there were two cows, one was hiding  behind the other one.

So I moved on to the chicken run. 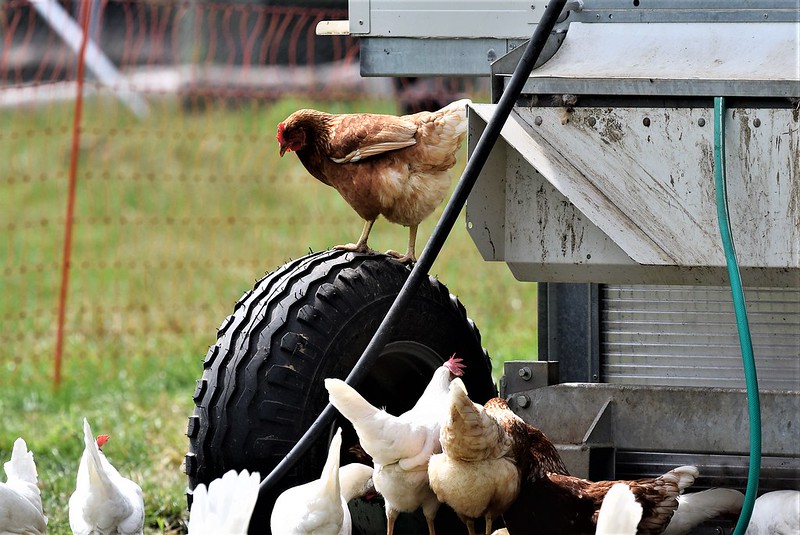 One of them was holding a lecture about laying more eggs, otherwise their days might be numbered in the laying shed. Only good hens lay enough eggs to prevent them from arriving in the soup, she said. And all the others clucked in agreement. The rooster was listening, but decided hen is hen and as long as they do their job, he can do his.

I wheeled on home eventually. I discovered I had 150 photos on my camera, but it seems I did not clear the memory the last time, so it was eventually just 70 new photos. I keep many in the archives for perhaps a challenge session on WordPress. 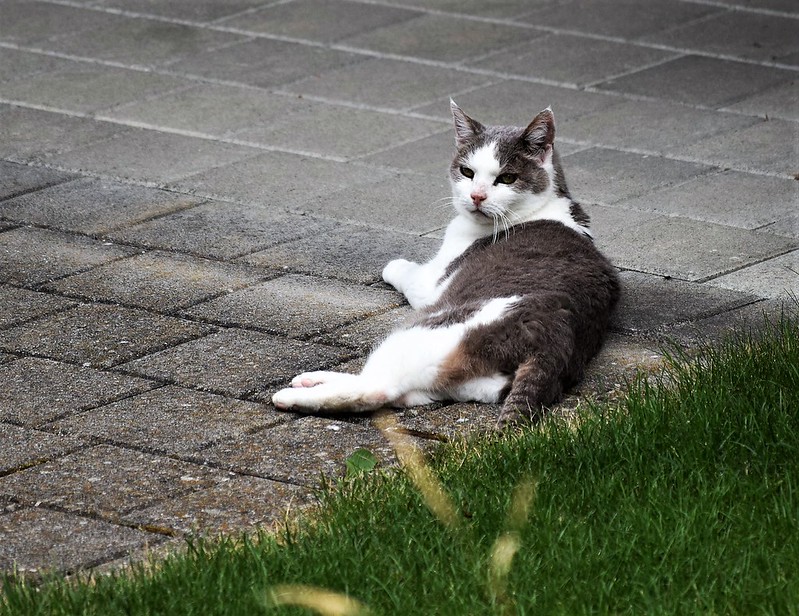 As I turned into the home run, I saw that Bubu was laying outside his apartment building. He lives on the first floor, but the human that he owns always has a cushion outside for him. Today he decided to rough it a bit and lay on the tiles, even those cats on hot tin roofs have to cool down now and again. Sometimes he might take a walk through our Tabby’s territory, but she just watches with suspicion. This cat is to be avoided at all times when possible, he is quite the boss.

Today is again a shopping day, although at the moment we seem to be living on air  and love (we say “Luft und Liebi” in Swiss German which sounds better). My No. 1 son is away and we have far too much bread and leftovers from the meals. I will have to reduce the amounts we buy. We eat, but golden oldies eat less. I am fed up with eating semi stale bread for breakfast.

Look after your computers, remember to empty the bread crumbs between the keys now and again (one of my problems after eating breakfast) and enjoy the day. I must now move on, my vacuum cleaner is impatiently waiting with a mop. I will leave you with a view across the fields to the Jura mountains with some angry clouds gathering, from yesterday’s wheelie, although the clouds were just mumbling to themselves and stayed where they were. 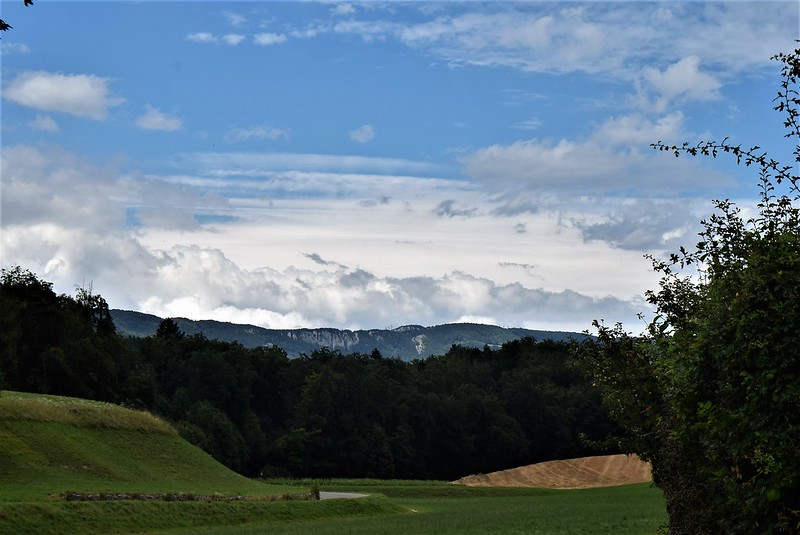