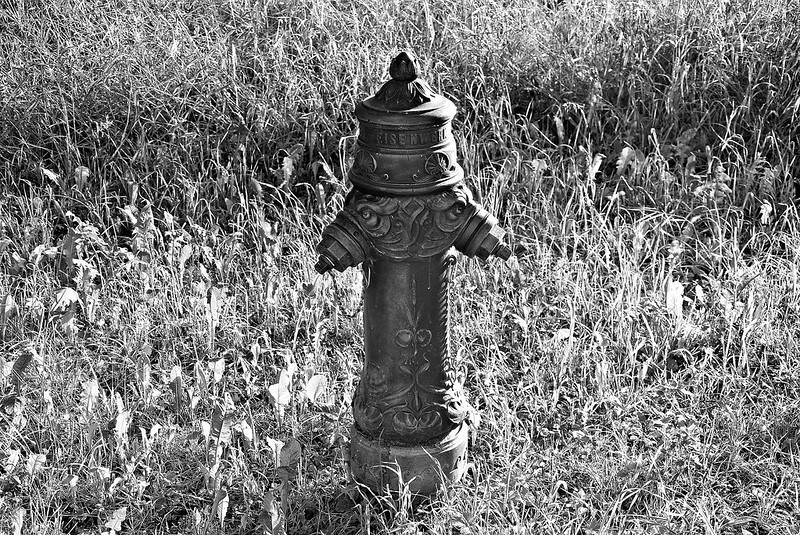 I found this hydrant in a field in our village near the path. I just had to take a photo. It must be something from the dark ages of fire drill I think, the antique in the meadow. 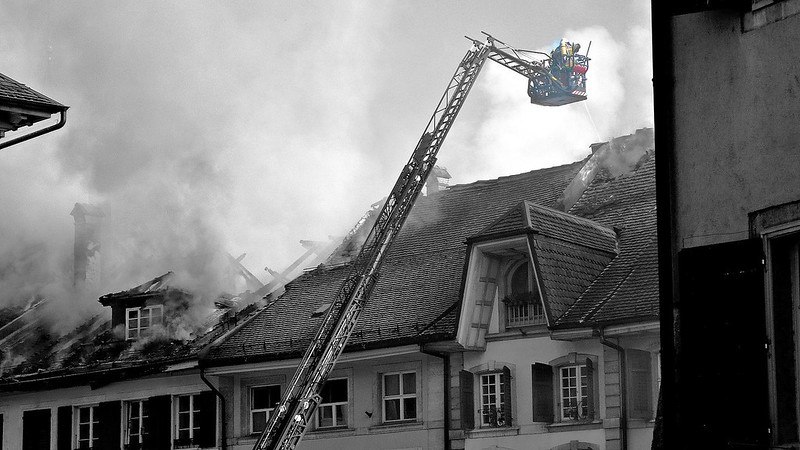 I will never forget this one. It was March 2011 and I had a dentist appointment. As I left the dentist to walk through town everything was closed and the firefighters were at work. The attic in one of our old town houses was on fire and it had spread to the houses next to it. These houses are protected as relics from the earlier days and had been recently renovated. You see even 7 years ago I was walking around with a camera in my bag and naturally shot a few photos. Just to add that since the roofs have long been repaired and you would never notice that there had been a fire. 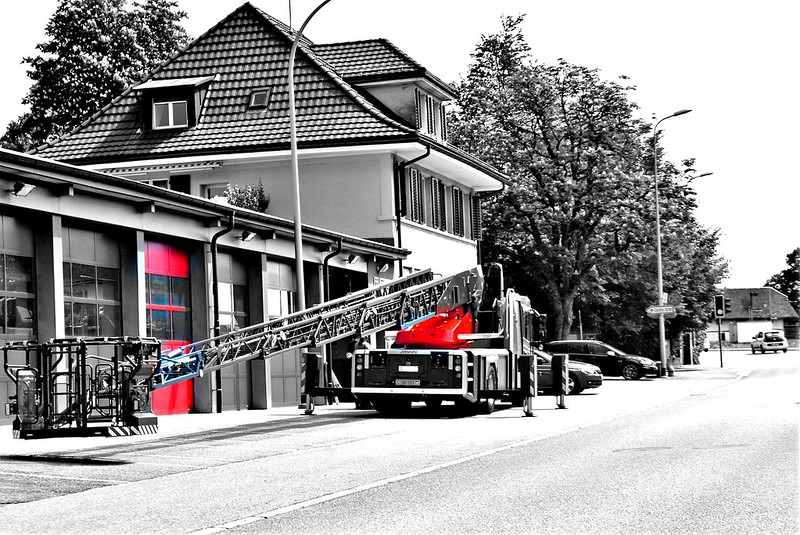 This is the fire station of Solothurn in Switzerland. We drive past every time we go shopping. Sometimes there is something happening outside and sometimes the doors are closed. I usually take a photo when we drive past if there is anything there. Why is it that fire stations and their apparatus are always in red? Must be international. 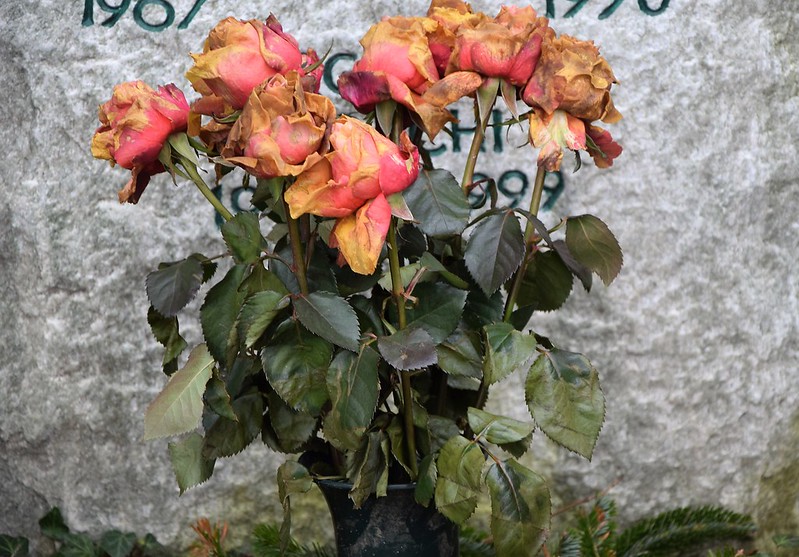 Not the normal beautiful fresh rose. The were left  for a while in the graveyard, but they seem to be in the right place at the right time – gone but not forgotten. 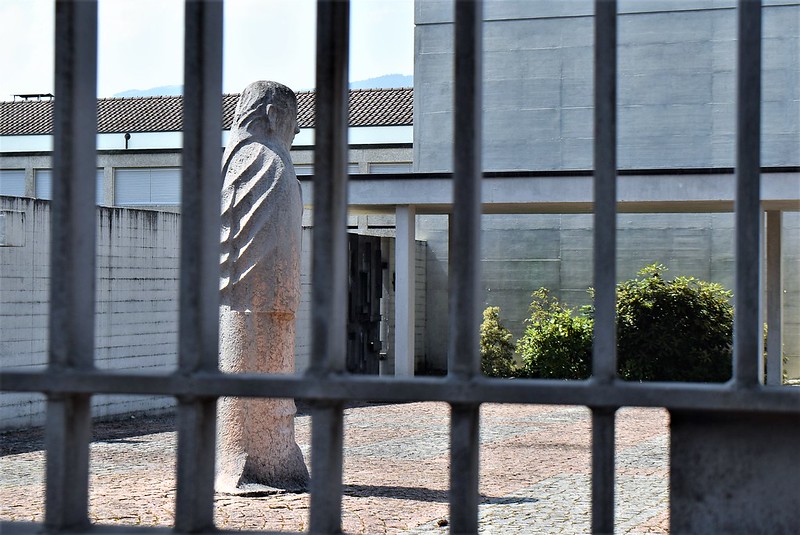 Looking through the bars of the gate the figure stands there: an expression on its face that no-one has ever seen because it is always looking in the other direction. You can try it from a different angle, a little to the right perhaps, but there is nothing more to be discovered. Not a trace of recognition and it refuses to turn its head, but looks always towards the entrance. Is it a lady or a man? I always thought a lady, but this is a convent belonging to men.

It has been there every day since at least the 50 years I have seen it. Other buildings have come and gone, the road outside has changed its shape now and and again, but it still remains, firm and as strong as the rock it is built from.

Who is it and what does it want? It stands at the entrance to a monastery. Perhaps it is still waiting for a friend to return to its worldly position, perhaps it still hopes that a memory remains.

This statue always fascinated me since I have been living in this town firmly anchored in the roman catholic beliefs. There is a cathedral and a convent and this is at the entrance to the convent, a lonely statue. On internet you see all I thought, but there was no reproduction of this statue, at least I did not find it. You only find photos of what is on the other side, but the the statue  remains a without a trace. 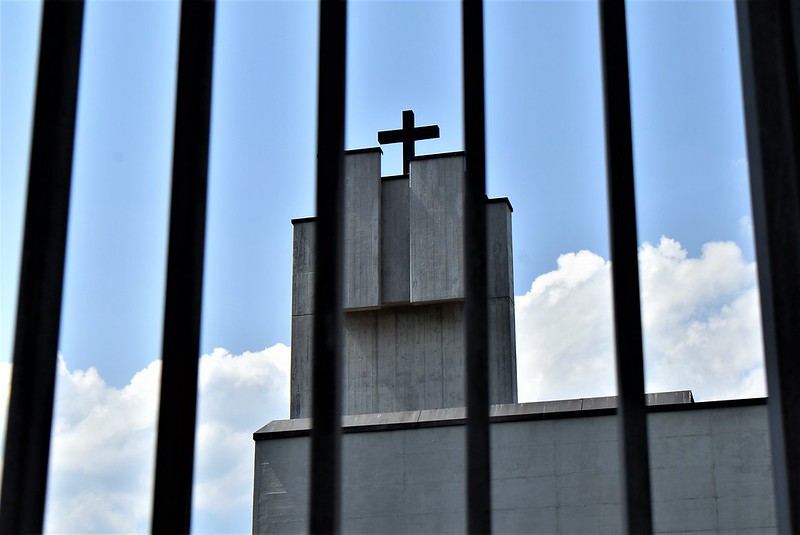 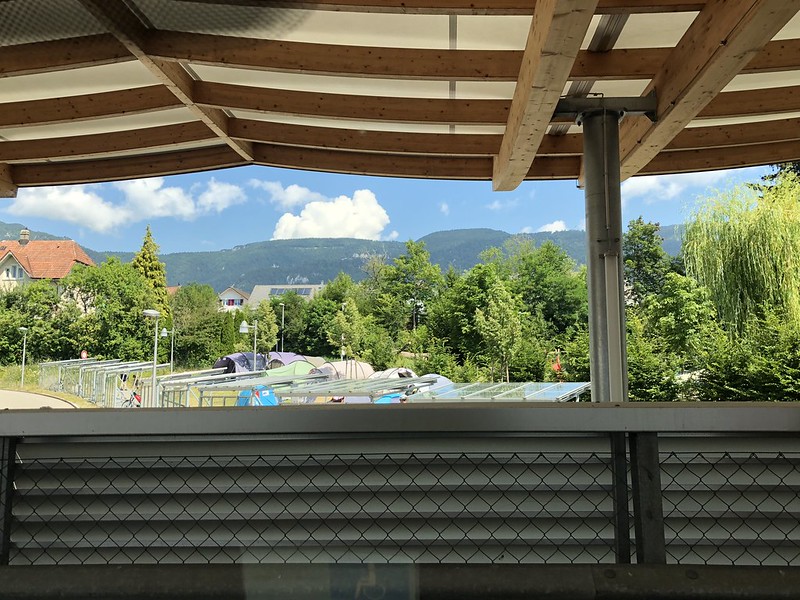 Even the view from the car park at the supermarket can be appreciated, almost cinemascope.  Yesterday was a sunny day more or less but in the night the rains came. Both me and Mr. Swiss were awakened around 3 in the morning by crashes of thunder and torrential rain hitting the garden outside. If we were not so tired we might have thought that the end of the world was nigh. My last thought when I fell asleep again was that at least I will not have to water the garden today. 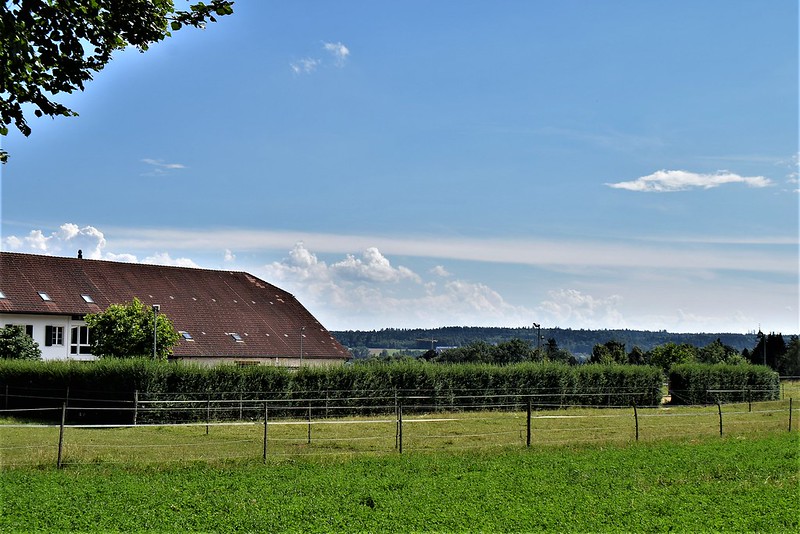 Yesterday morning was a trip to the supermarket and I was undecided for the afternoon. After my midday sleep I was still pondering whether to go for a wheelie in my chair or not. If I stayed at home I would see nothing new and do nothing interesting. On the other hand if I go somewhere, where shall I go. I have had enough escapades with distant targets on my trips lately, but I decided to go somwhere. Mr. Swiss found it a good idea. Do I sometimes have the feeling he is glad that I disappear for a couple of hours? although his parting words were: call me if it becomes a long journey. 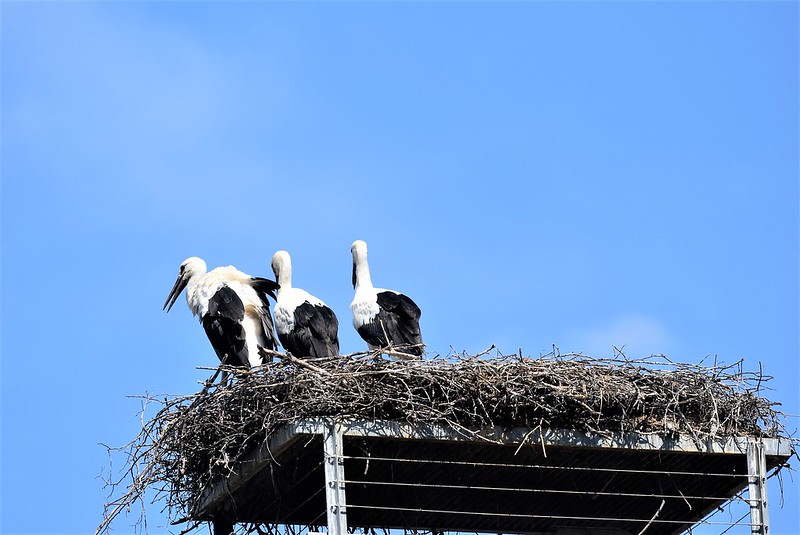 This meant wheeling past family stork on my way. they are still there and it seemed to be mum (or perhaps dad) and two kids. Now and again there might be one or two less and sometimes just mum and dad. It seems the babies are not longer babies after discovering they have wings for a purpose now and again. I love these birds as long as they don’t fly over my place and drop their recycling matter everywhere. 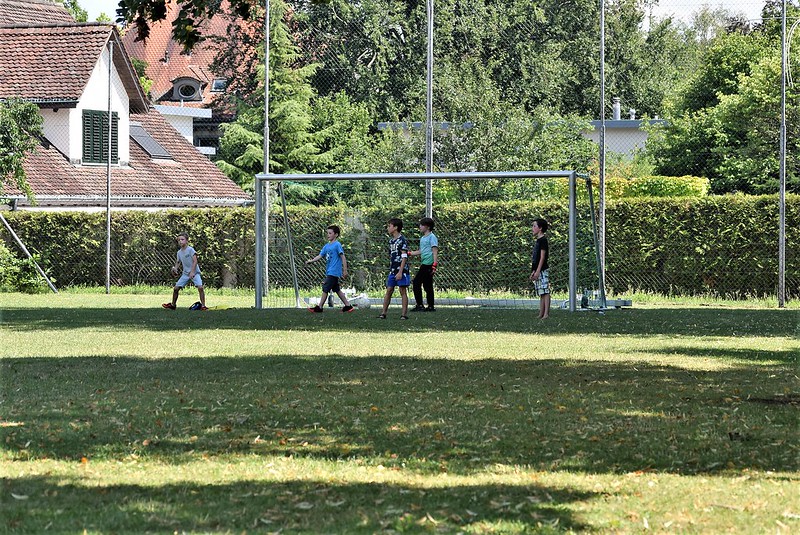 I noticed there were some kids having a football practice at the field next to where the storks are nesting. At the moment football is not such a good theme in Switzerland. Somehow our national team got further in the finals of the World Football Cup in Russia and naturally lost their important match to everyone’s disappontment. It would have been nice to see Switzerland achieve more, although a cup win would not come into the question against all those other super teams, but when your national hope lose a match due to an own goal of one of its players, then you really can ask if it would be worth it. In the meanwhile England are showing themselves from their best side and have moved on further. After many years of dithering around, it seems they have pulled themselves together. I have not spent very much time on watching the matches, but more a bit on the edge. 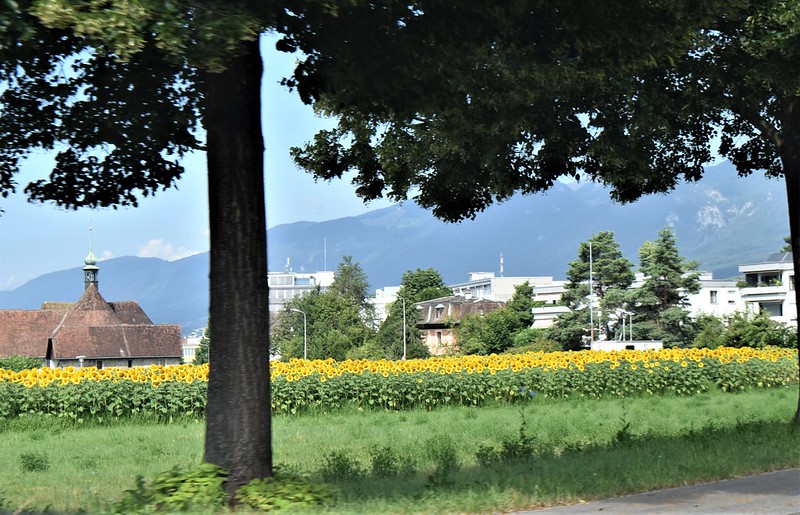 I noticed as we drove to the supermarket yesterday our fields of sunflowers are still there on the way: summer is a great time for flowers and colour in the landscape.

At the week-end No. 1 son is off again on his annual two week holiday to Jesolo in Italy. He goes with a special group for handicapped, he is autistic, and since at least 10 years. He knows most of the people and has good care whilst he is there. During the day he is mostly on the  beach, or they have various visits, sometimes to Venice. In the evening he is allowed to go on his own into town to enjoy the various entertainments in the restaurants. He is quite independent and organizes the packing, money etc. all on his own before he goes.

It has now cooled down outside, and I have not yet decided on today’s adventures. There is no shopping to do, so just a nice quiet reaxing golden oldie day I hope your day is not so stressful, enjoy it and I leave you with some hollyhocks I found growing in our area. 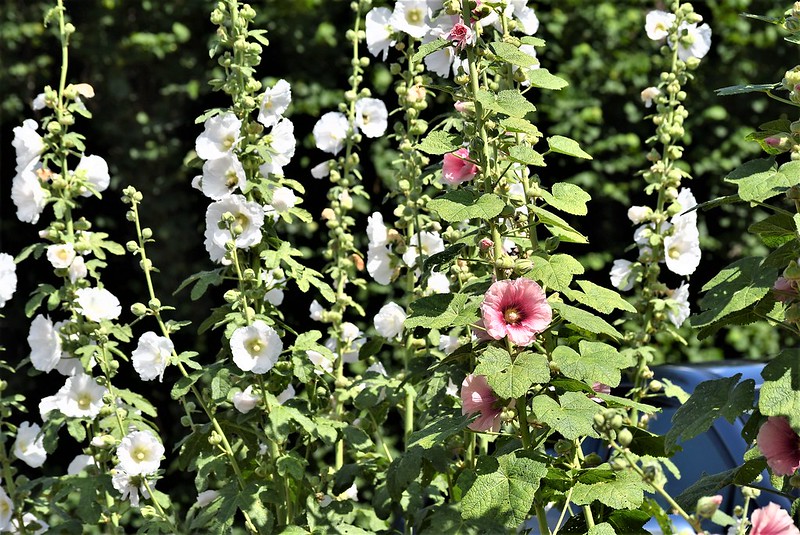