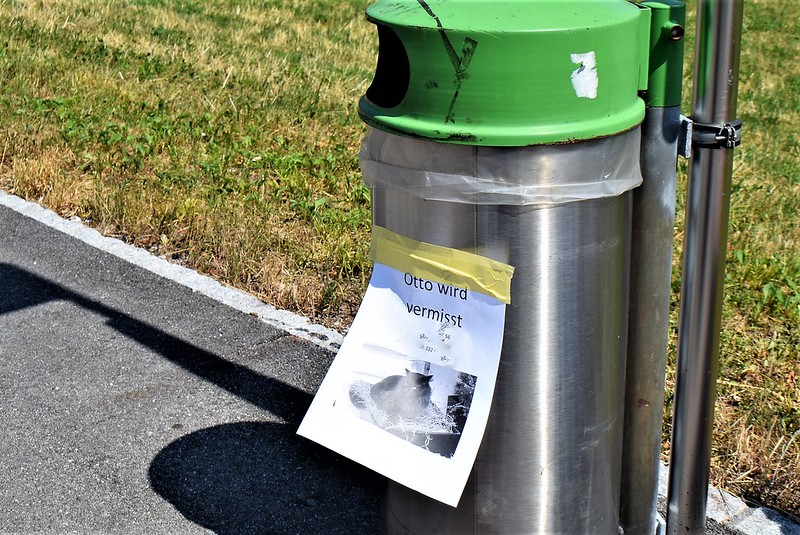 I was on a wheelie in my chair taking photos of this and that and suddenly I saw this poster taped to a garbage bin. As we all speak german here, it was in the German language and tells us that “Otto is missing”. Otto seems to be a big black cat and someone was keen to get him back.

I remembered our little blind cat Fluffy, who has been living his 10th life in the eternal corn chambers catching mice for a few years now, but one day Fluffy did not come home. He could then see, as had not yet had his accident, but he went missing. We also made a poster something like this, hanging it on a few trees in the neighbourhood and even posted it in Internet on a special site we have for missing animals in our area. We reported to the local radio station and they said they wait three days, but would report it. 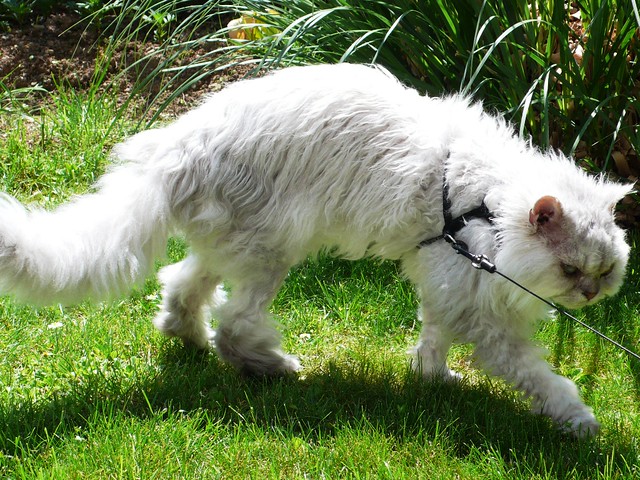 Two days later in the afternoon Fluffy suddenly appeared again in our home. He was cuddled and spoilt and looked OK, although he did not tell us where he was. He spent a few hours eating and drinking and then slept the rest of the day. We were particularly bothered as on the first evening he had disappeared there was a terrific thunderstorm. We can only think he got trapped somewhere, perhaps locked in a garage or something, and could not get out until someone released him.

Imagine my surprise today when I noticed a small headline in the local newspaper with a photo of Otto the missing cat and the headline “Who has seen the local town tom cat?”. Since 17th June he has disappeared without a trace. Since 7 years he belongs to our town of Solothurn and is known as the “town cat”. You see him here and there and is always in charge, even disregarding noisy dogs, he is the king. Often you see him in a shop window or between goods in a shop.

Of course he is not just a cat, but actually belongs to one of the more prominent town families and so they have distributed the posters about their missing cat. They even employed an animal communicator (whatever that is) who said that Otto lives and someone has taken him. The family are sure he will return. He once disappeared for a year and was found in a village about 20 kilometers away. Otto has a chip. He always reports at 6.00 a.m. at the villa of his family in town. It seems not only his family would be keen to find him again, but the whole town. My Tabby is already jealous that this cat is getting so much attention. Of course I will keep you informed how this mystery develops.