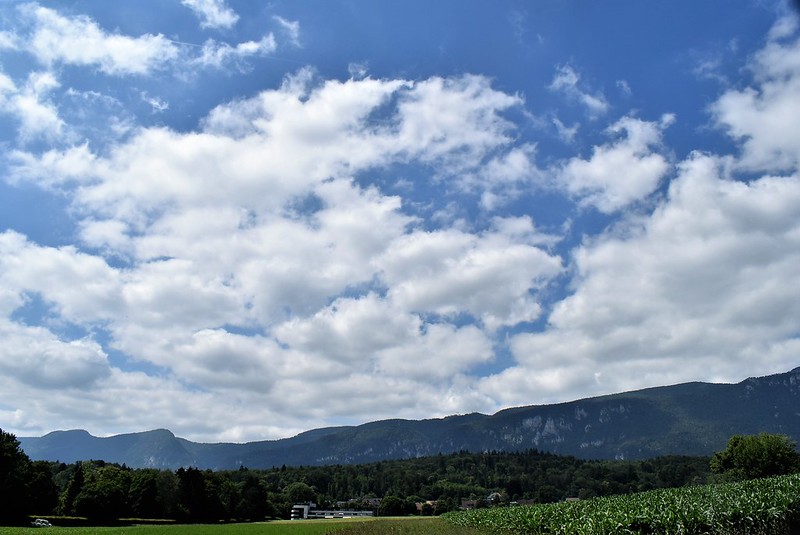 A photo from my excursion yesterday afternoon. The clouds gather more in the afternoon and give some intersting contrasts over the Jura mountains behind our home. The morning skies are more plain and simple, this morning blue with some wispy clouds. The only noise we hear is the builders opposite on the scaffolding working on the facade of the block. It looks like another sunny day today in Feldbrunnen Switzerland and I will make the most of it. Mr. Swiss tells me that I am getting quite a sun tan. Who would have thought that driving a wheelchair is to be compared with a day on the beach. I am even wearing shorts now on my journeys. 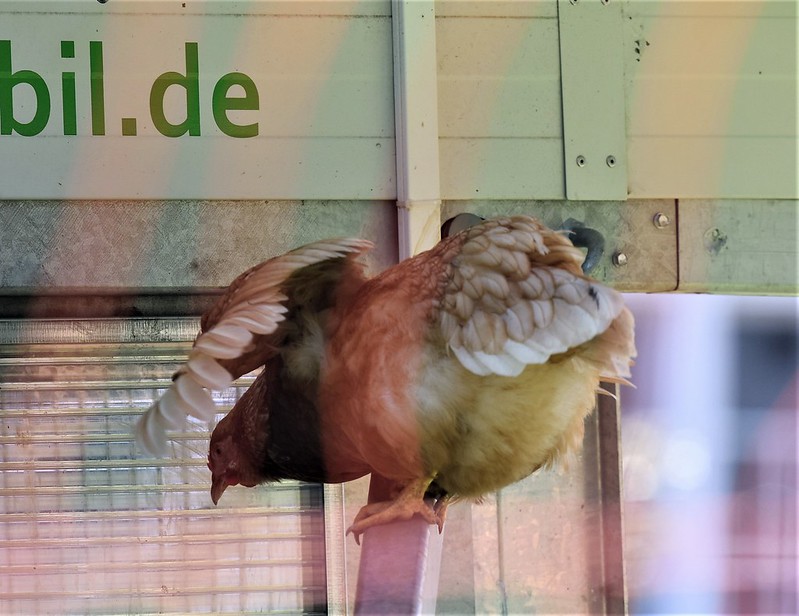 It was another trip to the chicken farm to begin with. They are near, just across the road. This chicken could not decide whether to leave her higher perch or not. Even chickens can fly if they want to. They were all clucking away in a large group and now and again the rooster would give out a few announcements to his ladies about staying together and making sure that they were producing enough eggs. 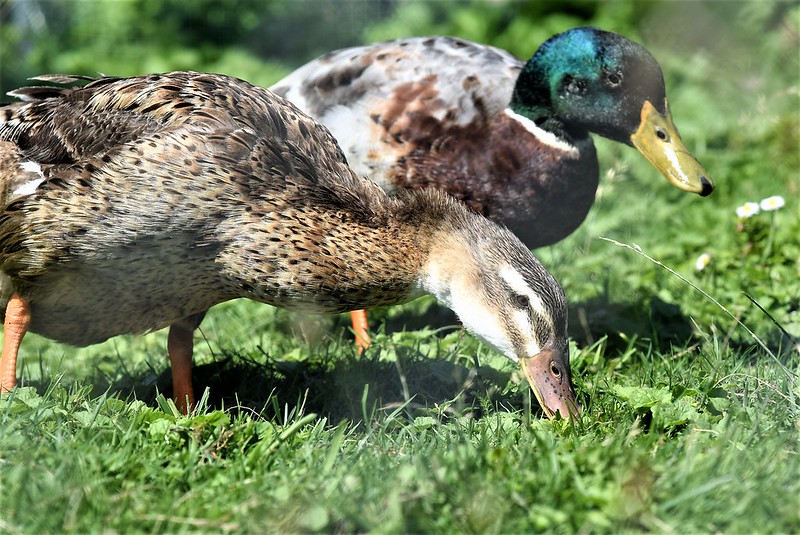 The ducks were also busy picking in the grass. As I was taking photos a young lady passed by on her bike and mentioned that it was a shame there was a fence around everything which would be in the way when taking photos. I told her it is less a disturbance with the zoom lens, but otherwise there are always traces on the photos. She found I could ask if they would let me in the compounds to take closer photos. The problem is that I rarely see anyone in the compound and if they let me in I am not sure how the ground would be for my wheelchair, although it looks OK. If I can ride the river bank with all its stones and gravel, then it should be possible.

I wheeled on over the castle and returned via the graveyard. I mentioned to Mr. Swiss that although I am a regular visitor at the cemetery I never see any funerals. He said they are usually in the morning, which explains. My trips are afternoon visits when the business has been done and I only see the floral offerings on the fresh graves. I am becomming an expert. Buitterflies are now becoming more common and I saw this one in the cemetery. 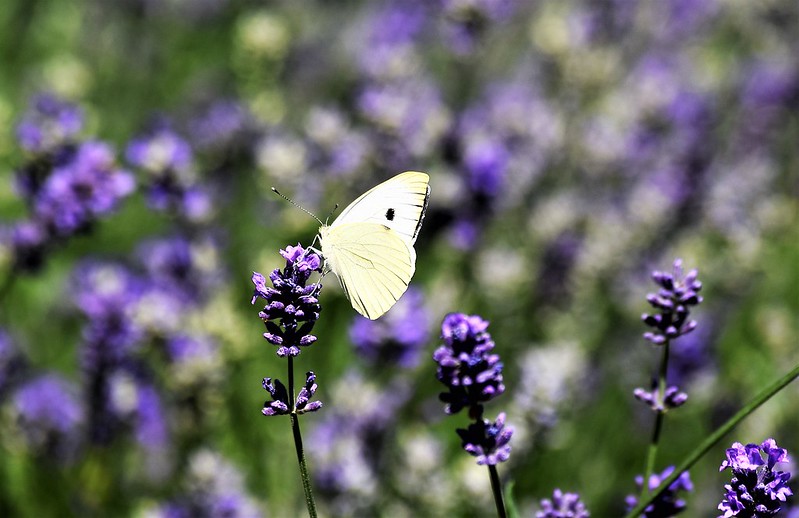 Nothing special, but I followed it with my camera and waited for it to perch and keeo still for a photo.

Talking of insects and photos, I am now getting quite adapt at taking photos of the various arrivals on the porch at home, especially if there is food around. 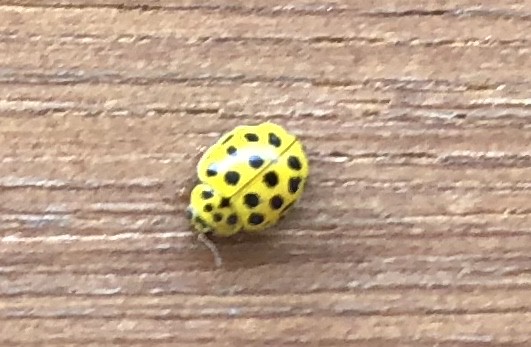 I saw this colourful bug on the table on the porch. It was very small, hence the blur effect due to my enlargement, but I take these photos with my telephone camera, although the iPhone X camera is very good, but that also has its limits. I discovered this is a cucumber beetle and I have no idea how it got to my porch. I have no cucumbers in my garden and neither do the neighbours. They can become quite a pest according to what I read in Internet.

I should now move on. It is week-end shopping day and time to show myself in the supermarket. The list is made and all we now have to do is buy. Afterwards it is the week-end again. Why does it seem that life is full of week-ends when you are a golden oldie, although I am not complaining. I had enough days when I had to get up early in the morning and be in the office daily. Shopping, cooking and cleaning were just things you did at the week-ends, which was not really a week-end, but just two days at home to work in the household. 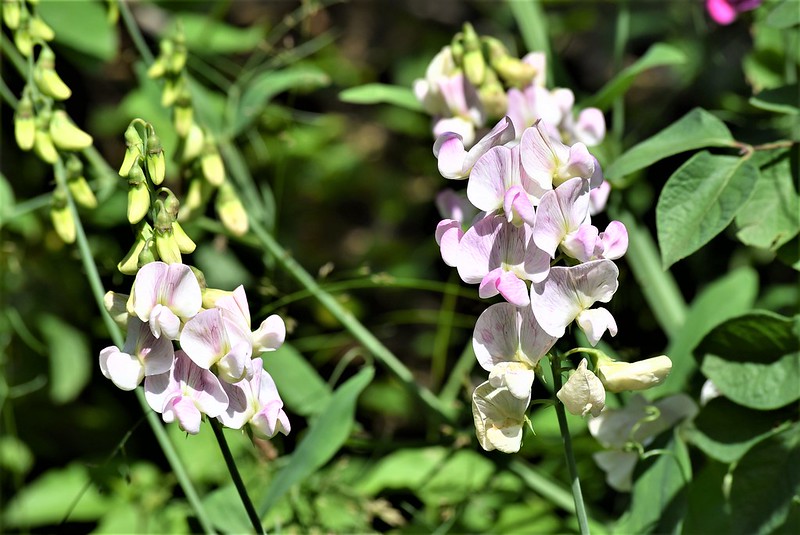 I will leave you with some sweet pea growing opposite my garden, which probably come from the seeds distributed by the wind from my own plants growing in  my hedge. I love these flowers. Generally that are just a darker mauve, but now and again they have contrasts in colour.