Yes I have a pickle story. It all began when I saw the film “Goodbye Lenin”  set in East Berlin just after the German Reunification . At last East Germany was free from communism and its restrictions on daily life. Families were reunited in the East and West and everyone was happy. However in this film there was an elderly lady who was a follower of the East German regime and was ill. Out of consideration for the mother’s illness her son thought it better to hide the fact that Germany was now re-united and so they pretended everything was as it was. If you follow the link to the film you can see the details of the story. It was an amusing film, but had its sad bits and pieces. 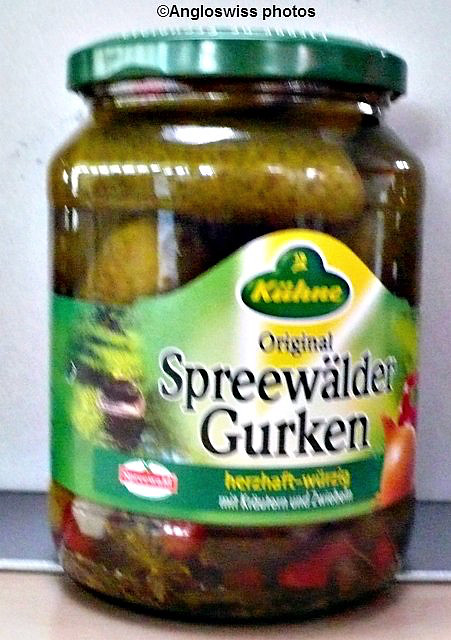 At this time I was working as an export clerk in a company in Switzerland and we had many new agents in ex East Germany which I was taking care of. These agents spent some time in Switzerland for their training and I got to know them very well. I mentioned the Spreewald pickled cucumbers to the agent from Berlin and whether they were as good as said. He said they are excellent, was honoured that I had heard of them and promised to bring a glass the next time he visited. He visited often and every time he brought a jar of Spreewäldergurken. They came in many different varieties with various spices and flavours and they were very good. Of course everyone in the office wanted to try them and so my jars of Spreewäldergurken were divided amongst my colleagues. Now and again I smuggled one home and Mr. Swiss who also discovered their excellent qualities.

My working days are now long over, but the pickled cucumbers of the Spreewald in ex East Germany will never be forgotten. They are still being produced in the Spreewald and remains one of their main products.