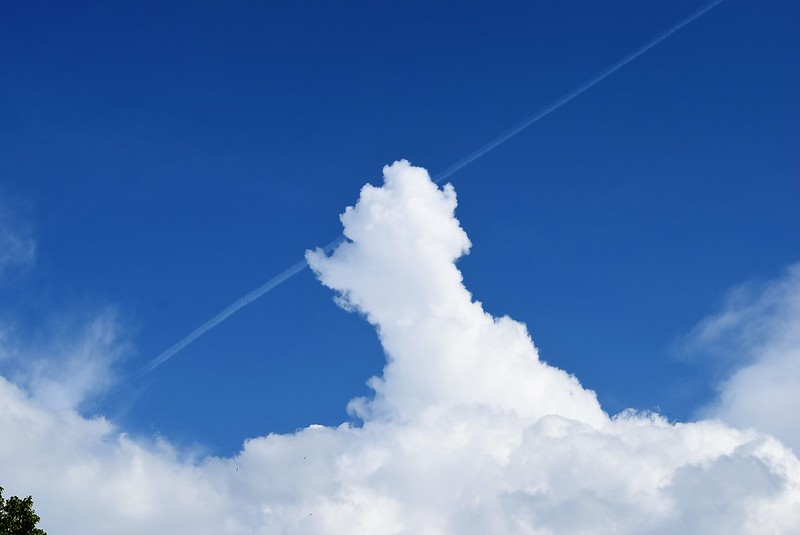 I usually have my head in the air when I go for a wheelie in my chair. I assume that I remain on a straight path if I steer for straight ahead. I am a cloud watcher and even get a little disappointed when there are no clouds. Yesterday I was rewarded when I saw this cloud hand reaching to stop an aircraft that was zooming past.

The cloud missed and the aircraft continued on its journey and probably did not even notice the danger that was looming from the sky. I took a photo as it might have been important when the news story was printed “Disappearance of long distance flight over Switzerland”. Through the lens of an observant reader, Mrs. Angloswiss, the moment of impact was caught on camera. I could have become famous, the winner of a Pulitzer prize.  Just imagine if the cloud hand had closed around the plane. Of course this is only an assumption, as we know that clouds are not a solid mass. It was only when I arrived home and uploaded this never to be forgotten photo of an action cloud I realised how dangerous flying can be.

Today my No. 2 son flew to Luxembourg to one of those meetings he has now and again. He always sends me a message from the airport before boarding to let me know where he is in the world (thoughtful son). An hour later he sent me a video taken on his mobile phone showing the wing of his plane as it cruised along the runway of the airport in Luxembourg on its landing. Both me and Mr. Swiss were reminded of the days when we would be travelling. I would visit my dad in London at least once a year and Mr. Swiss was also a travelling business man in his working days. Just the sound of the plane cruising and the flap on the wing closing, together with the recording of the hostess in the cabin telling the passengers to keep their seatbelts fastened until the plane stops. Memories of the days gone past. We both got a little nostalgic.