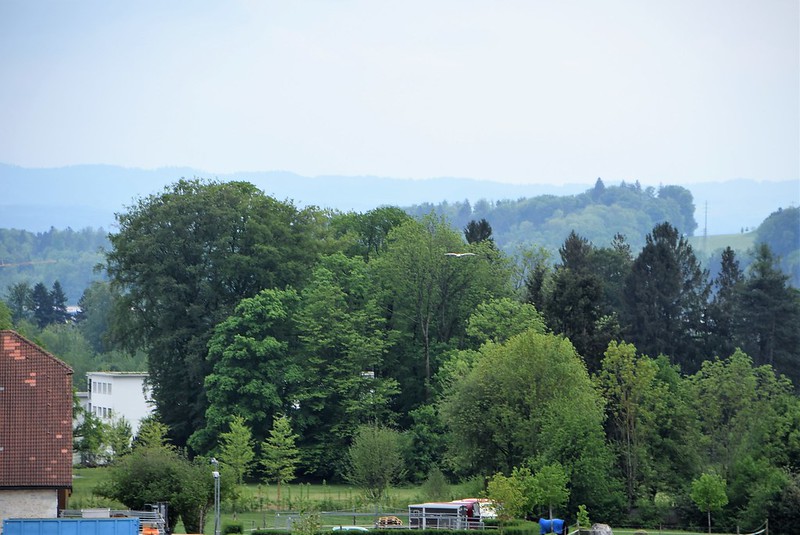 Can you see the stork in the photo.  It is winging its way towards the Bernese Middleland. The white building in the background is part of the estate where I live. Now this stork is flying in the right direction. The stork that dropped me into Bethnal Green, in the East End of London in 1946 probably lost his way in the smog of the London streets. I arrived in the wrong place and stayed for 20 years. It should have continued on its journey to Switzerland, where I have now been living for the past 51 years, because that is where I belong.

The streets of London with their smell of damp concrete after the rain was never something I treasured. I would escape when I could and take a train to the greener areas. I was so annoyed with that stork.

It took some time, but eventually I found where I should have been dropped. I was now in my twenties when I arrived in the green fields of Switzerland. I looked around and eventually arrived in a little village with about 900 human inhabitants and almost as many cows, hedgehogs, some ducks, horses and yes storks, although they lived in another village. They have a colony but like to fly around to see where the next baby should be delivered. I am now in the most perfect place. I do not need a big town, if a river runs through it it is OK. I have my river at the bottom of the path, a castle on a hill and it is all surrounded by trees, and flowers, with forests to complete the bliss.

Photo Challenge: Place in the World

12 thoughts on “Photo Challenge: Place in the World”